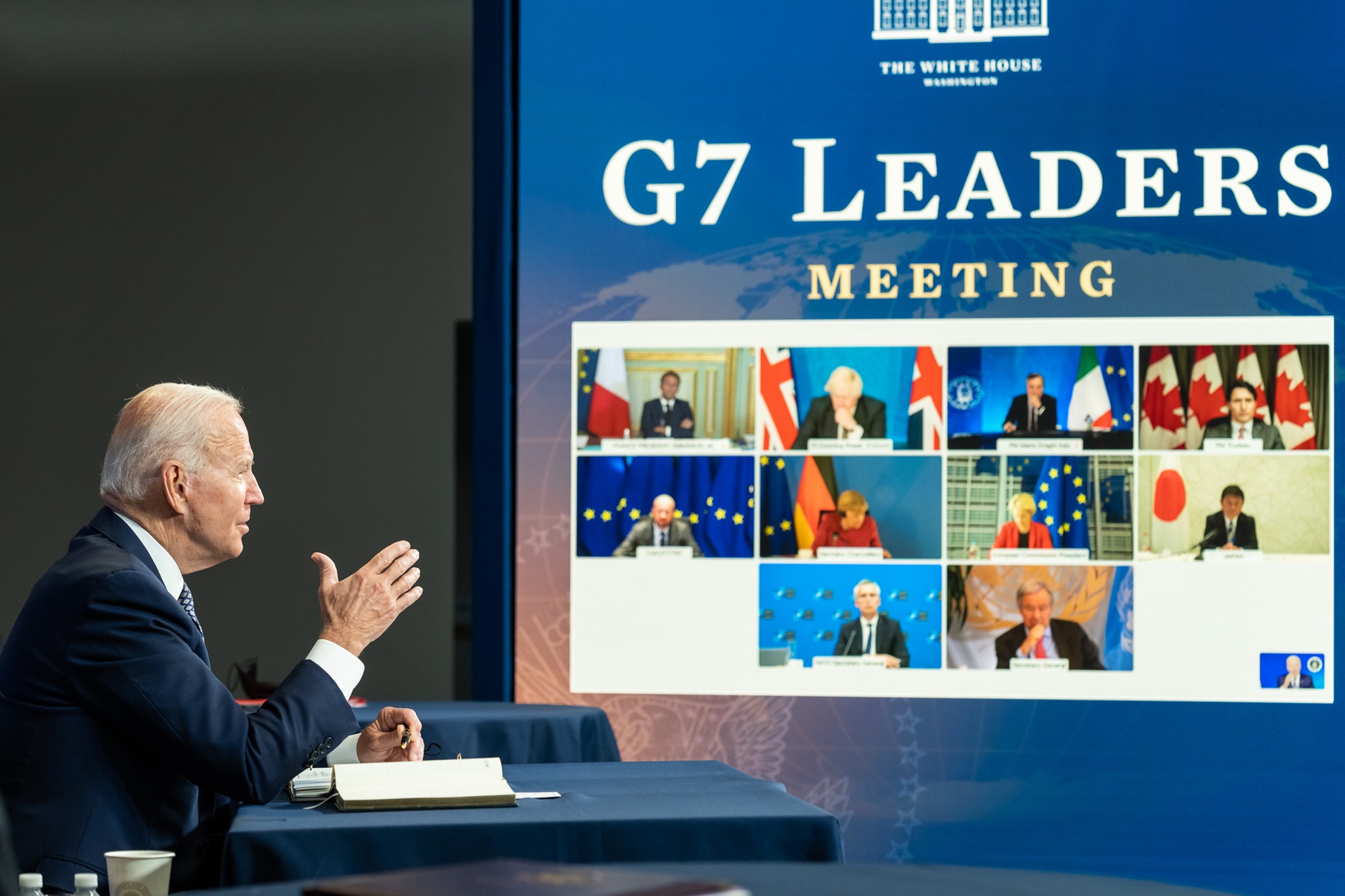 “After hours of infighting, House Democrats on Tuesday struck a deal that would approve their $3.5 trillion budget resolution, set up floor action on the bipartisan infrastructure bill by Sept. 27 and advance voting rights legislation,” Axios reports.

“The agreement allows all sides to say they got something, though none can claim a total win.”

Politico: “Democratic leaders are finalizing a deal that would clear the way for passage of the $3.5 trillion budget framework and set a House vote on the bipartisan infrastructure deal for Sept. 27, an offer they hope ends a weeks-long standoff with moderates.”

“After several hours of furious negotiating Monday night, Speaker Nancy Pelosi and her team are finishing the compromise, which they hope to put on the floor as soon as Tuesday afternoon.”

Said Pelosi, in a private caucus meeting: “I’m sorry that we couldn’t land the plane last night, and that you all had to wait. But that’s just part of the legislative progress. I think we’re close to landing the plane.’

As soon as the budget reconciliation resolution passed the House of Representatives, the Congressional Progressive Caucus issued a statement: “We will only vote for the infrastructure bill after passing the reconciliation bill.”

Punchbowl News: “When asked about the new end-of-September deadline, Rep. Alexandria Ocasio-Cortez said she views the two pieces of legislation as being tied together, and indicated her vote on infrastructure is contingent on a reconciliation package being ready for a vote.”

President Joe Biden is sticking to the deadline he set for evacuations from the Kabul airport, leaving less than a week to fly out thousands of people from Taliban-controlled Afghanistan, Bloomberg reports.

“The decision means he rebuffed calls from the U.S.’s closest allies to extend the Aug. 31 deadline.”

Washington Post: “While Biden has resisted committing to changing his departure deadline, his aides are increasingly preparing for such a step. Officials said Monday that an extension, if authorized, would probably have a narrow focus on evacuating remaining Americans, not the much larger group of Afghans who want to escape.”

“CIA Director William Burns held a secret meeting in Kabul on Monday with the Taliban’s de facto leader Abdul Ghani Baradar in the highest-level face-to-face encounter between the Taliban and the Biden administration since the militants seized the Afghan capital,” the Washington Post reports.

“The Taliban said Tuesday that the group will not allow Afghan nationals to leave the country, a development that comes one week before U.S. and coalition forces are slated to depart Afghanistan,” CNBC reports.

Said a spokesman: “The way to the airport has been closed now. Afghans are not allowed to go there now, foreigners are allowed to go but we have stopped Afghan nationals to go because the crowd is more, there is danger that people will lose their lives, there might be a stampede.”

“The U.N. human rights chief said on Tuesday that she had received credible reports of serious violations committed by the Taliban in Afghanistan, including ‘summary executions’ of civilians and Afghan security forces who have surrendered,” Reuters reports.

Wall Street Journal: “The State Department doesn’t know exactly how many Americans are left on the ground, although some have estimated that between 10,000 and 15,000 were there when the evacuations began.”

“President Biden’s national security adviser Jake Sullivan said Monday that the exact number had been hard to assess because many Americans didn’t register with the embassy when they arrived in Afghanistan, and many didn’t deregister when they left.”

A Virginia judge has dismissed the second of two lawsuits Rep. Devin Nunes filed against a Republican political strategist who he claimed spread defamatory information about him leading up to his 2018 reelection campaign, the Fresno Bee reports.

Said Mair: “It is ridiculous that we have had a sitting United States congressman suing a fake farmyard animal, let alone me, for being mean to him on Twitter.”

Associated Press: “Taking over on short notice for a scandal-plagued predecessor in the midst of the coronavirus pandemic, New York Gov. Kathy Hochul began her tenure Tuesday with more than enough challenges for a new administration. She also began with an historic opportunity: Hochul is the first woman to hold one of the most prominent governorships in the U.S.”

“A century after women gained the right to vote, 19 states still have never been led by a woman. That includes some of the most populous states, such as California, Florida, Pennsylvania and Illinois.”

“Women currently hold 18% of governors’ offices — significantly less than this year’s new records of 27% of U.S. congressional seats and 31% of state legislative seats.”

Said Jones: “Shame on you, Trump. Seriously. Hey, if you don’t have the good sense to save yourself and your political career, that’s ok. At least you’re gonna get some good Republicans elected and you know, we like ya. But my god. Maybe you’re not that bright. Maybe Trump’s actually a dumbass.”

Dr. Anthony Fauci told CNN the pandemic could be under control by next spring — but only if enough Americans get vaccinated before then.  Said Fauci: “We hope we’ll be there… but there’s no guarantee because it’s up to us. If we keep lingering without getting those people vaccinated that should be vaccinated, this thing could linger on and lead to the development of another variant.”

The New York Post has repeatedly slammed mask mandates in print—but now the tabloid is telling its own employees they must mask up when walking around the office, CNN reports.

Hawaii Gov. David Ige (D) is telling tourists to stay away from the islands amid a surge in COVID-19 infections, The Hill reports.  Said Ige: “It is a risky time to be traveling right now. It is not a good time to travel to the islands.”

“The House Select Committee investigating the January 6 Capitol riot is poised to send notices to various telecommunications companies requesting that they preserve the phone records of several people, including members of Congress,” CNN reports.

Wall Street Journal: “No longer facing serious military opposition, Afghanistan’s new Taliban rulers are grappling with a new threat: an economic collapse that could fuel renewed challenges to their rule and has already put pressure on them to share power.”

The Guardian: “UN agencies have warned of food shortages to Afghanistan as early as September without urgent aid funding, as it emerged first aid supplies, including surgical equipment and severe malnutrition kits, were stuck due to restrictions at Kabul airport.”

Politico: “American forces and diplomats rushed to destroy their own records on Afghan citizens as they departed, but the rapid takeover of Kabul left large stores of data open for exploitation inside Afghan businesses and government offices. That gives today’s technologically adept Taliban tools to target Afghans who worked with the U.S. or the deposed Afghan government with unprecedented precision, increasing the danger for those who don’t get out on evacuation flights.”

“Much of the attention has been on the race to scrub data off the internet … But those efforts don’t touch the huge collections of data sitting in Kabul. Take call logs. Telecommunications companies keep a record of nearly every phone call placed and to whom.”

Politico: “Biden enters Tuesday’s virtual summit with G-7 and EU leaders facing a wave of frustration from his closest allies and no easy solutions. Leaders in Berlin, Paris, London and Brussels — initially dissatisfied by Washington’s lack of consultation over Washington’s decision to withdraw troops from Afghanistan — are now appalled by missteps in the operation, which they believe has undercut the credibility of Western alliances.”

“But thanks to chronic underinvestments in defense and diplomacy, the European G-7 members have little sway to set a different course. And because of deep divisions over migration policy in Europe, the summit is unlikely to agree on an umbrella policy that would offer protection to the majority of Afghans now at risk of Taliban reprisal.”

Vice President Kamala Harris’ trip to Hanoi was delayed for more than three hours because of “a report of a recent possible anomalous health incident in Hanoi,” CNN reports.   That’s how the government refers to the mysterious “Havana syndrome.”

“With the latest wave of return-to-office delays from Covid-19, some companies are considering a new possibility: Offices may be closed for nearly two years,” the Wall Street Journal reports.

“That is raising concerns among executives that the longer people stay at home, the harder or more disruptive it could be to eventually bring them back.”

“Many employees developed new routines during the pandemic, swapping commuting for exercise or blocking hours for uninterrupted work. Even staffers who once bristled at doing their jobs outside of an office have come to embrace the flexibility and productivity of at-home life over the past 18 months.”