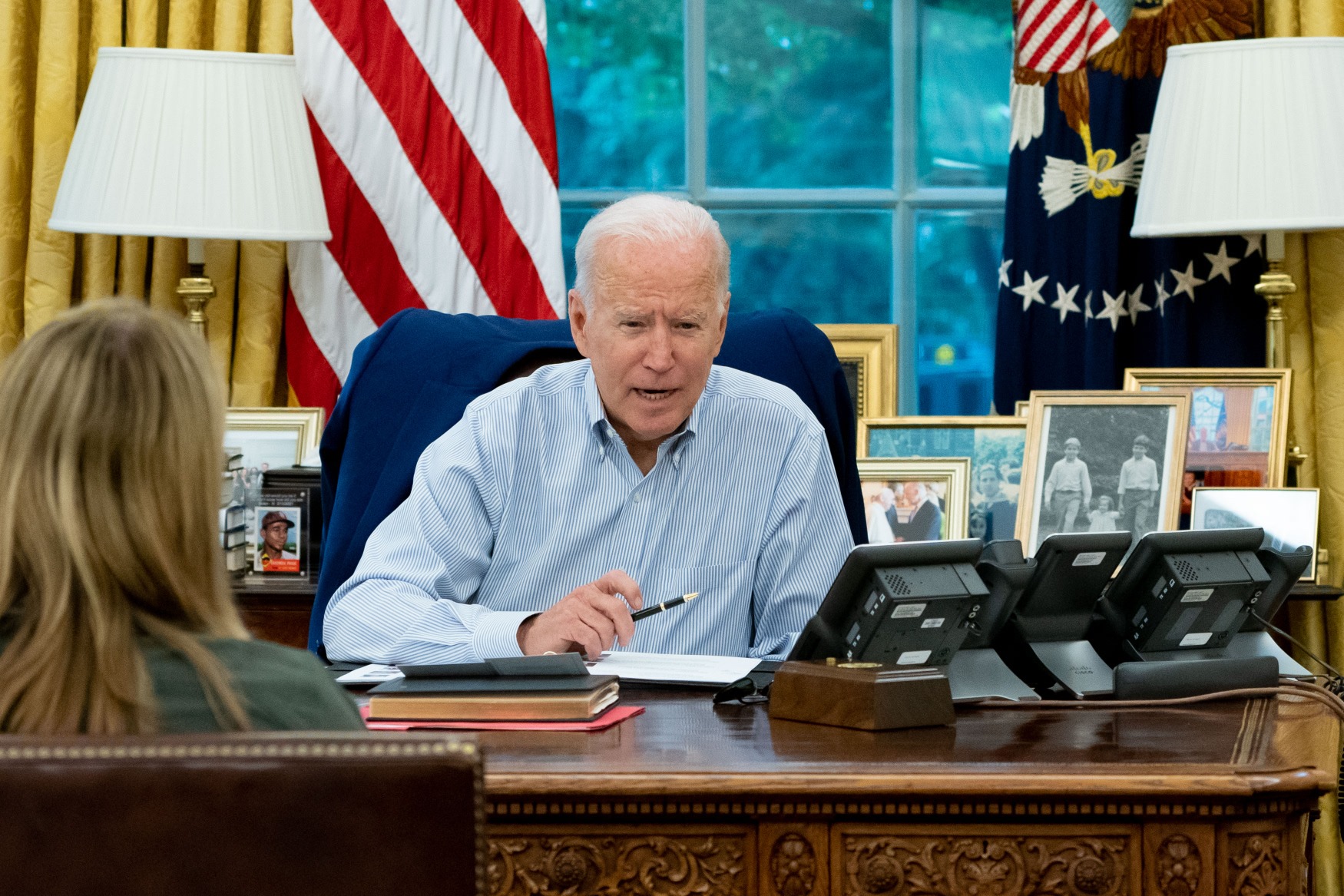 Associated Press: “Despite their dominant military blitz over the past week, the Taliban lack access to billions of dollars from their central bank and the International Monetary Fund that would keep the country running during a turbulent shakeup. Those funds are largely controlled by the U.S. and international institutions, a possible leverage point as tense evacuations proceed from the airport in the capital of Kabul.”

“As of now, the Taliban government cannot access almost all of the Afghanistan central bank’s $9 billion in reserves, most of which is held by the New York Federal Reserve.”

NBC News: “Texas Lt. Gov. Dan Patrick said unvaccinated African Americans — not lax coronavirus precautions in states like his — are responsible for the surge in Covid-19 cases in his state.”

Said Patrick: “The Covid is spreading, particularly most of the numbers are with the unvaccinated, and the Democrats like to blame Republicans on that. Well, the biggest group in most states are African Americans who have not been vaccinated. Last time I checked, over 90 percent of them vote for Democrats in their major cities and major counties, so it’s up to the Democrats.

NBC News: “The Capitol Police officer who fatally shot Ashli Babbitt outside a door of the U.S. Capitol has been formally exonerated after an internal investigation.”

“The Justice Department announced in April that no charges were being brought against the officer. The exoneration by the Capitol Police wraps up the last remaining investigation into the incident.”

Associated Press: “A federal appeals court on Friday allowed the pause on evictions imposed by the Centers for Disease Control and Prevention to remain in place, setting up a likely battle before the nation’s highest court.”

“A three-judge panel of the U.S. Court of Appeals for the District of Columbia rejected a bid by Alabama and Georgia realtors to block the eviction moratorium reinstated earlier this month.”

“The realtors are likely to appeal to the Supreme Court, which voted 5-4 in June to allow the moratorium to continue through the end of July. But Justice Brett Kavanaugh — who joined the majority — warned the administration not to act further without explicit congressional approval.”

Jonathan Bernstein: “There are a bunch of stories that seem to be coming from the intelligence community, from the military, and from the State Department, all attempting to shift blame — for the fall of the government, for the failure to understand what was happening, for poor planning — away from themselves and toward one of the other portions of the government. These aren’t partisan, and reading them as partisan means misreading them. But they certainly are spin, and may well be misleading or even flat-out wrong.”

“Again, none of this is meant to criticize the reporters and news organizations involved. Just to warn everyone: This is probably one of the most confusing information environments we’ve seen for some time. We’ll know more in a few days, and even more in a few weeks.”

Wall Street Journal: “While the Taliban have publicly pledged to respect women’s rights within the limits of Islam, the group hasn’t elaborated on their own reading of it, or made specific promises. Interpretations of Islamic law vary widely, and the possible range of restrictions are causing many inside and outside Afghanistan to fear the worst for women’s freedoms.”

“Already, women are retreating from the public sphere.”

“Young women who were born after the 2001 invasion by the U.S. say their dreams have shattered overnight.”

Wall Street Journal: “Federal Reserve officials are nearing agreement to begin scaling back their easy money policies in about three months if the economic recovery continues, with some pushing to end their asset-purchase program by the middle of next year.”

A federal appeals court ruled Texas can ban the most common procedure used by doctors for abortions in second-trimester pregnancies, the Texas Tribune reports.  The ban is expected to be challenged in the Supreme Court.

Rep. Diana Harshbarger (R-TN) failed to properly disclose more than 700 stock trades that together are worth at least $728K and as much as $10.9 million, Insider reports.

“Cuba’s communist government has introduced draconian rules on the use of social media and the internet after the largest anti-government protests in decades,” the Times of London reports.

“A decree orders internet providers to cut access to those who ‘spread fake news’ or ‘damage the image of the state’ and makes it a crime to incite acts “that alter public order”. The law was published just over a month after thousands of Cubans took to the streets in protests that were convened and spread via online forums, including Facebook.”

New York Times: “The Biden administration announced on Wednesday that it is banning a common pesticide, widely used since 1965 on fruits and vegetables, from use on food crops because it has been linked to neurological damage in children.”

A senior Biden administration official said US policy on Taiwan had not changed after President Joe Biden appeared to suggest the US would defend the island if it were attacked, a deviation from a long-held US position of “strategic ambiguity,” The Guardian reports.

Los Angeles Times: “[Congresswoman Barbara] Lee didn’t know in September 2001 that she would be the only no vote on the Authorization for the Use of Military Force that the House approved, 420 to 1, after the attacks that felled the twin towers of the World Trade Center, left the Pentagon billowing in smoke and downed a passenger airplane in Pennsylvania.”

“She didn’t expect that vote to be a career-defining moment, widely praised as an act of political courage.”

“Nor did she anticipate the death threats and vilification that followed for several years.”