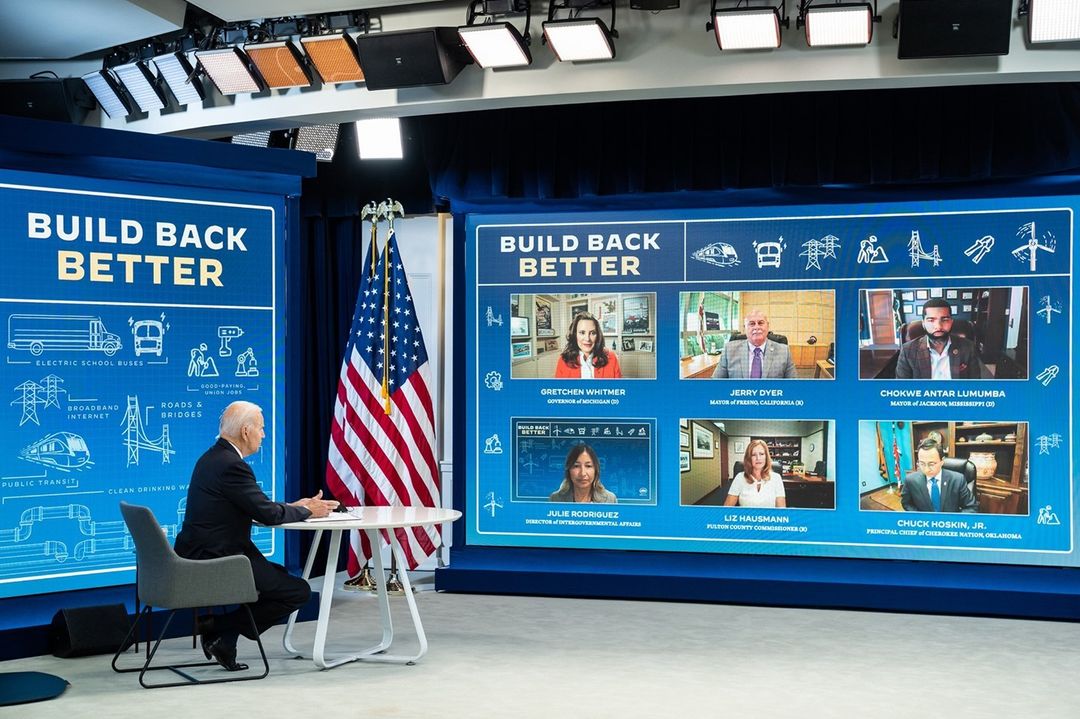 A new Fabrizio Lee poll on behalf of Donald Trump’s Save America PAC finds former NFL running back Herschel Walker (R) taking 54% of the vote in a GOP primary for Senate.

No other GOP candidate polls above 5%.

CALIFORNIA GOVERNOR — Politico reported Thursday on allegations that Alexandra Datig, the former fiancé of conservative radio host Larry Elder, broke off the couple’s engagement after Elder “waved a gun at her while high on marijuana” in 2015. Polls have shown Elder as the leading Republican in the Sept. 14 recall election against Democratic Gov. Gavin Newsom.Carla Marinucci writes that Datig says that Elder “would often become threatening or insistent with her” before this incident. Datig alleges that after one acrimonious talk, Elder “walked over to the nightstand, opened the door, took out the gun.” She continued, “And he checked if it was loaded—while I was talking. He wanted to make sure I saw that he had it,” adding that she ended up locking herself in a bedroom.

Datig says that she signed a non-disclosure agreement after ending their relationship, which she says Elder’s assistant told her “all Larry’s girlfriends did.” She acknowledges she’s broke the NDA by speaking out now because there’s “too much at stake” in the recall election, in which she’s backing another Republican, former San Diego Mayor Kevin Faulconer, over Elder.

Elder has also received renewed scrutiny for old misogynist comments he’s made. Among other things, he wrote in his 2002 book, “Are there legitimate business reasons for a venture capitalist to ask a female entrepreneur whether and when she intends to have children? Hell, yes.” On Wednesday, one day before Datig’s allegations were publicized, Elder said he stood by that statement; that comment came as he was being endorsed by Rep. Doug LaMalfa, who represents a conservative district in the northeast part of the state.

GEORGIA GOVERNOR — Donald Trump’s Save America PAC made an unsubtle attempt to recruit David Perdue by releasing a Fabrizio Lee poll arguing that, with Trump’s support, the former senator would be the favorite to beat Gov. Brian Kemp in the GOP primary.

Perdue has shown no obvious interest in taking on Kemp, who infuriated Trump last year when he refused to go along with his plan to overturn Joe Biden’s victory in the state, and senior Republicans tell the Atlanta Journal-Constitution that they’re skeptical he’ll run. Perdue himself introduced Kemp at June’s party convention, and the paper says he privately told the governor earlier this year that he’d be supporting his re-election.

Still, that’s not stopping Trump’s team from releasing these numbers to Politico. The poll initially shows Kemp beating his only notable opponent, former state Rep. Vernon Jones, 41-19, with Perdue in third with 16%; in a one-on-one matchup, Kemp enjoys a smaller 46-40 edge over Kemp. When respondents are told “that President Donald Trump endorsed and fully supported David Perdue for Governor,” though, it’s Perdue who bests Kemp 41-26, with Jones at 13%.

The PAC’s decision to publicize these numbers also indicates that Trumpworld isn’t keen on supporting Jones. While Jones has been a fanatical Trump supporter, his not-so-recent past as a Democrat may make him too toxic even for the GOP leader.

MICHIGAN GOVERNOR / ATTORNEY GENERAL — While former U.S. Attorney Matthew Schneider didn’t rule out seeking the GOP nod for governor or attorney general earlier this year, he said Wednesday that he wouldn’t run for anything in 2022.

Arizona Republic: “The Arizona Court of Appeals said Thursday that the state Senate must turn over records from the contractor hired to conduct the review of Maricopa County’s 2020 election.”

“It’s the second consecutive day that a court has ruled against the Arizona Senate in its fight over records related to the audit, including email and other communications.”

Minneapolis Star Tribune: “Minnesota Republican leaders forced Jennifer Carnahan out as head of the state party on Thursday, turning a page on a scandal that threatened to consume GOP politics ahead of a pivotal election year.”

“Carnahan leaves as chair of the party amid allegations that she created a toxic workplace environment, one that blurred personal and professional lines, ignored concerns about sexual harassment and retaliated against employees who didn’t fall in line.”

“The party’s 15-member executive board voted 8-7 to give Carnahan a severance of three months salary, roughly $38,000, to leave her role. Carnahan, who attended the meeting virtually, was the deciding vote to give herself severance on the way out.”

“The Georgia State Board of Elections plans to appoint a review panel this week as part of a process that could lead to a takeover of elections in the state’s most populous county under a provision in the state’s sweeping new election law,” the Associated Press reports.

Politico: “For the seven months since she was sworn in, Kamala Harris has used her ceremonial office to build a network of allies and associates that can serve two purposes: strengthen the administration’s connections with key power players and groups while building an unofficial political operation in waiting — one she could activate for a future presidential bid.”

“Almost once a week, the fiercely loyal VP meets with advocates, activists, industry leaders and members of Congress to address her ever growing duties, which her staff calls her ‘Ceremonial Conversations’ series. And her staff then continues to communicate and coordinate with the individuals and groups that have attended her meetings long after they leave the EEOB.”

“Donald Trump has given the clearest indication yet that he is planning to run again for the White House as he prepares for a political rally this weekend,” the Times of London reports.

“Trump, 75, told Fox News that he was prevented from declaring his candidacy by campaign finance laws but viewers would be happy with his answer.”

Trump adviser Jason Miller was interviewed by Kara Swisher about a possible 2024 presidential by Donald Trump:

“When I went over to see him last week, and he had sitting out — someone had dropped off these four massive binders with thousands of petition signatures trying to draft him to run in 2024. And we were talking about it, and just hearing the way that he’s talking very much sounds like someone who is more likely to run than not.”

Politico: “Interviews with a dozen state chief election officers at the National Association of Secretaries of State summer conference here, along with panel discussions and conversations with other conference attendees, paint a picture of a radically different American election system post-2020, reshaped by a once-in-a-generation pandemic on one side and a near-unprecedented wave of misinformation on the other.”

“Now, those officials — who in many states also manage bureaucracies around things like business registration and licensing barbers and hairdressers — find their jobs dominated by elections. They have been besieged by conspiracies about what happened last year, and they’re increasingly being targeted personally by those same misinformation campaigns.”

Sen. Ted Cruz (R-TX) received a $320,000 book advance in 2020, Forbes reports.  “Cruz’s campaign may have boosted his book sales, dropping $153,000 at retailer Books-a-Million in the three months after his newest publication hit the shelves.”

Richmond Times-Dispatch: “A new redistricting commission made up of citizens and legislators was meant to end decades of partisan gerrymandering and produce fair maps for Virginia’s political districts. Early in the process, partisan tensions are already dividing the commission and threatening to derail its work amid a fast-approaching deadline.”

PENNSYLVANIA U.S. SENATOR — VoteVets has endorsed Rep. Conor Lamb, who served as a Marine prosecutor, in next year’s Democratic primary.

OHIO U.S. SENATOR — State House Minority Leader Emilia Sykes said this week that she would not seek the Democratic nomination for this open seat.

INDIANA U.S. SENATOR — Hammond Mayor Thomas McDermott announced this week that he would go up against Republican Sen. Todd Young, who is unlikely to be a serious Democratic target next year.

McDermott, a self-described moderate, spent years as a rising Democratic star, and he finally sought a promotion last cycle when he ran to succeed retiring Rep. Pete Visclosky in the reliably blue 1st Congressional District in the northwest corner of the state. The presumed frontrunner, though, ended up losing the primary to North Township Trustee Frank Mrvan, who had the backing of Visclosky and the United Steelworkers of America, in a 33-28 upset.

NEW JERSEY GOVERNOR — The RGA has launched what the New Jersey Globe’s David Wildstein describes as an opening “six-figure TV ad buy” going after Democratic Gov. Phil Murphy for vacationing in Italy this week as the pandemic remains serious. Wildstein notes that the group and its counterparts at the DGA each spent over $2 million here in 2017 in a contest that never looked very competitive.