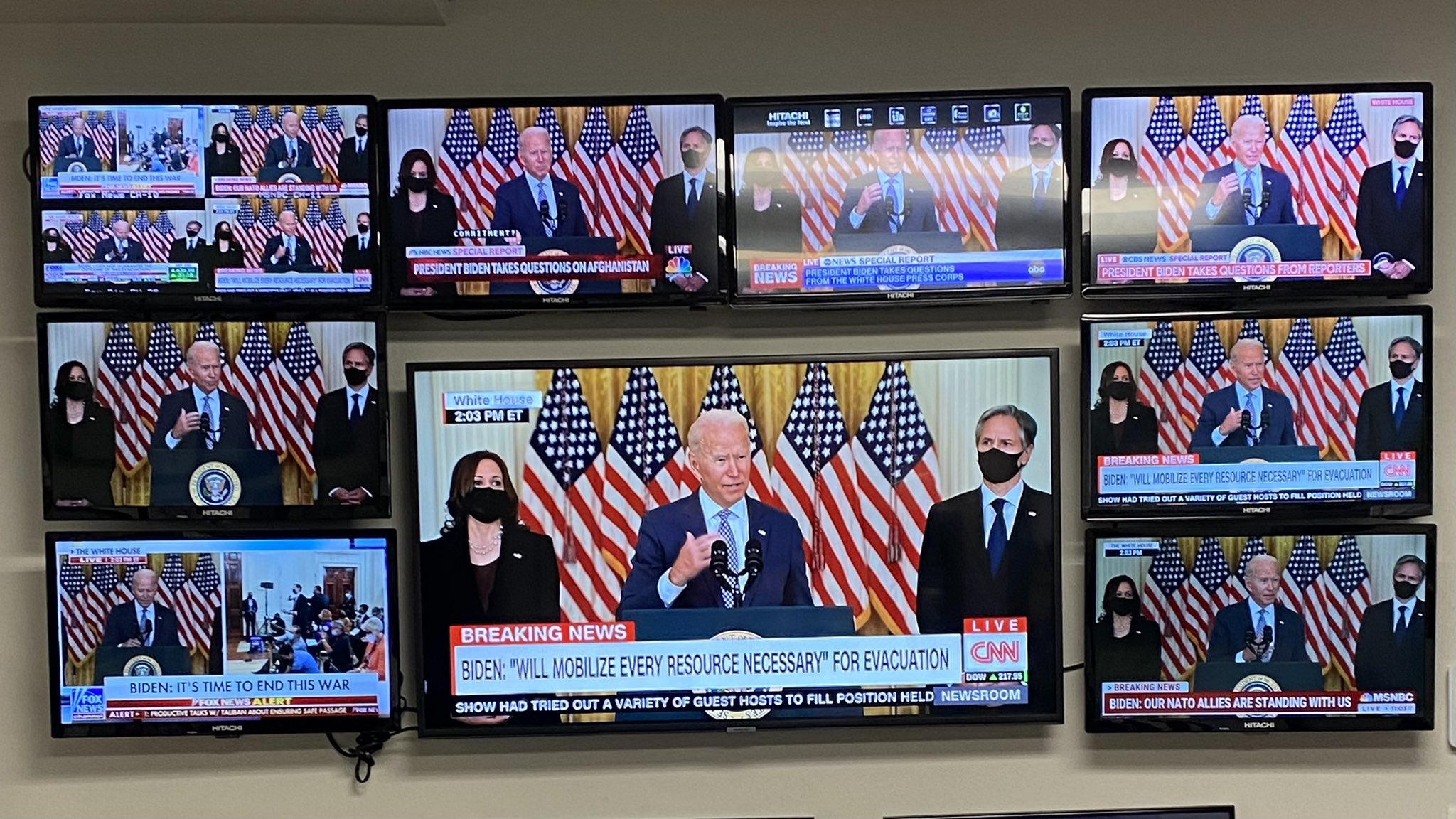 “North Texas doctors have quietly developed a plan that seeks to prepare for the possibility that due to the COVID-19 surge the region will run out of intensive-care beds,” the Dallas Morning News reports.

“If that happens, for the first time, doctors officially will be allowed to take vaccination status of sick patients into account along with other triage factors to see who gets a bed.”

Associated Press: “Anyone who wants to eat, drink or exercise indoors in San Francisco must show they are fully vaccinated against COVID-19 when one of the nation’s most stringent restrictions on unvaccinated people takes effect.”

Bloomberg: “The spread of the delta variant has forced many U.S. employers that had been hoping to get staff back to their desks after Labor Day to delay those plans until at least October—or even next year.”

“Gov. Kate Brown (D) announced that Oregon is expanding its COVID-19 vaccine requirement to include all teachers, educators, support staff and volunteers in K-12 schools,” the Associated Press reports.

“Teachers are the latest to be added to the growing statewide vaccine mandate — which also includes health care workers and state employees — that requires them to be fully vaccinated by Oct. 18 or six weeks after a COVID-19 vaccine receives full approval from the U.S. Food and Drug Administration, whichever is later.”

Politico: “The governors in Florida, Missouri and Texas are promising millions of dollars in antibody treatments for infected people even as they oppose vaccine and mask mandates, saying they can potentially keep people with mild Covid symptoms out of hospitals that are being swamped by new cases. But the treatments and cost of providing them are thousands of dollars more than preventive vaccines, and tricky to administer because they work best early in the course of an infection.”

“The push to medicate rankles public health officials and some within the Biden administration, who say the governors’ stance misleadingly implies Covid-19 can be treated easily, like the common cold. They note treatments like Regeneron’s antibody cocktail — which was administered to former President Donald Trump during his bout with the disease — are essential but part of a limited arsenal to keep patients from being hospitalized or dying, not a game-changer that could help end the pandemic.”

“The problem for the Republican Party is that one of the central demands of a key interest group is now an act of sociopathic insanity. Some of the most basic measures of public health have suddenly become the political equivalent of gun confiscation.”

“It’s as if the activist wing of the GOP decided that municipal trash pickup is a dangerous socialist experiment. Or chlorine in public pools is an antifa plot. There can be no absolute political right to undermine the health and safety of your community. Or else community has no meaning.”

Punchbowl News: “White House officials believe they have most Americans out of Afghanistan already. There were 11,000 Americans registered with the U.S. embassy in Kabul before the Ghani government collapsed.”

“But the administration believes that some may have left the country before the Taliban takeover without telling the embassy. Furthermore, other American passport holders may stay; indeed, some Americans were there the last time the Taliban controlled the country from 1996 to 2001. The Biden administration believes that the vast majority of the remaining evacuees will be Afghans.”

“The Biden administration is under pressure to expand its Afghanistan evacuation efforts beyond Kabul airport after European forces crossed Taliban lines and entered the city to rescue civilians. Access to the airport has been heavily restricted by Taliban fighters who have beaten people trying to flee the country,” the Washington Post reports.

“Earlier this week, an elite team of French police officers entered the capital’s Green Zone, where French nationals and vulnerable Afghans were sheltering on the grounds of the country’s embassy. They transported the people to Kabul airport for evacuation, the police confirmed.”

“There have also been reports of British paratroopers leaving the airport to rescue British nationals and local allies, although it isn’t immediately clear whether these efforts continued after the Taliban takeover.”

Roll Call: “The Taliban’s rapid takeover of Afghanistan could mean changes for the billions of dollars the Pentagon sought in the next fiscal year, but is unlikely to change the trajectory of the larger defense policy and spending bills currently under consideration in Congress.”

Associated Press: “When the Taliban swept over Afghanistan, Russia was ready for the rapid developments after working methodically for years to lay the groundwork for relations with the group that it still officially considers a terrorist organization.”

“The Taliban have begun rounding up Afghans on a blacklist of people they believe have worked in key roles with the previous Afghan administration or with U.S.-led forces that supported it, according to a report by a Norwegian intelligence group,” Reuters reports.

Politico: “In the Situation Room, Austin was now recommending that Biden send in troops to evacuate the embassy and protect the main international airport in Kabul. Sullivan asked each Cabinet member in the meeting to weigh in. They unanimously agreed. That was the ‘oh, shit’ moment, said a U.S. official. It was now officially a crisis.”

ProPublica: “A new report this week by the Special Inspector General for Afghanistan Reconstruction also reveals the depths of failure of the United States’ entire 20-year, $145 billion effort to reconstruct (or construct, in some cases) Afghanistan’s civil society.”

“The efforts to create a new government and military from scratch were overly ambitious. They failed to consider the needs and abilities of Afghans. There was a disregard for learning from past mistakes.”

“And the goals were far too ‘pie in the sky’ for one of the world’s poorest nations, a country still racked by violence.”

“Jobless claims fell to a pandemic low of 348,000 last week, suggesting the labor market continues to heal even as the Delta variant causes uncertainty,” the Wall Street Journal reports.

Politico: “Only eight of the 26 states that ended federal jobless benefits early saw a statistically significant drop in unemployment in July, according to Bureau of Labor Statistics data out Friday. Nine states and the District of Columbia that did not end the benefits also saw statistically significant drops in unemployment, muddying the waters as economists, policymakers and labor advocates are searching for any indication of the ramifications of some governors’ decision to cut off emergency unemployment insurance before its Sept. 6 expiration date.”

Related from New York Times: “When states began cutting off federal unemployment benefits this summer, their governors argued that the move would push people to return to work. New research suggests that ending the benefits did indeed lead some people to get jobs, but that far more people did not, leaving them — and perhaps also their states’ economies — worse off.”

Associated Press: “The Biden administration announced Thursday it will automatically erase student loan debt for more than 300,000 Americans with severe disabilities that leave them unable to earn significant incomes.”

“A federal judge on Wednesday threw out the permits for a controversial oil project planned for Alaska’s North Slope, faulting the way the federal government had assessed its environmental impact, including how it might harm polar bears,” the Washington Post reports.

New York Times: “The multibillion-dollar plan, known as Willow, by the oil giant ConocoPhillips had been approved by the Trump administration and legally backed by the Biden administration. Environmental groups sued, arguing that the federal government had failed to take into account the effects that drilling would have on wildlife and that the burning of the oil would have on global warming.”

Josh Rogin: “Among the items seized by the Taliban are Black Hawk helicopters and A-29 Super Tucano attack aircraft.”

Axios: “The Biden administration is so concerned about the weapons that launching airstrikes against the larger equipment, such as helicopters, hasn’t been ruled out.”

“But there’s concern that could antagonize the Taliban at a time when the main U.S. goal is evacuating people.”

“Three senators announced within hours of each other on Thursday that they had tested positive for the coronavirus, despite each being fully vaccinated,” The Hill reports.

“Sens. Roger Wicker (R-MS), Angus King (I-ME) and John Hickenlooper (D-CO) said they had tested positive in what is known as a breakthrough case, when fully vaccinated individuals test positive for COVID-19.”

House members criticized Rep. Mo Brooks (R-AL) after he released a statement “that appeared to be sympathetic to the man police had arrested earlier in the day in connection with a bomb threat near the U.S. Capitol,” NBC News reports.

Wrote Brooks: “Although this terrorist’s motivation is not yet publicly known, and generally speaking, I understand citizenry anger directed at dictatorial Socialism and its threat to liberty, freedom and the very fabric of American society The way to stop Socialism’s march is for patriotic Americans to fight back in the 2022 and 2024 election.”

“Manhattan prosecutors are moving to advance their criminal investigation into former President Donald Trump’s business affairs, fighting with his company over evidence and continuing talks with the lawyer of a Trump Organization executive who hasn’t been charged,” the Wall Street Journal reports.

“Manhattan prosecutors and Trump Organization lawyers appeared at a secret court proceeding with New York State Supreme Court Justice Juan Merchan last week to discuss a dispute over documents the Manhattan district attorney’s office has subpoenaed … In another sign of movement in the criminal probe, prosecutors have been holding talks with a lawyer for Trump Organization executive Matthew Calamari, partly to determine whether his cooperation would be helpful.”

“Russian President Vladimir Putin, during a June 16 summit meeting with President Biden, objected to any role for American forces in Central Asian countries, undercutting the U.S. military’s efforts to act against new terrorist dangers after its Afghanistan withdrawal,” the Wall Street Journal reports.

“The previously unreported exchange between the U.S. and Russian leaders has complicated the U.S. military’s options for basing drones and other counterterrorism forces in countries bordering landlocked Afghanistan.”

“One of the most senior Russian security officials questioned Washington’s commitment to Ukraine in light of its rushed exit from Afghanistan, yesterday forecasting that it would one day abandon its Ukrainian allies in a similarly abrupt fashion,” the South China Morning Post reports.

“For the first time in nearly six weeks, state officials said there were enough lawmakers present in the Texas House on Thursday for the chamber to conduct business — opening the door for the passage of the GOP priority elections bill that prompted Democrats to flee the state in July in an effort to shut down the legislation,” the Texas Tribune reports.

Axios: “Coronavirus patients who end up hospitalized — the vast majority of whom are unvaccinated — are increasingly likely to be on the hook for their medical bills.”

“Early in the pandemic, most insurers waived out-of-pocket costs for coronavirus hospitalizations.

“But with vaccines readily available, many patients are once again on the hook for deductibles and co-pays, which could make remaining unvaccinated a lot more expensive.”

“The right-wing channel Fox News, whose top personalities have for months assailed the concept of vaccine passports and argued that asking about vaccine status amounts to a major intrusion of privacy, told employees this week that they must disclose their vaccination status to the company,” CNN reports.

Axios: “Naftali Bennett will visit next Thursday, the White House confirmed, which will likely make him the first world leader to meet Biden during his ‘Saigon moment.’ Israeli and U.S. officials initially tried to schedule the visit for July, but it was shifted to August.”