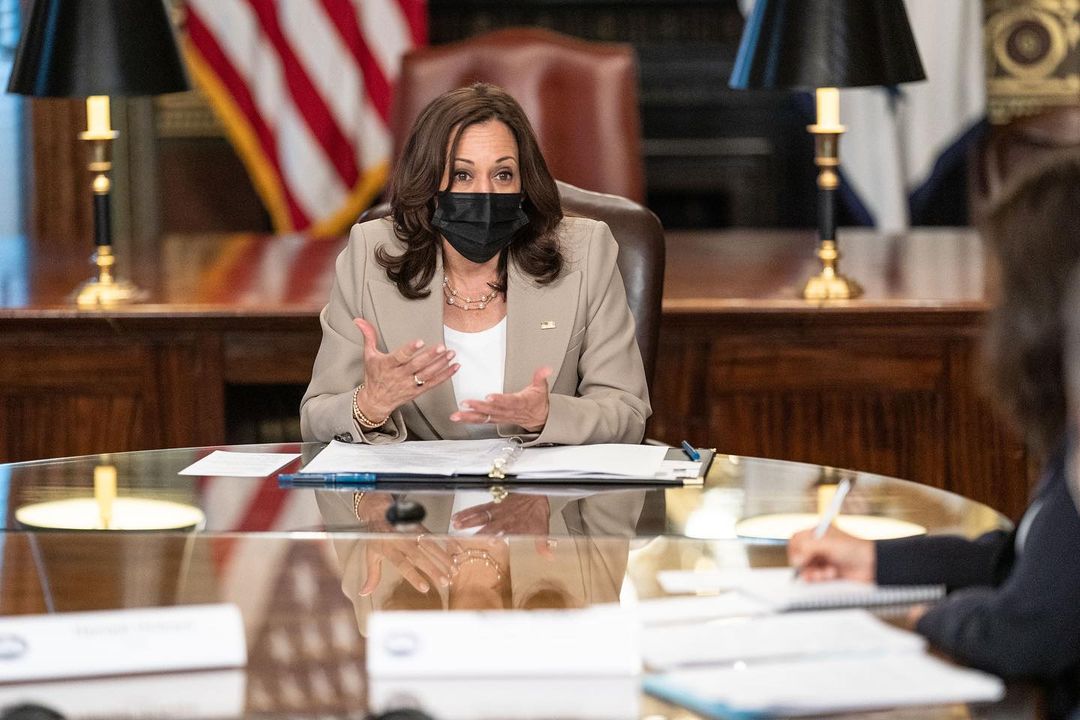 A new AP-NORC poll finds the public is more concerned about the threat caused by domestic extremist groups than those from outside the country.”

Another key finding: “Only 35% of Americans say the war in Afghanistan was worth fighting. A similar percentage say the same of the war in Iraq.”

Federal officials are pressing Rep. Lauren Boebert (R-CO) for answers on the apparent personal use of thousands of dollars in campaign funds, CNBC reports.

Rep. Lauren Boebert’s (R-CO) husband “made $478,000 last year working as a consultant for an energy firm, information that was not disclosed during Boebert’s congressional campaign and only reported in her financial disclosure forms filed this week,” the AP reports.

“Boebert did not report the income last year, when she stunned the political world by ousting incumbent Rep. Scott Tipton during the GOP primary in Colorado’s sprawling 3rd district, which stretches from ski resorts to energy-rich basins in the state’s west.”

“Conservatives have pulled off a shock victory in provincial elections in an ominous warning to Justin Trudeau before Canada goes to the polls next month,” the Times of London reports.

“The result in Nova Scotia, a Liberal stronghold, offers the first indicator of the electoral mood since Trudeau’s decision to call a snap general election.”

FiveThirtyEight: “Overall, 16 representatives have announced their departures,3 but in another ominous sign for Democrats, the type of seats the two parties are leaving open differs dramatically…”

“Seven of the eight outgoing Democrats represent districts that are less than 5 points more Democratic than the country as a whole — including the seats held by Kind and Lamb — which could make those seats easier for the GOP to flip next year. By comparison, only one Republican is leaving a seat that’s less than 10 points more Republican, meaning retirements and departures from office haven’t left the GOP as exposed.”

CALIFORNIA GOVERNOR — “California Gov. Gavin Newsom (D) is using increasingly stark language as he campaigns in the final month of a tight recall election, calling it ‘a matter of life or death’ that voters keep him in office and he is increasingly targeting a single Republican candidate: talk show host Larry Elder,” CBS San Francisco reports.

Newsom’s campaign is running a new commercial arguing that a no vote in the Sept. 14 recall election is necessary to protect the state from the pandemic.

“With Delta surging, Gavin Newsom is protecting California,” declares the narrator, “requiring vaccination for health workers and school employees.” The ad then hits conservative radio host Larry Elder, who appears to be the GOP frontrunner, for having “peddled deadly conspiracy theories, and would eliminate vaccine mandates on day one, threatening school closures and our recovery.”

The spot is part of what the GOP firm Medium Buying reports is $2.42 million that Newsom’s camp is spending this week for TV and radio spots. Elder, by contrast, is deploying $744,000 on advertising during this time, while former San Diego Mayor Kevin Faulconer is dropping $333,000.

Yet another Republican contender, 2018 nominee John Cox, also earned national attention at Tuesday’s debate, though probably not in the way he’d like. Just as Cox began his introductory remarks, a private investigator working for the advertising firm Cox employed during his last race interrupted him, threw papers down to the candidate’s feet, and announced, “John Cox, you’ve been served; San Diego Superior Court order by the judge.” The investigator was immediately escorted out, and Cox picked up back where he left off.

Earlier this year, a San Diego judge ordered Cox to pay the firm almost $100,000 for alleged unpaid 2018 campaign fees and attorney costs, a bill the campaign disputes. Cox said after the debate, “​​It’s one creditor who didn’t get paid from the 2018 campaign because he didn’t deserve to be.”

Former Rep. Doug Ose announced Tuesday that he was ending his campaign in the Sept. 14 recall election following a heart attack two days before. Ose, who is one of the many Republicans hoping to succeed Democratic Gov. Gavin Newsom, will remain on the ballot.

MICHIGAN GOVERNOR — We learned this week that former Gov. John Engler was backing ex-Detroit Police Chief James Craig in the GOP primary after the Detroit Free Press reported that Engler was the treasurer of a new pro-Craig group called “We Need the Chief.” Engler left office in early 2003 after three terms leading the state, and he was in the news in 2019 after he resigned as interim president of Michigan State University ahead of his likely ouster by unhappy members of the school’s board.

NEW JERSEY 11TH CD — Morris County Commissioner Tayfun Selen announced Monday that he would seek the GOP nomination to take on Democratic Rep. Mikie Sherrill in a North Jersey seat that has swung hard to the left in recent years. Selen previously served as mayor of Chatham Township, which the New Jersey Globe’s David Wildstein says made him the country’s first Turkish American mayor. Selen was appointed to his current countywide post last year and turned back a Democratic foe 52-48 as Joe Biden was taking Morris County 51-47.

NEVADA LT. GOVERNOR — The Nevada Independent reported Monday that Democratic Lt. Gov. ​​Kate Marshall would resign her post to become the White House’s senior adviser to governors. Democratic Gov. Steve Sisolak has the power to appoint her replacement for the remainder of Marshall’s term, which ends in early 2023. In Nevada, candidates for governor and lieutenant governor are elected separately.

Marshall herself attracted national attention in 2011 when the then-state treasurer was Team Blue’s special election nominee for the 2nd Congressional District, a northern Nevada seat that became vacant after Dean Heller was appointed to the Senate. Democrats hoped that they’d have an opening in a constituency that had only narrowly supported John McCain, but Marshall struggled to gain traction at a time when Barack Obama’s approval rating was at one of the lowest points of his presidency. Former state Sen. Mark Amodei ended up winning the expensive race by a lopsided 58-36 margin, and he’s had no trouble keeping it since then.

Marshall went on to campaign for secretary of state in 2014, but she lost to Republican Barbara Cegavske 50-46 during another tough time for Team Blue. Marshall bounced back during the 2018 Democratic wave, though, when she flipped the open lieutenant governor’s office 50-44.

FLORIDA U.S. SENATOR — Two surveys were released Wednesday testing Republican incumbent Marco Rubio in a hypothetical general election match with Rep. Val Demings, the Democratic frontrunner, but they very much disagree on how competitive this contest is. The GOP firm Susquehanna Polling and Research’s poll for the betting site BUSR gave Rubio a 50-39 lead, while St. Pete Polls’ survey for Florida Politics had the senator ahead just 48-46.

OHIO U.S. SENATOR — Attorney Morgan Harper, who waged a well-funded but unsuccessful Democratic primary campaign last year against Rep. Joyce Beatty in the 3rd Congressional District, announced Wednesday that she would run for Ohio’s open Senate seat. Harper will go up against Rep. Tim Ryan, who has had the field to himself until now and enjoys the support of Beatty and a number of other influential Buckeye State Democrats.

Harper, who had worked as an advisor to the Consumer Financial Protection Bureau, decided last cycle to take on Beatty in a safely blue Columbus-area district. The first-time candidate, who was almost half Beatty’s age, argued that it was time for generational change and that the incumbent wasn’t doing enough for her seat.

Harper brought in a credible amount of money from fellow progressives but was still decisively outspent, and she got some more unwelcome news one day before the mid-March primary when GOP Gov. Mike DeWine, citing the quickly unfolding pandemic, haphazardly canceled it hours before it was to begin. The election was eventually moved to late April and Beatty, who had far more money left for the unexpectedly lengthened primary, enjoyed a massive spending edge over Harper in the final weeks. Ultimately, the incumbent turned back Harper by a 68-32 margin.

UTAH U.S. SENATOR — The conservative September Group, which is run by a former consultant for Sen. Mike Lee, has released a GOP primary poll from OH Predictive Insights that gives Lee 45% of the vote and shows none of his announced opponents taking more than 3%.

ALASKA GOVERNOR — Independent Bill Walker announced Tuesday that he would run to reclaim his old job as governor of Alaska from his Republican successor, Mike Dunleavy, in next year’s top-four primary. Walker is the first notable contender to launch a campaign, though former Democratic state Rep. Les Gara formed an exploring committee last month.

Walker faced a tough four years in office thanks to a budget crisis from declining oil revenue, and he was a top GOP target early in the 2018 cycle. The governor’s road to victory got even tougher when former Democratic Sen. Mark Begich entered the race, which cost Walker the chance to benefit from Democratic institutional support. Ultimately, Walker dropped out weeks before Election Day and endorsed Begich following Mallott’s resignation in the face of a sexual harassment scandal, but this late development wasn’t enough to stop Dunleavy from prevailing the following month.

Walker launched his comeback campaign arguing that, while he wasn’t able to solve the state’s budget woes, the state dramatically reduced its deficit during his tenure. He also declared that Dunleavy had done a poor job in his place, saying that Alaskans didn’t know “about how much more from the university is going to be cut, how much more can be cut from the marine highway system and how government services will continue to decline.”

Unlike in 2014, when Walker appealed to Democrats by enlisting Mallot (who died in 2020) as his candidate for lieutenant governor, his running mate this time is a fellow independent, former Department of Labor and Workforce Development head Heidi Drygas. Still, the state’s new top-four primary rules, which will pit four candidates on one instant-runoff ballot in the fall of next year, gives Walker a path to victory even if a notable Democrat runs.

It’s also still possible that Dunleavy could face the voters earlier than 2022. The website of the bipartisan group Recall Dunleavy, which has been trying to launch a recall campaign against the governor since 2019, includes a tracker that says it has collected about 58,000 signatures as of late April, though it has not provided an update since then.

Recall Dunleavy has until early June of next year to submit the 71,000 valid petitions needed to force a recall election; if Dunleavy is removed from office early, he would be succeeded by his fellow Republican, Lt. Gov. Kevin Meyer. We haven’t seen any polls this year, though, to indicate if the governor is vulnerable in either a recall race or the regular 2022 contest.

The poll also tested Hochul in a trio of head-to-head matchups:

There has been plenty of speculation about a James candidacy, but she’s said nothing about going up against Hochul. De Blasio, for his part, didn’t rule out taking on Cuomo before he resigned but doesn’t seem to have said anything since then, while AOC has shown no obvious interest in running for governor.

The pollster tells us this survey was done for a client, but that it was not conducted in support or opposition to anyone.

VIRGINIA GOVERNOR — Republican Glenn Youngkin is out with a pair of ads (here and here) arguing that Democrat Terry McAuliffe would endanger public safety if he returns to the governorship.

McAuliffe quickly responded with a spot featuring several public safety officials declaring that during his tenure, Virginia was the “fourth safest state in America.” The Democrat’s supporters then say that Youngkin “has a budget plan that cuts hundreds of millions of dollars from law enforcement.”