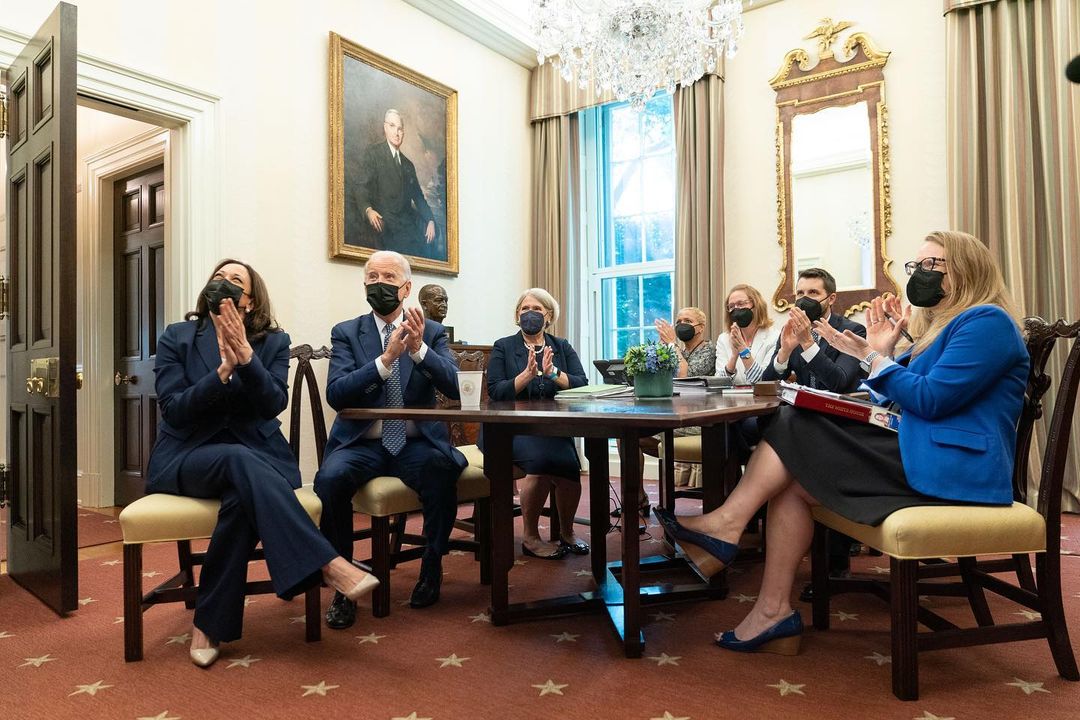 A new Politico/MornConsult poll finds Just 49% of voters continued to support the withdrawal of troops from Afghanistan, down from 69% in April.

Josh Marshall: “This is hardly surprising: the concept of bringing everyone home is easier to support without pictures of the messy realities of the situation. The data point is listed in this morning’s Politico newsletter as well (“Here’s one bad sign for Biden:”). Not mentioned as far as I can tell in any of these write-ups is this: Even after a weekend of chaotic, ugly images and 48 hours of relentlessly negative news coverage, support and opposition to Biden’s withdrawal plan, according to this poll was 49% in favor and 37% opposed. The fact that the plan still has a net +12 approval even at such a bleak moment is surely a relevant part of the story.”

New York Times: “The political impact of the chaos and possible bloodshed in Afghanistan is far from clear, either in the midterm congressional elections next year or the 2024 presidential election.”

“Once the images from Kabul this week fade from television screens, relief that the war is over — at least for U.S. troops — could be the dominant emotional outcome.”

John Podhoretz: “Has anyone seen a formal resignation letter from Cuomo with a signature at the bottom? Surely such a formal document is legally necessary, given the nature of the powers Cuomo holds as chief executive of the state of New York. He must forswear his office as a matter of functional law so that it can be vacated before his successor, Kathy Hochul, is sworn in.”

“His resignation is supposed to take effect in eight days. Where is the letter?”

“Might it be that Cuomo has a scheme to stick around?”

Said Cuomo: “I’m not an adviser. I’m a brother. I wasn’t in control of anything, I was there to listen, and offer my take. My advice to my brother was simple and consistent, own what you did, tell people what you will do to be better, be contrite, and finally accept that it doesn’t matter what you intended, what matters is how your actions and words were perceived.”

He added: “And while it was not something that I ever imagined ever having to do, I did urge my brother to resign, when the time came.”

Bill Walker was an independent Governor that was supported by Democrats who was elected to his only term in 2014. The only other notable politician who has expressed interest in running so far is former state Rep. Les Gara, a Democrat who formed an exploratory committee last month and recently said that, while he hasn’t made a final decision, he’s “likely” to get in.

Cayetano served as first lady of Hawaii while her husband, Ben Cayetano, was governor two decades ago, but she’s never sought elected office in her own right. Indeed, Civil Beat reporter Kevin Dayton wrote last month that Cayetano, who leads the local division of the laundry giant PureStar, had “generally had not been politically active” until last year, when she co-chaired independent Rick Blangiardi’s successful campaign to succeed Caldwell as mayor.

Despite her political pedigree, Cayetano sounds like she plans to pitch herself as an outsider if she runs for governor, saying in July that, like Blangiardi, she would bring “a new perspective on the problems that we face.”

P.S. This will be the second time that Caldwell has gone up against a member of the Cayetano family. In 2012, a decade after his governorship ended, Ben Cayetano campaigned for mayor of Honolulu in a campaign focused on his opposition to the still-controversial multi-billion dollar ​​Honolulu Rail Transit Project. Caldwell, by contrast, ran as the pro-rail contender and ended up winning 54-46.

IOWA GOVERNOR — Deidre DeJear, who was the 2018 Democratic nominee for secretary of state, announced over the weekend that she would challenge Republican Gov. Kim Reynolds. DeJear won her 2018 primary by narrowly defeating Jim Mowrer, who had waged two well-funded bids for Congress, but she lost the general to GOP incumbent Paul Pate 53-45.

DeJear joins state Rep. Ras Smith in the primary, and either one of them would be Iowa’s first Black statewide elected official. Two other prominent Hawkeye State Democrats, Rep. Cindy Axne and state Auditor Rob Sand, are also considering getting in.

MINNESOTA GOVERNOR — Dermatologist Neil Shah announced earlier this month that he would seek the GOP nomination to take on Democratic Gov. Tim Walz, and he said over the weekend that he’d already brought in $100,000. Shah began his campaign with the typical Trump-era griping about Walz’s public health protocols and invectives against the “woke mob.”

NEW YORK GOVERNOR — There are several Democrats who could challenge soon-to-be-Gov. Kathy Hochul in next year’s primary, and former New York City Council Speaker Christine Quinn now isn’t ruling out joining the contest or campaigning for lieutenant governor. Quinn ran for mayor in 2013 to succeed her ally, Michael Bloomberg, and while she spent much of that contest as the frontrunner, she ended up taking third in the primary with 16% of the vote.

Meanwhile, there’s plenty of speculation that Attorney General Letitia James and state Comptroller Tom DiNapoli could also get into the governor’s race. On Friday, after the Gotham Gazette’s Ben Max directly asked the comptroller if he was thinking about running for governor (the relevant portion begins at the 41:20 mark), DiNapoli responded he’d “probably say” he still planned to run for re-election but added that he was flattered to be mentioned.

He continued that he felt Hochul deserved time to settle into her new job and that Empire State politicians should “give it all a few months to see what the lineup is for next year, but I do expect to be on the ballot.” When Max asked when he felt he’d need to make a decision about running for governor, DiNapoli said he hadn’t thought about it much and didn’t have “a personal deadline.”

James, by contrast, doesn’t appear to have said anything publicly yet about her interest in the days since Andrew Cuomo announced his resignation, though that’s hardly stopped her backers from musing about the idea. Party strategist L. Joy Williams, whom the New York Times identified as a James ally, noted last week that several former state attorneys general, including Cuomo, have been elected governor, and, “It’s naïve to think she couldn’t do the same, if not with a broader coalition and energy behind her campaign, if she decides to run.”

VIRGINIA GOVERNOR — The Republican firm co/efficient released new numbers on Friday that show Democrat Terry McAuliffe edging out Republican Glenn Youngkin 47-45 in this fall’s election. The survey was publicized days after a different co/efficient poll for a group called Conservatives for Clean Energy had McAuliffe ahead by a wider 45-40 spread; there’s no word on a client for this new survey.