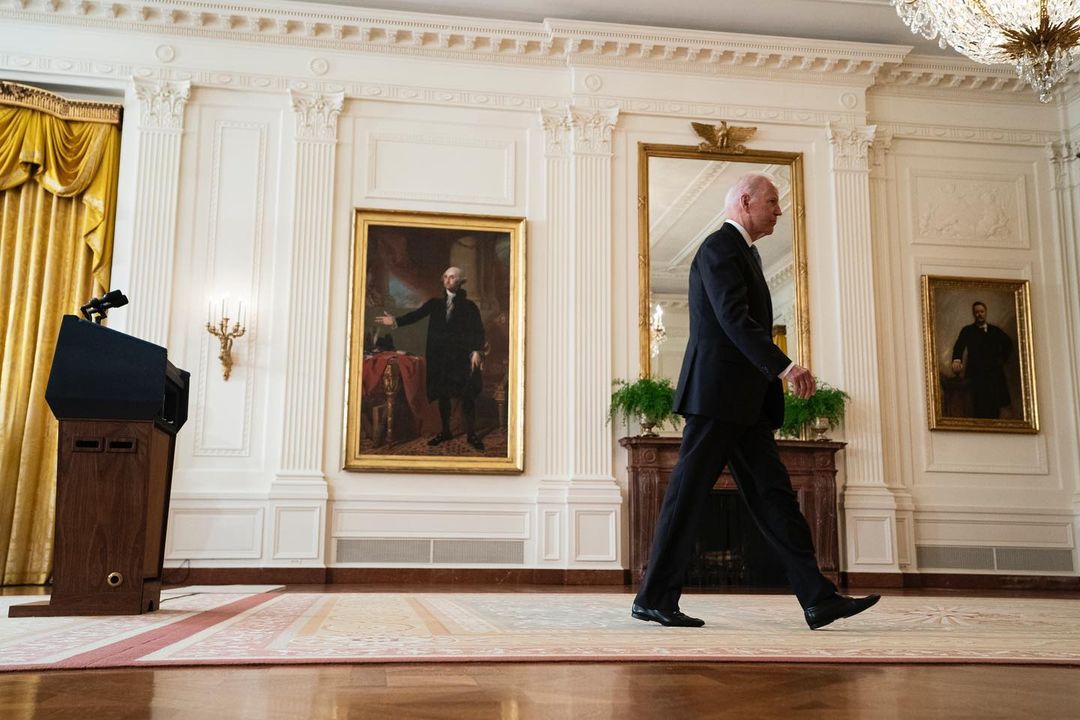 President Biden addressed the nation on the U.S. pullout of Afghanistan and said he “stands squarely” behind his decision to pull out U.S. troops.

Said Biden: “Our mission in Afghanistan was never supposed to be nation-building. Our mission was preventing a terrorist attack on the United States.”

He added: “The truth is that this did unfold more quickly than we anticipated. So what happened? Afghan political leaders gave up and fled the country.”

Biden also said that after 20 years of war, he learned there was never a good time to withdraw forces.

“The U.S. military is deploying another 1,000 paratroopers to help secure Hamid Karzai International Airport in Kabul, where evacuations were halted Monday after thousands of Afghan civilians stormed the runway in an attempt to flee the country,” Axios reports.

New York Times: “The Pentagon said Monday that at this time there were no flights coming or going, military or civilian, into Hamid Karzai International Airport.”

Associated Press: “Thousands of Afghans rushed onto the tarmac of Kabul’s international airport Monday, some so desperate to escape the Taliban capture of their country that they held onto an American military jet as it took off and plunged to death in chaos that killed at least seven people.”

Associated Press: “An Afghan military plane was downed by Uzbekistan’s air defense system on Sunday over an attempt to illegally enter the country’s air space.”

“Russia’s embassy in Kabul said on Monday that Afghan President Ashraf Ghani had fled the country with four cars and a helicopter full of cash and had to leave some money behind as it would not all fit in,” Reuters reports.

White House national security adviser Jake Sullivan said Monday that President Biden did not believe it was “inevitable” that the Taliban would take control of Afghanistan, laying the blame at the feet of the Afghan security forces who “decided not to step up and fight for their country,” Axios reports.

Washington Post: “U.S. military officials privately harbored fundamental doubts for the duration of the war that the Afghan security forces could ever become competent or shed their dependency on U.S. money and firepower.”

Said on unnamed U.S. official in 2016: “Thinking we could build the military that fast and that well was insane.”

“Those fears, rarely expressed in public, were ultimately borne out by the sudden collapse this month of the Afghan security forces, whose wholesale and unconditional surrender to the Taliban will go down as perhaps the worst debacle in the history of proxy warfare.”

Axios: “The Taliban’s lightning seizure of Afghanistan’s capital yesterday exposed stunning failures of American intelligence, imagination and execution that will be studied as long as people study history.”

“I started the process, all the troops are coming home. Biden couldn’t stop the process.” — Donald Trump, at a rally last month, on pulling U.S. troops out of Afghanistan.

“We had a very good conversation with the leader of the Taliban today, and they’re looking to get this ended, and we’re looking to get it ended. I think we all have a very common interest… The relationship is very good that I have with the mullah.”  — President Donald Trump, quoted by ABC News, after signing an agreement on Feb. 29, 2020 calling for the withdrawal of American troops.

“As soon as we leave it’s all going to blown up anyway… the minute we leave, everything blows up. It will go on for many years and the sad part is as soon as it ends, you have those guys sitting back waiting.” — Donald Trump, on Fox News in 2012, on what would happen when the U.S. leaves Afghanistan.

Dave Weigel notes the RNC has deleted a post from its website that praised Donald Trump for signing a “historic peace agreement with the Taliban.”

I wonder why he didn’t say that when Trump was making deals with the Taliban?

Gerald Seib: “The odyssey was thoroughly bipartisan, and in the end the retreat from it was widely supported by the public. In retrospect, it appears Americans lost their interest in Afghanistan when their leaders failed to keep showing that the exercise still was connected to its original and narrow purpose, which was to head off the threat of terrorism. Americans wanted victory over extremism, not an open-ended presence to make it less likely.”

Look, the only way to leave Afghanistan was the way we left. If Biden had taken more time to more “cautiously and securely” leave, the military would have him delay six months, and then another six months, and all the while we would be under attack by the Taliban, which would have required of course tens of thousands of more troops to fight them off to secure the country. In other words, staying longer was a trap that has been set and triggered before (see Obama 2009). The bandaid had to be ripped off. And the shock of it, that Biden did not conform to the Blob’s demands, is why the Blob is being particularly harsh and loud in its criticism.

It’s obviously true that withdrawal did not go as Biden planned. But it’s also true that those criticizing Biden offer no better plan. All they can say after 20 years of war is, “Give us a few more months.”

Biden had already delayed the withdrawal after Trump promised to leave by May 1. He delayed the exit for for logistical reasons, arguing his predecessor had no plan. The whole point of the last few months was to prepare.

Could it have been done better? One would hope so. But the reality is that nothing about the Afghanistan war has been competent for nearly two decades. Should we really expect it now? The repeated incompetence of the three previous administrations should have been a reason to leave the country. Instead, it was always used as an excuse to stay a little longer. As ugly and as desperately sad as it is to watch, Biden took the only way out of forever war.

“Most days during the coronavirus pandemic, Cardinal Raymond Burke could be found strolling down the streets of Rome maskless and carrying rosary beads. The 73-year-old conservative cardinal was an early critic of social distancing and, later, an unabashed skeptic of the vaccine,” the Washington Post reports.

“On Tuesday, Burke announced he had tested positive for the coronavirus. Now, the cardinal is in a hospital bed in his native Wisconsin, breathing with the help of a ventilator.”

Burke once said that Catholics who voted for Obama had “collaborated with evil.”

New York Gov. Andrew Cuomo (D) once said he didn’t want Democrats to have total control of the New York state Senate and the budget in part because he thought state Sen. Andrea Stewart-Cousins (D), the Democratic leader, would “give free breakfast to all Black people,” the New York Times reports.

“In interviews with Republican operatives, former Trump administration officials, and conservative leaders, there is a widespread acceptance that debate over marriage equality is settled,” Politico reports.

“But on transgender rights issues in particular, fierce opposition within GOP ranks persists. The Trump-era Education Department eliminated guidance that sought to extend protections around the treatment of transgender students. And Trump himself issued an executive order, via tweet, prohibiting transgender individuals from serving in the military — a move later overturned by President Joe Biden.”

Said one Trump adviser: “I think even with Christians the gay issue, that ship has sailed. But the trans issue is different.”

“A new state law will soon let most Texans carry handguns in public without going through training or having to get permits,” the Texas Tribune reports.

“But some Texas law enforcement officers fear that removing restrictions to carrying handguns could increase crime rates while putting officers and residents in danger.”

Bloomberg: “House Democrats scheduled a caucus call for Tuesday at noon as they seek to resolve differences over the path forward and the sequencing of Biden’s two-track approach.”

Playbook: “Which will come first in the House, a vote on the Senate’s bipartisan infrastructure bill or a vote on the budget resolution to open the door for Democrats’ $3.5 trillion spending package? It’s the question confounding both progressives and moderates.”

In a letter to colleagues this morning, Speaker Nancy Pelosi announced that she’d try to do both at once: “I have requested that the Rules Committee explore the possibility of a rule that advances both the budget resolution and the bipartisan infrastructure package.”

“House GOP Leader Kevin McCarthy has been maintaining a deliberate silence about how his caucus should approach the $1.2 trillion bipartisan infrastructure bill,” Axios reports.

“The House GOP conference has yet to receive any guidance on messaging for the bipartisan bill. It’s targeting all of its messaging on attacking Democrats’ parallel discussions of unilaterally enacting a $3.5 trillion spending bill through the budget reconciliation process.”

Politico: “Nearly eight months into his presidency, America’s largest corporations are voicing frustration that Biden has not rolled back any of former President Donald Trump’s major tariffs, particularly the duties on $350 billion worth of Chinese imports.”

“Other than announcing a top-to-bottom China review in January, Biden’s administration has given little indication how it will handle trade issues with its chief global rival. That has corporations leaning on Congress to pass relief on tariffs and trade restrictions this fall.”

“The justices granted Abbott’s request for an emergency stay that blocks lower court decisions allowing officials in those counties to require masks in schools or indoor spaces.”

“Justin Trudeau triggered an election campaign Sunday as he looks to regain the strong hold on power his Liberals lost nearly two years ago… He announced that Canadians will vote Sept. 20,” Politico reports.

“Trudeau will look to capitalize on strong polling and his government’s record in handling the health and economic crises of the pandemic. The summer election campaign carries risk for Trudeau. Polls suggest that a majority mandate is not a lock, and the pandemic’s uncertainty threatens to create unexpected campaign conditions.”

CNN: “The US remains among nations with the highest rate of new Covid-19 cases, driven mostly by a surge in the South, where many states are lagging in getting people vaccinated against the coronavirus.”

“Democrats are betting Republicans will blink and agree to raise the debt ceiling before it expires, a risky wager after a weeks-long standoff that threatens the health of the financial markets and continued U.S. government operations,” Bloomberg reports.

“Should market turmoil and a federal shutdown ensue this fall, it could overshadow Democrats’ efforts to push through President Joe Biden’s $4.1 trillion economic agenda and serve a blow to the party heading into next year’s midterm elections.”