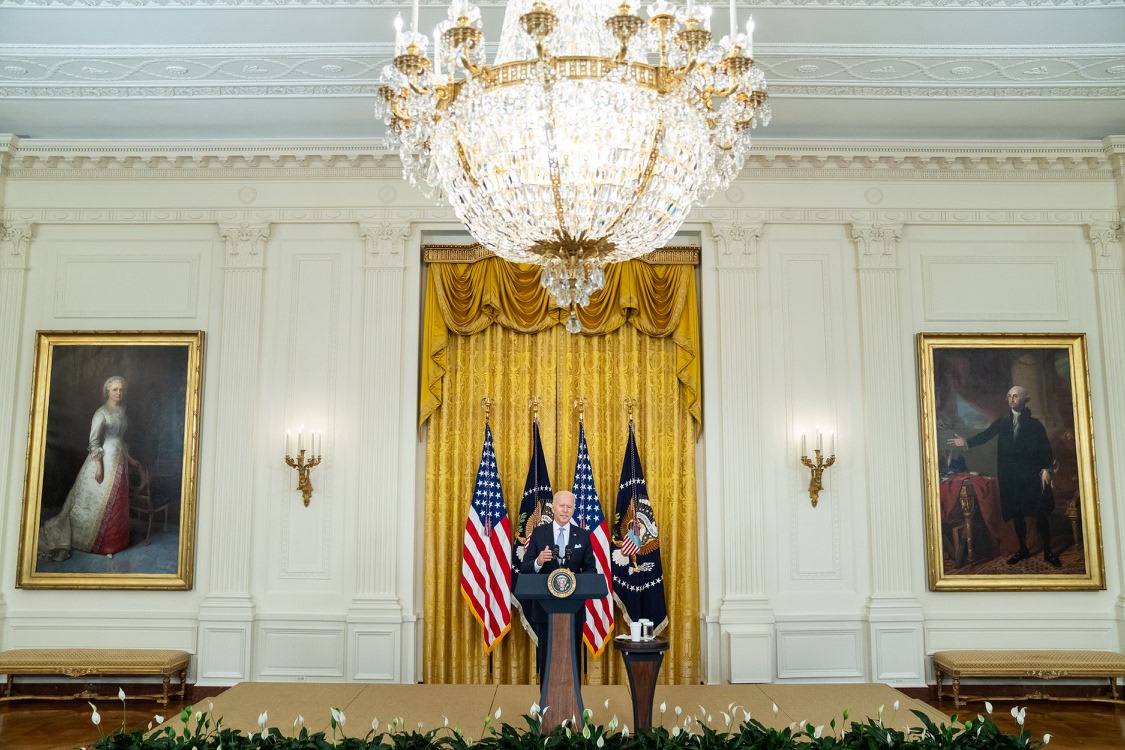 Politico: “[Last] week, with the slimmest possible Democratic majority and in the same 16-hour period, Schumer’s two wings flew in unison. Sanders and other progressives voted for the bipartisan infrastructure plan, and moderates voted for a budget that sets up a $3.5 trillion spending bill.”

“It was a distillation of one of the trickiest balancing acts in Schumer’s career — something that the New York Democrat is getting used to while captaining a 50-50 Senate for longer than anyone in history.”

“His path to resolving internal caucus battles, Schumer said, is ‘not mysterious. I preach how we each need each other. And without unity we have nothing.’”

Jonathan Last: “The universe keeps setting up tests for the Democrats, daring them to show they’re not a normal political party:

“And every time—every single time—the Democrats have passed.”

ProPublica: “In the first year after Trump signed the legislation, just 82 ultrawealthy households collectively walked away with more than $1 billion in total savings, an analysis of confidential tax records shows.”

“Republican and Democratic tycoons alike saw their tax bills chopped by tens of millions, among them: media magnate and former Democratic presidential candidate Michael Bloomberg; the Bechtel family, owners of the engineering firm that bears their name; and the heirs of the late Houston pipeline billionaire Dan Duncan.”

Sen. Lindsey Graham (R-SC) told the New York Times he called Joe Biden shortly after the election to try and repair their fractured friendship, allegedly telling the president-elect that he only attacked Biden’s son, Hunter, to satisfy Trump supporters.  Biden, however, was reportedly not interested in patching up the relationship.

New York Times: “For four years, Mr. Graham, a man who had once called Mr. Trump ‘a race-baiting, xenophobic bigot,’ exemplified the accommodations that so many Republicans made to the precedent-breaking president, only more vividly, volubly and candidly.”

“But Mr. Graham’s reaffirmed devotion has come to represent something more remarkable: his party’s headlong march into the far reaches of Trumpism. That the senator is making regular Palm Beach pilgrimages as supplicant to an exiled former president who inspired the Capitol attack and continues to undermine democratic norms underscores how fully his party has departed from the traditional conservative ideologies of politicians like Mitt Romney, Liz Cheney and Mr. Graham’s close friend John McCain.”

“The crush of new COVID-19 infections in Mississippi has become so dire that the state has turned to efforts reminiscent of the earliest days of the U.S. pandemic, when a field hospital was set up in New York’s Central Park and a medical ship was moored in the Hudson River,” Reuters reports,

“With an overload of coronavirus patients and a shortage of healthcare workers in the state, the University of Mississippi Medical Center opened up a 20-bed field hospital in its parking garage on Friday morning.”

Ed Yong: “In simple terms, many people who caught the original virus didn’t pass it to anyone, but most people who catch Delta create clusters of infection. That partly explains why cases have risen so explosively. It also means that the virus will almost certainly be a permanent part of our lives, even as vaccines blunt its ability to cause death and severe disease.”

Key takeaway from infectious disease expert Inci Yildirim: “If you’re vaccinated, you did the best thing you can do, and there’s no reason to feel pessimistic. You’re safe. But you will need to think about how safe you want people around you to be.”

“The spectacular collapse of Afghanistan’s military that allowed Taliban fighters to reach the gates of Kabul on Sunday despite twenty years of training and billions of dollars in American aid began with a series of deals brokered in rural villages between the militant group and some of the Afghan government’s lowest-ranking officials,” the Washington Post reports.

“The deals, initially offered early last year, were often described by Afghan officials as cease-fires, but Taliban leaders were in fact offering money in exchange for government forces to hand over their weapons.”

“Over the next year and a half, the meetings advanced to the district level and then rapidly on to provincial capitals, culminating in a breathtaking series of negotiated surrenders by government forces.”

Josh Marshall: “We’ve been in Afghanistan for either ten or twenty years because no one in authority was ready to endure this moment and not look back. I don’t know if Biden will pay a domestic political price for this denouement. But watching it all unfold I’m even more certain he made the right decision than I was even a day ago. Does anyone think we’ll look back a year from now and think, wow, I wish we were still garrisoning Afghanistan? I doubt it.

Someone had to make the decision that Bush, Obama and Trump did not and apparently could not. Biden did.”

A newly obtained transcript shows that Rudy Giuliani told federal agents it was okay to “throw a fake” during a political campaign, to which his then-law partner, Marc Mukasey, added, “there’s no obligation to tell the truth,” the Washington Post reports.

Mediaite: “Rudy Giuliani is now selling personalized video messages for $199 via the custom video app Cameo. Giuliani announced he was joining Cameo via Twitter on Monday — which comes amid numerous reports that he is struggling with legal fees surrounding his counsel to former President Donald Trump.”

New York Times: “The Biden administration, under pressure from families of victims of the Sept. 11 attacks, said on Monday that it intended to disclose some long-classified documents that the families think could detail connections between the government of Saudi Arabia and the hijackers who carried out the attacks.”

Olivier Knox: “A look at the carnival ride that is Republican politics in 2021 shows the GOP at odds with institutions and principles that used to be written into the party’s DNA, perhaps especially the idea government closest to the people knows best.”

“Instead, the so-called culture war — fights against ‘Big Tech,’ policies and ideas seen as ‘woke,’ and national efforts to promote coronavirus vaccines and other efforts to mitigate the resurgent pandemic — is now dominating the GOP and drives its parade of potential 2024 presidential contenders.”

“Florida Gov. Ron DeSantis is, in some ways, the poster politician for the trend of trying to wrest control over local decisions from local officials — though he has stiff competition from Texas Gov. Greg Abbott.”

Just two weeks after becoming Peru’s president, Pedro Castillo’s inexperience, “and his appointment to senior government positions of Marxist hard-liners, some implicated in criminality, have left this country that went through three presidents in one month last year once again on the brink of a political meltdown,” the Washington Post reports.

“The chaos has sounded the starting gun on an existential battle between the executive and an antagonistic, conservative-dominated legislature, with increasing talk of either the impeachment of the president or the dissolution of congress.”

Axios: “Biden will ask Congress to create reforms that will prevent drug companies from raising their prices ‘faster than inflation.’ He will also ask Congress to allow Medicare to negotiate drug prices, which it is currently prohibited from doing by law.”

“The Biden administration is receiving regular intelligence reports indicating Russian efforts to interfere in US elections are evolving and ongoing, and in fact, never stopped, despite President Joe Biden’s warnings to Russian President Vladimir Putin over the summer and a new round of sanctions imposed in the spring,” CNN reports.

Matt Yglesias: “A lot of liberals look at the crisis-mongering insanity from the left and right and say to themselves that we are living through a crisis of liberalism, but I don’t think that’s really true either.”

“I would say that we are living through some problems that are both serious and difficult, but not necessarily any more serious or more difficult than the problems of the past, and certainly not serious in a way that should cause one to doubt the basic tenets of liberalism. And then on top of that, we are living through some pretty ordinary political contestation that, as is inevitable in the course of things, involves some people going overboard at times.”

Politico: “Landlords are unsympathetic figures in the eyes of many struggling tenants, but they’re emerging as a new economic problem for Congress and the White House, after Democrats prioritized renters by pushing for the revival of the eviction ban earlier this month.”

“The Biden administration has yet to find a way to accelerate the release of federal rental aid, meaning property owners will continue to be squeezed until the eviction moratorium expires Oct. 3 or is struck down in court.”

New York Times: “The gallery is planning to sell 15 works by Hunter Biden, and is asking as much as $500,000 apiece. The prices — which are high for a novice artist — have raised questions in Washington about whether the works might attract buyers seeking to curry favor with the Biden White House.”

“In response, the administration has helped to develop a set of ethics guidelines that call on the gallery to keep the identity of buyers and other details of the sales from both the artist and the administration. Even though the art world is widely known for its secrecy and a lack of transparency, questions remain about how the arrangement will play out in practice.”