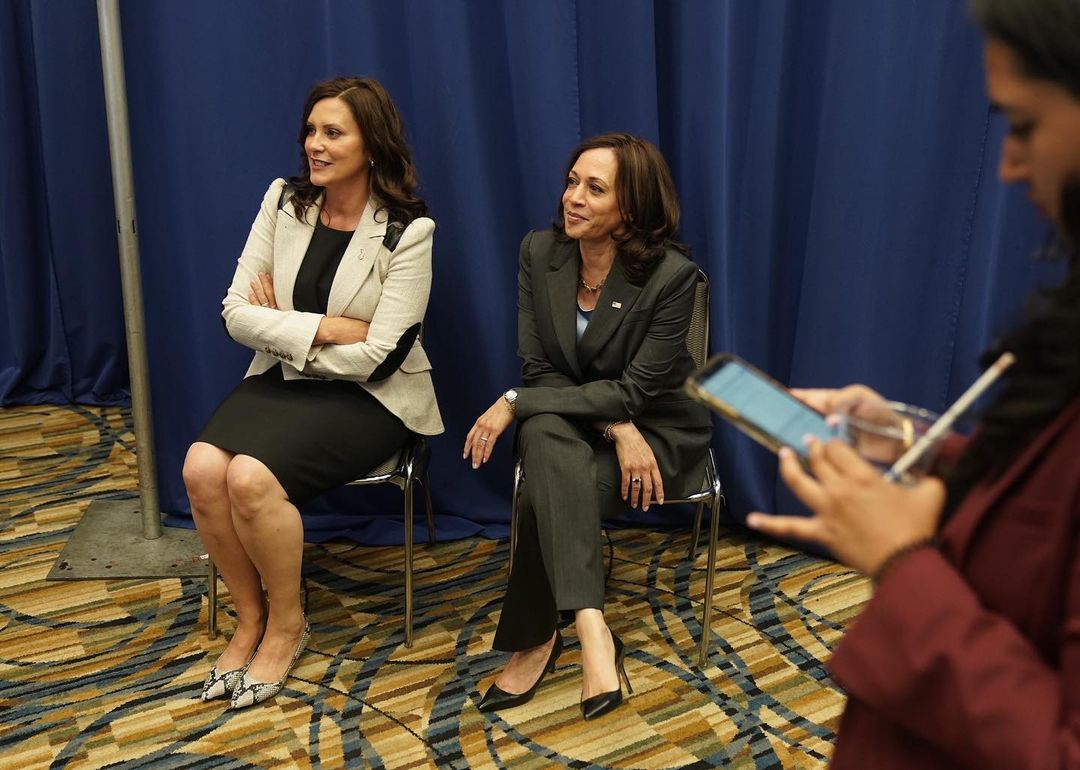 A new WIVB/Emerson College poll finds that if the Buffalo mayoral election was held today, a majority of likely voters say they would vote for incumbent mayor Byron Brown over Democratic nominee India Walton, 50% to 40%. Brown is running as a write-in candidate after losing the June primary election to Walton in a shocking upset. However, Walton will be the only candidate actually listed on the ballot on Nov. 2.

“The cyber expert on the ‘red team’ hired by MyPillow CEO Mike Lindell now says the key data underpinning the theory that China hacked the 2020 election unveiled at the Cyber Symposium is illegitimate,” the Washington Times reports.

“Lindell said he had 37 terabytes of ‘irrefutable’ evidence that hackers, who he said were backed by China, broke into election systems and switched votes in favor of President Biden.”

CALIFORNIA GOVERNOR — San Francisco Chronicle: “With ballots already arriving in the mail… Newsom said that the campaign had already invested $6.5 million in the largest get-out-the-vote effort ‘that’s ever been advanced in the state’s history.’”

“Newsom said the campaign has sent 17 million text messages reminding voters of the recall, and has 5,200 volunteers in the field. It is ramping up door-to-door canvassing and phone banking along with the state’s largest labor unions and other left-leaning organizations.”

Washington Examiner: “The group behind the campaign to recall California’s embattled governor has expressed its concerns over an obscure provision that allows voters to print their own ballots at home, arguing it could potentially pave the way for voter fraud.”

“When questioned about whether people could vote twice or canvassers could print out ballots for an entire neighborhood, Orange County Registrar of Voters Neal Kelley said the system will void the paper ballot if an online ballot is printed. Voters need to enter their driver’s license information and date of birth to receive an online ballot, which prevents anyone from accessing batches of ballots.”

Associated Press: “The former Olympian and reality TV personality sidestepped questions about whether she had lined up any lucrative book or TV deals connected to the September recall election that could remove Democratic Gov. Gavin Newsom from office.”

Politico: Caitlyn Jenner is back from Australia — and looking for a recall reboot.

NEW JERSEY REDISTRICTING — New Jersey Globe: “The New Jersey Supreme Court has picked John Wallace as the tiebreaker for the Congressional Redistricting Commission, siding with the choice of Democrats for the post.”

“The tiebreaker vote could have national implications in President Joe Biden’s midterm elections, where Republicans are just five seats away from controlling the U.S. House of Representatives.”

DESANTIS 2024 — Tampa Bay Times: “From the week of the 2020 election through February, the network asked DeSantis to appear on its airwaves 113 times, or nearly once a day. Sometimes, the requests came in bunches — four, five, even six emails in a matter of hours from producers who punctuated their overtures with flattery.”

“There are few surprises when DeSantis goes live with Fox. ‘Exclusive’ events… are carefully crafted with guidance from DeSantis’ team. Topics, talking points and even graphics are shared in advance… By turning to DeSantis to fill the many hours of airtime once devoted to former President Donald Trump, Fox has made Florida’s hard-charging leader one of the country’s most recognizable Republicans. That has given DeSantis a leg up on others who may seek the party’s nomination for president in 2024.”

“Democratic National Committee members are growing increasingly frustrated by the White House’s influence on their political operation, causing friction between aides to President Biden and the leading party organization promoting his agenda,” The Hill reports.

Said one DNC member: “The White House is not thinking about how to build the electorate writ large, but they’re concentrating on a few states. It’s all about the presidential reelect.”

CUOMO — New York Times: “His huge stock of campaign funds — the most money retained by a departing New York politician in recent memory — affords him a range of possibilities, including the chance to attempt an eventual comeback or to play a role in the state’s political life by donating to other candidates.”

A must-read piece from Miriam Pawel, on covering Mario and Andrew Cuomo:

“Even in those early years after Mario Cuomo was first elected governor, in 1982, the differences between the two men were as apparent as their similarities. Both were ruthless competitors, prone to bullying. Both were control freaks, inclined to trust very few people outside a small circle of confidants.”

“But Mario Cuomo’s sharp elbows on the basketball court and pugilistic verbal gymnastics were wrapped in moral complexity, intellectual heft and Jesuitical questioning. His son exhibited none of those qualities. He had inherited his father’s fierce, win-at-any-cost competitive spirit without the humanity or introspection.”

“White, non-Hispanic Americans now account for less than six in 10 people in the U.S. — a more precipitous drop over the past decade than experts expected — and they’re no longer the racial-ethnic majority in 13% of U.S. counties,” Axios reports.

Redistricting expert David Wasserman has an early read on the U.S. Census data: “Based on the strong urban and weaker rural numbers I’m seeing, this is a much more favorable Census count than minority advocacy groups and Democrats had feared.”

Nate Cohn: “It’s a pretty decent set of data for Democrats in redistricting.”

Axios: “Almost all of the country’s population growth occurred in large metro areas over the decade.”

“The Biden administration is receiving regular intelligence reports indicating Russian efforts to interfere in US elections are evolving and ongoing, and in fact, never stopped, despite President Joe Biden’s warnings to Russian President Vladimir Putin over the summer and a new round of sanctions imposed in the spring,” CNN reports.

Democrat Terry McAuliffe’s newest TV ad features a couple who describe themselves as lifelong Republicans saying they can’t vote for GOP nominee Glenn Youngkin because “he’s way too much about Donald Trump.”

So far, every single public poll of the Virginia governor’s race has come from Republican pollsters, and every single one has shown the Democrat, former Gov. Terry McAuliffe, in the lead. So, too, with the latest entry, a late-July survey from co/efficient on behalf of a group called Conservatives for Clean Energy that finds McAuliffe ahead of Republican Glenn Youngkin by a 45-40 margin.

If anything, the numbers might understate McAuliffe’s standing, since respondents give Joe Biden just a 47-46 job approval score; in FiveThirtyEight’s national average, Biden has a 50-43 rating, and Virginia is now decidedly to the left of the country as a whole.

What’s particularly concerning, though, is the overall dearth of polling: Four years ago, there’d been 20 polls released by this date in the previous race for governor, including several from independent pollsters. This cycle, we’ve only seen five so far, and none from an independent outfit.

Alex Samuels: “Touting ambitious bill packages hasn’t worked well for Democrats in the past. Back in 2010, the Affordable Care Act faced a similarly divided Democratic Party, and in fact, subsequent research suggests that the law hurt Democrats in that year’s midterms.”

“One 2012 study found that Democrats who voted in favor of the ACA saw their vote share drop by 8.5 percentage points, on average.”

“It’s also possible that voters will be turned off if the fight over passing the infrastructure and reconciliation bills drags on too long and is perceived as too complicated. Research has found that voters often punish — rather than reward — parties that move to achieve their policy goals.”

IOWA 2024 — “Donald Trump’s fundraising committee has hired two political operatives familiar with campaigns in Iowa, the state that typically kicks off the race for the White House, signaling his interest in running in 2024,” Bloomberg reports.

Texas Tribune: “Since before sunset Wednesday, state Sen. Carol Alvarado had been on her feet speaking, not allowed to sit or lean against her desk, on the Senate floor.”

“Unable to take bathroom breaks or drink water, she had worn a back brace, eyeglasses and running shoes and talked slowly behind a desk stacked with papers and with a microphone in her hand as she mounted a 15-hour filibuster. The target of her efforts was Senate Bill 1, the GOP’s priority bill that would place new restrictions on voting that many opponents say would disproportionately suppress ballots from voters of color and disabled voters.”

“But ultimately, her speaking marathon could only delay the passage of the bill in the Republican-controlled Senate. Shortly after she finally stepped away from her desk around 9 a.m., the Senate voted to advance the measure on a 18-11 party-line vote.”

NEW YORK GOVERNOR — NBC Today: “Kathy Hochul, 62, is set to become the first female governor in New York history and the 57th governor overall when she is sworn into office Aug. 24 when Cuomo’s resignation takes effect. She said she plans on running for a full term in next year’s gubernatorial election.”

Said Hochul: “I fully expect to. I’m prepared for this. I’ve led a life working in every level of government from Congress to local government. I am the most prepared person to assume this responsibility, and I’m going to ask the voters at some point for their faith in me again.”

Thanks to Gov. Andrew Cuomo’s prolonged departure period (even Hochul groused that his two weeks’ notice was “not what I asked for”), the new governor’s transition period has not even begun, making it awkward for any would-be rivals to speak openly about their intentions. And while a large number of Democrats saw their names mentioned or even declined to rule out bids against Cuomo over the last few months, Hochul’s ascension—marked in particular by her status as the state’s first female governor—has reset the political calculus.

As a consequence, it makes sense to focus on potential candidates who’ve surfaced in the wake of Cuomo’s resignation announcement, since someone who was willing to take on Cuomo may not necessarily feel the same way about Hochul, and vice-versa. The New York Times’s Katie Glueck has some of the first reporting on our new post-Cuomo world, saying that New York City Public Advocate Jumaane Williams is “thought to be exploring a run” and could kick off a campaign “in the coming weeks,” according to an unnamed Williams adviser.

Williams’ name had in fact come up previously: As Cuomo’s sexual misconduct scandal crescendoed in late February, he declined to rule out a bid. But Williams has also run against Hochul before, holding her to a 53-47 win in the 2018 primary, even as Cuomo was beating his own challenger, actress Cynthia Nixon, by a far larger 66-34 spread on the very same day.

Glueck also says that Suffolk County Executive Steve Bellone “is strongly considering a run; he, too, had reportedly been weighing a challenge to Cuomo, but given his decidedly moderate reputation, he may not have a ton of appeal for primary voters.