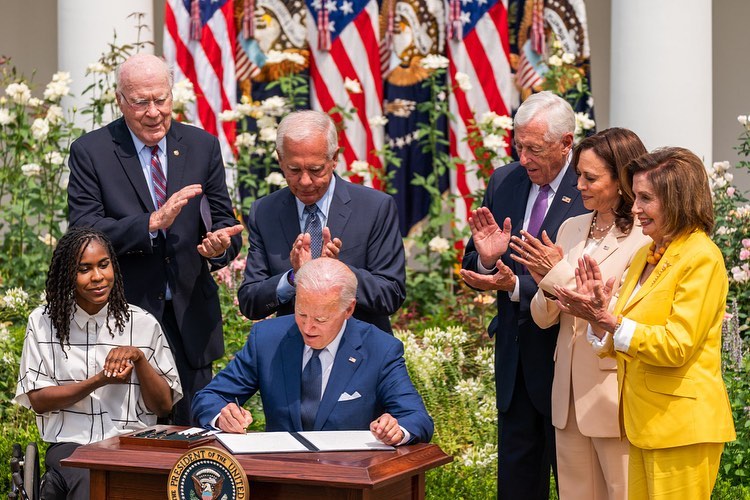 Playbook: “Speaker Nancy Pelosi is calling the House back from summer recess Aug. 23 to vote on the party’s $3.5 trillion budget, but she has a problem: Six moderate House Democrats have indicated that they’ll oppose the fiscal blueprint unless the speaker puts the Senate-passed BIF up for a vote at the same time.”

“The speaker can lose only three votes. So this sets up another Washington staredown, this time pitting Pelosi against some of her most electorally vulnerable members, whom she often bends over backward to protect.”

“If we know anything from covering Pelosi and the House the past decade, it’s that she runs her caucus with “an iron fist in a Gucci glove.” Her ability to corral her members — whether with sweeteners like committee posts or by simply scaring them into line — is almost legendary. Cross her at your own peril.”

This is not a joke: House GOP leader Kevin McCarthy is selling t-shirts to his supporters with the word “moron” printed on the front.

McCarthy is apparently trying to capitalize on Speaker Nancy Pelosi recently calling him a moron, but I’m not sure they thought this one through.

Associated Press: “Gov. Greg Abbott appealed for out-of-state help to fight the third wave of COVID-19 in Texas while two more of the state’s largest school districts announced mask mandates in defiance of the governor.”

“The Republican governor has directed the Texas Department of State Health Services to use staffing agencies to find additional medical staff from beyond the state’s borders as the delta wave began to overwhelm its present staffing resources.”

“All 73 Tennessee House Republicans signaled their support on Wednesday for a special session to limit the authority of local officials to make rules aimed at preventing the spread of COVID-19, as lawmakers fumed over mask requirements in a handful of school districts,” the AP reports.

Texas hospitals are on the brink of catastrophe, close to being completely overwhelmed by COVID-19 patients, the Texas Tribune reports.

Associated Press: “California will become the first state in the nation to require all teachers and school staff to get vaccinated or undergo weekly COVID-19 testing.”

Hawaii Gov. David Ige (D) said his state will re-impose COVID-19 restrictions limiting social gatherings to avert straining the state’s healthcare, Reuters reports.  “Hawaii, with more than 60% of its population fully vaccinated, has witnessed a rise in cases by 168% between July 26 and August 8.”

Vox: “The problem is the unvaccinated population. If more people got the vaccines, the current surge wouldn’t be as big; it certainly wouldn’t lead to the levels of hospitalization and death now seen across the US. This was true months ago, and remains true today.”

“Forty-six GOP senators are warning that they will not vote to raise the debt ceiling, as Republicans ramp up pressure on Democrats to increase the nation’s borrowing limit on their own,” The Hill reports.

“All but four members of the Senate GOP caucus signed onto the letter — addressed to ‘fellow Americans’ and released Tuesday night — that warns that the 46 GOP senators won’t support a debt hike, regardless of whether it’s attached to another bill or brought up on its own.”

“It’s been more than six months since Donald Trump left office and, despite pleas from multiple friends and advisers, the former president has kept refusing to mount anything resembling a real effort to get his supporters vaccinated,” the Daily Beast reports,

“According to four people who’ve independently spoken to Trump about a potential pro-vaccine campaign, the former president has shown little interest in tying his name to broader efforts to get people inoculated.”

“Byung Pak, a former U.S. attorney in Atlanta, told congressional investigators on Wednesday that his abrupt resignation in January had been prompted by Justice Department officials’ warning that President Donald Trump intended to fire him for refusing to say that widespread voter fraud had been found in Georgia,” the New York Times reports.

Pak stepped down with no notice on Jan. 4, saying that he had done his best “to be thoughtful and consistent, and to provide justice for my fellow citizens in a fair, effective and efficient manner.”

“The Taliban captured a strategic provincial capital near Kabul on Thursday, the 10th the insurgents have taken in a weeklong sweep across Afghanistan just weeks before the end of the American military mission there,” the AP reports.

“New Zealand Prime Minister Jacinda Ardern has said that that the country’s borders will remain closed until at least the end of the year,” the BBC reports.

“She said an elimination strategy was the best way to keep Covid-19 out and the economy open.”

New York Times: “That the United States remains largely closed has dismayed Europeans and frustrated their leaders, who are demanding that Europe’s decision to open its borders be reciprocated.”

“For some European families, the continued ban has compounded one of the deepest sorrows of the pandemic — separation itself — as loved ones become ill across closed borders and family elders grow fearful they may never see their loved ones again.”

“The Biden White House increasingly views rising gasoline prices as a source of potential political peril — and is now asking some of the world’s biggest oil producers to pump more oil,” Axios reports.

“This trend, combined with a fragile economic recovery threatened by the Delta variant of the coronavirus, and inflation beginning to bite consumers, could threaten the administration’s ambitious congressional agenda for late summer and early fall.”

“The Biden administration is intensely scrutinizing coronavirus vaccines’ effectiveness over time, facing the daunting task of timing booster shots right while still convincing the unvaccinated that getting the jab is worthwhile,” Axios reports.

“The vaccines still work incredibly well at protecting against severe disease and death, meaning the benefits of getting vaccinated are immense. But it’s less clear how well they’re working at preventing infection, which has huge public health implications with so many Americans still unvaccinated.”

“Sen. Rand Paul revealed Wednesday that his wife bought stock in Gilead Sciences — which makes an antiviral drug used to treat Covid-19 — on Feb. 26, 2020, before the threat from the coronavirus was fully understood by the public and before it was classified as a pandemic by the World Health Organization,” the Washington Post reports.

“The disclosure, in a filing with the Senate, came 16 months after the 45-day reporting deadline set forth in the Stock Act, which is designed to combat insider trading.”

Politico: “For the past two weeks, Biden and his allies have publicly escalated a war of words and with DeSantis on Twitter, in speeches by the president and in White House press briefings. Biden advisers see DeSantis — who has defiantly fought mask mandates as infections and hospitalizations skyrocketed in the battleground state — as a foil to a president whose strength is his empathetic style and safety-first response to coronavirus that helped him defeat DeSantis’ benefactor, President Trump, nine months ago.”

“Amid the Covid explosion, DeSantis’ constant criticisms as well as his controversial policies and a barrage of media questions about the governor, White House advisers say Biden and the team had no choice but to take on the Republican. But the president has seldom gone to such lengths to train so much fire on a critic other than Trump.”

“Virginia’s Republican gubernatorial nominee Glenn Youngkin has repeatedly praised Florida Gov. Ron DeSantis in recent months as a model for COVID-19 mitigation efforts, specifically lauding DeSantis’ decision to reopen his state and ban mask-wearing requirements — even in places where large swaths of the population are ineligible for vaccines,” the American Independent reports.

“As recently as Aug. 6, as COVID-19 cases in Florida were surging, Youngkin told right-wing radio host John Fredericks that he supported DeSantis’ continued decision to ban mask wearing requirements in businesses and schools.”

Albany Times Union: “The State Police investigator who said Gov. Andrew Cuomo sexually harassed her had moved up in the ranks of his protective detail quickly, securing a position as the governor’s driver in a much shorter timeframe than is norma.”

New York Lt. Gov. Kathy Hochul (D) said that she is ready to take over as governor from Andrew Cuomo in two weeks, and vowed not to have a “toxic” workplace, CNBC reports.

Hochul also said she would get rid of any Cuomo staffer who was involved in “unethical” conduct in retaliating against at least one of the multiple women who accused the disgraced Democratic governor of sexual harassment.

She added: “The governor and I have not been close.”

The Atlantic: Could Cuomo mount a comeback?

During a filibuster, Alvarado would be limited to speaking on issues relevant to the bill without sitting or leaning on her desk, leaving the floor for a bathroom break or eating or drinking.

A group of nearly 60 House Democrats left the state a month ago in an attempt to block passage of a GOP-backed voting bill by denying them a quorum.

“Some progressives are unhappy with his bent toward easing financial regulations that were put in place after the 2008 crisis and think the central bank should have someone more in sync with Democratic politics in charge.”

Politico: “In the first three months of 2021, the Biden administration hired more than twice as many senior government executives than Donald Trump did in the same timeframe, a staffing spree aimed at rebuilding agencies rocked by turmoil during Trump’s war on the so-called ‘deep state.’”

“All told, Biden hired at least 319 senior executives in his first three months. The biggest beneficiaries? The Department of Housing and Urban Development tops the list, with Biden increasing senior staffing by 6 percent from Trump’s September 2020 levels. That’s followed by the Social Security Administration and the Treasury Department, with 4 percent and 3 percent bumps respectively.”

“President Joe Biden on Wednesday nominated acting US Solicitor General Elizabeth Prelogar to permanently take on the role of representing the US government in cases before the Supreme Court,” CNN reports.  “Prelogar has played a key role managing a wave of Biden administration early reversals on legal positions held under the Trump administration.”

Fred Hiatt: “When President John F. Kennedy took office in 1961, he needed Senate approval for 779 of his appointments.”

“Sixty years later, despite efforts at reform and widespread recognition of the irrationality, President Biden needs Senate approval for 1,237 positions — an increase of 59 percent.”

“The Post and the Partnership are tracking 799 of those positions (leaving out some advisory boards and less essential jobs). As of this week, only 112 of them have been filled.”