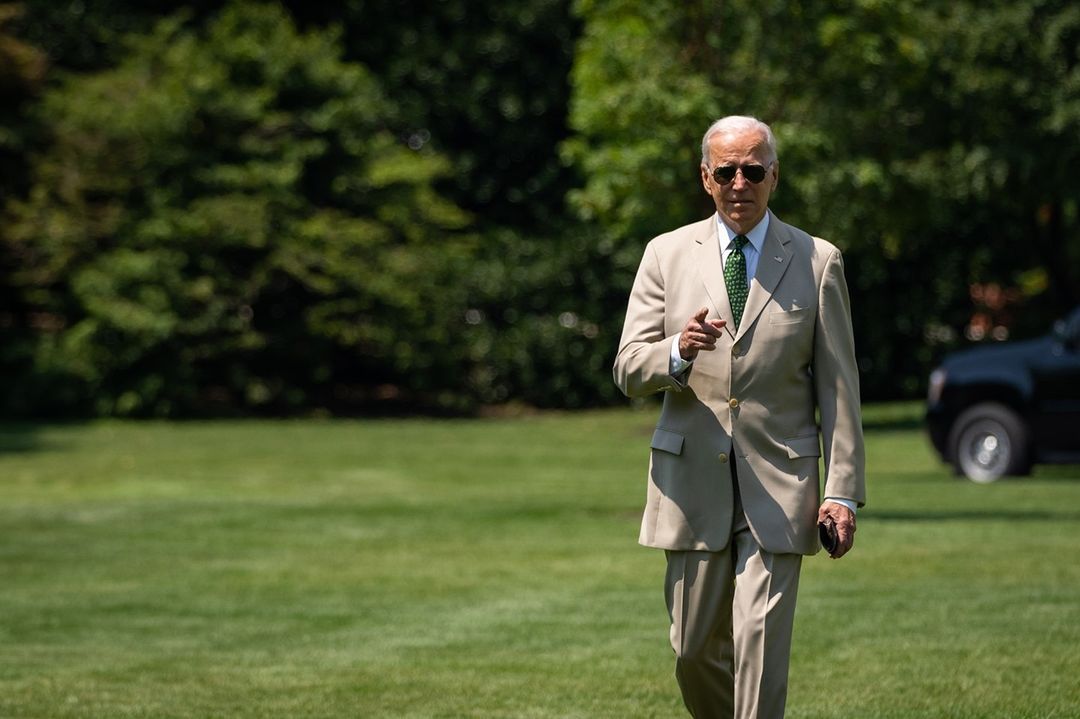 “The Senate on Sunday night voted to end debate on a roughly $1 trillion bipartisan infrastructure bill, putting it on a glide path, albeit still a lengthy one, to passing this week,” The Hill reports. “Senators voted 68-29 to end debate on the bill, which required 60 votes.”

CBS News: “The final vote could happen late Monday or early Tuesday morning unless the opponents yield back some of their time.”

Punchbowl News: “Here’s a question that’s bouncing around Senate circles: Will the Senate vote to pass the infrastructure bill at 4 a.m. Tuesday morning? That’s the earliest the chamber can vote on final passage for the $1 trillion measure, if there’s no agreement to speed things up.”

“But Schumer can try to get consent to move the vote to a more rational time, let’s say 11 a.m., for instance. But as we saw over the weekend, any one senator can block a time agreement. So we won’t believe that will happen until it happens.”

“Schumer plans to move right into the debate over the budget resolution as soon as the infrastructure bills passes. There’s 50 hours of debate divided equally between both sides, and then a ‘vote-a-rama.’”

“Senate Majority Leader Chuck Schumer on Monday released the full text of Democrats’ $3.5 trillion budget resolution, which the Senate is expected to pass without any Republican votes as early as this week,” Axios reports.

“What it doesn’t include: Language that would lift the debt limit. This means Senate Democrats face an ugly fight with Senate Minority Leader Mitch McConnell and Republicans over raising the limit, as they’ll need at least 10 GOP votes to meet the 60-vote requirement under regular order.”

Senate Majority Leader Chuck Schumer told Senate Democrats on Monday that once the chamber passes the bipartisan infrastructure package this week, they will “immediately move” to pass a budget resolution that will allow their party to craft a $3.5 trillion social safety net bill, NBC News reports.

New York Times: “The fallout from a damaging report that found Gov. Andrew Cuomo sexually harassed 11 women widened on Monday when Roberta A. Kaplan, a nationally prominent lawyer with ties to the governor, resigned from Time’s Up, the organization founded by Hollywood women to fight sexual abuse and promote gender equality.”

“Ms. Kaplan, the chairwoman of Time’s Up and the co-founder of its legal defense fund, was one of several prominent figures whom the report found to be involved in an effort to discredit one of Mr. Cuomo’s alleged victims, and she has continuing legal ties to a former Cuomo aide accused of leading that effort.”

“The top aide to New York Gov. Andrew M. Cuomo resigned on Sunday night after the release last week of a searing report by the state attorney general’s office that detailed her role in an effort to discredit a former aide who accused Cuomo of harassment,” the Washington Post reports.

“The departure of Melissa DeRosa, who held the title of secretary to the governor, represents a huge blow to Cuomo. She served as his fiercest defender and top aide since 2017, and was considered the ultimate loyalist after working for him for the past decade.”

Albany Times Union: “DeRosa’s departure is yet another indication that governor is running out of allies.”

“A lawyer for Cuomo appeared to dig him deeper yesterday as she previewed his sexual harassment defense, arguing that running his hands over a state trooper on the job wasn’t necessarily criminal — or even unacceptable,” Axios reports.

Punchbowl News: “Treasury Secretary Janet Yellen will tell Congress today to lift the debt limit using ‘regular order,’ which means not through a reconciliation bill, according to a statement Yellen will release later today.”

“This is a big deal because Senate Democrats are going to release their $3.5 trillion budget resolution this morning, and if they want to lift the debt limit using this parliamentary procedure, they would have to include instructions for that in the resolution. A reconciliation bill can’t be filibustered and requires only a simple majority to pass, which makes it an attractive vehicle to lift the nation’s borrowing limit.”

Playbook: “Until now the Biden administration hasn’t taken a position. Yellen’s statement is a clear sign that the reconciliation bill, which will be released later today, will not address the debt ceiling and that the two parties are headed toward a showdown, likely in late September, when Democrats may add a debt ceiling increase to a short-term funding measure needed to avert a government shutdown.”

Former President Donald Trump told Fox News that critics would have been so much harder on him than on President Joe Biden had there been a COVID-19 “attack” on his watch like the one occurring now.

Said Trump: “Could you imagine if I were president right now and we had this massive attack from the coronavirus? If that were me, they would say, ‘What a horrible thing, what a horrible job.’ And I don’t ever hear that.”

This is an attempt to rewrite the history of the coronavirus pandemic — and a bet that voters have short memories.

New York Times: “If the Taliban had seized three provincial capitals in northern Afghanistan a year ago, like they did on Sunday, the American response would most likely have been ferocious. Fighter jets and helicopter gunships would have responded in force, beating back the Islamist group or, at the very least, stalling its advance.”

“But these are different times. What aircraft the U.S. military could muster from hundreds of miles away struck a cache of weapons far from Kunduz, Taliqan or Sari-i-pol, the cities that already had been all but lost to the Taliban. The muted American response on Sunday showed in no uncertain terms that America’s 20-year war in Afghanistan is over. The mismanaged and exhausted Afghan forces will have to retake the cities on their own, or leave them to the Taliban for good.”

“A federal judge has granted a preliminary injunction, which paves the way for the Norwegian Cruise Lines to require documentation confirming a guest’s vaccination status prior to boarding,” NBC Miami reports.

Stephen Collinson: “A burst of new disclosures exposing the extraordinary efforts by ex-President Donald Trump to steal power after his election defeat constitute a grave warning about the future and his potential bid to recapture the White House.”

“The audacity of the former President’s attempts to subvert the law by weaponizing the Justice Department not only underscores how close the United States came to a full blown constitutional crisis this year. It also emphasizes that any attempt by Trump to use a war chest already worth $100 million to try to recapture the White House in 2024 would represent a mortal threat to democracy and the rule of law from a leader who was undeterred even by his own first impeachment.”

“Nations have delayed curbing their fossil-fuel emissions for so long that they can no longer stop global warming from intensifying over the next 30 years, though there is still a short window to prevent the most harrowing future, a major new United Nations scientific report has concluded,” the New York Times reports.

“Even if nations started sharply cutting emissions today, total global warming is likely to rise around 1.5 degrees Celsius within the next two decades, a hotter future that is now essentially locked in.”

“At 1.5 degrees of warming, scientists have found, the dangers grow considerably. Nearly 1 billion people worldwide could swelter in more frequent life-threatening heat waves. Hundreds of millions more would struggle for water because of severe droughts.”

Green That Life: Opening our eyes to climate change myths.

New York Times: “When Gov. Andrew Cuomo was holding his marathon sessions of news briefings during the peak of the coronavirus crisis, he was often flanked by his closest aides.”

“When Mr. Cuomo published a book that portrayed him as a heroic leader during the pandemic, he highlighted the roles played by a slew of his top aides. He made no mention of Ms. Hochul.”

“But for Ms. Hochul, being marginalized by her boss might now be a blessing.”

Dan Balz: “New York Gov. Andrew Cuomo (D) knows only one set of instincts when challenged: deny, resist and fight. This has marked a public career that has seen him as secretary of housing and urban development, state attorney general and now as a three-term governor of New York. He might think this has served him well. It has been his undoing.”

“His legacy has been soiled by hubris, temperament and a sense of entitlement.”

“The United States is the greatest country in the world — I will always think that — but don’t tell me it’s freer than Hungary cause that’s a lie.”  — Fox News anchor Tucker Carlson, quoted by Daily News Hungary. Hungary has banned transsexuals and homosexuals. America is freer than Hungary and that’s the truth.

“President Biden and Senate Democrats are off to a fast start in pushing through judicial nominees, outpacing former President Trump’s early record in confirming judges to the federal bench,” The Hill reports.

Brittany Commisso, an aide who accused Gov. Andrew Cuomo (D) of groping her, spoke publicly to CBS News for the first time.

Said Commisso: “What he did to me was a crime. He broke the law.”

Associated Press: “After more than six months of work combating the coronavirus, negotiating a bipartisan infrastructure bill and repairing the U.S. image abroad, Biden should be heading out on vacation and a traditional August break from Washington. But with legislative work on the infrastructure bill keeping the Senate in session for a second straight weekend, and likely through next week, Biden hasn’t gone far — just home to Wilmington, Delaware, as he has done most weekends since taking office.”

“Biden will spend some of next week at the White House before he decamps again, either for Delaware — he also owns a home in Rehoboth Beach — or Camp David, the official presidential retreat in Maryland’s Catoctin Mountains.”

Politico: “The fire, which has burned for 23 days and forced mass evacuations, razed the Gold Rush town of Greenville on Thursday, destroying 91 buildings and damaging five others. Smoke from the blaze has blown to lower parts of Northern California, including the state capital of Sacramento where the air quality index on Friday reached ‘unhealthy’ levels.”

CNN: “Top US retail and food chains have updated their mask policies since the US Centers for Disease Control and Prevention said this week that fully vaccinated people should wear masks indoors in areas with substantial Covid-19 transmission.”

Randi Weinbarten, the head of the American Federation of Teachers, told NBC News that the union’s leadership should consider implementing a vaccine mandate for teachers in schools.

Axios: “The move would mark a policy reversal from last October, when the union allowed vaccinations on a voluntary basis. Weingarten called the Delta variant of the virus ‘alarming’ and voiced concern for children who cannot yet be vaccinated.”

Tampa Bay Times: “Florida’s positivity rate rose to 18.5 percent in the past week, up from 18.1 percent the week before.”