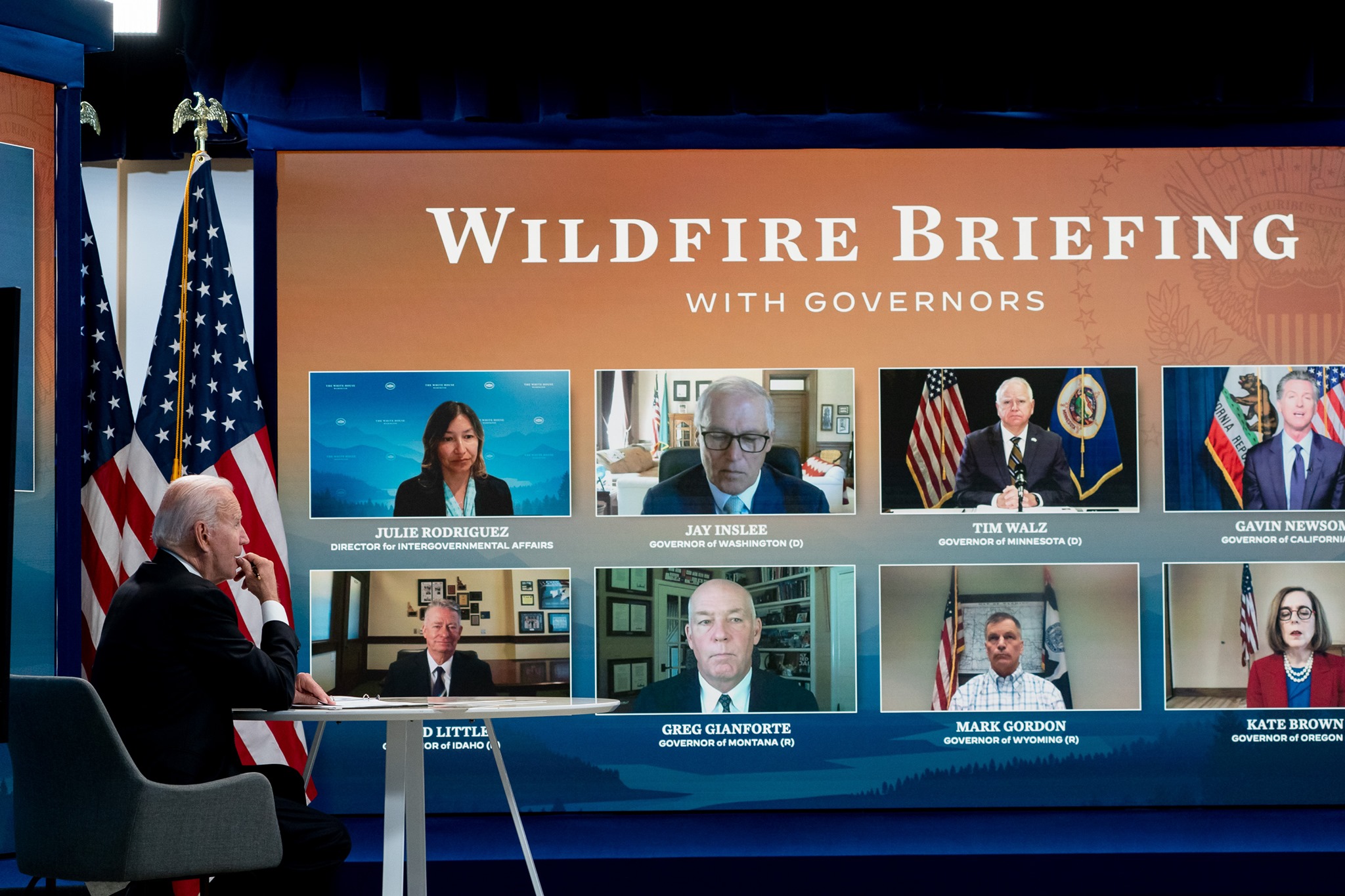 Playbook: “Chuck Schumer is about to double-dog dare Mitch McConnell and his members to vote against a debt ceiling increase this fall. Just weeks after the minority leader implored his counterpart to tack a debt ceiling increase on to their party’s massive reconciliation bill — lifting the $28 trillion borrowing cap without any GOP votes — Schumer instead is maneuvering to make Republicans squirm.”

“The tentative plan: Tack the debt-ceiling hike on to a short-term funding bill designed to avert a government shutdown at the end of September, a move that would require GOP support. The Democratic leader is, in short, betting the GOP will cave rather than risk the blame for destabilizing an already shaky economy.”

“The entire situation gives us flashbacks to when Republicans demanded spending cuts in return for raising the borrowing cap while Barack Obama was in the White House. The brinkmanship led Standard & Poor’s in 2011 to downgrade the nation’s credit for the first time ever.”

Politico: “Senate Minority Leader Mitch McConnell promised Thursday that Republicans will not support a debt ceiling hike, just as Democrats have signaled they plan to take a path that would require Republican support.”

“Notably, McConnell did not mention the possibility of GOP cooperation when it comes to a debt ceiling suspension — a much more palatable strategy deployed by both parties in recent years that essentially pauses the issue until a later date. Two years ago, Republicans and Democrats struck a budget deal with former President Donald Trump’s administration that suspended the debt limit until July of this year.”

“Of­fi­cials in the New York state As­sem­bly said their im­peach­ment in­ves­ti­ga­tion of Gov. An­drew Cuomo is near­ing com­ple­tion and set an Aug. 13 dead­line for him to sub­mit ev­i­dence in his de­fense,” the Wall Street Journal reports.

New York Times: “The pillars of Mr. Cuomo’s political base now appear to be cracking beneath him, as he suffers consequential defections from core constituencies, including labor, white suburban lawmakers and Black political leaders.”

“His only apparent hope is that, during the time it takes to draw up impeachment papers as the State Assembly advances its investigation, the reservoir of public good will he earned early in the pandemic will stifle the sentiment against him in the legislature and elsewhere. Certainly, in interviews on Wednesday across the state, not all voters saw the report as decisive.”

Punchbowl News: “The Congressional Budget Office is expected to release their score for the bipartisan infrastructure bill Thursday, sources in both parties told us. This will be a key moment for the infrastructure bill, which is, at the moment, gliding through the Senate with little opposition. If there’s a moment when the G10 proposal could have trouble, it would be if a ‘bad’ CBO score comes out.”

The CBO released an analysis saying the $1 trillion bipartisan infrastructure package would add $256 billion to the federal deficit over the next decade, a difficult pill to swallow for GOP senators who have insisted on paying for the entire cost of the legislation, The Hill reports.

Wall Street Journal: “The Biden administration’s latest eviction moratorium is set to face an immediate and possibly fast-moving legal challenge that could present high hurdles for the White House.”

CNBC: “About half of U.S. states withdrew federal funds for the unemployed months early to encourage out-of-work residents to find a job. But mounting evidence shows that policy gambit hasn’t yet paid off.”

“UKG, a payroll and time-management firm, found that shifts among hourly workers in those states grew at about half the rate as states that continued the benefit — the opposite trend of what one might expect.”

“The number of Americans receiving financial help through the nation’s welfare system ebbed last year, even as economic fallout from the coronavirus pandemic gripped the nation,” the Washington Post reports.

“U.S. policymakers are becoming increasingly concerned about the rising price of housing for both homeowners and renters, as the broadest global house price boom for at least two decades drives up living costs,” the Financial Times reports.

“Physicians working in Covid hot spots across the nation say that the patients in their hospitals are not like the patients they saw last year,” the New York Times reports.

“Almost always unvaccinated, the new arrivals tend to be younger, many in their 20s or 30s. And they seem sicker than younger patients were last year, deteriorating more rapidly.”

“Doctors have coined a new phrase to describe them: ‘younger, sicker, quicker.’ Many physicians treating them suspect that the Delta variant of the coronavirus, which now accounts for more than 80 percent of new infections nationwide, is playing a role.”

The increasing rates of new COVID-19 cases, hospitalizations and deaths in Texas are showing steeper jumps than past surges, the Associated Press reports.

“The delta variant of the coronavirus is ravaging hospitals in Tennessee, and pediatric wings won’t escape the crisis,” the Tennessean reports.

“The delta variant is rapidly spreading among children — who are quickly showing symptoms after possible exposure, possibly amounting to a much faster incubation time than previous versions of the virus.”

The United States hit a six-month high for new COVID cases with over 100,000 infections reported on Wednesday, according to a Reuters tally, as the Delta variant ravages areas where people did not get vaccinated.

Dr. Anthony Fauci told McClatchy that cases driven by the delta variant are rising in a “very steep fashion” across the United States and may double in the coming weeks to 200,000 cases a day.

Rick Hasen: “Come 2024, crass and boorish unsubstantiated claims of stealing are likely to give way to arcane legal arguments about the awesome power of state legislatures to run elections as they see fit.”

“Forget bonkers accusations about Italy using lasers to manipulate American vote totals and expect white-shoe lawyers with Federalist Society bona fides to argue next time about application of the ‘independent state legislature’ doctrine in an attempt to turn any Republican presidential defeat into victory.”

Bloomberg: “Australia will give one-off cash payments to Indigenous ‘Stolen Generations’ survivors who were forcibly removed from their families as children to assimilate them into White communities, a practice that lasted for decades before finally ending in the 1970s.”

Adam Serwer: “The FOP has many reasons to remain quiet. Much of its rank-and-file membership is strongly supportive of Trump, whom the organization endorsed and worked to elect in 2016 and 2020. FOP leaders also know that some off-duty officers were in the mob, and might not want to suggest that they should be fired or prosecuted. And they probably also do not want to antagonize right-wing voters who will reflexively support their members as long as any police abuses are aimed at the communities those voters hate and fear.”

“All of these reasons, however, are a tremendous indictment of police unions in general and the FOP in particular. The group has placed its parochial interests ahead of the needs of the public, from whom police derive their authority, and ahead of its sworn brothers and sisters in Washington, who drew the wrath of a political constituency that police unions would prefer not to antagonize. If a commitment to ‘law and order’ does not include support for the peaceful and democratic transition of power, it is meaningless.”

“Texas Republicans will redouble their efforts to pass new voting restrictions by convening a second special House session this weekend, hardening a stalemate with Democratic legislators whose exodus to Washington had left the bill in limbo while they push for federal voting rights legislation,” the Washington Post reports.

Associated Press: “The requirement would come as part of the administration’s phased approach to easing travel restrictions for foreign citizens to the country. No timeline has yet been determined, as interagency working groups study how and when to safely move toward resuming normal travel. Eventually all foreign citizens entering the country, with some limited exceptions, are expected to need to be vaccinated against Covid-19 to enter the U.S.”

Texas Tribune: “Two years later, as El Paso remembers the victims, they’re also reminded of the broken promises made by top leadership in Texas in the wake of the shooting. The alleged gunman from North Texas drove 10 hours to El Paso to, in his own words posted on a racist online platform, ‘stop the Hispanic invasion of Texas.’”

“But two years after the attack, some of the conditions that led to the shooting remain entrenched; violence by extremist groups is on the rise according to the FBI and the U.S. Department of Justice; and rhetoric describing migrants as criminals and invaders is now espoused by Texas’ Republican leadership, including Abbott.”

“And in what some call an affront to the victims’ families, Texas Republicans expanded gun rights earlier this year when the state Legislature passed a permitless carry bill.”

“The Mexican government said Wednesday it plans to file legal action against several major U.S.-based gun manufacturers, alleging that lax controls contribute to the illegal flow of weapons over the border,” the Washington Post reports.

“The unusual suit is expected to be filed in U.S. federal court in Boston, since some of the manufacturers are headquartered in Massachusetts, according to the documents. The suit — which seeks unspecified financial compensation from the companies — does not target the U.S. government.”

“An official resigned as chairman of a county board in Michigan, the latest fallout from his decision to give himself a $25,000 bonus with federal COVID-19 relief money and reward others in the community,” the Associated Press reports.

“Jeremy Root (R) will remain one of seven Shiawassee County commissioners but will no longer lead the board.”

A federal judge in Colorado has sanctioned two lawyers who filed a lawsuit challenging the 2020 election late last year, calling the suit “one enormous conspiracy theory,” and ordering pro-Trump lawyers Gary Fielder and Ernest John Walker to pay the legal fees of all the individuals and companies they had sued as a way to deter future similar cases, the Washington Post reports.

A month before Rudy Giuliani “made Four Seasons Total Landscaping a perfectly odd footnote in U.S. political history, the Trump campaign made a fairly sizable expense to another landscaping company with an almost identical name,” Politico reports.