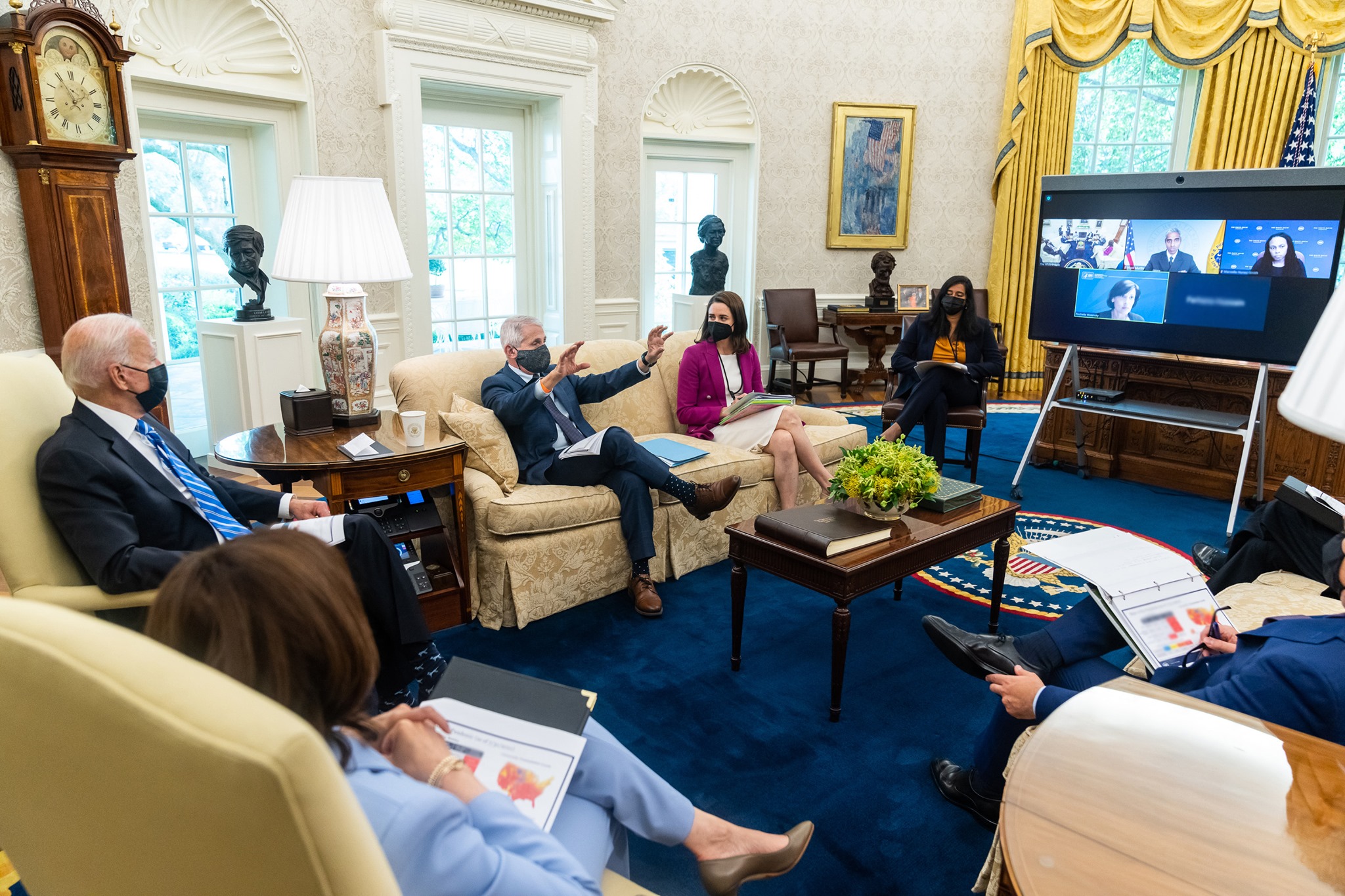 New York Times on New York Governor Andrew Cuomo’s imminent impeachment and removal from office: “A person familiar with the process said it could take just a month to complete the inquiry and draw up the articles of impeachment. A trial in the State Senate could begin as soon as late September or early October.”

Playbook: “New York’s impeachment process looks a lot like Congress’, but with a few differences. It starts in the lower chamber and takes a simple majority of the Assembly’s 150 members to impeach, just like on Capitol Hill. The chamber can create a special committee, though in this case the Judiciary panel has been investigating Cuomo.”

“But unlike with presidential proceedings, Cuomo would be tried in the so-called “High Court of Impeachment,” a jury composed of all the state’s senators (except the majority leader, who would become lieutenant governor and therefore is recused), and the seven members of the state’s highest court. Removal takes two-thirds of the 69-member body.”

Albany Times Union: “We do not expect Mr. Cuomo to resign from office; he is clearly beyond shame. The state Assembly needs to formally vote to proceed with impeachment, an action that would remove the governor from office until the full Legislature and the members of the Court of Appeals can sit in judgment on him. We are encouraged by Assembly Speaker Carl Heastie’s statement that the report’s findings are ‘gut-wrenching,’ but now is the time to display actual guts.”

New York Times: “If Mr. Cuomo cares for the well-being of the state and its citizens as much as he has said he does over the years, he needs to do the right thing and step down.”

New York Post: “It’s time for Gov. Andrew Cuomo to do one honorable thing: step down. If he refuses, lawmakers should remove him. Pronto.”

Josh Dawsey: “Cuomo is unlikely to resign. His people were totally caught off guard by state trooper accusations and were not expecting report to come out yesterday.”

However: “There is little belief among some of longest advisers that he can survive.”

Punchbowl News: “The big question right now… is when does Senate Majority Leader Chuck Schumer file cloture to end the amendment process. Republicans warned Schumer against filing on Tuesday, and he didn’t, but he will have to cut off debate at some point soon.”

“The consensus seems to be that Schumer can get away with filing cloture on Thursday, which would set up a Saturday vote. That would mean a vote on final passage vote early next week.”

Roll Call: “House appropriators set aside $3.7 billion for home-state projects in fiscal 2022 spending bills, with about $2.3 billion, or 62 percent, of the earmarked funds flowing to Democratic districts.”

“Republicans punched slightly above their weight in the final tally, considering the GOP makes up about one-third of members requesting projects in the 10 appropriations bills eligible for earmarks.”

“Most of the top earmarkers by dollar amount are Republicans — despite the fact that not a single GOP member voted for any of the seven bills with earmarks that passed the House as a combined package last week.”

John Cassidy: “The long and the short of all this is that Biden and other Democratic leaders are facing a dual challenge. If they don’t want to rely on Republican votes in the House to pass the infrastructure bill, they will have to somehow pair it with the big reconciliation package. At the same time, maintaining Party unity to pass the reconciliation package must be their overriding priority.”

‘This will involve persuading Sinema; Manchin; Bernie Sanders, the head of the Senate Budget Committee; and A.O.C.—a group with vastly different political priorities—to come together. Equally important will be maintaining the support of some of the less vocal centrist Democrats who are facing tough reelection challenges next year, such as Mark Kelly, Sinema’s colleague in Arizona, and Maggie Hassan, of New Hampshire.”

“For Biden, but also for the country, the stakes are very high.”

“President Biden on Tuesday denounced Republican officials who have blocked efforts to mandate vaccines, as he encouraged cities and states to require that individuals show proof of vaccination to visit restaurants and other public spaces,” the Washington Post reports.

Said Biden: “I say to these governors: Please help. But if you aren’t going to help, at least get out of the way.”

Newsweek: “Arkansas Governor Asa Hutchinson (R) said he regrets signing a bill into law that bans state and local government authorities from implementing mask mandates amid a surge in COVID-19 cases in the state.”

“Hutchinson said now that cases are increasing in Arkansas, he wishes the ban ‘had not become law.’”

Bloomberg: “It isn’t just fear, misinformation or mistrust that’s kept them from getting vaccinated. It’s indifference.”

“A study published in July in the Journal of Adolescent Health found that among unvaccinated young adults, 23% said they felt they could simply go without the shot — mostly because they are not considered a high-risk group. According to the Centers for Disease Control and Prevention, about 54% of people between the ages of 18 and 24 have received one dose or more of the vaccine, the least vaccinated age group among adults.”

“But the face of Covid-19 is changing, with younger people increasingly getting sick and falling more seriously ill.”

“But what we do know is that progressives in Congress feel emboldened in standing up to the White House, and that should help give new shape to the administration’s relationship with the left on Capitol Hill.”

Half of America’s small businesses are likely or certain to require their on-premise employees to be vaccinated, compared to 31% who say that such a mandate is unlikely or that they certainly won’t impose one, according to a Morning Consult poll.

“With a new surge of coronavirus infections ripping through much of the United States, the Food and Drug Administration has accelerated its timetable to fully approve Pfizer-BioNTech’s coronavirus vaccine, aiming to complete the process by the start of next month,” the New York Times reports.

Reuters: “The World Health Organization is calling for a moratorium on COVID-19 vaccine boosters until at least the end of September.”

“The move was to ensure that at least 10% of the population of every country was vaccinated.”

Associated Press: “A San Francisco hospital appears to be the first in the nation to offer people who got the single-shot Johnson & Johnson COVID-19 vaccine a follow-up dose for added protection, likely to help ward off the delta variant.”

Washington Examiner: “The Biden administration supports the repeal of Congress’s 2002 war authorization that led to the Iraq invasion.”

Politico: “The historic, years-long push to rein in executive branch war-making authorities isn’t over yet. But it got this far thanks to tectonic shifts in public opinion as well as growing support among Republicans, who are poised to push the effort over the finish line when it hits the Senate floor later this year.”

“The U.S., Israel and the U.K. all vowed to respond to a deadly drone attack on an Israeli-linked tanker last week in a major waterway for global oil shipments that they blamed on Iran,” Bloomberg reports.

Said Secretary of State Antony Blinken: “There will be a collective response.”

“Blinken gave no details of what that might entail.”

A federal judge on Tuesday blocked an executive order by Texas Gov. Greg Abbott that banned the transportation of migrants within the state by anyone other than law enforcement, saying the department was likely to prevail on arguments that the Texas ban unconstitutionally interfered with the federal government’s operations and conflicted with U.S. immigration law, the Wall Street Journal  reports.

“Faced with a rapidly spreading coronavirus outbreak, China is implementing a wave of travel restrictions and quarantine orders, the scale of which has not been seen since the country’s initial explosion of cases from Wuhan in 2020,” the Washington Post reports.

“Driven by the contagious delta variant, the outbreak will be a closely watched test of China’s vaccines as well as its draconian containment strategy, which until this point has been largely effective in keeping infections low.”

“Treasury Secretary Janet Yellen on Monday revealed further measures to avoid breaching the federal government’s borrowing limit and urged Congress to increase or suspend the ceiling, which went back into effect on Sunday,” the Wall Street Journal reports.

“Former President Donald Trump said this week that he will not move to stop former Justice Department officials from testifying before two committees that are investigating the Trump administration’s efforts to subvert the results of the presidential election,” the New York Times reports.

“By allowing his former Justice Department officials to speak with investigators, Mr. Trump has paved the way for new details to emerge about his efforts to delegitimize the outcome of the election.”

Associated Press: “The Taliban pressed ahead with their advances in southern Afghanistan on Tuesday, capturing nine out of 10 districts of the Helmand provincial capital, residents and officials said. Afghan government forces launched airstrikes, backed by the U.S., in a desperate effort to defend the city of Lashkar Gah.”

“The fall of Lashkar Gah would be a major turning point in the offensive the Taliban have waged over the past months as U.S. and NATO forces complete their pullout from the war-torn country. It would also be the first provincial capital captured by the Taliban in years.”

Mark McCloskey and Patricia McCloskey pleaded guilty in June to misdemeanor charges, and each were to pay fines without facing jail time. The governor has made repeated statements saying he would pardon the couple.