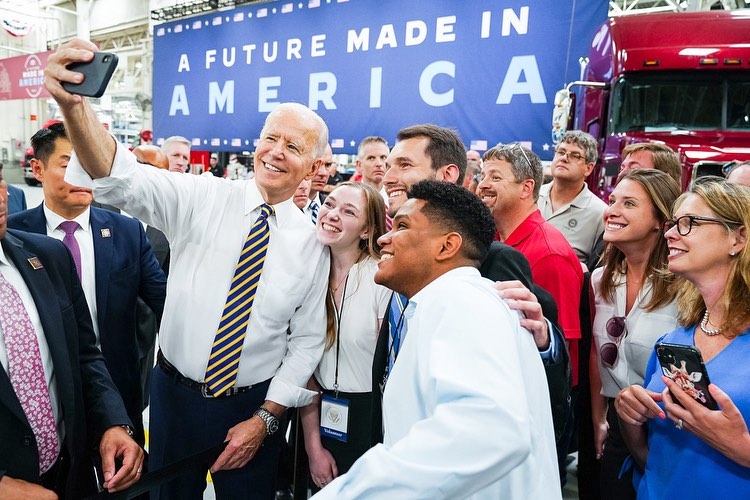 “Brown, whose victory was projected by The Associated Press, defeated Nina Turner, a former state senator known nationally for her work on Sen. Bernie Sanders’ presidential campaigns.” The result was 51% to 44%.

“I am going to work hard to ensure that something like this doesn’t happen to another progressive candidate again. We didn’t lose this race, evil money manipulated and maligned this election.”  — Nina Turner (D), in her concession speech after losing to Shontel Brown (D) in a House special election primary.  No, Nina, you lost this race because you attacked Hillary Clinton and Joe Biden and you proudly said you didn’t vote for either against Donald Trump.   Attention Progressives: don’t do that if you want to win a Democratic primary.  Democratic voters do not understand not voting for the Democrat against Donald Trump, and they tend to like Joe Biden very much.

“A Democratic candidate backed by the party establishment and a Republican endorsed by former President Donald J. Trump won two primary races for open House seats in Ohio on Tuesday, an assertion of dominance for the leadership of both political parties as they face questions over unity in their ranks,” the New York Times reports.

“In a Democratic primary in northern Ohio, Shontel Brown, who vowed to be ‘a partner’ with the Biden administration and Speaker Nancy Pelosi, prevailed over Nina Turner, a party outsider who openly rejected the idea that Democrats are more effective through conciliation and compromise.”

“And in a Republican primary near Columbus, Mike Carey, a newcomer to elected office who was largely unknown before being endorsed by Mr. Trump, easily beat out 11 rivals, many of them with much longer records in Ohio politics.”

Morning Consult: “President Joe Biden’s standing among independent voters on the pandemic and the economy has taken a hit in recent weeks.”

“44 percent of independent voters approve of Biden and 49 percent disapprove.”

“Since April, the president’s net approval rating (the share who approve minus the share who disapprove) has dropped 18 percentage points among unaffiliated voters.”

A new Quinnipiac poll finds President Biden with a mixed job approval rating, with 46% of Americans approving and 43% disapproving.  This compares to a positive 49% to 41% job approval in May.

Meanwhile, CDA finds conservative radio host Larry Elder leading his fellow Republican, 2018 nominee John Cox, 10-4 in the race to succeed Newsom if he’s ejected, with a 32% plurality marking themselves as undecided and another 22% of respondents opting for “None of These.” CDA, which conducted a few polls earlier this year for New York City’s Democratic primary, said it is “independent and not affiliated with any client, candidate campaign, nor any independent expenditure effort for or against the recall.”

“At least one Arizona state senator wants to jail the Republican-majority board of supervisors in Maricopa County after the county rejected new subpoenas from the Senate for election materials,” TPM reports.  Said state Sen. Wendy Rogers (R): “I would have arrested all of these people already if I had the power to do so. I vote to arrest. Arrest and put them in solitary.”

In another match up, DeSantis leads Agricultural Commissioner Nikki Fried, 45% to 42%.

Florida Politics: “That’s a big step up for Crist who, in previous polls, was trailing DeSantis by as much as double digits.”

Marist College released the first poll conducted since the release of the Attorney General’s report in New York regarding the investigation into sexual harassment allegations made against New York Governor Andrew Cuomo, and it found that 59 percent of New Yorkers wanted Cuomo to resign — and if he doesn’t resign, the same share thinks the state legislature should impeach him.

“During a closed-door lunch last week with some of his most vulnerable incumbents, House Democrats’ campaign chief delivered a blunt warning: If the midterms were held now, they would lose the majority,” Politico reports.

“Rep. Sean Patrick Maloney (D-NY) followed that bleak forecast, which was confirmed by multiple people familiar with the conversation, with new polling that showed Democrats falling behind Republicans by a half-dozen points on a generic ballot in battleground districts. Maloney advised the party to course-correct ahead of 2022 by doing more to promote President Joe Biden’s agenda, which remains popular with swing voters.”

A new Axios/Ipsos poll finds that 79% of vaccinated respondents blame the unvaccinated for the rising cases of Covid-19. In addition, 36% also point to former President Trump, while 33% blame conservative media and 30% say people from other countries traveling to the United States are responsible.

Among the unvaccinated respondents, 37% blame people traveling to other countries for rising infection rates in the U.S, 27% point the mainstream media and 21% say it is President Biden’s fault.

A new Marquette University poll finds that those surveyed oppose expanding the number of Supreme Court justices 51% to 48%.

VIRGINIA GOVERNOR — Bloomberg: “After Carlyle’s founders gave him a shot at co-running the firm in 2018, he flamed out. In an industry where leadership teams work together for decades, his co-CEO quickly established dominance, diminishing Youngkin’s clout.”

As Youngkin told Fox News host Tucker Carlson in May: “You know Tucker, this is why I quit my job last summer. I actually could not recognize my home state of Virginia.”

“But at Carlyle the circumstances of his exit aren’t really a secret: He retired after a power struggle that left him in charge of more modest businesses. Current and former employees, asking not to be identified discussing internal business, describe a checkered record at odds with his campaign’s portrayal.”

“I’m not even sure what Glenn’s agenda is… but politics is a dirty business, and you’re dealing with a lot of irrational voters.” — A former colleague of Virginia gubernatorial candidate Glenn Youngkin (R), quoted by the Washington Post.

LOS ANGELES MAYOR — Rep. Karen Bass (D-CA), one of the most prominent Black women in Congress and an ally of President Biden, has signaled she is open to running for mayor of Los Angeles in 2022 under encouragement from some Democrats, the Washington Post reports.

More than a year after George Floyd’s murder by a white police officer prompted debate over police reform and whether to slash law enforcement funding, a half-dozen police chiefs and high-ranking law enforcement officers have moved to run for higher office, the Associated Press reports.

Tom Nichols: “The ’60s, ’70s, and ’80s are remembered now with sepia-toned nostalgia, but mostly by people who could not possibly remember any of it at all.”

“Younger Americans hear tales from aging relatives of affordable homes and safe streets in Los Angeles, or of guaranteed union jobs waiting in Youngstown or Gary, but these are now like legends passed down through the generations. Not many Americans want to think very much about what it would actually mean in social or economic terms to go back and live in those Kodachrome moments in their minds.”

“And yet this reality never seems to matter in political debates. Whether economic times are good or bad, this lament for the old days of factories and mills—jobs that were long gone before some voters were old enough to cast a ballot or were even born—never changes.”

“The 67-year-old’s return to politics marks the sixth time in the past seven election cycles that the Republican has run for high office in Maine.”

“Six months since leaving office, former President Donald Trump is sitting on a $102 million war chest,” Politico reports.  “But having whipped his supporters into a frenzy with pledges to overturn the election and promises to support Republican candidates in the midterms, he is not spending his campaign money on either.”

OHIO GOVERNOR — Rep. Warren Davidson on Friday reiterated his interest in challenging Gov. Mike DeWine in next year’s Republican primary for the first time in months, and the congressman added that he hoped to decide in September. Davidson, who won the 2016 special election to succeed ex-Speaker John Boehner in the House, has been a dependable ally of the far-right, though he hasn’t generated nearly as much attention as many of his compatriots over the ensuing five years.

Still, Davidson does have at least one powerful friend: A spokesperson for Rep. Jim Jordan, who represents a neighboring Ohio seat, said, “If Mr. Davidson ran for governor, I think Mr. Jordan would definitely support him.” If Davidson does run, he’d start out at a big financial disadvantage against DeWine, who raised $3 million in the first half of 2021 and ended June with $6.5 million on-hand. The governor does currently face an intra-party challenge from one of Davidson’s former House colleagues, 2018 Senate nominee Jim Renacci, but as we previously noted, Renacci took in just $22,000 from donors. (He also self-funded $1 million, but it’s far from guaranteed he’ll actually put it to use.) That’s even well behind the $260,000 brought in by cattle rancher Joe Blystone, whom we hadn’t previously mentioned.

On the Democratic side, Dayton Mayor Nan Whaley outpaced Cincinnati Mayor John Cranley $1.6 million to $1.1 million during the first six months of 2021, and she ended with a small $1.4 million to $1.3 million cash-on-hand edge.