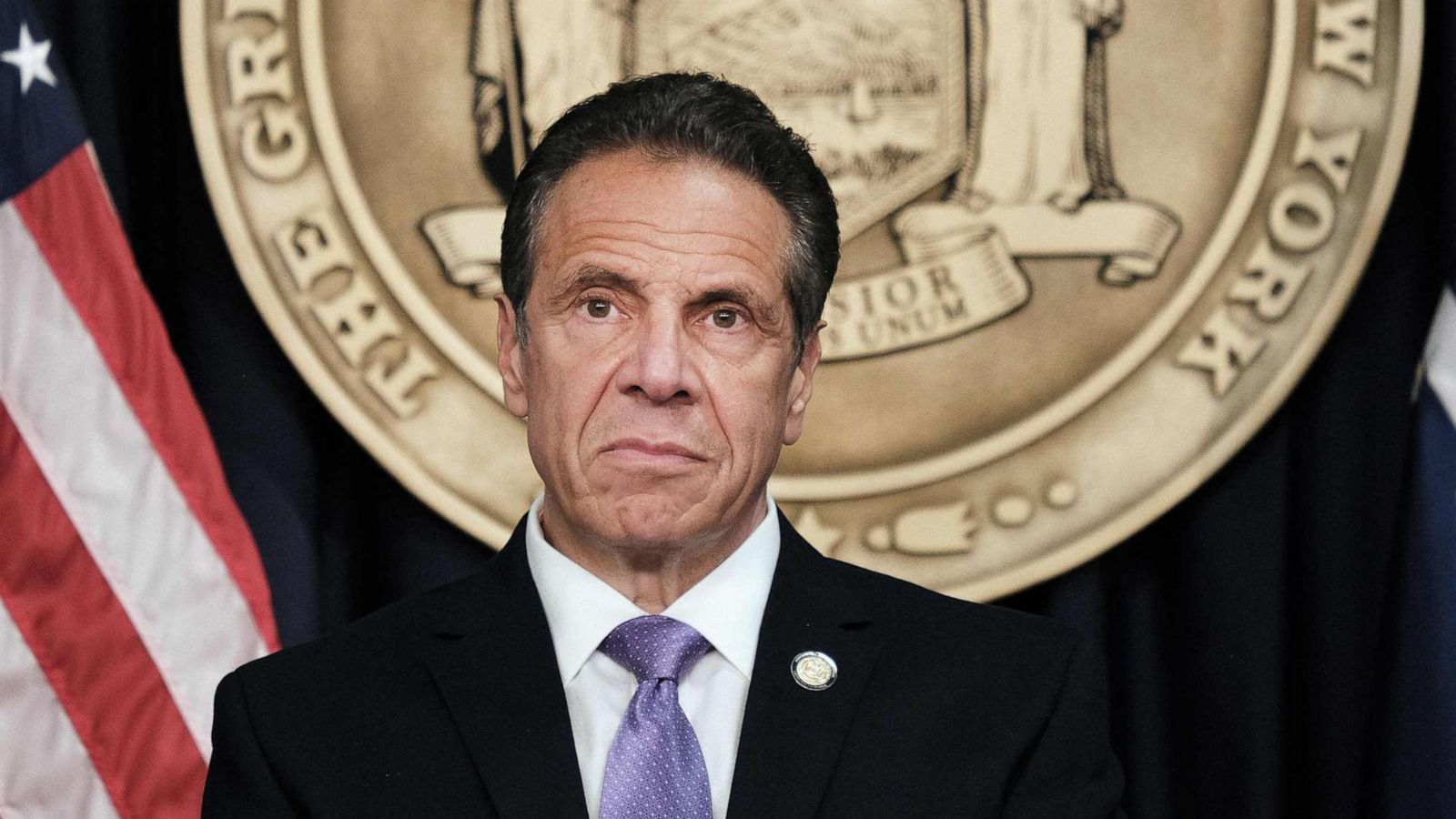 New York Gov. Andrew Cuomo (D) “sexually harassed multiple women, including current and former government workers, and retaliated against at least one of the women for making her complaints public, according to a much anticipated report from the New York State attorney general released on Tuesday,” the New York Times reports.

“The 165-page report said that Mr. Cuomo, a third-term Democrat, and his aides cultivated a toxic work environment in his office that was rife with fear and intimidation, and helped enable ‘harassment to occur and created a hostile work environment.’”

“The findings of the report could fuel support for impeachment proceedings against Mr. Cuomo in the State Legislature, which Democrats overwhelmingly control, lead to additional calls for his resignation and influence public opinion as he considers running for a fourth term.”

The report is unambiguous and clearly states that Cuomo violated laws.

From their joint statement: “The people of New York deserve better leadership in the governor’s office. We continue to believe that the Governor should resign.”

As dozens of elected officials called for his resignation, New York Gov. Andrew Cuomo (D) denied the sexual harassment allegations against him, which were corroborated in a probe led by the state attorney general.

Said Cuomo: “I never touch anyone inappropriately or made inappropriate sexual advances. I am 63 years old. I live my entire adult life in public view. That’s just not who I am.”

“There should be a zero tolerance policy when it comes to sexual harassment and must send a clear message that this behavior is not tolerated.” — New York Gov. Andrew Cuomo (D), in a tweet from 2013.

“The speaker of the New York State Assembly said on Tuesday that Gov. Andrew M. Cuomo had lost the support of the Democratic majority in the assembly and could no longer serve as governor,” the New York Times reports.

“The statement from Speaker Carl Heastie, came after an emergency meeting with fellow Democratic members on Tuesday to discuss how the body — which has the sole power to impeach Gov. Andrew Cuomo — should address the attorney general’s findings that Mr. Cuomo had sexually harassed multiple women, most of them state employees.”

Cuomo wants to stay. Every sentient being alive on Earth wants him gone. He will likely be impeached.

“The policy is similar to mandates issued in France and Italy last month and is believed to be the first of its kind in the United States.”

McClatchy: “Republican leaders are stressing they want a robust amendment process for the 2,700 page bill that isn’t rushed.”

Said McConnell: “Our full consideration of this bill must not be choked off by any artificial timetable that our Democratic colleagues may have penciled out for political purposes.”

“But Senate Majority Leader Chuck Schumer would like a final vote on the sweeping bill to take place this week and is urging a faster process.”

Politico: “With the upper chamber closing in on President Joe Biden’s long-sought, $550 billion bipartisan infrastructure plan and readying a budget to set up a companion $3.5 trillion domestic spending plan, the majority leader is letting the simple threat of his members missing state fairs and overseas delegations drive the result. August in Washington isn’t any senator’s idea of a good time.”

“So while the Senate is scheduled to leave town later this week, Schumer is set to blow through the previously scheduled start to recess, and beyond. He’s betting it won’t take long for senators to get so tired, and miss enough events back home, to dramatically speed up the Senate’s endgame on the infrastructure bill it’s currently considering — not to mention a budget set to follow it that would end with an all-night vote-a-rama.”

“A Florida school district has dropped its mask mandate for schools after Gov. Ron DeSantis (R) issued an executive order that would cut off funding to schools that did so,” The Hill reports.

Peter Feaman, a top RNC official in Florida, has spread anti-vaccine rhetoric and misinformation, comparing the Biden administration’s vaccine efforts to Nazi-era “brown shirts,” and twice calling the vaccines “the mark of the beast,” a reference to a symbol from the biblical Book of Revelations showing allegiance to Satan, CNN reports.

An important video: Dr. Catherine O’Neal describes the dire situation in Louisiana at the state’s largest hospital in Baton Rouge.

Said Edwards: “It has been clear that current recommendations on their own haven’t worked.”

Associated Press: “The Biden administration will announce a new 60-day eviction moratorium that would protect areas where 90% of the U.S. population lives.”

“The Centers for Disease Control and Prevention has identified a legal authority for a new and different moratorium that would be for areas with high and substantial increases in COVID-19 infections.”

New York Times: “On Monday, administration officials made it clear they could only do so much, blaming states for the fact that the $47 billion Emergency Rental Assistance program intended to avoid such a crisis has disbursed only $3 billion — or just 7 percent of the total.”

“But many Democrats, including Speaker Nancy Pelosi, have called on Mr. Biden to reconsider his decision not to act unilaterally, and have expressed anger at the White House for giving them only two days to ram through legislation to extend the freeze.”

New York Times: “A Republican-linked group said on Monday that it was beginning a recall campaign backed by undisclosed donors to brand Democrats and their allies as soft on crime by targeting progressive prosecutors.”

“The initial focus is three prosecutors who were elected in the affluent Northern Virginia suburbs of Washington in 2019 amid a national wave of pledges by Democrats to make law enforcement fairer and more humane.”

Jonathan Bernstein: “On Tuesday, the U.S. finally reached President Joe Biden’s goal of having at least 70% of adults receive their first vaccination shot — except that Biden back in May had set the goal for July 4, and Tuesday was the second day of August.”

“That seems like a clear loss for Biden. But it turned out that setting and failing to hit the goal did no noticeable damage to the president. Yes, plenty of reporters noticed it and there were some stories about it on July 4. Hitting 70%, moreover, was a news story framed by the fact that it was a month later than Biden had wanted.”

“Yet there’s been little blame cast on the administration for falling short.”

New York Times: “The crisis Biden once thought he had under control is changing shape faster than the country can adapt. An evolving virus, new scientific discoveries, deep ideological divides and 18 months of ever-changing pandemic messaging have left Americans skeptical of public health advice. So although the White House had promised a ‘summer of joy,’ the nation is instead caught in a summer of confusion.”

“President Joe Biden has a tough decision in choosing the next Federal Reserve chair: Play it safe by giving Jerome Powell a second term or take a chance on a liberal like Lael Brainard, who would please progressives in Congress yet potentially agitate Wall Street,” Bloomberg reports.

“Either path offers speed bumps for the White House. Powell would likely sail to Senate confirmation, giving the Biden administration a significant bipartisan win. Financial markets would likely remain calm, but Biden would likely disappoint some progressive Democrats he needs for other issues.”

“A liberal nominee, like Fed Governor Brainard, who hews more closely to Biden’s economic agenda and is far more of a hawk on banking regulations, would likely keep Democratic senators like Elizabeth Warren and Banking Chair Sherrod Brown happy. Yet it would presage a bruising confirmation fight, potentially even a 50-50 vote with Vice President Kamala Harris the tie-breaker.”

Axios: “The U.S. has shipped and donated more than 110 million coronavirus vaccine doses to over 60 countries.”

“It is more than the combined donations of all other countries.”

“A Washington, D.C., police officer has died from suicide, making him the third cop to kill himself after defending the U.S. Capitol during the Jan. 6 riot by Trump supporters,” CNBC reports.

A fourth police officer who responded to the U.S. Capitol on January 6 died of suicide last month, WUSA reports.

Associated Press: “The number of children traveling alone who were picked up at the Mexican border by U.S. immigration authorities likely hit an all-time high in July, and the number of people who came in families likely reached its second-highest total on record.”

“The sharp increases from June were striking because crossings usually slow during stifling — and sometimes fatal — summer heat.”

“A National Labor Relations Board official on Monday recommended that the union vote at Amazon’s fulfillment center in Bessemer should be redone, finding that Amazon’s anti-union tactics improperly interfered with workers’ rights to vote,” the Alabama Political Reporter reports.

“Amazon workers voted 1,798 to 738 against unionizing, but the union appealed the results, alleging Amazon used numerous anti-union tactics, which the company has denied.”

“Conservatives need to do our part, and the Biden administration must find voices that will be trusted in conservative communities to explain the data and integrity of the vaccine programs. They would also do well to continue to acknowledge the historic achievement of the Trump administration in expediting these vaccines. I’m not naïve about the partisan issues and the mistrust between parties at play — but a measure of political graciousness could go a long way to depoliticize the issue.”

“In seeking to end this pandemic, the Biden administration is exhorting all unvaccinated adults in our country to get their shots, and I fully support it in this call. It would be tragic to see more lives needlessly lost when we are so close to beating this virus once and for all.”

New York Times: “The Biden administration responded to frantic pleas from small businesses in the spring. It did not renew a pandemic-related suspension of the J-1 program, which provides short-term visas designed for foreign students who come to the United States to work and travel.”

“Soon after, it raised the quota on temporary visas under the H-2B program for temporary nonagricultural workers, which are issued through a lottery. But travel restrictions, backlogs and delays at foreign consulates in approving applicants have still left businesses from Maine to California in the lurch.”

Sen. Ron Johnson (R-WI) suggested at a political event that the FBI knew of the January 6 riots at the U.S. Capitol in advance, the Washington Post reports.

“Former President Donald Trump will fight any move by the Treasury Department to turn over his tax returns to Congress, a lawyer for Mr. Trump said Monday, days after the Justice Department directed the agency to provide the documents to a House panel,” the Wall Street Journal reports.

“A plan to protect the confidentiality of Americans’ responses to the 2020 census by injecting small, calculated distortions into the results is raising concerns that it will erode their usability for research and distribution of state and federal funds,” the Wall Street Journal reports.

“The Census Bureau is due to release the first major results of the decennial count in mid-August… The bureau will adjust most of those statistics to prevent someone from recombining them in a way that would disclose information about an individual respondent. Testing by the bureau shows that improvements in data science, computing power and commercial databases make that feasible.”