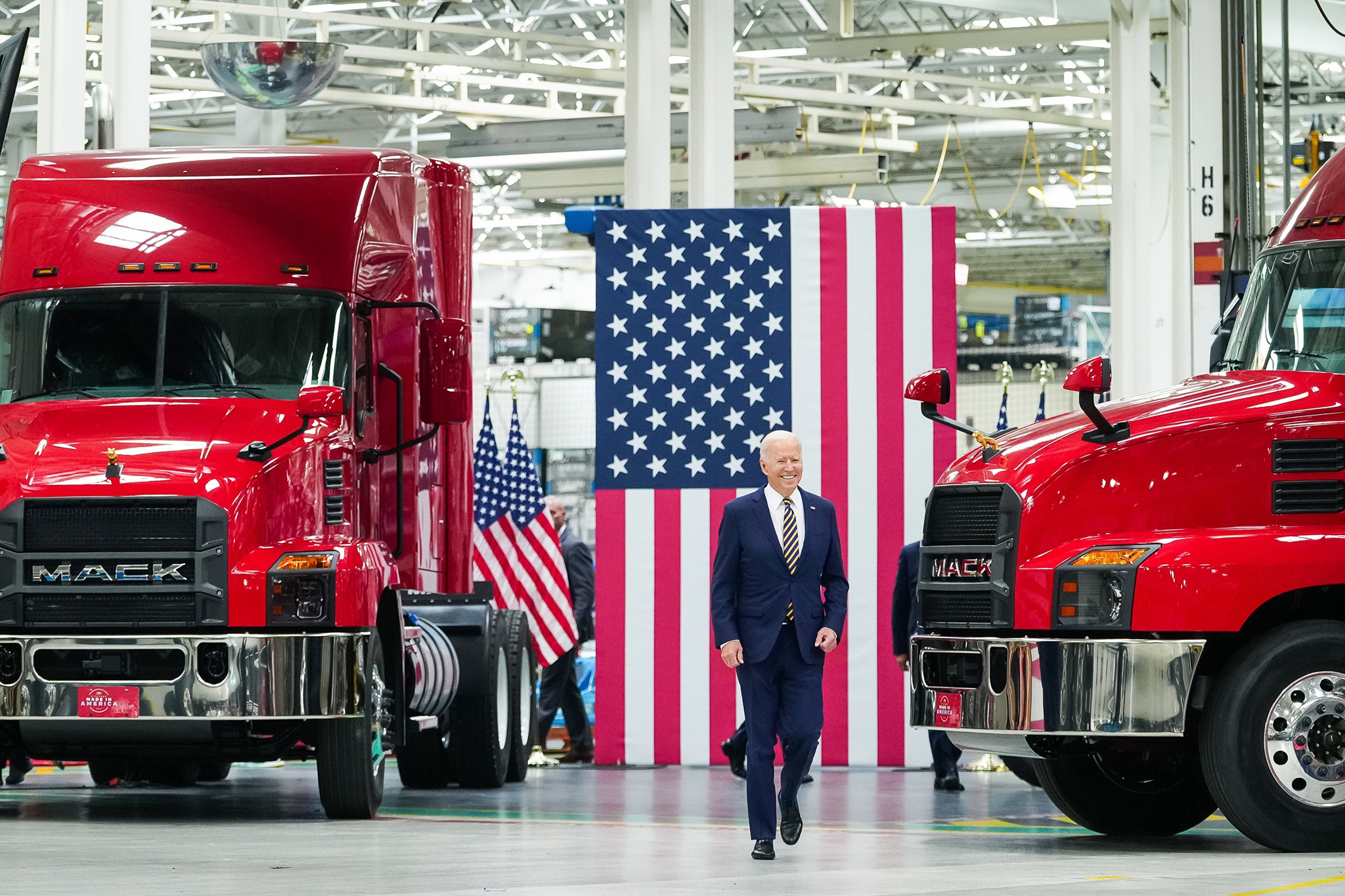 Playbook on the two special primary elections tonight in Ohio: “First, the Democrats in the 11th District: Nina Turner began the race to replace now-HUD Secretary Marcia Fudge with a big lead, but Shontel Brown, a local establishment figure, is closing strong. The race boils down to two members of the party’s most loyal demographic, Black women, who offer competing versions of what it means to represent a majority-minority, solid-blue Democratic district: Turner’s combative, pro-Bernie drive to the left, or Brown’s more conventional, work-with-Biden approach.”

“Farther south, Republicans are choosing a new member in the 15th District. Trump made his pick months ago: Mike Carey, a coal lobbyist who’s never run before. But a week after the Trump-endorsed Susan Wright went down in a Republican-vs.-Republican runoff in Texas, the former president’s sway within the GOP is firmly on the line. There are 10 other candidates, including three sitting state lawmakers (one of whom, state Rep. Jeff Lare, is backed by the former incumbent, Steve Stivers).”

“Polls close at 7:30 p.m. Since these are primaries, the winners won’t take office until after the special elections in November. But questions about where the two parties are headed — Democrats’ driving force under Biden, and Trump’s power over the GOP — will be answered tonight.”

OHIO GOVERNOR — Former Rep. Jim Renacci unveiled the opening fundraising haul on Friday for his Republican primary bid against Gov. Mike DeWine, and his numbers were not good. Renacci, who launched his campaign on June 9, reported raising a mere $22,000 from donors through the rest of the month.

The former congressman self-funded another $1 million and had about that much on hand, but there’s reason to be skeptical he’ll put it to use. In 2018, when Renacci campaigned against Sen. Sherrod Brown, he loaned his campaign a hefty $4 million, but his fellow Republicans became pissed when they learned how little of it he was actually spending. The then-congressman ended up losing the general 53-47 even as DeWine prevailed 50-47, and his vanquished candidate soon repaid $3.5 million of that loan to Renacci.

It remains to be seen whether a stronger Republican will step up to take on DeWine, who infuriated the far-right early in the pandemic by promoting public health measures, and later alienated Donald Trump when he recognized Joe Biden’s victory. One person who did express interest in a primary bid back in late February is Rep. Warren Davidson, who trashed the governor for his “overbearing” approach to fighting the pandemic.

Davidson doesn’t appear to have said anything new over the last five months, but speculation about his plans has not ended. On Thursday, one day before Renacci publicized his abysmal fundraising numbers, NBC’s Henry Gomez tweeted, “Some Ohio Republicans, even with Renacci already primarying DeWine, have been wondering in recent days if Davidson might still jump” into the race.

“Unless the dynamics of the race change dramatically, new campaign numbers on Friday suggest that Gov. Mike DeWine, despite passionate opposition from a segment within his own party, is on a comfortable path to secure the Republican nomination next year and given the state’s larger political trends, perhaps even re-election,” the Cleveland Plain Dealer reports.

“DeWine reported raising more than $3 million in the most recent period.”

MINNESOTA GOVERNOR — State Senate Majority Leader Paul Gazelka has been considering joining the GOP primary for governor for a while, and he’ll now reportedly make a decision by late August, around the time of the state fair. Gazelka had previously said he’d make his choice around the end of Minnesota’s legislative session in May, but gave conflicting signals in July when he said he’d decide “in 40 days” as of July 6, which he later moved to a more cryptic timetable of “weeks to months.”

His shifting timeline on a decision may be related to his desire to run, as the Minnesota Reformer relays that he may end up sitting this contest out, partially due to his tenuous support among the GOP base. The Reformer also reports that state Sen. Michelle Benson, another potential Republican candidate considering a bid, is eyeing a mid-August campaign kickoff. Benson did not dispute the report, simply responding “stay tuned.”

ALASKA U.S. SENATOR — Right Wing Watch posted video over the weekend of former reality TV star Sarah Palin publicly expressing interest in challenging her fellow Republican, Sen. Lisa Murkowski, declaring, “If God wants me to do it I will.” Palin made her comments to New Apostolic Reformation leader Ché Ahn, a pastor who addressed a pro-Trump rally just ahead of the Jan. 6 attack on the Capitol and proclaimed, “I believe that this week we’re going to throw Jezebel out and Jehu’s gonna rise up, and we’re gonna rule and reign through President Trump and under the lordship of Jesus Christ.”

Palin, who rapped “Baby Got Back” dressed as a bear in a 2020 episode of The Masked Singer, also threw in a dig at Trump’s endorsed candidate, former state cabinet official Kelly Tshibaka. However, Palin’s claim that she’s “never heard” of Tshibaka may say far more about the would-be daytime TV judge than it does about her would-be opponent in next year’s top-four primary. Palin famously and abruptly resigned as governor of Alaska in 2009, and she’s had little involvement with state politics since then.

We’re not the only ones who seem to be in disbelief that 12 whole years has passed since Palin left office, though, as she seems to still be fixated on those bygone days when she was one of the most powerful names in Republican politics. “I would say you guys better be there for me this time, because a lot of people were not there for me last time,” Palin told her audience in reference to her 2008 vice presidential bid.

Palin continued her trip down memory lane by arguing that, after her defeat, Democrats tried to bury her with unwarranted lawsuits. She insisted, “[T]he Obama administration, man, they sent their flying monkeys, they did. You call people flying monkeys if they’re the ones doing the bidding of someone else to try and clobber you.” She went on to defend her decision to leave the governorship the next year, insisting, “There’s a difference between quitting and saying enough is enough.

ARIZONA 6TH CD — Insurance executive Elijah Norton has announced that he will challenge Rep. David Schweikert, whom he said was only in Congress to “serve himself,” in next year’s Republican primary.

Norton kicked off his bid by attacking the ethics of the incumbent, ​​who last year agreed to pay a $50,000 fine, accept a formal reprimand, and admit to 11 different violations of congressional rules and campaign finance laws in a deal with the bipartisan House Ethics Committee to conclude its two-year-long investigation. “First and foremost, he wasted taxpayer dollars and that was part of the report,” said the challenger, adding, “I think it’s interesting that a ‘math geek’ lied on (a Federal Elections Commission) report.”

This isn’t the first time Schweikert has been attacked over this matter, but it was far from enough to sink him in 2020. Last year the congressman faced a serious Democratic challenge from Democrat Hiral Tipirneni, who worked hard to portray him as untrustworthy. However, while Schweikert’s 52-48 victory marked the closest general election of his career, he still matched Donald Trump’s 51-47 showing in this seat, which includes Scottsdale and North Phoenix.

Norton himself may also be vulnerable when it comes to ethics. The Arizona Republic’s Ronald Hansen wrote back in May that he left as president of the company CarGuard Administration in 2020 “ahead of a class-action lawsuit filed against the company and others claiming it had made numerous calls to phone numbers on the National Do Not Call Registry.” Schweikert’s campaign already went after Norton’s departure from CarGuard that month, which brought a furious response from the company’s current leadership.

Schweikert hauled in $165,000 during the second quarter of 2021 and ended June with $245,000 on-hand, which isn’t an especially intimidating number for an incumbent. However, while Hansen describes Norton as wealthy, it remains to be seen if has the connections and personal resources to run a serious campaign.

Redistricting is particularly unpredictable in Arizona, so it’s also far from certain if the new version of this seat will be a viable target for Team Blue next year. The only notable Democrat who has announced so far is Jevin Hodge, who lost a tight race last year for the Maricopa County Board of Supervisors: Hodge took in $125,000 during his opening quarter, and he had $65,000 on-hand on June 30.

TEXAS GOVERNOR — “I’d be very surprised if he doesn’t run.”  — Rep. Jared Huffman (D-CA), who lived with former Rep. Beto O’Rourke (D-TX) in Washington, D.C. and keeps in touch with him, talking to the Daily Beast about the Texan’s potential gubernatorial bid.

VIRGINIA GOVERNOR — Virginia gubernatorial candidate Glenn Youngkin (R) was caught on audio telling a supporter that it’s “unclear” whether Donald Trump will be reinstated by the courts as president.

Axios: “While the Democratic Party is increasingly represented by candidates and elected officials who look more like the places they serve, some are looking to mayoral races in big blue cities like Boston and New York to determine whether the party is looking not just at race but also political philosophy.”

“Several strategists who focus on national mayoral races said that when selecting a mayor, voters typically are looking for a candidate who represents stability, not someone to shake things up.”

IOWA U.S. SENATOR — Democratic Rep. Cindy Axne took her name out of contention on Monday when she announced that she was endorsing former Rep. Abby Finkenauer’s campaign against Republican incumbent Chuck Grassley. Axne’s decision almost certainly ensures that Finkenauer will remain the heavy favorite to win the primary ahead of what will be a very tough general election, though it’s still possible other Democrats will run.

Axne has also been considering running against Republican Gov. Kim Reynolds for months, and she did not say anything new about that campaign on Monday.

FLORIDA 15TH CD — Former Democratic state Rep. Adam Hattersley said last week that he was considering another bid for the House but wanted to see how redistricting would impact the 15th District. Hattersley campaigned for the current version of this seat, which includes Lakeland and the exurbs of Tampa and Orlando, in 2020, but he struggled to raise money and lost the primary 41-33 to former TV anchor Alan Cohn. Hattersley subsequently did not endorse Cohn in the general election, a campaign the Democrat lost 55-45 to Republican Scott Franklin.

FLORIDA 20TH CD — Progressive pollster Data For Progress conducted an early July survey of the November Democratic primary that found Dale Holness edging out fellow Broward County Commissioner Barbara Sharief 17-14. The only other contender who took double digits in the crowded field for this safely blue seat was state Rep. Omari Hardy, who was in third with 10%.