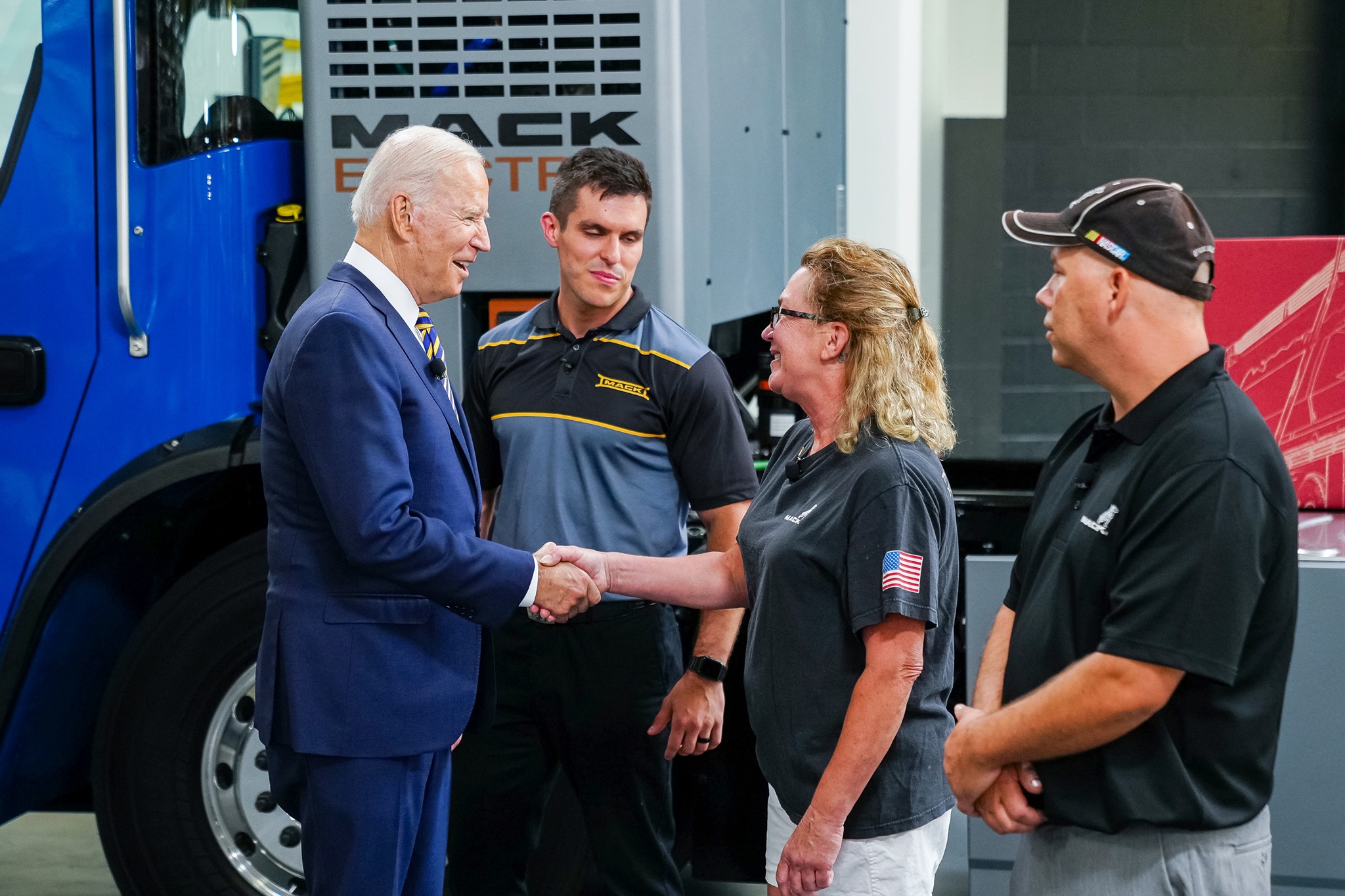 “An array of progressive and pro-White House groups plans to spend nearly $100 million to promote President Joe Biden’s agenda over the next month to pressure Congress while lawmakers are on their August recess,” the Associated Press reports.

“The push being announced Monday, coupled with a wave of travel by the president’s top surrogates, is meant to promote and secure passage of Biden’s two-track infrastructure plan: a bipartisan package focused on highways, transit and broadband, and a Democrats-only budget reconciliation bill for child care and what the White House calls human infrastructure.”

“The goal, officials said, was to bombard the home districts of members of Congress with ads — both televised and digital — to keep the pressure on to follow through on their votes as well as to underscore much of the agenda’s popularity with the public.”

This is a huge bet by Democrats on selling their agenda.

Jane Meyer: “Arizona is hardly the only place where attacks on the electoral process are under way: a well-funded national movement has been exploiting Trump’s claims of fraud in order to promote alterations to the way that ballots are cast and counted in forty-nine states, eighteen of which have passed new voting laws in the past six months. Republican-dominated legislatures have also stripped secretaries of state and other independent election officials of their power.”

Said election law expert Rick Hasen: “I’m scared shitless. It’s not just about voter suppression. What I’m really worried about is election subversion. Election officials are being put in place who will mess with the count.”

Gallup: “In a dramatic shift from last month, more Americans now say the coronavirus situation in the U.S. is getting worse (45%) rather than better (40%). In June, a record 89% said the situation was getting better, while only 3% said it was getting worse.”

CALIFORNIA GOVERNOR — First Read: “Newsom & Co. have spent $5.9 million in advertising from July 1 to Aug. 2, while Republicans and recall backers have spent just $27,500 during that same time period.”

“Now we expect those GOP ad numbers to increase over the next six weeks. Still, that’s quite a financial disadvantage in this very expensive state.”

The Republican firm Medium Buying reported Friday that Democratic Gov. Gavin Newsom has booked a total of $12.3 million in TV and radio time from Aug. 2 through the Sept. 14 recall, which is an increase from the $8.6 million reservation we heard a few days before.

Texas Tribune: “Susan Wright’s campaign had reasons to feel good Tuesday morning, coming off a tele-rally with former President Donald Trump the night before and armed with internal polling showing she had a comfortable lead over her fellow Republican opponent. But anxiety set in as the day went on and her campaign saw higher-than-expected turnout. Then, a couple hours before polls closed, her consultant, Matt Langston, got a call.”

“It was from a campaign worker at a polling place, and they said the kinds of voters who were showing up had ‘definitely changed.’ How do you know that? Langston asked.”

Said the worker: “Because they’re all wearing masks.”

Ross Douthat: “The weakness Trump showed this week is real, but it isn’t new. His power over the GOP has always been limited: As president he often found himself balked on policy by congressional Republicans, and his impressive endorsement record reflects a lot of cautious winner-picking, not aggressive movement-building.”

“Limits on his power, however, are not the same things as limits on his support. The rule in the Trump era is that you can oppose Trump indirectly or win without his endorsement — but save for a few unusual cases, you can’t challenge him personally and expect to have Republican voters on your side. In areas that involve the details of policy or the machinery of governance, Trump can be defeated. In any referendum on the question ‘Should Donald Trump be our leader in the battle against liberalism?’ his winning record is unmatched.”

WISCONSIN U.S. SENATOR — “Wisconsin Republicans are waiting anxiously for Sen. Ron Johnson (R-WI) to make a decision on whether he will run for reelection and are quietly considering backup plans in case he doesn’t run,” The Hill reports.

“Former President Donald Trump has $102 million in political cash that he can wield as the GOP eyes retaking majorities in Congress next year,” the Wall Street Journal reports.

“The fundraising figures show that even after losing the 2020 election and being banned from multiple social-media platforms, Mr. Trump remains a draw for donations from Republican voters, particularly through email and text message solicitations.”

ALASKA U.S. SENATOR — Former Alaska Gov. Sarah Palin (R) said she may yet jump back into politics, teasing the possibility of a Senate run in 2022 against incumbent Lisa Murkowski, the New York Post reports.

Jonathan Bernstein: “It’s something that I see pretty often in reader emails and on Twitter, mostly from Republicans but in some cases from liberal Democrats. There’s no surprise here; the vice presidency makes everyone look bad, and the idea that the first Black and Asian-American woman to hold this office is not up to the job is consistent with certain stereotypes.”

“It’s also preposterous. Yes, once nominated almost anyone can win a general election, and perhaps every once in a while a nomination is just luck — in fact, I’ve argued that Donald Trump’s first nomination was largely a fluke. But Harris managed to work her way up in local and state politics in California, without money or family connections on her side, winning multiple nominations. That’s the mark of a good politician. So, for that matter, is securing the vice-presidential nod.”

OHIO 11TH CD — “A House special election primary in Cleveland tomorrow is shaping up as a proxy war over the direction of the Democratic Party, with the top two candidates drawing millions in donations as prominent figures including Sen. Bernie Sanders and Rep. James Clyburn line up on opposing sides,” the Wall Street Journal reports.

OHIO 15TH CD — “Former President Donald Trump’s power as Republican kingmaker will face another test on Tuesday as a large cast of candidates vie to be the party’s choice for an open congressional seat in Ohio,” Bloomberg reports.

SOUTH CAROLINA 7TH CD — State Rep. Russell Fry, who’d been considering a primary challenge to Republican Rep. Tom Rice ever since the incumbent voted to impeach Donald Trump in January, announced Thursday that he would enter the race. Several other notable Republicans are already running, but when his name was first floated, the Post and Courier described Fry (who is chief whip in the state House) as “an up-and-comer in state GOP politics” with strong fundraising potential.

Most importantly, South Carolina requires runoffs between the top two vote-getters in the event that no candidate wins a majority in the primary. Rice, therefore, can’t count on squeaking through with a plurality.

PENNSYLVANIA 8TH CD — Businessman Teddy Daniels, who is once again seeking the Republican nomination to take on Democratic Rep. Matt Cartwright, appears to have had “a front-row view” for the Jan. 6 insurrection at the Capitol, according to new reporting from the Philadelphia Inquirer. On that day, Daniels posted a video of rioters chanting with the caption, “I am here. God bless our patriots.”

As the Inquirer notes, “If Daniels shot the video, he would have been well beyond the police barricades that day,” according to researchers. Daniels, whose Twitter feed is replete with bellicose tweets deriding others as fearful “sissies” and “pansies,” has not responded to questions from the newspaper. Last year, he came in second in the six-candidate GOP primary in Pennsylvania’s 8th Congressional District, losing to 28-24 to former Trump administration official Jim Bognet, who is considering a rematch.

MISSOURI 2ND CD — State Sen. Trish Gunby, who filed paperwork for a potential campaign against Republican Rep. Ann Wagner the other day, now confirms through a spokesperson that she will in fact run. She joins businessman Ben Samuels in seeking the Democratic nod.

VIRGINIA GOVERNOR — Democrat Terry McAuliffe’s newest TV commercial features a Danville man named Fred Adams praising the former governor for caring about communities like his at a time when so many politicians ignore rural areas. “When he was governor, Terry focused on bringing good paying jobs everywhere,” says Adams. “Terry cut rural unemployment in half when he was governor.”

This strategy is somewhat reminiscent of fellow Democrat Mark Warner’s, who famously focused on winning over voters in the state’s mountain communities during his successful 2001 campaign. That said, McAuliffe hasn’t yet tried reuniting Warner’s bluegrass band.