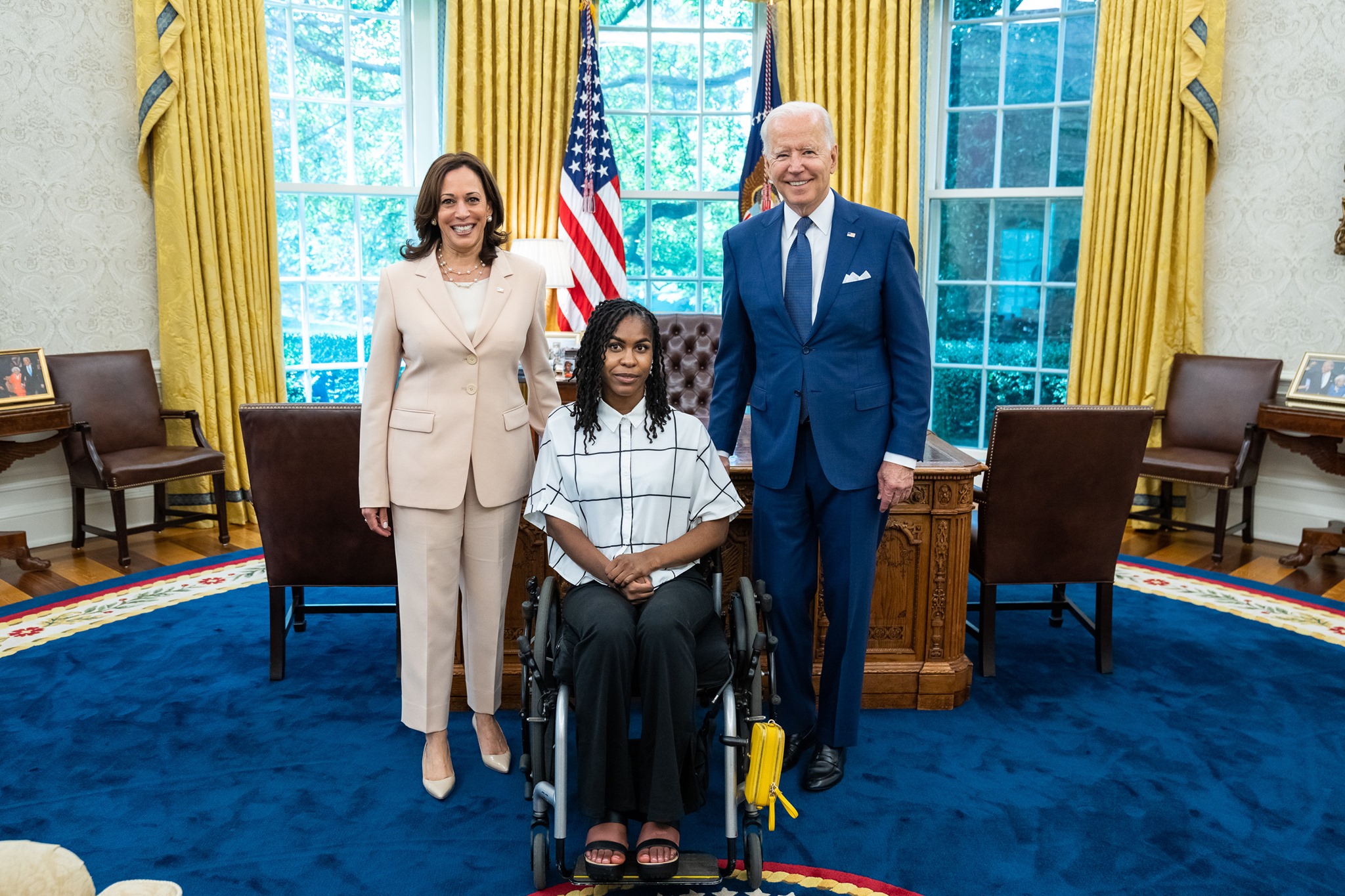 However, Manchin also said he could not guarantee that a Democratic-led reconciliation package would garner the necessary votes for passage, Politico reports.

Said Manchin: “I can’t really guarantee anybody. And I have not guaranteed anybody on any of these pieces of legislation. Would we like to do more? Yes, you can do what you can pay for. This is paid for, our infrastructure bill is all paid for.”

No senator in Minority Leader Mitch McConnell’s inner circle knew he was about to support Biden’s infrastructure bill “until moments before the vote,” Politico reports.  The fact he played it so close to the chest “reflects deep divisions in his conference over whether to hand Biden a victory.”

House Minority Leader Kevin McCarthy (R-CA) joked that it would be hard for him not to hit Speaker Nancy Pelosi (D-CA) with a gavel if his party wins control of the House in next year’s midterm elections.

Said McCarthy: “It will be hard not to hit her with it but I will bang it down.”

Rep. Bennie Thompson (D-MS) told the Washington Post that there is “no reluctance to subpoena” any member of Congress “whose testimony is germane to the mission of the select committee” if they resist cooperating voluntarily.

“But legal experts said there is little precedent for forcing lawmakers to testify as part of a congressional inquiry if they resist a subpoena, an issue members of the Jan. 6 panel said they have yet to fully investigate or plan for.”

“With the Taliban sweeping across much of the country, at least 30,000 Afghans are leaving each week. Many more have been displaced within Afghanistan’s borders,” the New York Times reports.

The FDA “is under pressure to swiftly grant full approval to Covid-19 shots, as vaccine mandates take on new urgency for schools, hospitals and employers amid surging cases from the rapidly spreading Delta variant,” the Wall Street Journal reports.

“However, only Pfizer has submitted all the necessary information to the FDA, and analysts expect it will be the first to get the green light. Moderna says it is still completing rolling data submissions, and Johnson & Johnson says it plans to file for full approval later this year.”

“The newly resurgent coronavirus could spark 140,000 to 300,000 cases a day in the United States come August, fueled by the highly transmissible delta variant and the widespread resumption of normal activities, disease trackers predict,” the Washington Post reports.

“The nation is already reporting more than 70,000 cases a day, according to The Washington Post’s rolling seven-day average — an increase of nearly 60,000 in the daily average in less than six weeks. Cases, measured as that rolling average, have risen to levels last seen in February.”

New York Times: “Days before a new hard-line president is set to be inaugurated in Iran, Biden administration officials have turned sharply pessimistic about their chances of quickly restoring the nuclear deal that President Donald Trump dismantled, fearing that the new government in Tehran is speeding ahead on nuclear research and production and preparing new demands for the United States.”

Doyle McManus: “Three months ago, Canada, which has no domestic manufacturer of COVID-19 vaccines, lagged far behind the United States in immunizations. Only 3% of its population was fully vaccinated. Canadians watched glumly as friends and relatives south of the border lined up for shots, while residents of Toronto and Montreal suffered repeated lockdowns.”

“No longer. Last month, Canada blew past the United States in the share of its population that’s fully vaccinated — 58% as of Friday, versus 49% in the U.S. — to take first place among the seven big industrial democracies. (The United States ranks sixth, ahead of only Japan.)”

Florida reported 21,683 new COVID-19 cases — the most in the state in a single day since the pandemic began, Axios reports.

Rep. Matt Gaetz (R-FL) told supporters at a campaign event that the “Florida variant” and “freedom variant” of COVID-19 has infected his brain.

He added: “It affects the brain. It gets you to think for yourself where you don’t just surrender to the truth that they’re trying to create in corrupt big media.”

Wall Street Journal: “Growing numbers of people are getting Covid-19 vaccines in areas hit hard by the Delta variant—offering a glimmer of hope but still far short of what is needed to end the pandemic.”

Washington Post: “More than 856,000 doses were administered Friday, the highest daily figure since July 3… This was the third week that states with the highest numbers of coronavirus cases also had the highest vaccination numbers.”

“Vaccine-hesitant pockets of the country turned hot spots, including Louisiana, experienced a 114 percent increase in uptake, according to the latest data from the Centers for Disease Control and Prevention. Arkansas recorded a 96 percent increase, Alabama, 65 percent, and Missouri, 49 percent.”

“A heated confrontation between Reps. Madison Cawthorn and David McKinley over cosponsorship of a bill has escalated to a McKinley staffer filing an ethics complaint against Cawthorn,” Politico reports.

“The spat began Thursday afternoon when the freshman Cawthorn (R-NC) went to find McKinley (R-WV) in his office to discuss what Cawthorn said was his mistaken addition to a bill that he didn’t want his name attached to. But when Cawthorn found McKinley out of the office, the youngest member of Congress instead got into a back-and-forth with the West Virginian’s staff.”

“The exchange was witnessed by multiple McKinley aides, who saw Cawthorn as raising his voice and dressing down their colleague. At one point, he told the legislative staffer to lower her voice because she was speaking to a member of Congress.”

Jeff Bezos offered to cover up to $2 billion in NASA costs if the U.S. space agency awards his company Blue Origin a contract to make a spacecraft designed to land astronauts back on the moon, The Guardian reports.

Nasa in April awarded SpaceX, owned by rival billionaire Elon Musk, a $2.9 billion contract to build a spacecraft to bring astronauts to the lunar surface as early as 2024, rejecting bids from Blue Origin and defense contractor Dynetics.

A brutal loss in a wargaming exercise over Taiwan last year convinced the Vice Chairman of the Joint Chiefs Gen. John Hyten to scrap joint warfighting concepts that had guided U.S. military operations for decades, Defense One reports.

Said Hyten: “Without overstating the issue, it failed miserably. An aggressive red team that had been studying the United States for the last 20 years just ran rings around us. They knew exactly what we’re going to do before we did it.”

“Now some public health experts and lawmakers are pressuring the CDC to reverse its decision and collect comprehensive data on infections in vaccinated people — from mild to severe. Such cases are very rare, but monitoring them can help reveal how likely a vaccinated person is to infect others, and how well vaccines work over time and against emerging Covid-19 variants.”