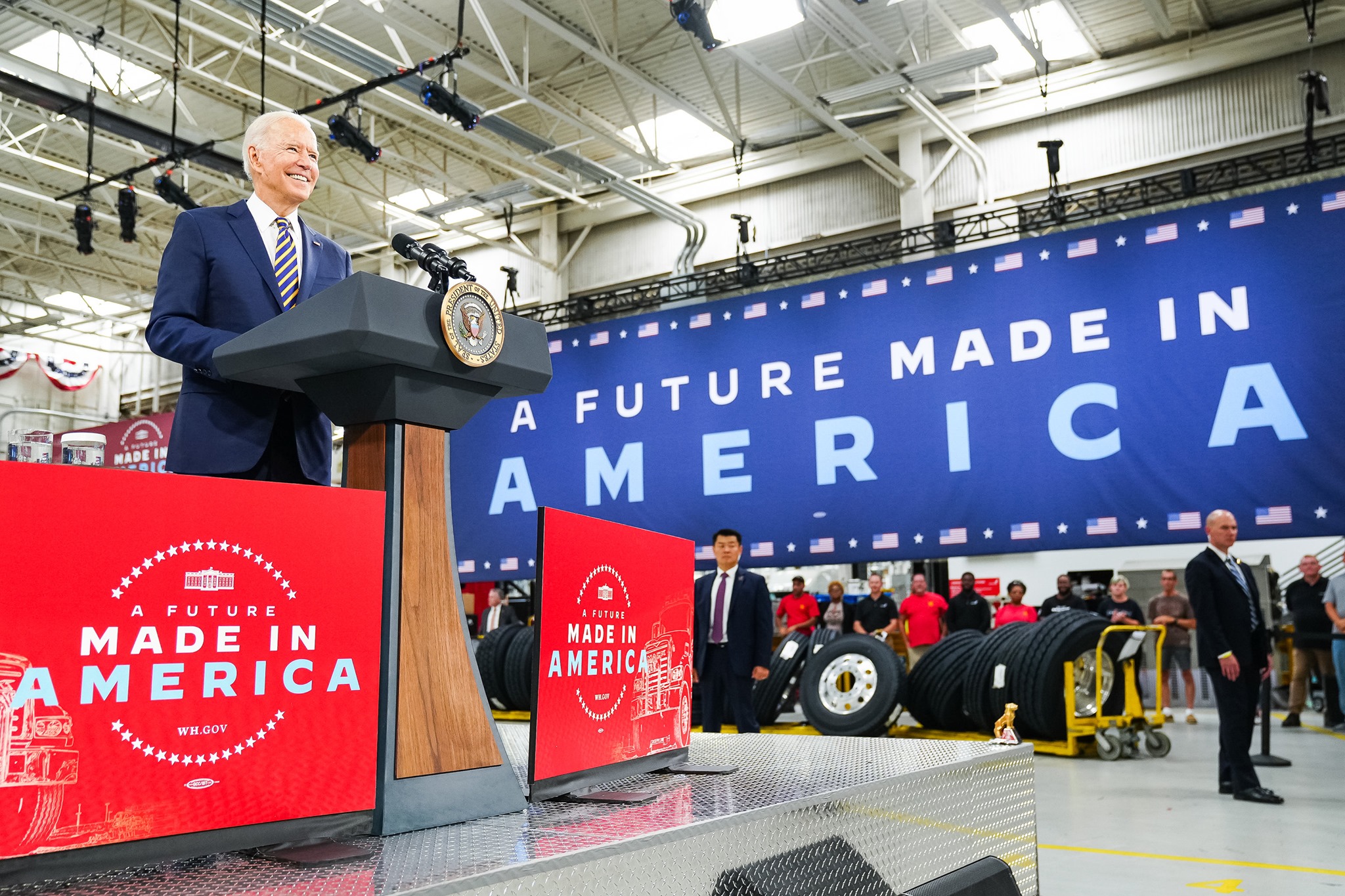 “Senate Republicans are raising concerns about Hershel Walker’s past in a state widely viewed as their best pickup opportunity next year,” Politico reports.  Said Sen. John Cornyn (R-TX): “Some of it’s pretty bad, obviously: physical abuse and pulling a gun on his wife, if that’s true.”

“Walker’s potential candidacy offers another test case for the former president’s influence over the GOP.”

Susan Glasser: “Still, it has long struck me that the Trump Presidency was very much a House-style Presidency, just as Biden’s politics have undoubtedly been shaped by his thirty-six years in the Senate. Performative politics, edgy partisanship, and lots of shouting have long been in the House’s DNA. Remember the Benghazi hearings?”

“For much of his time in office, Trump was literally surrounded by veterans of the most extreme House Republican faction: the Freedom Caucus. That group produced two of Trump’s four White House chiefs of staff: Mark Meadows and Mick Mulvaney. John Boehner, the former Republican Speaker of the House who quit under pressure from the Freedom Caucus, called them ‘political terrorists’ in his recent memoir.”

NEW YORK 11TH CD — Former state Assembly staffer Michael DeCillis, who was a first responder during the 9/11 attacks, kicked off a bid on Wednesday against Republican Rep. Nicole Malliotakis. DeCillis was initially a Democratic candidate for this seat in 2018, but he dropped out well before the primary after he raised little money. DeCillis joins Army veteran Brittany Ramos DeBarros in the contest for this Staten Island-based district.

OHIO U.S. SENATOR — Investment banker Mike Gibbons has announced that he’s reserved $10 million in TV and radio airtime for spots that will begin Friday and last through the May Republican primary, with $3 million of that going towards advertising for 2021. Gibbons, by contrast, had a total Senate campaign budget of $3 million in 2018 when he lost the nomination to then-Rep. Jim Renacci 47-32.

Gibbons can afford this huge early media booking because, thanks to his large personal investment, he ended June with the largest war chest in the primary. Gibbons raised only $535,000 from donors during the second quarter of 2021 but self-funded $5.7 million, and he had $5.9 million on-hand at the conclusion of last month.

The field also includes more well-funded Republicans. Former State Party Chair Jane Timken brought in $1.1 million (unlike last time, she did no self-funding) and had $2.1 million in the bank. Businessman Bernie Moreno, meanwhile, raised $2.2 million during his opening quarter and had $1.6 million on-hand. Another notable contender, venture capitalist J.D. Vance, got into the race after this fundraising period ended, though not before he’d fully purged his old anti-Trump Twitter history.

The only serious Democrat in the race, meanwhile, remains Rep. Tim Ryan. The congressman raised $2.1 million during his first quarter as a Senate candidate and ended June with $2.6 million in the bank.

Rep. Madison Cawthorn (R-NC) attempted to bring a handgun through security at the Asheville airport in February, the Raleigh News & Observer reports.

“DNC Chair Jaime Harrison is delivering a letter to over 20 U.S. cities today, inviting them to apply to host the 2024 convention,” Axios reports.

The Bulwark: “Some 35 major corporations have honored their January promises to cut off financial support to the 147 Republican certification objectors.”

“But not every company has behaved so honorably… Six of the household names are General Motors, Ford, UPS, Aflac, and Abbott and Merck, the mega-pharmaceutical companies. Each of the six said in January that they would suspend their political giving to Republican officials who voted not to certify the 2020 presidential election.”

The pro-Bernie Sanders group formed by his supporters after the 2016 presidential election, Our Revolution, is rebranding into “pragmatic progressives,” the AP reports.

“The shift reflects a progressive movement that is at a crossroads. Biden won the Democratic nomination last year by offering more centrist alternatives to much of Sanders’ agenda. Since then, progressive candidates have faced a series of electoral disappointments and are contending with anxiety from moderate Democrats worried that the party’s leftward shift could cost them control of Congress during next year’s midterm elections.”

MISSOURI 2ND CD — Democratic state Rep. Trish Gunby has filed FEC paperwork for a potential bid for the seat held by Rep. Ann Wagner, a Republican who is flirting with running for the Senate. The current version of this suburban St. Louis seat voted for Donald Trump just 49.18-49.16, which made it the closest of any of the nation’s 435 congressional districts, but the GOP legislature has the power to gerrymander it all over again.

Gunby would join a primary that includes Ben Samuels, whom we hadn’t previously mentioned. Samuels recently finished a stint working for the administration of Massachusetts’ Republican Gov. Charlie Baker, though he says he did his job remotely from Missouri during the pandemic. Samuels’ campaign said Tuesday that he’d raised $360,000 during his first few weeks in the race.

OHIO 11TH CD — Former state Sen. Nina Turner’s latest attack ad claims that Cuyahoga County Councilwoman Shontel Brown is “facing investigation by the Ohio Ethics Commission” and “could face … jail time,” though that “could” is doing a ton of work here, especially since there’s no confirmation that any such investigation actually exists.

The background: In April, The Intercept reported that Brown, while on the county council, had voted to approve contracts to companies with ties to her partner, Mark Perkins. A paywalled piece published this week at the Daily Poster (a site founded by former Bernie Sanders adviser David Sirota) and co-authored by left-wing essayist Walker Bragman now says that the Intercept’s allegations were reviewed by the office of state Auditor Keith Faber, a Republican, and were referred to the Ohio Ethics Commission.

The post by Bragman, who’s best known for a notorious 2016 piece headlined, “A liberal case for Donald Trump,” was then republished by Newsweek, a once-respected outlet that long ago collapsed into what The New Republic’s Alex Shepard last year called a “zombie publication, whose former legitimacy is used to launder extreme and conspiratorial ideas.”

It’s this Newsweek version that Turner’s ad prominently cites, showing the magazine’s logo onscreen in two locations simultaneously, along with the text of the article (though it deletes the headline, which calls Brown the “Hillary Clinton-endorsed Candidate”). A narrator then claims that Brown is “facing investigation by the Ohio Ethics Commission” and “could face criminal charges, and if convicted, jail time”—as a prison door is shown slamming shut.

But the commission, as the Daily Poster’s own piece notes (albeit in the final paragraph), has refused to “confirm or deny” the existence of any investigation. Brown’s campaign has declined to comment on the story throughout, and local media outlets haven’t covered it, so there’s no reliable reporting as to whether there even is an investigation underway, let alone whether one might lead to criminal charges or a prison sentence.

The ad may in fact say more about the state of Turner’s campaign than about Brown, seeing as Turner hasn’t otherwise responded to recent polls showing Brown closing what was once a sizable gap. There’s also little time for this spot to have an impact with the Democratic primary on Tuesday, especially since early voting began weeks ago.

SOUTH DAKOTA AT LARGE CD — The ABC affiliate KOTA reports that state Rep. Taffy Howard is “likely to make an announcement in the coming weeks” about challenging Rep. Dusty Johnson in the Republican primary. Howard did not confirm she’ll go up against this very red state’s lone House member, but did say she was “exploring all possibilities.”

Johnson has been a fairly low-key but ardently loyal Trump supporter, while Howard has established herself as a conservative zealot. This year, she loudly complained after Republican Gov. Kristi Noem vetoed an anti-trans bill. Howard also picked a fight with the governor when she sponsored an unsuccessful bill that would have required Noem, who is a potential 2024 presidential candidate, to disclose the security costs of her out-of-state trips.

Noem isn’t the only big-name Republican Howard has gone after. Goss notes that last week, the state representative spoke at an “America First” rally that was co-sponsored by a group dedicated to challenging Sen. John Thune in the primary. Howard, though, doesn’t appear to have yet thrown any bombs at Johnson, her would-be opponent.

Johnson himself won renomination last year by turning back former state Rep. Liz Marty May 77-23, and he ended June with $1.5 million on-hand.