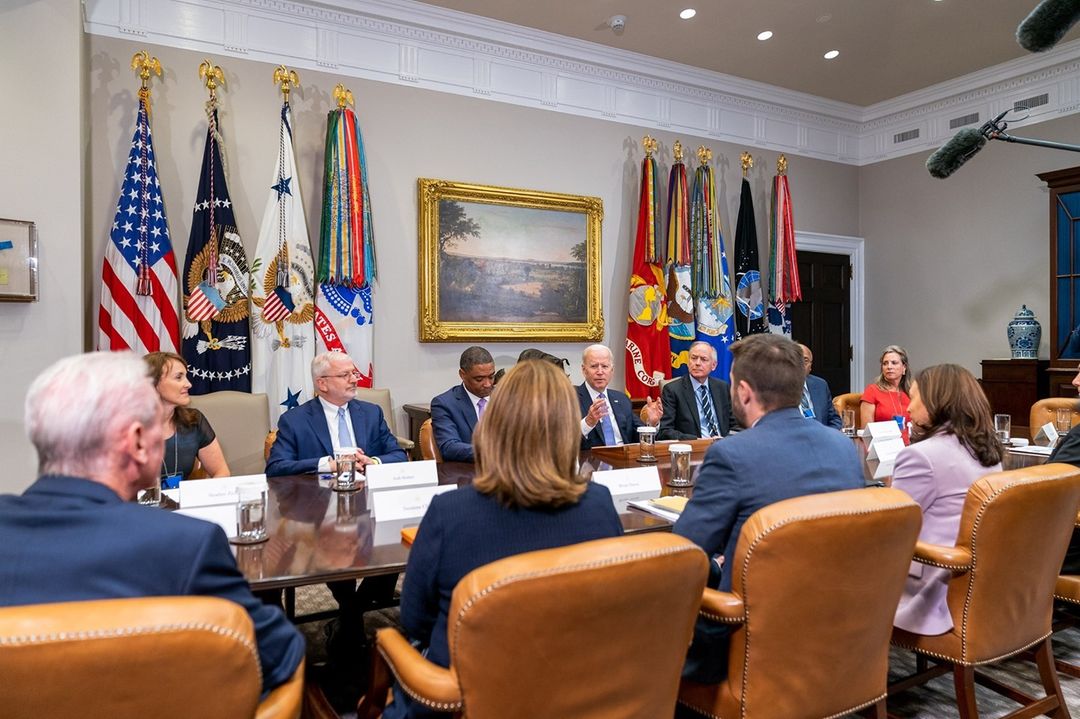 “Joe Biden wagered his campaign and now his presidency on the premise that government itself could still work, even at a time of fractious political division,” the AP reports.

“When the Senate voted this week, with bipartisan support, to begin work on an infrastructure bill that Biden supported, he seemed to have proof of the concept.”

“But the triumph was overshadowed by the surging delta variant of the coronavirus that has forced the restoration of mask guidelines, imperiled the nation’s economic recovery and threatened Biden’s central promise that he would lead the United States out of the pandemic.”

CNN: “The administration is worried that the media’s focus on these instances of breakthrough infections might lead to people being more hesitant to get a vaccine.”

Said one official: “The media’s coverage doesn’t match the moment. It has been hyperbolic and frankly irresponsible in a way that hardens vaccine hesitancy.”

Indeed, the latest refrain from the unvaxxed is “why get the vaccine when you can still get COVID anyway?” Well, that’s not entirely true, as this chart above proves. 99.923% of those who are vaccinated have not gotten infected. Some have yes. But only 126,280 people out of 164,000,000 million Americans. Or 0.077%. And out of those people, only 0.004% have been hospitalized because they has serious life threatening symptoms, and only 0.001% of them have died. The vaccine protected the vast majority of those 126,280 people from getting very sick or dying (only 6,560 had to go to the hospital and of those only 1,640 have died). We are talking astronomically small numbers. But if you remain unvaccinated, you remain unprotected, and you will get COVID and it is likely you will get seriously ill and die. So go ahead, take your chances

Andrew Sullivan: “We are at a stage in this pandemic when we are trying to persuade the hold-outs — disproportionately white Republicans/evangelicals and urban African-Americans — to get vaccinated. How do we best do this? Endless, condescending nagging won’t help. Coercion is not an option in a free country. Since the vaccinated appear to be able to transmit the virus as well, vaccine passports lose their power to remove all risk. Forcing all the responsible people to go back to constraining their everyday lives for the sake of the vaccine-averse is both unfair and actually weakens the incentive to get a vaccine, because it lowers the general risk of getting it in the broader society.”

“So the obviously correct public policy is to let mounting sickness and rising deaths concentrate the minds of the recalcitrant. Let reality persuade the delusional and deranged. It has a pretty solid record of doing just that.”

Playbook: “At midnight tonight, federal protections barring evictions will expire, putting millions of Americans at risk of losing their homes during the pandemic.”

“The expiration has led to a wave of infighting between the White House and House Democrats over the administration’s last-second punt to Congress on the issue — a bit of a surprise, given how closely the Biden administration tends to work with House leadership.”

Politico: “Some Democratic lawmakers have privately said they are outraged by the debacle and the lack of notice from the White House.”

Frank Newport: “First, there is room for vaccine uptake improvement in the U.S.”

“Second, vaccine hesitancy is deeply entrenched with the partisan differences in views of the world that control much of American social and political discourse these days.”

“Third, efforts to control vaccine-related behavior through mandates may be more effective than attitudinal campaigns.”

Speaker Nancy Pelosi (D-CA) is expected to extend proxy voting through the fall — and potentially until the end of the year, Axios reports.  “The spread of the Delta variant has alarmed both members and staffers anxious about interacting with the unvaccinated. Pelosi’s anticipated move — continuing an emergency COVID-19 measure enacted last year so lawmakers could vote remotely — is aimed at allaying those concerns.”

Peggy Noonan: “These are the reasons what happened on 1/6 can’t be allowed to become normal. One way to discourage that is to see that all involved pay a steep practical and reputational price—public exposure, shame and, when a crime can be proved, prison time. To determine who deserves this requires investigation.”

“Indignation is a form of loyalty. You protect the things you love.”

She concludes: “Nail this story down. Nail everyone involved. Then, and only then, move on.”

Associated Press: “President Joe Biden on Tuesday nominated Julissa Reynoso, the chief of staff to first lady Jill Biden and a former ambassador, to serve as his ambassador to Spain and Andorra.”

“President Joe Biden announced Friday plans to nominate Khizr Khan, who famously criticized Donald Trump for his disparaging remarks on Muslim-Americans during the 2016 Democratic National Convention, to a post with the U.S. Commission on International Religious Freedom,” Politico reports.

Bloomberg: “Jay Powell is the front-runner for another term as chairman, but Democrats could push for Lael Brainard and other key appointments.”

Jonathan Bernstein: “People mock Democrats for having unusually old leaders in Congress, especially in the House, but no one should doubt the competence of Speaker Nancy Pelosi in particular and of House and Senate Democrats as a group. The leadership team has experience passing complex legislation that Republican Speaker Paul Ryan and his team simply didn’t have. The same goes for key committee posts.”

Commerce Secretary Gina Raimondo “said some tariffs on imported goods can be effective, citing the steel levies enacted by the Trump administration as helping to counter an oversupply of the product from China,” Bloomberg reports.  Said Raimondo: “If China is not going to play by the rules, then there’s a place for tariffs. Sometimes tariffs can be very effective.”

Former Oregon state Rep. Mike Nearman (R) pleaded guilty “to one count of official misconduct in the first degree for letting rioters into the closed Oregon Capitol building during a special legislative session on Dec. 21, 2020,” the Salem Statesman Journal reports.

“As a result of the negotiated plea agreement, Nearman was sentenced to 18 months probation, during which he will need to complete 80 hours of community service and is banned from the Capitol building and grounds.”

Matt Lewis: “While lack of communal ties may be killing us at the micro level, on the macro level this phenomenon has contributed to numerous societal ills, including the rise of Trumpism.”

“In the 2016 Republican primary, for example, it was well documented that Trump performed better in places where people were socially atomized. For example, Republicans who attended church regularly were less likely to support Trump.”

“If you are surrounded by friends and family or are otherwise well-adjusted, this probably won’t resonate. But if you are lonely and marginalized (or think you are, like so many of today’s MAGA fans), it will resonate.”

Elliot Morris: “Sen. Ben Sasse (R-NE) and others have argued that a decline in religiosity in America has left people vulnerable to the false spiritual satisfaction of conspiracy theories and sectarianism, for example in QAnon.”

“But we find the opposite. The least religious are the least credulous.”

Wall Street Journal: “America’s weak population growth, already held back by a decadelong fertility slump, is dropping closer to zero because of the Covid-19 pandemic.”

“In half of all states last year, more people died than were born, up from five states in 2019. Early estimates show the total U.S. population grew 0.35% for the year ended July 1, 2020, the lowest ever documented, and growth is expected to remain near flat this year.”

Associated Press: “It was 11:30 a.m. on March 19, 2015, and the klansmen were celebrating what they thought was a successful murder in Florida. But the FBI had gotten wind of the murder plot. A confidential informant had infiltrated the group, and his recordings provide a rare, detailed look at the inner workings of a modern klan cell and a domestic terrorism probe.”

“That investigation would unearth another secret: An unknown number of klansmen were working inside the Florida Department of Corrections, with significant power over inmates, Black and white.”

“New York Gov. Andrew Cuomo, facing a cascade of misconduct claims earlier this year, dashed off a letter in March directing state Attorney General Tish James to investigate the scandals that were threatening to end his career. When James is done with her work, Cuomo assured the public, everyone will see he had done nothing wrong,” Politico reports.

“James and the outside attorneys she hired to conduct the work appear close to wrapping up the inquiry… But Cuomo’s top aides no longer seem convinced James will deliver the findings their boss had promised and staked his future on. In recent days and weeks, the governor’s communications team has sprinkled comments about any investigation-related news with assertions that James… is using the probe to launch her own run for governor next year.”