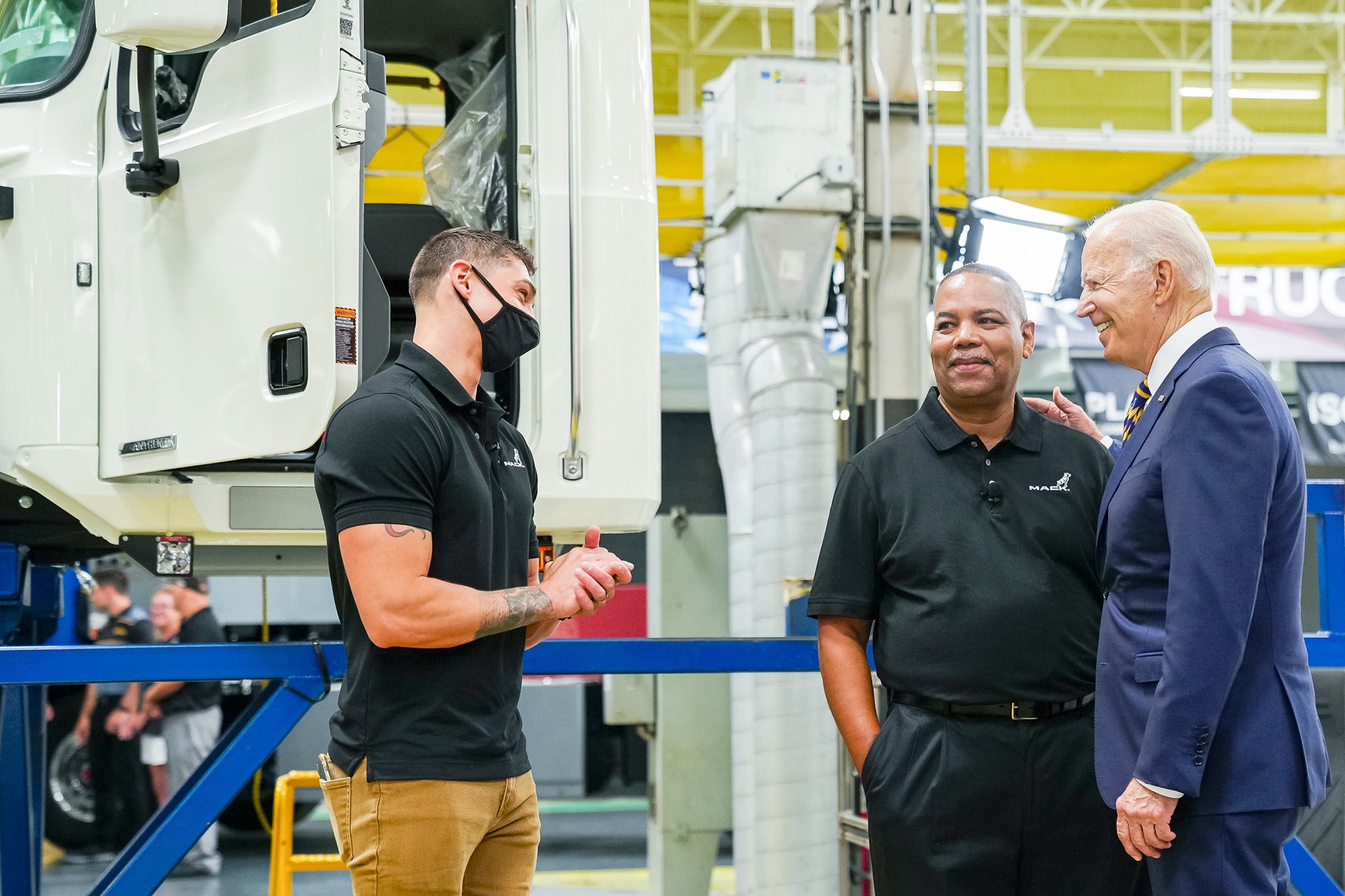 A new survey finds nearly two-thirds of Americans say they’d support federal, state or local governments requiring everyone to get a coronavirus vaccine.

Also interesting: 45% of Republicans said they approve of such mandates. A majority of respondents in all but three states — Wyoming, North Dakota and South Dakota — said they support requirements that everyone be vaccinated.

Playbook: “The White House has been tripping over themselves for months to emphasize that they have no plans to create vaccine mandates, with an eye on the conservative media outlets that have been trying to stir up fear about the prospect. But it turns out … that’s actually what Americans want.”

Geoffrey Skelley: “Partisanship isn’t the only thing that has shaped Americans’ vaccination status. Unvaccinated Americans tend to be younger, less well-educated and poorer; they are also more likely to be a person of color. The situation we’re in is not just because of politics but also because of access to the vaccine and broader skepticism of the health care system.”

“The younger someone is, the more likely they are to be a person of color, so it’s also unsurprising that Black and Hispanic Americans have lower vaccination rates than non-Hispanic white Americans.”

Charlie Cook: “Democratic hopes of retaining their slim majorities in Congress are almost entirely dependent upon President Biden not sinking them.”

A new Associated Press-NORC poll finds 6 in 10 Democrats say they’re optimistic about their party’s future, and Democrats nearly universally — 92% — approve of the way President Biden is handling his job.

“But the party is divided over the best strategy for accomplishing its agenda. About half say Democrats should compromise with Republicans, even if it means giving up things they want. The other half say Democrats should stick to their positions no matter what, even if it means they would have to find a way to pass laws without Republican support.”

A new GW Politics poll finds that 47% of Republican voters believe that a time will come when “patriotic Americans have to take the law into their own hands.”  Just 9% of Democrats agreed with that statement.

CALIFORNIA GOVERNOR — Democratic Gov. Gavin Newsom’s newest commercial stars Massachusetts Sen. Elizabeth Warren, who warns the audience that the Trump supporters who are attacking voting rights are “coming to grab power in California, abusing the recall process, and costing taxpayers millions.” She continues, “Here’s how we stop them. Every Californian will get a mail-in ballot for the Sept. 14 election. Vote no to protect California and our democracy.”

If California Gov. Gavin Newsom is recalled, he predicts the effects would be felt “all across the country” for “many, many years,” arguing that it could boost Republican chances in the 2022 midterms, the Sacramento Bee reports.

Said Newsom: “If this was a successful recall, I think it would have profound consequences nationwide, and go to not just politics, but to policy and policymaking.”

Philadelphia’s elections board voted Friday to reject a Republican state senator’s request for access to its voting machines for a “forensic investigation” into former President Donald Trump’s 2020 reelection defeat, the Associated Press reports.

Associated Press: “The highest ranking Republican in the Wisconsin Assembly said Friday that he was expanding a probe into the 2020 presidential election, saying it will take more investigators and time than originally planned.”

The Hill: “Six months into office, polls indicate Harris is viewed less favorably than President Biden. She has also made some tactical missteps outside of the White House that Democrats say show she hasn’t quite yet found her bearings.”

“Harris’s polling numbers are raising questions about how she might be used as Democrats seek to hold on to slim majorities in the House and Senate.”

The Make America Great Again PAC was about to kick off a $300,000 buy, a move characterized as a “last-minute decision.” Unsurprisingly, the commercial is focused on informing the viewer who Carey’s biggest supporter is: The ad shows a clip of Trump saying, “And he’s a wonderful man, I’ve known him for a long time, Mike Carey.”

Trump himself has also been using his not-tweets to reaffirm his endorsement. On Tuesday afternoon, just ahead of the Texas loss, he emailed out a statement reading, “Numerous candidates in the Great State of Ohio, running in Congressional District 15, are saying that I am supporting them, when in actuality, I don’t know them, and don’t even know who they are.” He added, “But I do know who Mike Carey is — I know a lot about him, and it is all good.” Carey’s many rivals have put out their own materials touting their allegiance to Trump, but there’s no word on any of them pretending to have his backing.

All of this comes at a time when Carey is getting outspent on the air. The GOP firm Medium Buying said Wednesday morning that the contender who has spent the most on radio and TV is golf club owner Tom Hwang, who has been almost entirely self-funding his campaign. Hwang has deployed $485,000 on media while state Sen. Bob Peterson holds a $265,000 to $235,000 spending edge over Carey.

Hwang is also using his largess to air a commercial that utilizes the bribery scandal involving the nuclear power company FirstEnergy, which resulted in Republican Larry Householder’s removal as state House speaker and his eventual expulsion from the chamber, as a bludgeon against Carey and two other foes. The spot features a trio of people at a restaurant talking about the election: When one suggests voting for Carey, her companion jumps in, “Ha! He’s a Washington lobbyist whose clients spent a ton on that big House Bill 6 Larry Householder bribery scandal?”

The final diner then asks about two other contenders, Peterson and state Rep. Jeff LaRe, only to be told, “They both voted for that bill, and we’re still paying.” The ad ends by touting Hwang as someone who “is not a politician, and he’s not a lobbyist.”

While Hwang has spent the most on ads, though, outside groups are helping other candidates on the air. Medium says that Protect Freedom PAC, which is run by allies of Kentucky Sen. Rand Paul, has shelled out $475,000 to aid another contender, former state Rep. Ron Hood. Medium did mention any spending by the campaign of Hood, who is most infamous for a 2019 bill that would have forced doctors who performed an abortion to either face murder charges or “reimplant” an ectopic pregnancy, a procedure that the American College of Obstetricians and Gynecologists says is impossible.

The old campaign of Stivers, meanwhile, has deployed $300,000 to boost LaRa, which is similar to what MAGA PAC is dropping for Carey. A group called Conservative Outsiders PAC, though, has spent $220,000 on ads attacking Carey. Inside Elections’ Jacob Rubashkin notes that, like Protect Freedom PAC, this anti-Carey organization is heavily funded by businessman Jeff Yass, who is also a prominent contributor to the radical anti-tax Club for Growth.

The only poll we’ve seen of this entire race was a late June Carey internal that gave him a 20-9 edge over LaRe, but that was taken before much advertising had taken place. An unnamed “Republican strategist familiar with internal polling data” told Politico that they’ve seen numbers showing a “contest between Carey and Hood,” though there’s no other information.

CNN: “After the Trump-backed candidate in Texas’ 6th Congressional district runoff election lost this week, the pressure is now on the former President to prove his endorsement — one of his most powerful tools within the Republican Party — still holds significant sway in GOP primaries.”

“Trump endorsed coal lobbyist Mike Carey in the special election for Ohio’s 15th Congressional District in early June, throwing his weight behind a political novice in a race against a host of other Republicans, including multiple local elected officials. The Republican primary to replace former Rep. Steve Stivers, who left Congress earlier this year to lead the Ohio Chamber of Commerce, is Tuesday.”

“Trump has not had a big win in quite a while. I think without wins, his political capital is depleted.” — GOP strategist Alex Conant, quoted by The Hill.

Politico: “National Republicans are making a big investment in the Virginia governor’s race, an indication that the GOP sees an opportunity in a state that many in the party had written off until recently. The Republican National Committee is dispatching over 100 field staffers to the state, nearly doubling the size of its program in Virginia’s 2017 race for governor… The organization is also opening 13 offices across the state.”

MISSOURI U.S. SENATOR — Former Missouri Gov. Jay Nixon (D) announced he won’t run for U.S. Senate in Missouri. The decision could deprive Democrats of a high profile candidate in a race that could be competitive if former Gov. Eric Greitens (R) is the Republican nominee.

On the GOP side, though, one potential candidate may be close to revealing his plans. Rep. Billy Long, who represents the 7th District in the southwest corner of the state, has a “Birthday Celebration and Special Announcement” set for Aug. 11 that will be headlined by Trumpworld favorite Kellyanne Conway. Long himself raised an underwhelming $200,000 for his federal campaign account, which could be used for either a reelection bid or a Senate run, and he ended June with $560,000 in the bank.

Long hails from one of the biggest sources of GOP votes in the state, though he may not be able to count on as much local support as he might want. While the former auctioneer has never faced serious intraparty opposition since he won his first race in 2010, he’s also never exceeded 66% of the vote in any of his nomination fights. We’re not sure exactly why so many primary voters keep opting for Some Dudes over their incumbent, especially since Long doesn’t seem to have done anything serious to alienate conservatives.

Meanwhile another Republican who had once been mentioned as a possible contender, state Treasurer Scott Fitzpatrick, announced this week that he’d run for state auditor instead. That job is occupied by retiring incumbent Nicole Galloway, the Democrats’ 2020 gubernatorial nominee who is also Team Blue’s only statewide elected official.

NEW YORK GOVENROR — Brian Schwartz of CNBC reports that Democratic state Sen. Alessandra Biaggi is considering a primary bid against Gov. Andrew Cuomo; Schwartz also relays that Biaggi could also be considering a run for a lower statewide office, such as state comptroller and lieutenant governor. Biaggi did not rule out running for governor earlier this year and her spokesperson did not dispute this new report.

ALASKA U.S. SENATOR — Democratic state Sen. Elvi Gray-Jackson told the Alaska Landmine this week that she was considering entering next year’s top-four primary election against the two main Republicans, incumbent Lisa Murkowski and former state cabinet official Kelly Tshibaka. Gray-Jackson was elected in 2018 in a heavy blue state Senate seat in Anchorage, a win that made her the second Black woman to ever serve in the chamber, and the site says she “is known for her fundraising abilities.”