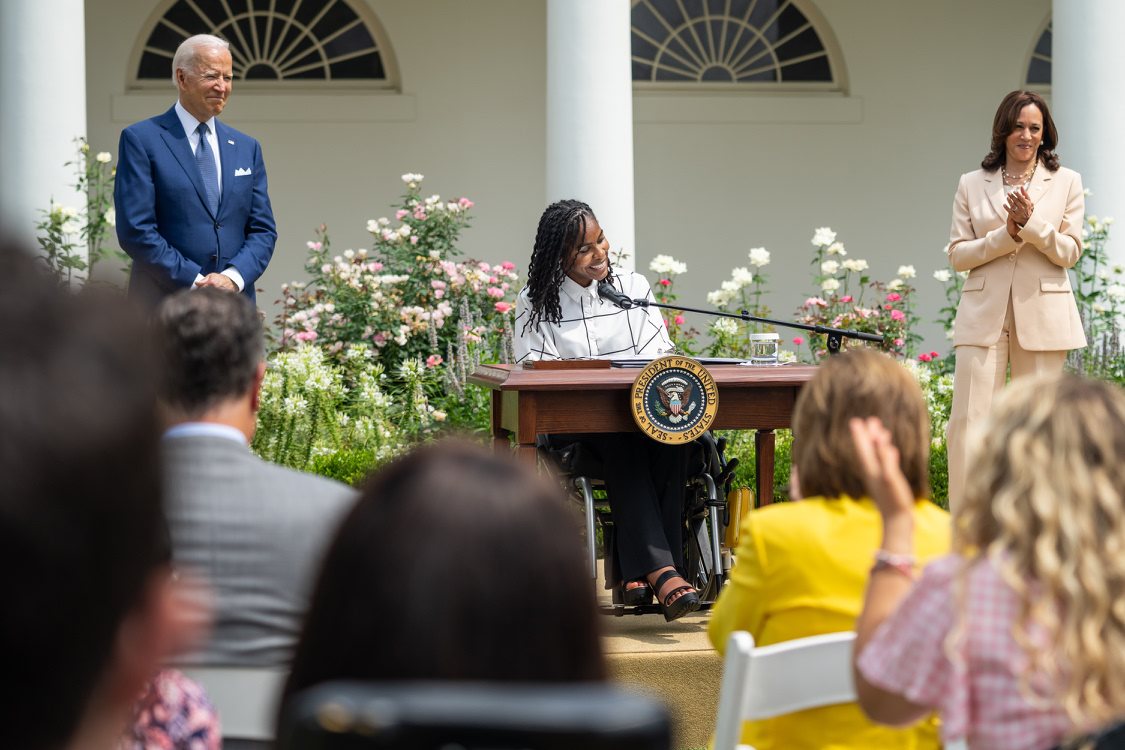 The CDC is expected to revise its mask guidance this afternoon, saying fully vaccinated Americans “should wear masks indoors in communities where there is substantial or high transmission,” CBS News reports.

CNN reports the CDC will also announce they are recommending everyone in K-12 schools wear a mask, regardless of vaccination status.

“Top Biden administration officials are weighing whether to recommend that states and communities with low vaccination rates reimpose mask mandates, particularly indoors, as part of discussions on how the administration can do more to slow the spread of the Delta variant,” Politico reports.

Axios: The floodgates have opened for vaccine mandates.

“President Biden said that the federal government was considering making vaccines mandatory for its workforce — what would be a significant escalation in push to expand vaccine coverage as the coronavirus surge from the Delta variant sends shockwaves through the country,” the Washington Post reports.

“State governments, private businesses and even part of the federal government are suddenly embracing mandatory coronavirus vaccinations for their employees,” Axios reports.

“The vaccination effort seems to have run out of carrots to incentivize more people to get a shot, and with rates remaining as low as they are in light of a worsening domestic situation, resorting to sticks has clearly become a more attractive option.”

“With more states considering vaccine requirements for public employees, the president of the AFL-CIO was asked Tuesday whether the labor federation supports vaccine mandates in the workplace,” the HuffPost reports.

Said President Richard Trumka: “Yes, we do. If you’re coming back into the workplace, you have to know what’s around you.”

“Florida’s Covid crisis has wedged Gov. Ron DeSantis between two competing forces: public health experts who urge him to do more and anti-vaxxers who want him to do less,” Politico reports.

“As Covid infections swell across the state, DeSantis’ major achievement has the potential to backfire on him ahead of his 2022 reelection campaign and potential 2024 presidential bid.”

Associated Press: “One of Louisiana’s largest hospitals announced Monday it has temporarily stopped taking inpatients for nonemergency surgeries, as it grapples with a steadily increasing influx of COVID-19 patients amid the state’s latest spike in cases.”

“Louisiana has one of the lowest coronavirus vaccination rates in the nation.”

Said Chairman Bennie Thompson (D-MS) in his opening statement: “And while our institutions endured, and while Joe Biden is the legitimately elected president of the United States, a peaceful transfer of power didn’t happen this year.”

Rep. Liz Cheney (R-WY) ended her opening statement this way: “Our children are watching, as we carry out the solemn and sacred duty entrusted to us. They will know who stood for truth. They will inherit the nation we hand to them — a Republic, if we can keep it.”

Playbook: “The House’s Jan. 6 committee makes its debut this morning.”

“McCarthy’s rather abrupt decision last week to pull his members from the Jan. 6 committee means that Democrats — and their two GOP allies on this issue, Liz Cheney and Adam Kinzinger — will have free rein to set the narrative. (This is why several folks on McCarthy’s own leadership team thought that pulling out was a bad idea.)”

“But ask yourself this: Do you think McCarthy’s complaints about Pelosi will mollify Donald Trump when he turns on his TV and sees no Republicans on the dais defending him?”

“We must know what happened here at the Capitol. We must also know what happened every minute of that day in the White House — every phone call, every conversation, every meeting leading up to, during and after the attack. Honorable men and women have an obligation to step forward.” — Rep. Liz Cheney (R-WY), in her opening statement before the House Select Committee investigating the January 6 attack.

House Republican leaders teed off on Nancy Pelosi this morning, accusing the Speaker of neglecting her duty to defend the Capitol on Jan. 6, The Hill reports.

“Yet in a sign of just how partisan the debate surrounding the insurrection has become, the Republicans offered no critique of the former president, who had encouraged his supporters to march on the Capitol on Jan. 6 to block the certification of his election defeat — the spark that inspired the deadly riot.”

This is exactly like when a violent husband blames his wife for making him hit her.

The opening testimony by four police officers does clarify Donald Trump’s hold on his coalition, including the Republican lawmakers who continue to defend him.

Not all Trump supporters are racists. But many of them accepted racism as an overall part of the package. They were willing to overlook Trump’s racist comments because they approved of him in other ways.

Similarly, not all Trump supporters support violence to achieve his political goals. But all of them have to know — especially as these hearings get underway — that they are supporting someone who is more than willing to incite violence for his own power. That is part of the overall package. And therefore, anyone who supports Donald Trump is a fascist.

Sen. Kyrsten Sinema (D-AZ), the top Democratic negotiator on the bipartisan infrastructure deal, is scheduled to visit the White House this afternoon to meet with President Biden, NBC News reports.

Said Sen. Susan Collins (R-ME), when asked if she expects the group to eventually reach a deal: “Ultimately, yes. But it’s painful.”

The Justice Department told former Trump administration officials that they could testify to the committees investigating the Jan. 6 Capitol riot, the New York Times reports.

Axios: “The move counters the view of President Trump, who has argued that his decisions made as president are protected by executive privilege.”

“A court battle could ensue if Trump sues in an attempt to block testimony.”

The Washington Post editorial board called for the Democrats to subpoena Jared Kushner, Ivanka Trump and Mark Meadows for testimony. They also said Kevin McCarthy should speak to the committee too.

Punchbowl News: “But there are tons of hurdles to overcome first. Will any of these members of Trump’s inner circle speak to investigators voluntarily? We can’t imagine they will. And what if Trump exerts an executive privilege claim and refuses to make senior aides available for questioning, which seems highly possible? Will the Merrick Garland Justice Department defend the right for Meadows, Ivanka and Jared to have private conversations with the former president?”

Gaetz was ushered away by security while a woman repeatedly yelled, “Are you a pedophile?”

“Rep. Matt Gaetz’s (R-FL) future sister-in-law appears to have had more than enough of the Florida congressman, posting three TikTok videos in the last two days slamming him as ‘weird and creepy’ and ‘a literal pedophile,’” the Daily Beast reports.

“Roxanne Luckey—the sister of Gaetz’s fiancée, Ginger Luckey—was sharply critical of the congressman and his treatment of young women, saying she ‘unfortunately was not surprised’ to have learned Gaetz was under federal investigation for sex crimes.”

The Hill: “In a 33-page brief, Sens. Josh Hawley (R-MO), Mike Lee (R-UT) and Ted Cruz (R-TX) asked the court to use a Mississippi case to be reviewed next term as a vehicle to overturn Roe v. Wade and related rulings.”

Wrote the three Senators: “Roe and Casey should be overruled, and the question of abortion legislation should be returned to the states.”

Roll Call: “K Street lobbyists this week took a downright jubilant tone when discussing their most recent public disclosures, which reflected an uptick in business fueled by massive government spending; debate over an infrastructure deal and possible tax increases to help foot the bill; and regulatory actions in the Biden administration.”

“A limited return of congressional earmarks and the slim majorities in both chambers have also been a boost to lobbyists’ business.”

Legendary Watergate journalist Carl Bernstein called former President Donald Trump an “American war criminal” in a CNN interview, citing recent books reporting that top generals feared Trump would stage a coup after losing the election.  Said Bernstein: “I think we need to calmly step back and maybe look at Trump in a different context. He is our own American war criminal of a kind we’ve never experienced before.”

Reuters: “Biden on Sunday said he remained adamant about the need to create a pathway for U.S. citizenship for so-called Dreamer immigrants, but it ‘remains to be seen’ if that will be part of a $3.5 trillion budget measure.”

After being handed a semi-automatic rifle as a present at a rally earlier this month, Donald Trump ally and former general Michael Flynn joked “maybe I’ll find somebody in Washington, D.C,” Newsweek reports.

“Even the Taliban oppose abortion.”  — Texas state Rep. Matt Schaefer (R), quoted by USA Today, defending the new Texas anti-abortion law.   We know. Exactly.  This is not the stellar Mr. Schaefer thinks it is.

A criminal complaint charges a man sent numerous violent emails to Dr. Anthony Fauci, threatening to break every bone in his “disgusting elf skull” and sew his scalp onto a rat, while warning that the famed public health researcher would soon be “hunted, tortured, beaten, and enslaved,” the Daily Beast reports.

Elected officials in a conservative Michigan county who gave themselves “hazard pay” bonuses of $65,000 with federal COVID-19 relief aid said they will return the money following days of criticism, the AP reports.

Rep. Blake Moore (R-UT) “failed to properly disclose dozens of stock and stock-option trades together worth at least $70,000 and as much as $1.1 million,” Insider reports.  Moore is a member of the House Armed Services Committee and invested in the defense contractor Raytheon.

Sen. Tommy Tuberville (R-AL) “bought and sold more than $1 million worth of securities during his first five months in the Senate, buying and selling stock in some companies with business before his committees,” Forbes reports.

Detroit News: “A Michigan lawmaker reported spending $221 of his campaign money at a strip club in Dearborn for a March 8 ‘constituent meeting’ to discuss ‘potential economic projects.’”

A new study finds the recent deadly heat wave in the Pacific Northwest, during which all-time temperature records were shattered by several degrees, is a prologue to what is coming across much of the U.S., Europe and Asia, Axios reports.

“He’s then aiming for even tougher anti-pollution rules after that to forcefully reduce greenhouse gas emissions and nudge 40% of U.S. drivers into electric vehicles by decade’s end.”