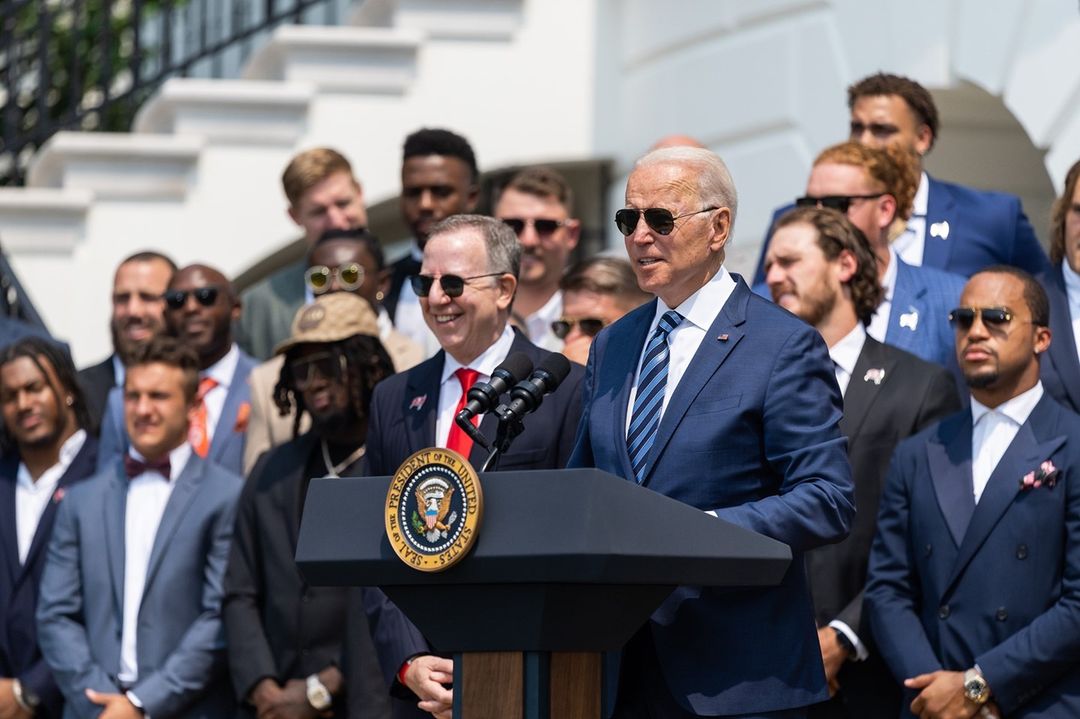 Harry Enten: “The lack of a topsy turvy first few months has translated to Biden’s approval rating. It’s been the most stable for any president since the end of World War II.”

“With a rising drumbeat of criticism, several Republican Georgia legislators are building a case for the state government to take over Fulton County elections,” the Atlanta Journal-Constitution reports.

“The newfound power to fire local elections management, created by Georgia’s voting law, worries voting rights advocates, who say it could be abused for partisan purposes to tamper with the heavily Democratic county.”

TEXAS GOVERNOR — “Beto O’Rourke might very well become a candidate for governor, but he wants to keep his focus on his work with grassroots civic engagement organizations for now,” the Dallas Morning News reports.

Said O’Rourke: “I’ve committed myself to this fight for the right to vote and preserving our democracy in America. We are in really the final hours of this fight, and there’s not much time left for us, and I want to make sure I’m giving this 100% of my focus and my effort.”

Politico: “Interviews with more than three dozen Democratic elected officials, party operatives and voting rights activists across the country reveal growing concern — bordering on alarm — about the potential impact in 2022 of the raft of new laws passed by Republican legislatures, particularly in some of the nation’s most competitive battleground states.”

“Democratic efforts to model midterm turnout under the new laws remain in their infancy. But even without a sophisticated understanding of the practical effect, there is widespread fear that the party isn’t doing enough to counter these efforts, or preparing for an election conducted under, in some instances, a dramatically different set of rules governing voter access.”

He also threw cold water on supporting Ducey in a possible 2022 Senate campaign: “He’s not getting my endorsement, I can tell you.”

Los Angeles Times: “Since leaving the White House, he has issued a spate of endorsements of House and Senate candidates for next year’s crucial midterm election, including an array of political outsiders, conspiracy theorists and others who — like Trump himself — break the traditional mold.”

“While most former presidents have steered clear of politics, Trump is intervening in Republican primaries like an old-style ward boss: rewarding allies, punishing enemies and trying to use his vast popularity among Republican voters to keep himself and his agenda at the center of the GOP.”

The anti-tax Club For Growth’s newest spot for Tuesday’s all-GOP special argues that state Rep. Jake Ellzey has missed numerous votes in the legislature during his seven months in office because he’s “so busy trying to get to Congress.” The narrator continues, “When Ellzey did show up, he broke his word and voted for a tax hike.”

PENNSYLVANIA GOVERNOR — Charlie Gerow, a Republican who announced his candidacy for Pennsylvania governor last month, said that he is cooperating with a police investigation into an accident in which a motorcyclist was killed, and that shut down the Pennsylvania Turnpike for seven hours, WPXI reports.  But he insists he did not cause the accident.   Gerow apparently drove for several miles with the motorcycle stuck to the front of his car.

They are not sending their best, folks.

OHIO U.S. SENATOR — Josh Mandel is staking his bid for Senate in Ohio in a wide-open Republican primary field “on a Trump-aligned brand of cultural conservatism heavily focused on religion,” the Washington Examiner reports.

“Instead of building his campaign through traditional Republican Party groups, he is turning to churches, holding Faith and Freedom town halls and organizing through meetings with pastors.”

Said Mandel: “I believe we need a Judeo-Christian revolution in this country.”

VIRGINIA GOVERNOR — Richmond Times-Dispatch: “Youngkin has so far declined to complete a candidate questionnaire issued by the advocacy group, which asks candidates questions on topics like banning assault weapons and limiting handgun purchases. Traditionally, the survey has been considered part of the NRA’s endorsement process, which, among other things, includes promotion among its grassroots network.”

“Youngkin frequently talks about his support for the Second Amendment during campaign stops, and during an April appearance he described himself as a ‘lifetime member of the NRA.’”

GEORGIA U.S. SENATOR — The Associated Press reported Friday that Cindy Grossman, the ex-wife of former NFL football star Herschel Walker, secured a restraining order against him in 2005 for allegedly threatening to kill her and her boyfriend. Donald Trump has spent months trying to recruit Walker to challenge Democratic Sen. Raphael Warnock, though Walker has yet to reveal his plans.

Grossman had filed for divorce in 2001 for what she called “physically abusive and extremely threatening behavior” from Walker. She went on to seek a protection order from a judge four years later in Texas, where they both lived, which included an affidavit from her sister, Maria Tsettos, detailing Walker’s alleged threats. Tsettos wrote that the former football player had called her and “stated unequivocally that he was going to shoot my sister Cindy and her boyfriend in the head.” She added that Walker informed her a short time later that he’d purchased a firearm and planned to carry out his threat.

Grosman told the court that Walker had confronted her later that day, saying he “slowly drove by in his vehicle, pointed his finger at (her) and traced (her) with his finger as he drove.” Records obtained by the AP say that the police spoke with Walker, who denied threatening his former wife. The AP story says that Tsettos’ account “was concerning enough to police that they took for ‘safe keeping’ a gun Walker had on the floor of his car.” A judge went on to both issue the protective order Grossman sought and temporarily forbade Walker from possessing any guns.

Walker previously wrote about his struggle with mental illness in a 2008 book, which included a 2001 story describing how he’d furiously hunted for a man who was late delivering a car. “The logical side of me knew that what I was thinking of doing to this man—murdering him for messing up my schedule—wasn’t a viable alternative,” wrote Walker, “But another side of me was so angry that all I could think was how satisfying it would feel to step out of the car, pull out the gun, slip off the safety, and squeeze the trigger.” Walker said that he ended his search after seeing a bumper sticker reading, “SMILE. JESUS LOVES YOU” and soon found professional help.

After the publication of Walker’s book, Grossman told ABC News that on one occasion, Walker put a gun to her head and said, “I’m going to blow your f-ing brains out.”

FLORIDA GOVERNOR — Rep. Al Lawson didn’t quite rule out a bid for governor back in February, but now he’s endorsed fellow Democratic Rep. Charlie Crist for the job, so we can dial him out of this one.

MARYLAND GOVERNOR — Former RNC chair Michael Steele and 2020 Biden supporter announced Thursday that he was forming an exploratory committee for a possible campaign for the GOP nod, but his team isn’t entirely closing the door on the idea that Steele could run as an independent instead. When the Washington Post asked strategist Jim Dornan about this speculation, he replied, “[T]hat is not our intention at this time.” Dornan, though, still insisted that Steele, who previously served as lieutenant governor and as the GOP’s 2006 Senate nominee, is still a “strong conservative” and a Republican.

NEBRASKA GOVENROR — Former Republican Gov. Dave Heineman, who confirmed last month that he’s looking at a comeback bid, now says he’ll “take most of the rest of the summer and the fall” to decide whether he wants to seek his old job.

OHIO 11TH CD — A new poll from the group Democratic Majority for Israel, which has been spending heavily on behalf of Cuyahoga County Councilwoman Shontel Brown, now finds her trailing former state Sen. Nina Turner by a 41-36 margin. A memo from pollster Mark Mellman (who also chairs DMFI) also includes previously unreleased trendlines that show Brown making up much of a considerable gap that stood at 50-26 last month.

With the Aug. 3 special election primary just over a week away, though, there’s not much time left for Brown to catch up the rest of the way—if indeed DMFI’s polling is accurate in the first place. (Brown’s internal polls, for what it’s worth, have shown a similar trajectory, while Turner hasn’t released any survey data since May.) Mellman also acknowledges that “putting Shontel Brown over the top will require substantial resources and a sustained communications effort through Election Day,” another area where she’s lagged.

Brown just reported bringing in a considerable $1.4 million between April 1 and July 14, but Turner raised far more—$2.3 million—during the same timeframe. (The normal quarterly reporting period was extended because of how close the usual deadline would have been to the special election, to avoid requiring candidates to file multiple reports.)

Turner also outspent Brown, $2.8 million to $1.6 million, and had a $645,000 to $355,000 advantage in cash-on-hand for the stretch run. DMFI has partly made up that gap, spending $941,000 so far on ads both boosting Brown and attacking Turner, while a trio of groups (including the Congressional Progressive Caucus and the Working Families Party) has put in $516,000 in support of Turner.

OHIO 15TH CD — Campaign fundraising reports are in for the Aug. 3 GOP primary covering the period from April 1 to July 14, and we have the totals for each notable candidate below:

Donald Trump is backing Carey, the candidate who raised the most money from donors, but some other contenders have also earned some high-profile support. Most notably, Steve Stivers, whose resignation from the House set off this special election, has backed LaRe, and the former congressman’s campaign committee has also aired ads on his behalf.

In addition, Protect Freedom PAC, which is run by allies of Kentucky Sen. Rand Paul, has deployed about $640,000 to aid Hood, while the Club for Growth has spent about $150,000 on mailers going after Kunze, LaRe, and Peterson. Peterson, meanwhile, has the backing of the prominent anti-abortion group Ohio Right to Life, though it doesn’t appear to have spent anything to help him yet.

Unsurprisingly, things are far quieter on the Democratic side in this conservative seat. State Rep. Allison Russo raised $275,000 and had $195,000 on-hand in mid-July, while Army veteran Greg Betts hauled in less than $10,000.

ARKANSAS GOVERNOR — Sarah Huckabee Sanders (R), who is running for governor of Arkansas, makes the case for getting vaccinated in an Arkansas Democrat-Gazette op-ed.