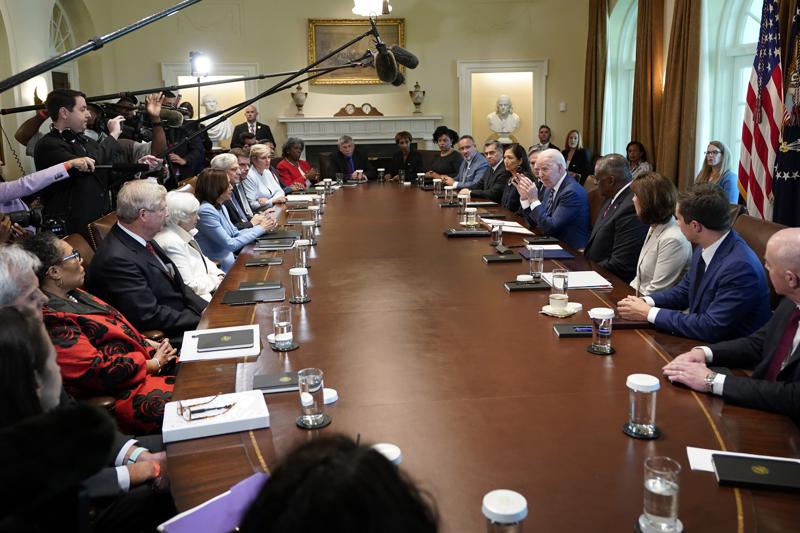 Punchbowl News: “Next week will be decisive for the bipartisan infrastructure group. They have to wrap up their negotiations and get text of a bill out. Or they have to say it was fun while it lasted and pull the plug on this effort. This is what we’re hearing from senators, aides and K Street sources close to the talks.”

“It’s kind of a ‘Death or Glory’ moment, in our view. They’re working frantically, they’re so close to a deal, but it could still all fall apart. Right now, we’re still on the glory side. But it’s like 51% glory, 49% death. It could go either way.”

“A key Republican in the bipartisan Senate group working on a $579 billion infrastructure package said disagreements over transit funding and revenue sources that have held up a deal should be settled and legislative language agreed to by early next week,” Bloomberg reports.

Said Sen. bill Cassidy (R-LA): “We’re working through today and through the weekend. We hope to have language either by Monday or by early next week.”

New York Times: “A plan by Democrats to pay for infrastructure investments by beefing up the Internal Revenue Service to catch tax evaders has resurfaced old resentments for Republicans, whose distrust of the agency has simmered for years, erasing hopes of a bipartisan legislative accord built on narrowing the so-called tax gap.”

Politico: “When Republicans have used dynamic scoring in the past, Bernie Sanders called it a ‘gimmick.’ Democratic leaders are relying on that murky budget tactic to shrink the official cost of a $3.5 trillion plan to enact President Joe Biden’s most liberal commitments without Republican support.”

“The hypocrisy is not lost on Republicans.”

“Under the gambit, budget forecasters estimate how much a policy change might boost the economy and send more cash flowing to the federal government. This time, Democrats are pinning their revenue hopes on the idea that major investments in the social safety net, climate policy and tax reform will yield robust, long-term economic growth.”

“Senior officials now say they expect that people who are 65 and older or who have compromised immune systems will most likely need a third shot from Pfizer-BioNTech or Moderna, two vaccines based on the same technology that have been used to inoculate the vast majority of Americans thus far. That is a sharp shift from just a few weeks ago, when the administration said it thought there was not enough evidence to back boosters yet.”

“The Biden administration purchased an additional 200 million doses of Pfizer-BioNTech’s Covid-19 vaccine to prepare for potential additional vaccine needs in the US,” CNN reports.

“Despite the slowing demand for Covid-19 vaccines, the administration official said the additional shots would be needed for children under 12, pending approval from the US Food and Drug Administration, and the possibility of booster shots for vaccinated individuals.”

“Seven months after the first coronavirus shots were rolled out, vaccinated Americans — including government, business and health leaders — are growing frustrated that tens of millions of people are still refusing to get them, endangering themselves and their communities and fueling the virus’s spread,” the Washington Post reports.

“As U.S. regulators weigh giving the final stamp of approval for certain COVID-19 vaccines, governors in states hard hit by the pandemic hope the move will help persuade the many holdouts in their states to finally get the shot,” the Associated Press reports.

Alabama Gov. Kay Ivey (R) called out “the unvaccinated folks” for the rise in Covid-19 cases in her state, a remarkable plea at a time when many GOP leaders are refusing to urge people to get vaccinated even as Covid-19 cases surge in many parts of the country, CNN reports.

“While some Republicans may be using strong words to promote the vaccine, few are proposing new measures to urge vaccination, such as incentives, public information campaigns or more aggressive outreach,” the Associated Press reports.

Said New Hampshire Gov. Chris Sununu (R): “Right now, it’s folks’ individual responsibility. If someone hasn’t been vaccinated at this point, they’ve made that conscious decision not to.”

Fareed Zakaria: “There is one striking thing that distinguishes this pandemic from all previous ones in history — the speed with which humankind came up with a vaccine. It is unprecedented and still breathtaking that, within months of the arrival of a novel coronavirus, scientists were able to develop and test several vaccines that proved to be highly effective at preventing serious illness.”

“But what science has given, politics seems to be taking away. Despite having ample supplies of the vaccine, the United States is stuck with roughly 60 percent of the adult population fully vaccinated, ensuring that the pandemic will linger, perhaps forever. Given the tools to end this tragedy, we are choosing to live with it.”

“As the Economist points out, the anti-vax movement in America today is unprecedented.”

A new AP-NORC poll of American adults who have not yet received a vaccine finds 35% say they probably will not, and 45% say they definitely will not.

Just 3% say they definitely will get the shots, though another 16% say they probably will.

Key takeaway: “What’s more, 64% of unvaccinated Americans have little to no confidence the shots are effective against variants — including the delta variant that officials say is responsible for 83% of new cases in the U.S. — despite evidence that they offer strong protection.”

“Amid a ‘pandemic of the unvaccinated,’ more than 40% of the nation’s nursing home and long-term health care workers have yet to receive vaccinations,”  ProPublica reports.

Tennessean: “The Tennessee state government will resume all forms of vaccine outreach, with the narrow exception of social media posts aimed specifically at children, after halting many forms of vaccine advocacy this month in response to conservative political pressure.”

Sean Hannity backed away from his seeming embrace of vaccines earlier this week: “I never told anyone to get a vaccine. I have been very clear. I am simply not qualified.”

He added: “I am not a medical doctor. I know nothing about your medical history or your current medical condition. I think it’s inappropriate for me to do so. Instead, for over a year now I have been warning my viewers, you make my career possible.”

John Culhane: “Although the network has recently sounded a more responsible note, that turnabout has by no means been across the entire network and it comes too late for an untold number of people who have been newly sickened or died from the disease, and who might have been saved through immunization.”

“There may actually be some legal remedy, though, for the damage wrought by the network. COVID victims who were taken in by Carlson’s vaccination misinformation, or their estates, may be able to sue Fox News under the ancient common law theory of fraud. They would have a reasonably good chance of success, too.”

David Frum: “Compassion should always be the first reaction to vaccine hesitation. Maybe some unvaccinated people have trouble getting time off work to deal with side effects, maybe they are disorganized, maybe they are just irrationally anxious. But there’s no getting around the truth that some considerable number of the unvaccinated are also behaving willfully and spitefully.”

“Yes, they have been deceived and manipulated by garbage TV, toxic Facebook content, and craven or crazy politicians. But these are the same people who keep talking about ‘personal responsibility.’ In the end, the unvaccinated person himself or herself has decided to inflict a preventable and unjustifiable harm upon family, friends, neighbors, community, country, and planet.”

“Will Blue America ever decide it’s had enough of being put medically at risk by people and places whose bills it pays? Check yourself: Have you?”

“A new Civilian Climate Corps has become a central progressive demand for the Democrats’ budget reconciliation package, and party leaders seem poised to go along,” the Wall Street Journal reports.

“Climate groups and elected officials alike see it as a combination of several top priorities: a tangible response to climate change, a broad-based jobs program aimed especially at young people and people of color, and a test case for Franklin Delano Roosevelt-style populism that President Biden is so eagerly trying to emulate.”

Wall Street Journal: “State and local governments are struggling to distribute $47 billion in federal money aimed at helping tenants who can’t pay rent because of the Covid-19 crisis, leaving many people at risk of being thrown out of their homes when an eviction moratorium expires on July 31.”

“Meanwhile, many landlords have been squeezed because they have been unable to collect rent but remain on the hook for taxes, maintenance and other bills. Problems distributing the funds—which can be used to cover back rent, future rent and utilities—often stem from bureaucratic bottlenecks.”

Related from Bloomberg: “Enhanced assistance will be provided to homeowners with government-backed mortgages who have been negatively impacted by the pandemic, with the aim cutting some monthly payments by roughly 25%.”

“Politics often creates unlikely alliances, the odd-couple arrangements between would-be foes who drop their differences to engage on a common cause,” the AP reports.

“But the emerging partnership between Pelosi and Cheney is remarkable, if not astonishing, as the longtime political adversaries join forces to investigate what happened the day former President Donald Trump’s supporters stormed the Capitol.”

“Rarely has there been a meeting of the minds like this — two of the strongest women on Capitol Hill, partisans at opposite ends of the political divide — bonding over a shared belief that the truth about the insurrection should come out and those responsible held accountable. They believe no less than the functioning of America’s democracy is on the line.”

Jeffrey Toobin: “Thomas, who was confirmed in 1991, is now the longest tenured Justice on the court. More notably, he is now the leading figure among the five solid conservatives on the court.”

“In crucial, contested cases, Chief Justice Roberts has increasingly been voting with the three remaining liberals — Stephen Breyer, Sonia Sotomayor and Elena Kagan. If Roberts continues this pattern, that means Thomas will be the senior Justice in several significant 5 to 4 cases and thus enjoy the right to assign majority opinions, including, of course, to himself.”

“North Korea’s food shortages have reached crisis levels, and inequalities have sharply widened ever since the COVID-19 pandemic forced the country to close its borders in January last year,” Nikkei Asia reports.  “The reclusive nation will be short by about 860,000 tons of food this year, or about two months of normal demand.”

CNN: “The Department of Defense inspector general is launching a review of the Pentagon’s and White House’s ability to keep the ‘nuclear football’ secure during a crisis, following an incident on January 6 when rioters came within 100 feet of the backup ‘football.’”

“The inspector general will evaluate the policies and procedures around the Presidential Emergency Satchel, also known as the ‘nuclear football,’ in the event that it is ‘lost, stolen, or compromised,’ according to an announcement from the DoD IG’s office.”

“China and the U.S. are shipping goods to each other at the briskest pace in years, making the world’s largest bilateral trade relationship look as if the protracted tariff war and pandemic never happened,” Bloomberg reports.

“Eighteen months after the Trump administration signed the trade deal, the agreement has turned out to be a truce at best. The U.S. trade deficit hasn’t shrunk, most levies are still in place, and it hasn’t led to negotiations over other economic issues.”

“The order, which reaffirmed some policies of previous administrations, marks a sharp pivot from the Trump era when the former president casually broke with institutional norms, repeatedly calling on the department to launch investigations of his political rivals, including Biden, Hillary Clinton and former FBI Director James Comey.”