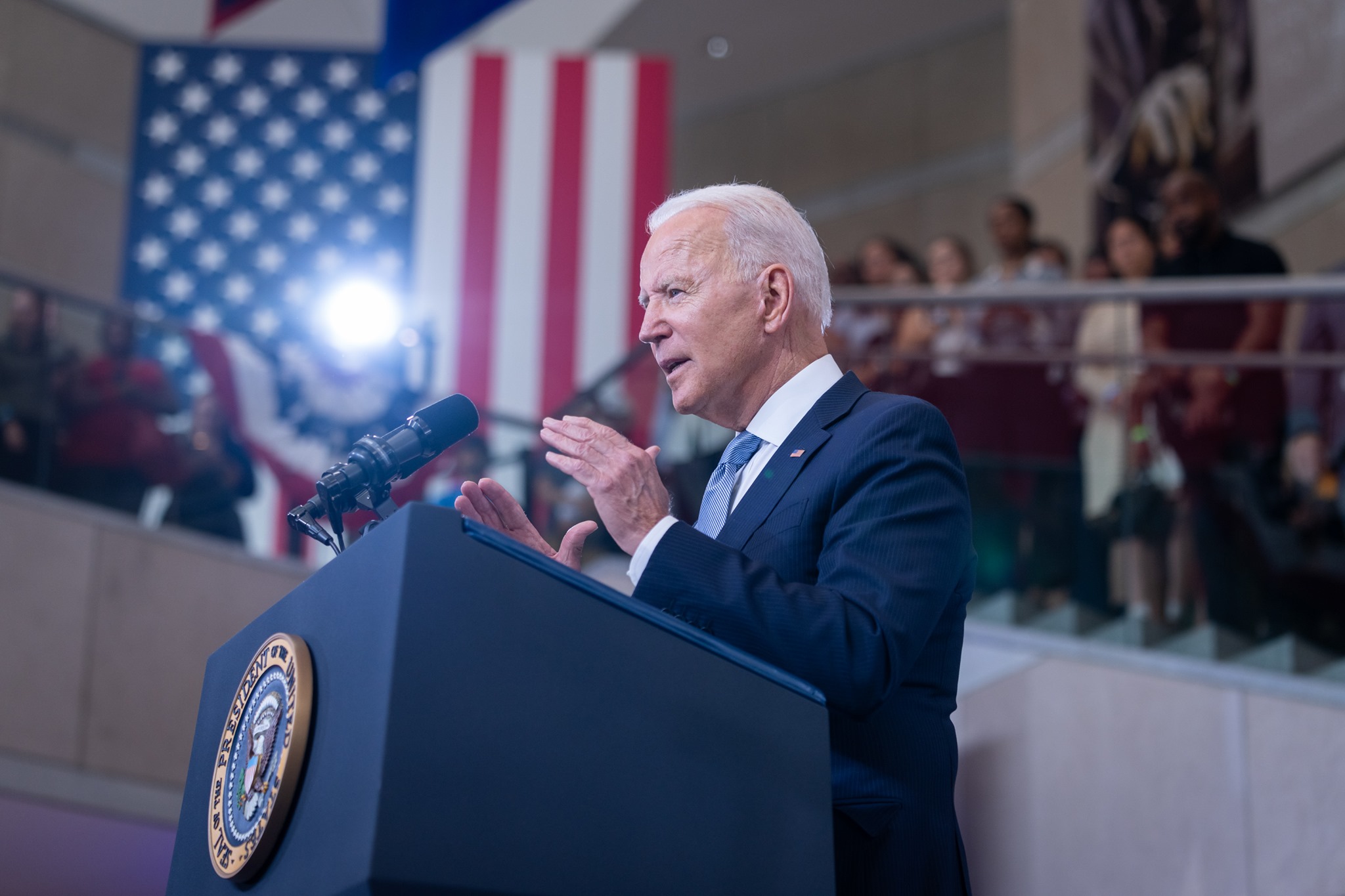 “Senate Majority Leader Chuck Schumer has yet to indicate when exactly he’ll move forward on the $3.5 trillion price tag that fellow Democrats have backed for a party-line plan to tackle prized liberal priorities, from health care to climate change,” Politico reports.

“But as bipartisan talks on a separate, smaller infrastructure bill remain in flux, liberal Democrats in both chambers are already signaling that the bigger bill’s top line will need to increase if a cross-aisle deal falls apart. Not every Democrat agrees: Some centrists are flatly rejecting the idea of adding even a single more dollar to the party’s already-hefty plan that’s on tap to pass without GOP votes through what’s known as budget reconciliation.”

Politico: “If a deal on the massive bill materializes next week, as several senators involved in talks are suggesting, it would represent the most significant validation to date of President Joe Biden’s commitment to bipartisanship. It would also support his claims that he possesses a unique congressional acumen.”

“Though he argued on Wednesday that it was working — ‘that’s all beginning to move,’ he said — many in his party warn that it could be a waste of time and capital. … The White House’s zealous pursuit of a bipartisan deal was kept alive, in no small part, due to the team of top advisers Biden installed to help work toward an agreement.”

Speaker Nancy Pelosi said that her decision not to allow Reps. Jim Jordan (R-OH) and Jim Banks (R-IN) to serve on the Jan. 6 select committee was not driven by their votes against certifying the 2020 election, but by statements they’ve made that “make it impossible for them to exercise judgment,” Axios reports.

Playbook: “If Pelosi gave McCarthy a gift for his own base Wednesday, McCarthy handed the speaker one in return for hers: His announcement that he would withdraw all his members from the panel unless she reverses course is exactly what a lot of Democrats were hoping for.”

“Now, Democrats (plus Rep. Liz Cheney) can subpoena whomever they want, whenever they want, without any protest. If they decide to have closed-door depositions with Trump White House officials, the former president will have no spies in the room to report back. And the public hearings will be free of GOP complaints. In that regard, perhaps, Pelosi may say the move was worth it.”

Jonathan Bernstein: “To pick on one pundit, CNN’s Chris Cillizza immediately declared that Pelosi’s decision ‘dooms even the possibility of the committee’s eventual findings being seen as independent.’”

“But ‘being seen as independent’ isn’t the same thing as coming up with accurate findings, which seems like a more important standard to set — and one that is by no means undermined by restricting the committee to those who sincerely want to get to the truth. The success or failure of the committee will mostly depend on whether it’s able to access the information it needs, and not on spin or interpretation.”

Punchbowl News: “The level of absolute disdain for Rep. Liz Cheney (R-WY) in the House Republican Conference is truly something we’ve never seen before. It drips from Republicans in every sentence they utter about Cheney.”

“So we wondered why don’t House Republicans do something about it? Why not expel Cheney from the House Republican Conference, or strip her of her committee assignments or endorse a primary opponent?”

“President Biden on Wednesday night defended the filibuster, a procedural tactic that stands to hold up much of his agenda in the Senate, even as he reiterated that he viewed it as a relic of Jim Crow,” the New York Times reports.

Said Biden: “There’s no reason to protect it other than you’re going to throw the entire Congress into chaos and nothing will get done. Nothing at all will get done.”

President Biden jabbed at Fox News saying the network had “an altar call” over stepping up messaging on getting vaccinated against COVID-19, Axios reports.

The White House released a 23-page slide deck on how President Biden and his cabinet hope to sell the American public on his economic plans.

“The Biden administration is accelerating investments in Covid-19 testing to combat a fourth wave of infections washing over states and regions with low vaccination rates as those rates stall and some people resist a return to mask mandates,” NBC News reports.

“Top White House aides and Biden administration officials are debating whether they should urge vaccinated Americans to wear masks in more settings as the delta variant causes spikes in coronavirus infections across the country,” the Washington Post reports.

“The talks are in a preliminary phase and their result could be as simple as new messaging from top White House officials. But some of the talks include officials at the Centers for Disease Control and Prevention who are separately examining whether to update their masking guidance.”

Associated Press: “Across the U.S., the seven-day rolling average for daily new cases rose over the past two weeks to more than 37,000 on Tuesday, up from less than 13,700 on July 6… Health officials blame the delta variant and slowing vaccination rates. Just 56.2% of Americans have gotten at least one dose of the vaccine, according to the CDC.”

Nature: “Researchers might now know why Delta has been so successful: people infected with it produce far more virus than do those infected with the original version of SARS-CoV-2, making it very easy to spread.”

“Individuals infected with Delta also had viral loads up to 1,260 times higher than those in people infected with the original strain.”

But good news from the New England Journal of Medicine: Two doses of Pfizer or AstraZeneca’s COVID-19 vaccine are nearly as effective against the delta variant as they are against the previously dominant alpha variant.

NYPD uniformed and civilian workforce significantly lags the city’s rate of vaccination. An NYPD spokesperson told the New York Post that 43% of the agency’s workforce has been vaccinated. The city’s rate is 53%. Obviously not all city cops live in New York City. But the vaccination rate in the state overall is even higher – 56%.

“Some anti-vaccination groups on Facebook are changing their names to euphemisms like ‘Dance Party’ or ‘Dinner Party,’ and using code words to fit those themes in order to skirt bans from Facebook, as the company attempts to crack down on misinformation about Covid-19 vaccines,” NBC News reports.

“The groups, which are largely private and unsearchable but retain large user bases accrued during the years Facebook permitted anti-vaccination content, also swap out language to fit the new themes and provide code legends.”

Punchbowl News: “Nearly a month after GOP and Democratic negotiators said they’d reached an ‘agreement on a framework addressing the major issues,’ the discussions have stalled out, according to the sources we spoke to on Wednesday.”

“Sens. Cory Booker (D-NJ) and Tim Scott (R-SC) haven’t made any breakthroughs, despite positive public comments from both. The news coverage has also dwindled. Much more of the focus now is on rising crime rates, not fixing policing, and the politics look to have shifted as well.”

“One source close to the issue said the talks are on life support, and the ventilator isn’t working.”

California Gov. Gavin Newsom (D) and state lawmakers “quietly approved the funds weeks ago, and the money has stayed under the radar ahead of a pivotal Oakland City Council vote Tuesday on the stadium’s future — a decision that the A’s and Major League Baseball insist could determine whether the team remains after 53 years in the city,” Politico reports.

Sen. Lindsey Graham (R-SC) told Fox News that a Democratic proposal to grant amnesty to undocumented immigrants as part of the infrastructure proposal “is the dumbest idea in the history of the Senate, the history of the White House.”  He added: “It will lead to the breakdown of law and order beyond what you see today.”

Washington Post: “Allan Weisselberg had been one of two trustees at the trust that owns and controls former president Trump’s company. But Weisselberg gave up that post, and dozens of others at Trump subsidiaries, after he was charged with running a tax-fraud scheme inside the company.”

“Weisselberg still works at the company… But his resignation from those formal posts means that the company’s already small executive ranks have shrunk even further, at a time when the company faces a raft of financial and legal problems.”

Gen. Mark Milley, chairman of the Joint Chiefs of Staff, said that the Taliban appear to have “strategic momentum” in the fight for control of Afghanistan as they put increasing pressure on key cities, setting the stage for a decisive period in coming weeks as American forces complete their withdrawal, the AP reports.