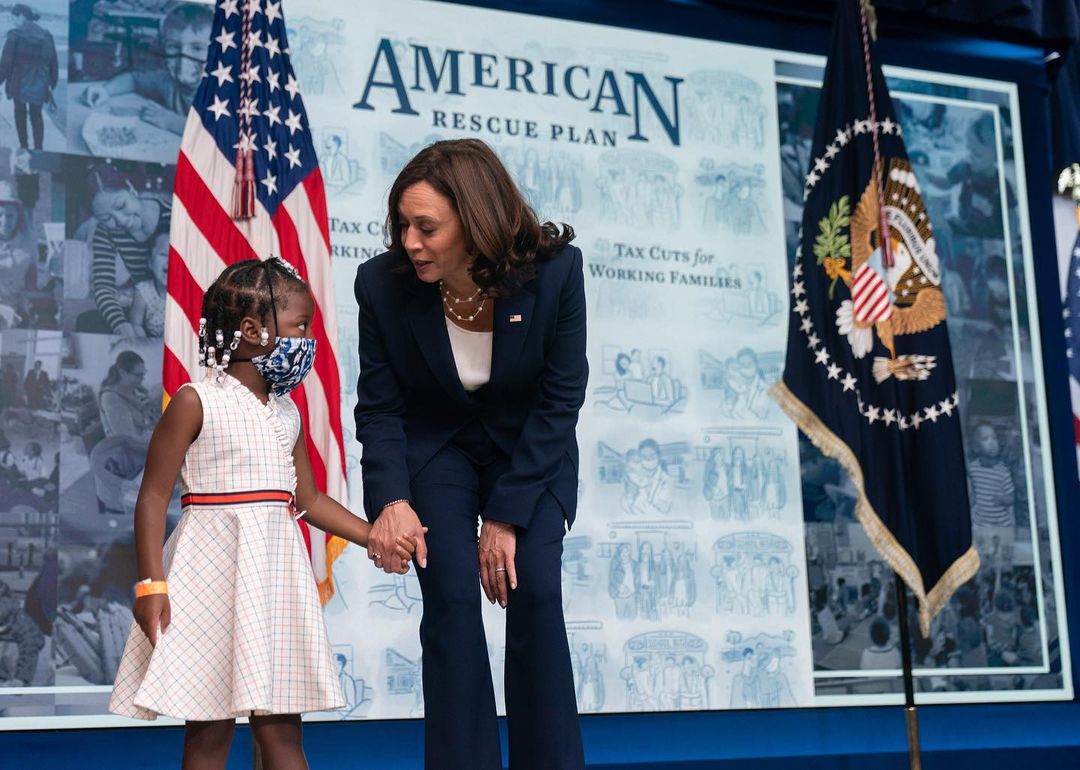 A new CBS News/YouGov poll finds that only 27% surveyed want voting made harder, with 38% wanting it made easier and 35% wanting no changes.

A new Axios/Ipsos poll finds most Americans who still aren’t vaccinated say nothing — not their own doctor administering it, a favorite celebrity’s endorsement or even paid time off — is likely to make them get the shot.

A new Gallup poll finds net confidence in big business among Republican voters is down 30 points from last year, steady among independents, and although still negative overall, up 12 points for Democrats.

ALASKA U.S. SENATOR — Incumbent Lisa Murkowski outpaced former state cabinet official Kelly Tshibaka $1.1 million to $545,000. The senator, who has not yet confirmed if she’ll run again, also ended June with a wide $2.3 million to $275,000 cash-on-hand edge. Murkowski famously lost the 2010 nomination only to win in the fall as a write-in candidate, but the Last Frontier voted last year to do away with partisan primaries and instead institute the new top-four system.

ALABAMA U.S. SENATOR — The GOP primary in Alabama, meanwhile, pits Trump-endorsed Rep. Mo Brooks against ex-Business Council of Alabama head Katie Boyd Britt, a former chief of staff to retiring Sen. Richard Shelby who has her old boss’ backing; a few other candidates are running as well. Britt entered the race in June and quickly hauled in $2.2 million compared to $820,000 for Brooks. And while Brooks, who helped foment the Jan. 6 assault on the Capitol, enjoyed a big fundraising head start thanks to his April launch and his ability to transfer funds from his House account to his Senate campaign, it’s Britt who enjoys a $2.2 million to $1.7 million cash-on-hand lead.

Britt’s strong opening quarter wasn’t a huge surprise given her extensive connections in the state’s business circles. CNN also reported in late May, just before she launched her campaign, that some unnamed Republicans feared that Brooks would be “an unreliable ally to the business community” and saw Britt as a good alternative.

Both contenders, though, have far less money than former Ambassador to Slovenia Lynda Blanchard, who has been self-funding most of her campaign. While Blanchard hauled in just $190,000 from donors from April to June, she’s sitting on $5.2 million. Another Republican, businesswoman Jessica Taylor, entered the race in July after the new fundraising quarter began. A runoff would take place if no one takes a majority of the vote in the first round of the primary, and the GOP nominee will be the heavy favorite to prevail in the general election.

Trump, for his part, is doing what he can to make sure that Brooks’ underwhelming fundraising doesn’t stop him from being that nominee. Earlier this month, he put out a not-Tweet slamming Britt and Shelby, who has been an ardent Trump ally, with the venom he usually only reserves for the likes of Murkowski and other politicians who have crossed him. “I see that the RINO Senator from Alabama, close friend of Old Crow Mitch McConnell, Richard Shelby, is pushing hard to have his ‘assistant’ fight the great Mo Brooks for his Senate seat,” Trump declared, adding, “She is not in any way qualified and is certainly not what our Country needs or not what Alabama wants.”

Britt responded, “I don’t need anyone else to fight my battles, and as Alabama’s next U.S. Senator, I won’t be a rubber stamp for anyone.” Trump has yet to publicly attack either Blanchard or Taylor.

NORTH CAROLINA U.S. SENATOR — Another Trump-backed congressman, Ted Budd, got swamped in the money race by former Gov. Pat McCrory. McCrory outpaced Budd $1.2 million to $700,000, though Budd self-funded an additional $250,000. Unlike Brooks, though, Budd’s pre-existing war chest left him with a $1.7 million to $955,000 cash-on-hand lead over the former governor. Another Republican candidate, former Rep. Mark Walker, wasn’t in such good shape, however: Walker raised a mere $190,000 for the quarter, and he had $925,000 in the bank.

The top fundraiser in this quarter wasn’t any of the Republicans, though. Former state Supreme Court Chief Justice Cheri Beasley finished just ahead of McCrory by bringing in $1.3 million during her first months in the contest, and she ended it with $835,000 on-hand.

State Sen. Jeff Jackson, who launched his campaign in January, brought in a smaller $720,000 this time, though his $865,000 war chest was slightly larger than Beasley’s. Former state Sen. Erica Smith, who lost the 2020 primary, was a distant third for Team Blue with $115,000 raised and $55,000 on-hand, while Beaufort Mayor Rett Newton was even further behind. Primary runoffs only take place in the Tar Heel State if no one takes at least 30% of the vote.

And he said he “bugs” Sen. Ron Johnson (R-WI) daily about committing to running for reelection in 2022.

OKLAHOMA U.S. SENATOR — Republican Sen. James Lankford learned over the last few days both that he has a massive cash-on-hand edge over his intra-party rival, pastor Jackson Lahmeyer, and that he wouldn’t be getting censured by the state party.

Lahmeyer’s longshot campaign earned some attention a few weeks ago when party chair John Bennett announced that he was backing the challenger because of Lankford’s refusal to object to certifying Joe Biden’s electoral college majority in the hours after the Jan. 6 attack. That declaration came just before the conclusion of the second quarter, which saw the incumbent outraise Lahmeyer $780,000 to $210,000; Lankford also ended June with a $1.6 million to $135,000 cash-on-hand lead.

It remains to be seen if Oklahoma’s conservative base will be open to firing Lankford, but so far, a majority of Bennett’s colleagues at the state’s Republican State Committee aren’t. On Saturday, the body voted 122-93 against censuring both Lankford and fellow Sen. Jim Inhofe for recognizing Biden’s win.

CALIFORNIA GOVERNOR — Candidate filing closed Friday for the Sept. 14 recall election against Democratic Gov. Gavin Newsom, and the secretary of state’s office has a list of contenders available here. As we’ll discuss, though, one notable Republican, conservative radio host Larry Elder, is disputing his omission from the document and has indicated he would sue to make the ballot.

Voters will be presented with two separate questions on the September ballot. The first will ask whether Newsom should be recalled, while the second will ask them to pick among the candidates vying to succeed him. The results of the second question will only matter if a majority vote “yes” on the first question; should this happen, the replacement candidate who wins a plurality of the vote will become California’s new governor.

Newsom’s party affiliation will not be listed on the ballot because his legal team didn’t turn in required paperwork on time last year, though the replacement candidates will be identified by party. Polls have generally shown the recall question failing, though no numbers have been released since the election was scheduled early this month.

A total of 41 candidates have qualified for the ballot (there is no primary or general election here) which means that this field, while large, is nonetheless far smaller than the 135-person contest from 2003. And while Republican Arnold Schwarzenegger dominated the race 18 years ago when voters opted to recall Democratic Gov. Gray Davis, there is no clear front runner on the GOP side this time. The notable contenders are:

Jenner’s campaign announced Friday that she had flown to Australia to take part in the filming of the TV show Big Brother VIP, though the candidate insisted she was still running.

One Republican who was not listed, though, was the aforementioned Elder, who is a regular Fox News guest. Election officials told him over the weekend that he hadn’t submitted legally-required information about his tax history, though it’s not clear yet what he didn’t include. Elder shared the secretary of state’s letter on Twitter on Sunday and added, “See you in court.”

Another key difference from the state’s last recall campaign is that, while eight Democrats filed to replace Newsom, none of them appear to be capable of running serious campaigns. That’s welcome news for the governor and his allies, who strongly discouraged big-name contenders from getting in so they could avoid a repeat of the 2003 debacle.

In that race, Democrats rallied around Lt. Gov. Cruz Bustamante as their backup choice in case the recall succeeded with the awkward slogan of “no on recall, yes on Bustamante.” That position became even more precarious when Bustamante started to criticize Davis in the evident hope that the recall would succeed and he’d reap the rewards. (He didn’t.)

ILLINOIS GOVERNOR — Democratic Gov. J.B. Pritzker announced Monday that he would seek a second term in 2022, and so far, none of his would-be Republican foes have raised the type of money they’ll need to have a real chance to take him down in this very blue and very expensive state.

The GOP contender with the largest war chest is state Sen. Darren Bailey, a right-wing extremist who, among other things, was ejected from a House session last year for refusing to wear a face mask. Bailey raised only $165,000 but he still ended June with $490,000 in his campaign fund. Businessman Gary Rabine, who is self-funding much of his bid, hauled in a total of $345,000 and had $285,000 left over. A third candidate, former state Sen. Paul Schimpf, raised just $85,000 and had $115,000 on-hand.

Pritzker, meanwhile, raised only $200,000 but, thanks to a massive personal investment in March, had $32.9 million in the bank. The governor has an estimated net worth of well over $3 billion, and he’s more than capable of throwing down far more money if he wants to.

MAINE GOVERNOR — Democratic Gov. Janet Mills reported raising $575,000 in the first six months of the year. Mills also reported $377,000 in the bank ahead of her re-election effort next year. Her expected GOP opponent, former Gov. Paul LePage, just kicked off his bid in July, so he hasn’t released any fundraising figures yet.

Reeves won his seat by unseating a Democratic incumbent by 226 votes right after the 2011 round of redistricting, a tight win that flipped control of the chamber to the GOP. He then sought a promotion in 2017 when he ran for lieutenant governor, but he lost a truly ugly primary to fellow state Sen. Jill Holtzman Vogel 43-40.

Another state senator, 2021 gubernatorial candidate Amanda Chase, also isn’t ruling out a congressional campaign, but the self-described “Trump in heels” doesn’t sound excited about the idea. Chase, who lost the May party convention for the state’s top job, told the paper, “I’m not even really thinking about it right now.”

VIRGINIA 5TH CD — Lewis Combs stepped down this month as a prosecutor in Charlottesville to announce a bid for the Democratic nomination to take on Republican Rep. Bob Good. The present incarnation of this seat, which stretches from the Charlottesville area to the far more conservative south-central part of Virginia, supported Trump 54-45, though no one knows what will happen after the commonwealth’s new bipartisan redistricting commission completes its task.

MASSACHUSETTS GOVERNOR — While Republican incumbent Charlie Baker’s underwhelming fundraising led plenty of Bay State politicos to speculate that he was leaning against running for re-election, the governor has a major fundraiser planned for later this summer. (The gathering was originally set for Aug. 20 but canceled Friday after University of Massachusetts President Marty Meehan, a former Democratic congressman, was mistakenly listed as part of the host committee; a new event will be scheduled later.) Baker has not yet said if he’ll seek a third term, though one unnamed “inside source” mused to the Boston Herald, “​​He wouldn’t be going if he wasn’t running.”