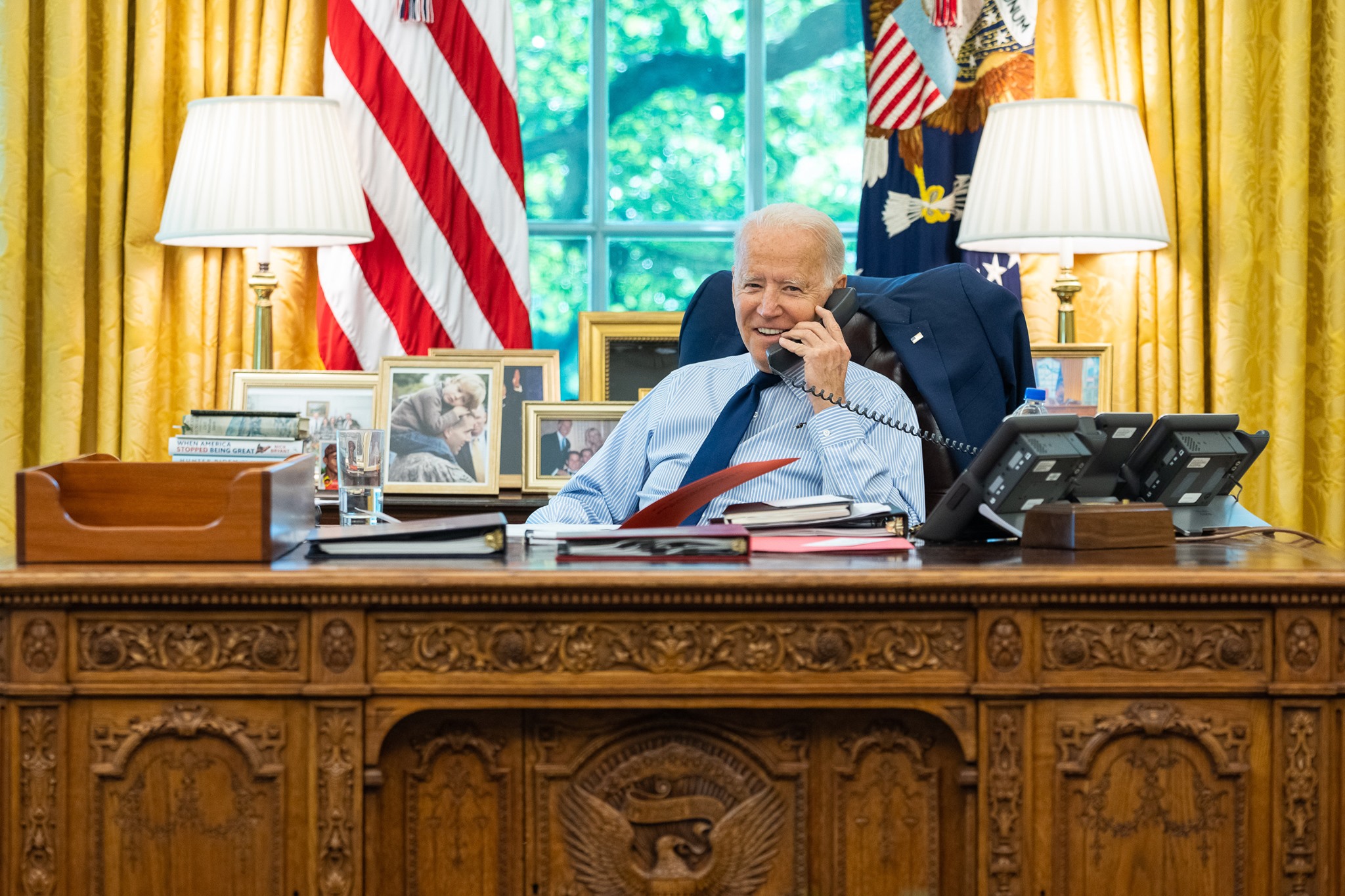 “Barrack, whose primary residence is in Los Angeles, was taken into custody in California and indicted on foreign lobbying charges related to his dealings with the United Arab Emirates.”

“President Biden on Monday took a subtle yet unmistakable dig at Republicans who have backed away from a major funding component in a bipartisan infrastructure package that is now starting to fray, saying pointedly that ‘we shook hands on it’ even as he continued to promote the agreement,” the Washington Post reports.

“Biden’s comment, with its accusatory undertones, reflected the agreement’s precarious state at the outset of what could be a pivotal week. Senate Majority Leader Charles Schumer (D-N.Y.) plans to force a vote within days to advance the roughly $1 trillion plan despite the Republican hesitations, a high-stakes gamble that is intended to force agreement but that GOP senators on Monday warned they would reject.”

“A top House Democrat scorched the Senate’s bipartisan infrastructure negotiations during a private call Monday, saying he hopes the talks fail 48 hours before a high-profile test vote in the upper chamber,” Politico reports.

“Rep. Peter DeFazio (D-OR), who leads the House transportation committee, trashed the bipartisan GOP-negotiated measure in a fiery call with other Democrats, according to three sources on the call.”

Sen. Rob Portman (R-OH) is quoted by the Washington Post: “We’re not going to have a product ready tomorrow for consideration.”

“Instead, the New York Democrat heaped more pressure on senators to reach a final agreement on the legislation, and said he had no plans to delay Wednesday’s up or down vote to proceed with debate on the plan.”

Politico: “The Senate majority leader wanted to explain his thinking in greater detail to the Democrats who’ve labored to cut a nearly $600 billion deal with Republicans, according to two sources familiar with the meeting. He needed to make sure everyone in his tight-knit 50-member caucus was behind him before taking a gamble that could endanger the bipartisan talks he’s spent weeks supporting.”

“Schumer emerged from the meeting confident that his aggressive tactics had buy-in from Democratic Sens. Kyrsten Sinema of Arizona, Jon Tester of Montana, Joe Manchin of West Virginia, Jeanne Shaheen of New Hampshire and Mark Warner of Virginia. Though many Republicans claim Schumer is undercutting the bipartisan talks by forcing a Wednesday vote before negotiations have concluded, his most important swing votes all sided with him behind closed doors before he made a move.”

“President Biden is set to host a celebration with the 2021 Super Bowl champions, the Tampa Bay Buccaneers, on Tuesday morning at the White House, continuing a recent run of celebrations with title-winning athletes,” the New York Times reports.

“Tom Brady, the Tampa quarterback who has missed several presidential team visits after winning previous Super Bowls with the New England Patriots, was in attendance.”

“I think about forty percent of people still don’t think we won, right Mr. President?” — Tom Brady, quoted by the Daily Beast, as the Tampa Bay Buccaneers were honored at the White House by President Biden.

Read this. This is where I am at: the unvaccinated need to be punished severely rather restrict the lives of those who actually acted responsibly and for the common good and got vaccinated.

Said Scalise: “Especially with the delta variant becoming a lot more aggressive and seeing another spike, it was a good time to do it. When you talk to people who run hospitals, in New Orleans or other states, 90% of people in hospital with delta variant have not been vaccinated. That’s another signal the vaccine works.”

Yeah, it’s good that he finally decided once the Delta Variant was running rampant to get vaccinated and its good he said so publicly. But he was manifestly irresponsible every day up until now, promoting anti-vaxx sentiment by refusing to get vaccinated until now.

Fox News host Sean Hannity suddenly urged his viewers last night to “please take Covid seriously.” He added: “I can’t say it enough. Enough people have died. We don’t need any more death. Research like crazy. Talk to your doctor… I believe in science. I believe in the science of vaccination.”

“Fox Corporation, the right-wing talk channel’s parent company, has quietly implemented the concept of a vaccine passport as workers slowly return back to the company’s offices,” CNN reports. “The system allows for employees to self-report to Fox the dates their shots were administered and which vaccines were used. Employees who report their status are allowed to bypass the otherwise required daily health screening.”

A new Annenberg Public Policy Center study finds that people who rely on conservative media have much less confidence in key public health institutions and experts, and are much more likely to believe misinformation about the coronavirus vaccine.

Newsmax CEO Chris Ruddy praised President Biden in an editorial for how he has handled the coronavirus pandemic and urging Americans to get vaccinated against the virus.

Wrote Ruddy: “I heard that in the early days of the administration, Biden himself was on a call discussing the rollout of the vaccine with some at the Centers for Disease Control and Prevention, and others, wanting delays in the rollout. Biden himself would have none of it. He took charge in the call and said there would be no delay.”

He added: “For the moment, we as Americans can applaud President Biden’s success with the vaccine rollout. It is saving countless lives—and that is a good thing.”

Maybe he wants to actually watch what his network is saying about getting vaccinated. Piece of shit. I wonder what has finally forced the hands of Hannity, Ruddy and Scalise. Months of vaccine hostility and suddenly they are all singing a different tune. Were they all visited by the Ghost of Pandemic Past last night?

“Fox News issued a scathing rebuke to reporting from CNN suggesting the network held talks with officials in the White House Communications Office about how the network should cover coronavirus vaccines,” The Hill reports.

House Minority Leader Kevin McCarthy (R-CA) will recommend five Republicans to serve on the select committee investigating the Jan. 6 attack on the Capitol by a pro-Trump mob, the Washington Post reports.

CNN: “Banks was selected to be the ranking Republican, though Jordan is perhaps the most well-known of the five, given his history of clashing with Democrats at high-profile hearings on Capitol Hill.”

“The Democrat-led committee is set to hold its first hearing Tuesday, setting up what could be the first of many partisan brawls over the circumstances behind the violent insurrection.”

Twitter said on Monday that it was suspending Rep. Marjorie Taylor Greene (R-GA) from its service for 12 hours after she posted messages that violated its policy against sharing misleading information about the coronavirus, the New York Times reports.

“The Justice Department is pushing for rule changes that would put a 50-year delay on when courts can consider releasing material from federal grand juries, according to documents and interviews, and would separately allow gag orders to be applied more broadly to witnesses,” the Washington Post reports.

“While the recommendations were made during the Trump administration, President Biden’s Justice Department is still seeking the changes, even as critics oppose what they say would be a significant expansion of secrecy around federal courts and investigations.”

“Grand jury secrecy is a cornerstone of American criminal justice. Much of what is said in grand juries — where citizens, guided by a prosecutor, consider whether to indict someone for alleged crimes — is never made public.”

Jeff Bezos said in an interview hours after flying to suborbital space that there are “no words” to adequately describe the experience, but that it reinforced his commitment to combating climate change and keeping Earth “as this beautiful gem of a planet that it is,” Axios reports.

“Thousands of opioid-crisis lawsuits filed against major drugmakers and distributors are nearing a conclusion, with the outlines of a $26 billion deal between states and four companies expected to be announced this week,” the Wall Street Journal reports.

“We asked him why, as president, he thought it was OK for him to continually tell the American people things that were not true, to lie again and again and again And he said to us, ‘You know, there’s a beautiful word, and it’s called disinformation.’”  — Philip Rucker, quoted by the HuffPost, on interviewing Donald Trump for his new book, I Alone Can Fix It.

“With the spread of COVID-19 on the rise, Gov. Gavin Newsom faces a delicate decision over whether to again impose statewide mask requirements in all indoor public places and risk upsetting Californians just weeks before they decide if he should be recalled from office,” the Los Angeles Times reports.

“In Los Angeles County, home to one out of every four Californians, residents are required to wear masks in those settings whether they are vaccinated or not. Seven San Francisco Bay Area counties last week recommended the use of masks, as did Sacramento and Yolo counties, to help stem the spread of the highly transmissible Delta variant.”

Washington Post: “The administration is closely monitoring the economic risks associated with the delta variant, and senior U.S. officials have in recent days suggested that local restrictions may have to be reimposed in response to the pandemic… Fears are in particular intensifying over whether the delta variant will hurt the global economy.”

“Other leading analysts are also beginning to get nervous. … Even with the renewed concerns, many economists stressed that the U.S. economic growth outlook is stronger than it has been in years.”

Former Sen. Claire McCaskill (D-MO) told the Kansas City Star that she’s not interested in an ambassadorship from President Biden.

“The U.S. economic recession triggered by the COVID-19 pandemic officially ended in April 2020,” Axios reports. That would make it the shortest recession on record.

“The head of the organizing committee for the Tokyo Olympics on Tuesday did not rule out a last-minute cancellation of the global sporting showpiece, amid rising coronavirus cases that have presented organizers with mounting challenges,” CNBC reports.

“Press secretary Jen Psaki on Tuesday confirmed that there have been multiple breakthrough coronavirus cases among White House staffers,” Axios reports.  “She noted that White House staff are all vaccinated and get tested regularly, adding that she gets tested twice a week. President Biden gets tested about every two weeks.”

“India’s excess deaths during the pandemic could be a staggering 10 times the official COVID-19 toll, likely making it modern India’s worst human tragedy,” the AP reports. “Most experts believe India’s official toll of more than 414,000 dead is a vast undercount, but the government has dismissed those concerns as exaggerated and misleading.”

“The report released Tuesday estimated excess deaths — the gap between those recorded and those that would have been expected — to be between 3 million to 4.7 million between January 2020 and June 2021.”