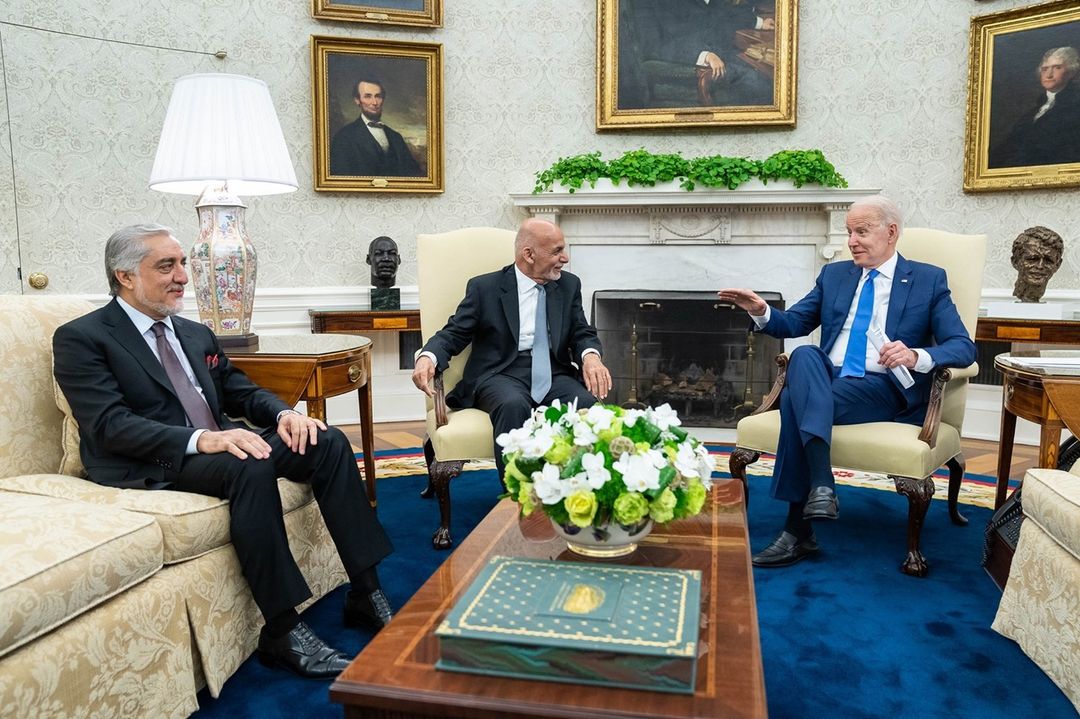 Senate Republicans are signaling they’re not going to agree to move forward on a scaled-down bipartisan infrastructure package if Senate Majority Leader Charles Schumer (D-NY) goes ahead with his plan to force a vote Wednesday, The Hill reports.

Punchbowl News: “It’s fair to say that, at this point, the infrastructure talks between the White House and Senate Republicans aren’t very productive, and there are serious doubts that a deal can come together… there’s virtually no chance a deal will be done by Wednesday at this point.”

“Schumer’s team has made clear the vote the leader has scheduled for Wednesday is solely on the vehicle for moving the measure, not the contents of the bill itself.”

Remember, you don’t need a bill to be written at this stage. The Cloture vote is only a vote to BEGIN debate an issue. So if Republicans vote no, then they were never serious about passing an infrastructure bill in the first place.

“The Senate majority leader is taking a gamble worthy of his predecessor by scheduling two major deadlines this week to force action on President Joe Biden’s agenda. The hardball move is meant to test whether Republicans who say they want bipartisanship mean it — but also to strong-arm his own ideologically diverse caucus into line on the massive, Democrats-only reconciliation bill.”

“President Joe Biden said that disinformation about Covid-19 vaccines on Facebook harms those who believe it, walking back his accusation last week that social media giants are ‘killing people’ by allowing the posts, Bloomberg reports.

Said Biden: “Facebook isn’t killing people These 12 people who are out there giving misinformation, anyone listening to it is getting hurt by it, it’s killing people.”

These 12 online personalities “have a combined following of 59 million people across multiple social media platforms, with Facebook having the largest impact.”

Wall Street Journal: “The administration’s confrontational approach marked a shift for Mr. Biden and his team, which began meeting with social-media companies during the presidential transition in a bid to strengthen protections against misinformation, U.S. officials said. They met with executives including those for Facebook, Twitter, YouTube, Snapchat and Pinterest.”

“But in recent months, the behind-the-scenes discussions with Facebook grew increasingly unproductive, according to the officials, who said they were unsatisfied with the company’s responses to their requests for more information about how it was responding to the influx in misinformation.”

“Convinced that private negotiations had little hope of success, senior Biden administration officials decided to ratchet up public pressure on Facebook this week amid growing concern in the White House with the slowing pace of vaccinations and the spread of the highly transmissible Delta variant.”

“A Florida man who breached the U.S. Senate chamber carrying a Trump campaign flag is scheduled to become the first Jan. 6 rioter sentenced for a felony, in a hearing that will help set a benchmark for punishment in similar cases,” the AP reports.

The Hill reports Paul Allard Hodgkins was sentenced to 8 months in prison on Monday, the first felony sentence imposed on a participant in the attack since January 6.

Exactly. And that makes them all traitors.

Vanity Fair has a behind-the-scenes look at Donald Trump’s hours-long interview with Carol Leonnig and Philip Rucker “from his Mar-a-Lago throne” for their new book, I Alone Can Fix It.

“Trump started the interview by pointing out his enduring and unrivaled power within the Republican Party. He explained that he didn’t intend to follow the path of former presidents, who largely bowed out of the nitty-gritty of party politics. He was proud to say he genuinely enjoys this sport he found so late in life, and believes he plays it better than anyone else. The parade of Republican politicians flocking to Mar-a-Lago all spring to kiss his ring had both energized him, he said, and proved the value of his stock.”

Said Trump: “We have had so many, and so many are coming in. It’s been pretty amazing. You see the numbers. They need the endorsement. I don’t say this in a braggadocious way, but if they don’t get the endorsement, they don’t win.”

Before he was killed, Haiti President Jovenel Moïse spent 10 minutes desperately trying to summon security for help — but his security staff didn’t respond to his frantic pleas, the Miami Herald reports.

“The Biden administration on Monday is expected to formally accuse the Chinese government of breaching Microsoft email systems used by many of the world’s largest companies, governments and military contractors,” the New York Times reports,

“The United States is also set to organize a broad group of allies, including all NATO members, to condemn Beijing for cyberattacks around the world.”

Politico: “The push to drain China’s influence from the U.S. economy has reached America’s farm country, as congressional lawmakers from both parties are looking at measures to crack down on foreign purchases of prime agricultural real estate.”

“The debate over farm ownership comes amid broader efforts by Congress and the Biden administration to curb the nation’s economic reliance on China, especially in key industries like food, semiconductors and minerals deemed crucial to the supply chain.”

“In what appeared to be the first ruling upholding a coronavirus vaccine mandate by a university, a federal judge affirmed on Monday that Indiana University could require that its students be vaccinated against the virus,” the New York Times reports.

Wall Street Journal: “The Delta variant is hardening a divide between people who are fully vaccinated against Covid-19 and those who aren’t, prompting hospitals to brace for new case surges and health authorities to redouble vaccination efforts. Now the most common strain in the U.S., Delta is spreading as public life resumes at restaurants, sporting events and other public settings across the country.”

“Prime Minister Boris Johnson’s ‘freedom day’ ending over a year of COVID-19 lockdown restrictions in England was marred on Monday by surging infections, warnings of supermarket shortages and his own forced self-isolation,” Reuters reports.

“Johnson’s bet that he can get one of Europe’s largest economies firing again because so many people are now vaccinated marks a new chapter in the global response to the coronavirus. If the vaccines prove effective in reducing severe illness and deaths even while infections reach record levels, Johnson’s decision could offer a path out of the worst public health crisis in decades. If not, more lockdowns could loom.”

“First, the new British Health Secretary Sajid Javid — three weeks on the job, in the middle of an explosion in cases, who had declared it was time to ‘live with the virus’— announced on Saturday that he’d tested positive for the coronavirus and would self-isolate,” the Washington Post reports.

“Then on Sunday, both Prime Minister Boris Johnson and Finance Minister Rishi Sunak said they’d been alerted by the National Health Service that since they had been in close contact with an infected individual — i.e., Javid — they must immediately quarantine at home.”

“The quarantine of the top leadership in a British government struggling to manage the pandemic comes less than 24 hours before Johnson plans to end almost all government mandates in England for mask-wearing and social distancing.”

The New York Times reports Johnson’s initial announcement that he would take part in a “daily contact testing pilot” rather than isolate himself was met with widespread outrage.

I have absolutely no sympathy for those who are now getting seriously ill and dying from COVID. At this point, they all chose to die from their arrogant ignorance. So good riddance to them. The world will be a better place once all these anti-vaxx Covidiots are all wiped away.

“At least 51 senators must be present on the floor for the upper chamber to conduct business, according to the U.S. Constitution. Quorum is normally assumed unless a roll call vote or other motion finds that not enough senators are present.”

Read this Twitter thread below on how that won’t work, Lady G. Dems could then pass everything by unanimous consent. Congress ain’t Texas and vice versa.

New York Times: “Mr. Klain is an unquestioned man to see in the current White House, the most influential chief of staff of recent vintage and a marked departure from the four battered and marginalized short-timers who held the position under Trump.”

“Mr. Klain, who was the chief of staff for Vice Presidents Biden and Al Gore, is viewed in and out of the West Wing as the essential conductor of administration business, a surrogate for the president and — in the mischievous portrayal of opponents — an all-powerful, unelected orchestrator of an ultraliberal agenda. Republicans have taken to calling him Prime Minister Klain.”

New York Times: “The Biden team picked up where the Obama administration left off with the repatriation of a Moroccan man, reducing the prison population to 39.”

Politico: “Not long ago, a Democratic administration taking unilateral action to rein in corporations on everything from non-compete agreements to prescription drug affordability would have engendered fury from elected conservatives.”

“Yet over the last week, few Republicans were warning that Biden’s actions would severely kneecap business or slow the economic recovery. And inside the White House, the relative silence was not just noticed but seen as vindication.”

“Fourteen months after it was approved, with the public health threat in retreat and most members of Congress vaccinated, a growing number of lawmakers are using the [voting proxy] practice to attend political events, double down on work back home or simply avoid a long commute to Washington,” Politico reports.

“Perhaps no one has benefited more from the arrangement than Speaker NANCY PELOSI, who recently informed lawmakers that proxy voting would be in effect for the remainder of the summer. It has allowed Ms. Pelosi, whose majority is so slim that she can afford to lose no more than four Democrats if every member is present and voting, to all but ensure that absences alone do not cost her pivotal support.”

“South Korean President Moon Jae-in will not visit Tokyo for the upcoming Olympics, scrapping plans for what would have been his first summit with Prime Minister Yoshihide Suga,” Reuters reports,

“A new congressional bill seeks to create a board to help rename more than 1,000 towns, lakes, streams, creeks and mountain peaks across the U.S. still named with racist slurs,” Axios reports.