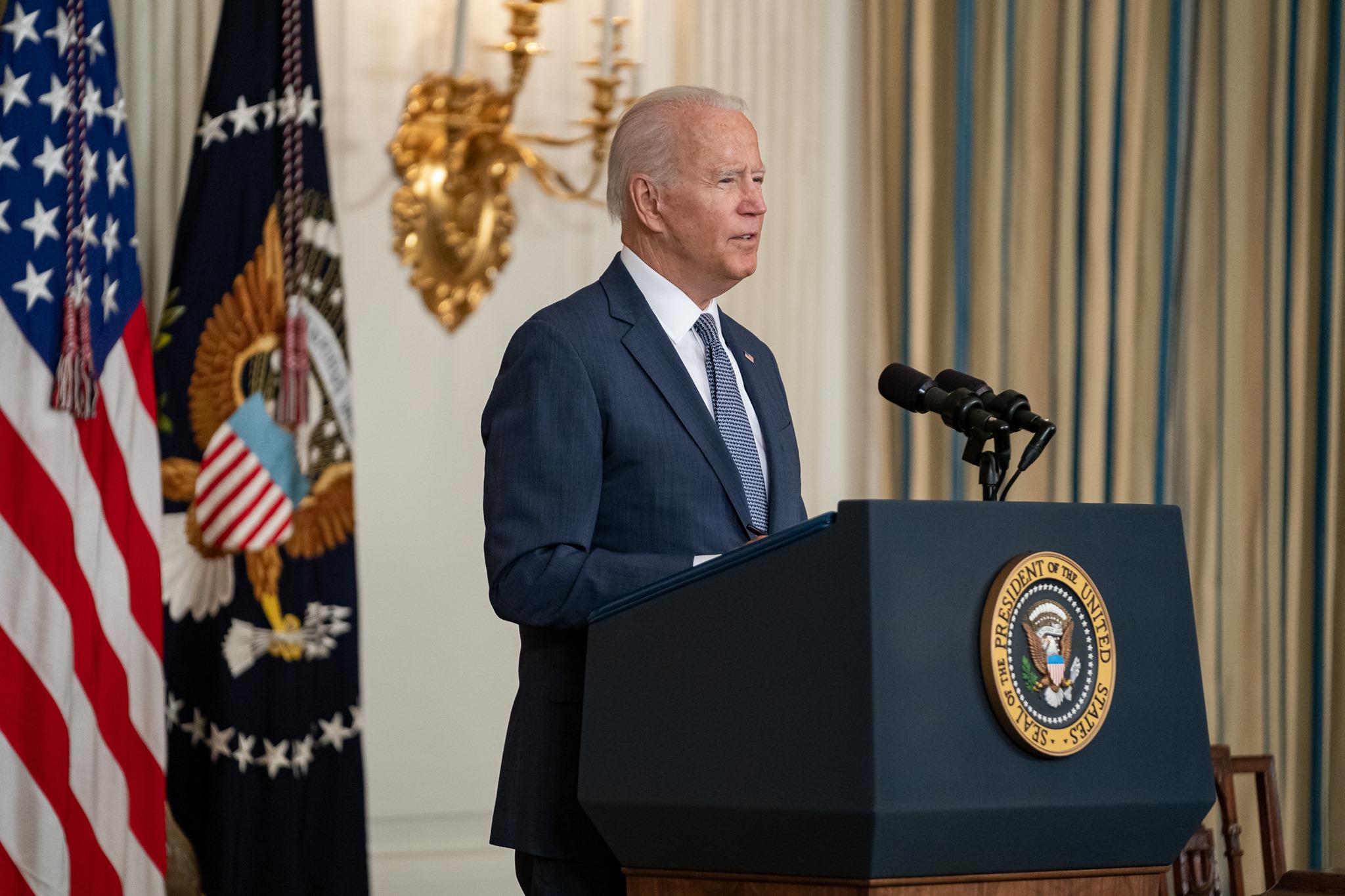 A new Bright Line Watch poll finds 66% of southern Republicans say they want the South to secede from the United States and form a smaller, regional country.

A new CBS News/YouGov poll of those Americans who are not vaccinated finds 74% of them would not get vaccinated even if their doctor recommended it, while another 16% said their doctor already has suggested it.

Just 10% would get vaccinated if their doctor recommended it.

“If ever there was a political bloc that could be counted on to hold a candle for Donald Trump, it would seem to be white evangelical Christians, who maintained a near-uniform front for the Republican throughout his presidency and beyond,” the Boston Globe reports.

“Yet, as some 1,200 evangelicals gathered here for the Family Leadership Summit, widely seen as the first political event on the long road to the 2024 Republican primary, there was a feeling among some that it was time to move on.”

“Arizona county election officials have identified fewer than 200 cases of potential voter fraud out of more than 3 million ballots cast in last year’s presidential election, undercutting former President Donald Trump’s claims of a stolen election as his allies continue a disputed ballot review in the state’s most populous county,” the AP reports.

“Six months into the Biden administration, Senate Democrats are expressing a cautious optimism that the party can keep control of the chamber in the 2022 midterm elections, enjoying large fund-raising hauls in marquee races as they plot to exploit Republican retirements in key battlegrounds and a divisive series of unsettled G.O.P. primaries,” the New York Times reports.

“Four Senate Democratic incumbents are up for re-election in swing states next year — making them prime targets for Republican gains. But in none of those four states — New Hampshire, Nevada, Arizona and Georgia — has a dominant Republican candidate emerged to consolidate support from the party’s divergent wings.”

New York Times: “Swing-state Democratic incumbents, like Senators Raphael Warnock of Georgia and Mark Kelly of Arizona, restocked their war chests with multimillion-dollar sums ($7.2 million and $6 million, respectively), according to new financial filings this week. That gives them an early financial head start in two key states where Republicans’ disagreements over former President Donald Trump’s refusal to accept his loss in 2020 are threatening to distract and fracture the party.”

“But Democratic officials are all too aware of the foreboding political history they confront: that in a president’s first midterms, the party occupying the White House typically loses seats — often in bunches.”

“Sen. Joe Manchin (D-WV) — a key Democratic holdout over efforts to pass federal voting rights legislation — is expected to head to Texas on Friday for a fundraiser with a host committee that includes several wealthy Republican donors,” the Texas Tribune reports.

“The host committee includes titans of the Texas oil and gas industry — many of whom donate almost exclusively to Republicans.”

“Republicans on the campaign trail are zeroing in on Vice President Harris as their political target of choice as the midterm battle draws closer,” The Hill reports.  “The attacks against Harris come as Republicans have struggled to define President Biden, who enjoys higher approval ratings than his vice president and who has largely managed to sidestep any major controversies so far.”

Peter Bernegger, one of the Wisconsinites conducting a review of the presidential election. was convicted in 2009 of bank fraud and mail fraud, the Milwaukee Journal-Sentinel reports.  A federal judge in Mississippi sentenced him to 70 months in prison and ordered him to pay restitution of $2.1 million.

Jason Roe, a Michigan Republican Party leader who faced grassroots pushback after saying the 2020 presidential election wasn’t stolen and blaming ex-President Donald Trump for the loss, has resigned his position with the state party, the Detroit Free Press reports.  Roe spoke to Mark Barakbak: “I haven’t spoken to one professional in the business who believes the election was stolen in the way the former president continues to say. Not a single person.”

Tom Nichols: “What do we call a man who turns on everything he once claimed to believe? For a practitioner of petty and self-serving duplicity, we use ‘sellout’ or ‘backstabber.’ (Sometimes we impugn the animal kingdom and call him a rat, a skunk, or a weasel.) For grand betrayals of weightier loyalties—country and faith—we invoke the more solemn terms of ‘traitor’ or ‘apostate.’”

“But what should we call J. D. Vance, the self-described hillbilly turned Marine turned Ivy League law-school graduate turned venture capitalist turned Senate candidate? Words fail. His perfidy to his own people in Ohio is too big to allow him to escape with the label of ‘opportunist,’ and yet the shabbiness and absurdity of his Senate campaign is too small to brand him a defector or a heretic.”

Oklahoma state Rep. Sean Roberts (R) has requested that the state election board call for a forensic and independent audit of the 2020 General Election results in Oklahoma County and two other random counties in the state, KOCO reports.

“Matte Nox is the assumed name and online persona of Matthew Tunstall, a 34-year-old from Texas who over the past three years has raised millions of dollars operating two political action committees that impersonated the Trump campaign,” CNN reports.

“Tunstall’s two PACs, Support American Leaders and Campaign to Support the President, have together raised a total of $3.4 million to date… While much of that money pays for the billions of robocalls the two groups make, almost all of which feature recorded soundbites of public statements from Trump, a CNN KFile analysis shows that the PACs paid Tunstall at least $738,000 of that money to date.”

“Their intervention has rankled some senior Trump advisers, who regard it as an act of disloyalty — and one that could lead to an embarrassing defeat for the former president, who has put his name on the line by getting involved. A late infusion of cash, they worry, could complicate Carey’s prospects in the Aug. 3 contest, given that he is already at a financial disadvantage.”

Politico: “Forty-one candidates have met the qualifications to run in the California gubernatorial recall election, less than a third of the number who ran in the state’s memorable 2003 contest and well below what some political experts months ago had predicted, according to an official list released Saturday night.”

“The recall field is notably absent of prominent Democratic politicians after Gov. Gavin Newsom’s campaign successfully deterred other leaders in his party from giving their voters an attractive option.”

“More than 18 months before the first presidential primary of 2024, most potential Republican candidates are just getting a sense of the political landscape, tiptoeing through early-voting states and trying to make friends in key places. Then there’s Kristi Noem,” the AP reports.

“Her combative style, no surprise to those who follow her, is evidence of how competitive the nomination race will be if Donald Trump stays on the sidelines. Noem charged into Iowa on Friday singing a battle hymn and armed with barbed comments for her fellow GOP governors. At a conservative gathering in Des Moines, she told the crowd she ‘really hates this America’ under President Joe Biden’s leadership, then led them in singing ‘The Battle Hymn of the Republic.’”

Politico: “House Republicans spent the last four years drowning under an avalanche of Democratic campaign cash. Now they’re staging a fundraising comeback — just in time for a run at the majority.”