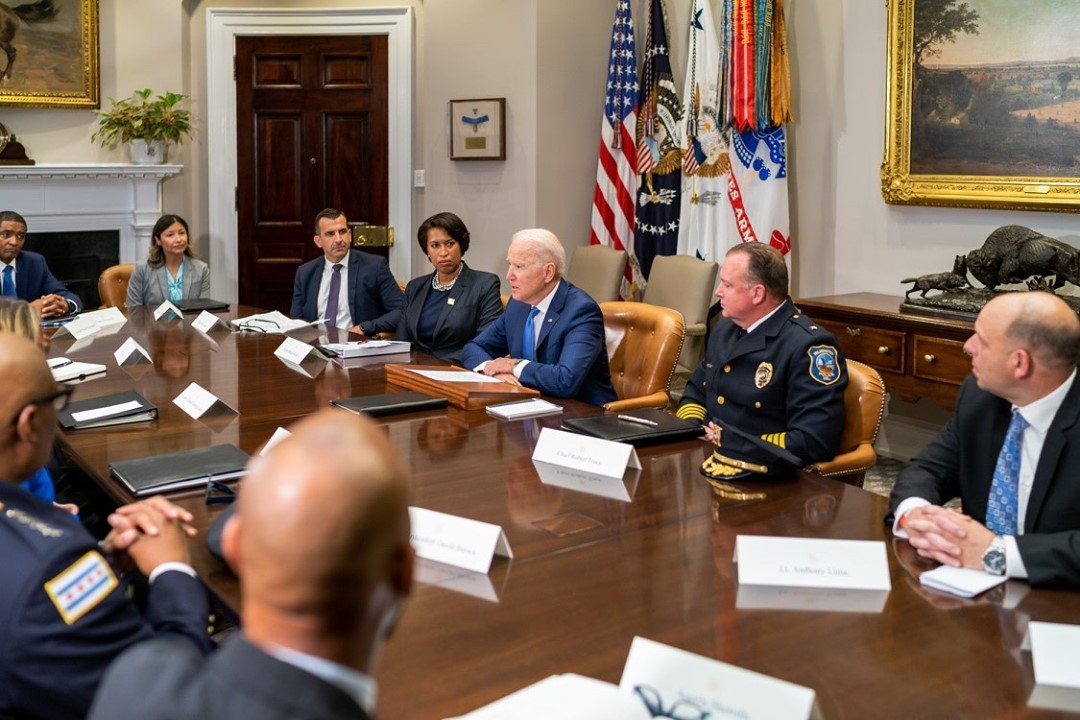 “The GOP’s lead negotiator for a bipartisan infrastructure bill said Sunday that lawmakers had nixed increased IRS enforcement as a proposed way to pay for the package,” NBC News reports.

Politico: “Sanders gave Washington whiplash this week — and it was all part of his plan. Barely 24 hours after the Vermont senator publicly rejected a $3.5 trillion spending deal following a Monday meeting with President Joe Biden, he turned around to tout it as the most transformational policy proposal in nearly 100 years.”

“The shift in tone was a tactic Sanders used to coax moderate Democrats into going far higher than they might have otherwise felt comfortable. After he had insisted on shooting for the moon with a $6 trillion budget proposal, $3.5 trillion suddenly looked pretty reasonable. The episode revealed a conciliatory side to the liberal icon often depicted by the media and Republicans as wild-eyed and well to the left of his party.”

Biden called on Congress to find a path to citizenship for Dreamers — and suggested using budget reconciliation to do it. “Yesterday’s Federal court ruling is deeply disappointing,” Biden said in a statement Saturday.

“The Department of Justice intends to appeal this decision in order to preserve and fortify DACA. And, as the court recognized, the Department of Homeland Security plans to issue a proposed rule concerning DACA in the near future,” he added. “But only Congress can ensure a permanent solution by granting a path to citizenship for Dreamers that will provide the certainty and stability that these young people need and deserve.”

“I have repeatedly called on Congress to pass the American Dream and Promise Act, and I now renew that call with the greatest urgency,” he said, urging the Senate to do so “through reconciliation or other means.”

The United States recorded 79,310 new cases of COVID-19, more than any other country in the world, the Daily Beast reports. The soaring number matches the level hit in October 2020, a record at the time, though it would not remain so for long.

Nearly 20 percent of the nation’s new coronavirus infections are now happening in Florida alone, The Hill reports. Currently, the state is reporting an average of 29 new infections for every 100,000 people per day — more than four times the national average.

The Week quotes a WHO epidemiologist: “We’re getting further away from the end of the pandemic.”

Surgeon General Vivek Murthy said he is “worried about what is to come” in the COVID-19 pandemic as cases increase throughout the U.S., primarily among those who are not vaccinated, The Hill reports.

Said Murthy: “I am worried about what is to come because we are seeing increasing cases among the unvaccinated in particular. And while if you are vaccinated you are very well protected against hospitalization and death, unfortunately that is not true if you are not vaccinated.”

Washington Post: “Around the world, scientists and public health officials fear that the world’s protracted battle against the coronavirus is at a delicate and dangerous moment.”

“Reality checks abound. Coronavirus infections are surging in places with low vaccination rates. SARS-CoV-2 is continuing to mutate. Researchers have confirmed the delta variant is far more transmissible than earlier strains. Although the vaccines remain remarkably effective, the virus has bountiful opportunities to find new ways to evade immunity. Most of the world remains unvaccinated.”

“And so the end of the pandemic remains somewhere over the horizon.”

Associated Press: “Free lottery tickets for those who get vaccinated had few takers. Free hunting and fishing licenses didn’t change many minds either. And this being red-state Arkansas, mandatory vaccinations are off the table.”

“So Republican Gov. Asa Hutchinson has hit the road, meeting face-to-face with residents to try to overcome vaccine hesitancy — in many cases, hostility — in Arkansas, which has the highest rate of new COVID-19 cases in the U.S. but is near the very bottom in dispensing shots.”

New York Times: “A wave of opposition to Covid vaccines has risen within the Republican Party, as conservative news outlets produce a steady diet of misinformation about vaccines and some G.O.P. lawmakers invite anti-vaccination conspiracy theorists to testify in statehouses and Congress. With very little resistance from party leaders, these Republican efforts have elevated falsehoods and doubts about vaccinations from the fringes of American life to the center of our political conversation.”

“It’s a pattern that was seen throughout the Trump administration: Rather than rebuke conspiratorial thinking and inaccuracies when they begin spreading among their party’s base, many Republicans tolerate extremist misinformation.”

“Global health experts have condemned Boris Johnson’s lifting of most Covid-19 legal restrictions in England on Monday as ‘a threat to the world,’ as daily case numbers in the UK rose to more than 50,000,” the Financial Times reports.

“The UK now has the third highest number of cases of any country in the world — only Indonesia and Brazil have more — and some scientists fear it could become a breeding ground for new Covid variants.”

“An investigation by Haitian and Colombian authorities, alongside Interpol, into Moise’s killing has revealed that Badio appeared to have given an order for the assassination three days before the attack.”

“Less than 24 hours before Reps. Matt Gaetz and Marjorie Taylor Greene are scheduled to host an America First rally in Southern California, protesters have pushed the controversial GOP Congress members to move the event for a third time,” the Orange County Register reports. And then, just hours before it was supposed to start, a third event venue has canceled Reps. Marjorie Taylor Greene (R-GA) and Matt Gaetz’s (R-FL) “America First” tour stop in Southern California.

“U.S. officials say the number of possible new cases in the Austrian capital—long a nexus of U.S. and Russian espionage—is now greater than the number reported by officials in any city except for Havana itself, where the first cases were reported.”

“President Bashar al-Assad took the oath of office for a fourth term in war-ravaged Syria on Saturday, after officially winning 95% of the vote in an election dismissed abroad,” AFP reports.

The daughter of Afghanistan’s ambassador to Pakistan was briefly kidnapped and “severely tortured” by unknown assailants, NBC News reports.

“Brazil President Jair Bolsonaro has begun sowing distrust in next year’s elections, alarming lawmakers and the courts alike,” Axios reports.  “In speeches, Bolsonaro, a former military captain, has been questioning the integrity of an electronic ballot system that’s been in place since 1996 and suggesting he might not even allow elections to happen.”

Russian President Vladimir Putin has outlined the historical basis for his claims against Ukraine in a controversial new essay that has been likened in some quarters to a declaration of war, the Atlantic Council reports.

More than 1 million Cubans are using a tool financed by the U.S. government to circumvent their own government’s social media blackouts, Bloomberg reports.

“Minister for Finance Paschal Donohoe has said that Ireland cannot be part of an international agreement on a minimum global tax rate of 15 percent,” the Irish Times: reports.  “Earlier this month, the G7 and OECD countries reached agreement but not unanimous consensus on the key aspects of a global tax deal which seeks to introduce a minimum rate of 15 per cent. Ireland is among a handful of countries, including Hungary, who are opposed to a 15 percent rate.”

Associated Press: “No one disputes that the world is unfair. But no one expected a vaccine gap between the global rich and poor that was this bad, this far into the pandemic.”

“Inequity is everywhere: Inoculations go begging in the United States while Haiti, a short plane ride away, received its first delivery July 15 after months of promises — 500,000 doses for a population over 11 million. Canada has procured more than 10 doses for every resident; Sierra Leone’s vaccination rate just cracked 1% on June 20.”

Washington Post: “What emerges is a portrait of an ambitious television personality who came of age in privilege — having grown up in an upper-class enclave and attended private schools — but who, by his own telling, is a victim. Carlson, in his writings and commentaries, has described resentment toward liberals as far back as the first grade.”

“He has frequently ridiculed the notion that America should celebrate diversity and has lashed out repeatedly at the idea that he, as a White person, bears any responsibility for racism against Black people…. Two of the leading conservative activists battling critical race theory, an academic construct in which systemic racism is studied, credit him with the rapid rise of their movement, while Black scholars he frequently targets say he mischaracterizes and manipulates their work to suit his agenda.”

Los Angeles County Sheriff Alex Villanueva said he will not enforce the reinstated indoor mask mandate because it contradicts guidelines from health officials, NBC News reports.  Said Villanueva: “Forcing the vaccinated and those who already contracted Covid-19 to wear masks indoors is not backed by science and contradicts the CDC guidelines.”

New York Times: “Officials in a little-known security unit within the Commerce Department conducted unauthorized surveillance and investigations into the agency’s employees that targeted people of Chinese and Middle Eastern descent, Senate investigators said in a new report.”

“It found that the work of the office — consumed by concerns about rampant Chinese espionage in the United States — sometimes veered into racial profiling, and that its leaders used extreme tactics, such as sending masked agents to break into offices to search for incriminating evidence.”

White House press secretary Jen Psaki said that approximately 20,000 Afghans have applied for the special immigrant visas for those that supported the U.S. during the Afghanistan War, CBS News reports.

Politico: “The irony, in a war full of them, is that a commander almost uniquely qualified to fight it was instead ordered to walk America off the battlefield for good. And as helicopters and cargo planes rapidly moved U.S. troops and equipment out of bases in Afghanistan, Scott Miller has been charged with finding answers to the difficult questions the rapid American withdrawal has raised.”

Said Miller: “Those questions weigh on you, and it’s not just me. There are a lot of other people in this ‘last rotation’ in Afghanistan that have served here on multiple deployments, and we all have relationships with the Afghan people.”

He added: “And even as we’re leaving, with the risk to the Afghan people and nation on the rise, I’ve been struck by how gracious they are towards us as we depart.”