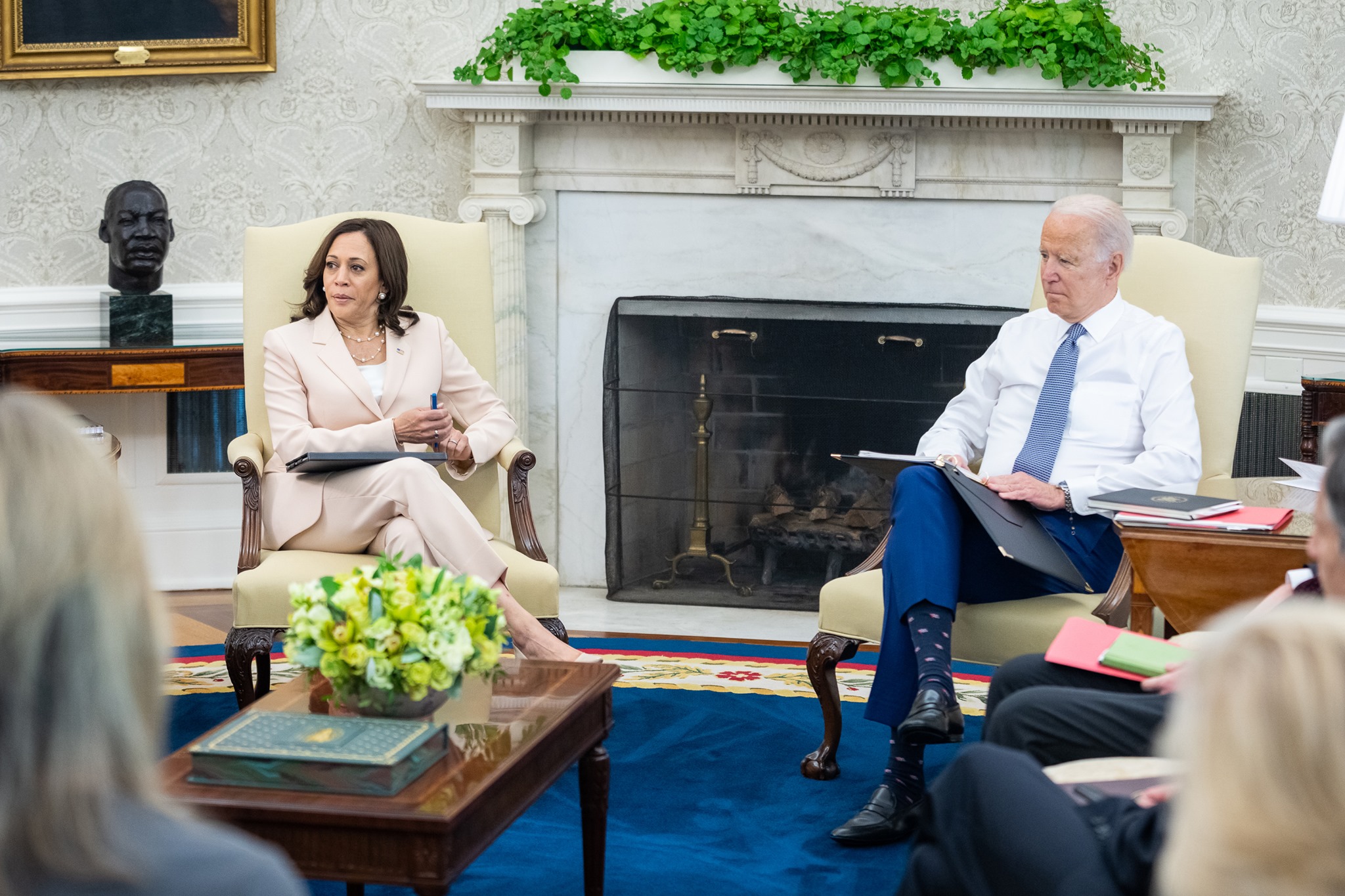 Sean Trende: “In the United States, the Republican Party is in the midst of a transition from a party based in the suburbs to a party based in rural areas. The growing urban-suburban-rural divide increasingly explains American politics. We would expect an urban county today to be around seven points more Democratic than a demographically identical rural county would be.”

KENTUCKY GOVERNOR — On Monday, state Auditor Mike Harmon became the first notable Republican to announce a campaign against Gov. Andy Beshear, a Democrat who will be up for re-election in 2023. Harmon first won statewide office in 2015 when he unseated Democratic Auditor Adam Edelen in a 52-48 upset, and he held the post 56-41 in 2019. Harmon launched his new campaign by going after Beshear’s public health measures, arguing that if he had been governor, he’d have “never, never issued a mask mandate.”

RHODE ISLAND GOVERNOR — WPRI reported Saturday that there’s “growing buzz” that former Secretary of State Matt Brown could launch another bid for governor, though the Democrat did not respond to any of Nesi’s inquiries during the previous week-and-a-half. Brown, who left office following his aborted 2006 run for the Senate, re-emerged on the political stage in 2018 when he launched a primary campaign against then-Gov. Gina Raimondo.

Brown raised little money, but he hoped that he’d be able to take advantage of Raimondo’s long and turbulent relationship with progressives. His longshot campaign was enough to draw the attention of the DGA and EMILY’s List, which financed a pro-Raimondo super PAC in the primary, but the governor held him off 57-34. Raimondo went on to win her second term that fall before resigning earlier this year to become U.S. secretary of commerce, a move that elevated Lt. Gov. Dan McKee to the state’s top job.

IOWA GOVERNOR — Democrat Deidre DeJear, who was the 2018 nominee for secretary of state, announced Monday that she is forming an exploratory committee for a possible bid for the Hawkeye State’s governorship. DeJear won her 2018 primary by narrowly defeating Jim Mowrer, who had waged two well-funded bids for Congress, but she lost the general to GOP incumbent Paul Pate 53-45.

If DeJear decides to enter the race, she would join state Rep. Ras Smith as the second prominent candidate to get in the contest. Either DeJear or Smith would be the first Black person elected statewide in Iowa.

GEORGIA 6TH CD — Former Republican state Rep. Meagan Hanson kicked off a bid for this suburban Atlanta seat on Monday, joining Army veteran Harold Earls in the GOP primary to take on Democratic incumbent Lucy McBath. This district, which backed Joe Biden 55-44, has been at the forefront of metro Atlanta’s shift to the left, a phenomenon that Hanson experienced firsthand.

Hanson was elected to her state House seat 51-49 in 2016 as Hillary Clinton was carrying it 54-40. The blue shift would be too much for her to survive in 2018, though, as she lost to Democrat Matthew Wilson 52-48 while Stacey Abrams was carrying the district 58-41.

Hanson and Earls could soon have company in the race, as former state ethics commission chair Jake Evans, who just resigned from his post recently, has filed paperwork with the FEC for a potential bid. Despite the current partisan lean of this district, Republicans can use redistricting to make this or the neighboring 7th District better for themselves.

Evans also has connections to several prominent Georgia Republicans through his father, Randy Evans, who was an advisor to former Gov. Nathan Deal and ex-House Speaker Newt Gingrich; the older Evans later was tapped by Donald Trump as ambassador to Luxembourg.

NEBRASKA 2ND CD — State Sen. Tony Vargas announced Tuesday that he would seek the Democratic nomination to take on Nebraska Rep. Don Bacon, who is one of just nine House Republicans who represents a Biden district. Vargas, who is the son of immigrants from Peru, would also be the first Latino to represent the Cornhusker State in Congress, but he’ll face a challenging task flipping the Omaha-based 2nd District even if his Republican legislative colleagues aren’t able to gerrymander it.

Vargas’ only notable intra-party foe so far is 2020 Senate candidate Alisha Shelton, who would also make history as Nebraska’s first Black member of Congress, though others may still get in. Bacon, meanwhile, ran well ahead of the GOP ticket in 2020 when he won his third term 51-46 against a well-funded opponent even as his constituency was swinging from 48-46 Trump to 52-46 Biden.

It also remains to be seen whether this seat will remain competitive turf after Nebraska’s 49-member unicameral legislature finishes with redistricting. The state Senate became officially nonpartisan following the passage of a 1934 referendum that also abolished the state House (progressive George Norris, a U.S. senator who famously showed little allegiance to any party, ardently argued that his state could avoid the “evils” of the bicameral system used by Congress and every other state legislature), but members’ party affiliations are well known. Republicans have controlled the body for decades, and the 2020 elections ended with Team Red holding a 32-17 majority.

The unicameral’s current rules, though, give senators an uncommonly strong filibuster, and because the GOP fell one seat short of the two-thirds majority it needs to cut off debate, Democrats have the power to block a gerrymander as long as the minority party remains united.

The GOP retains the ability to end the filibuster rule with a simple majority, but it’s far from guaranteed that they’ll take this dramatic step in September, when senators are scheduled to reconvene for a special session devoted to redistricting. That’s because both Republicans, as well as Democrats, have made use of the filibuster, including during this spring’s regular session, to delay or block bills favored by a majority of the chamber, so they may be reluctant to do away with this tool now.

SOUTH CAROLINA GOVERNOR — The State writes that state Senate Majority Leader Shane Massey, who has previously been mentioned as a possible Republican primary opponent for Gov. Henry McMaster, is “reportedly still mulling the idea.” Massey still does not appear to have said anything publicly about his interest in taking on the incumbent next year.

Don Huffines (R), who is challenging Texas Gov. Greg Abbott (R) in the Republican primary, says he has raised $9.1 million since launching his bid in early May, the Texas Tribune reports. Huffines did not disclose how much of that figure was self-funded.

“The National Republican Congressional Committee announced Wednesday that it had raised $45.4 million in the second quarter of 2021, the most it has ever raised in three months of a non-election year, as Republicans seek to take over the House in 2022,” CNN reports.

“Democrats are protecting what is effectively a four-seat margin in the chamber. The Democratic Congressional Campaign Committee also said last week that it had broken its own record, but its total — $36.5 million — for the quarter is about $9 million short of its Republican counterpart.”

Pew Research Center: “Five major publicly held local TV station companies – Gray, Nexstar, Scripps, Sinclair and Tegna – report political advertising revenue separately from other types of revenues in their Securities and Exchange Commission filings. In 2020, the five companies reported a total of $2 billion in political advertising revenue, compared with $1.2 billion in 2018 and $843 million in 2016, the two most recent election years.”

FLORIDA 13TH CD — Attorney and 2020 House candidate Amanda Makki has been considering joining the GOP primary for this open seat and now says she’s likely to enter the race later this month. Makki finished second in the 2020 Republican primary for this Pinellas County-based district, losing to Anna Paulina Luna 36-28.

The Tampa Bay Times reported Tuesday that William Braddock filed paperwork ending his campaign for the GOP nod in mid-June, a development that came after Politico obtained a recording of him threatening to murder intra-party rival Anna Paulina Luna.

Braddock acknowledged this week that he had dropped out because Luna had obtained a restraining order against him, saying, “I can’t work with certain people when they see things like that of me in the news,” though he said he might eventually decide to return to the race. A hearing is set for mid-September to determine whether Luna’s temporary stalking injunction against him should be permanent.

In seeking that restraining order, Luna also accused Braddock of conspiring with two other potential candidates, Matt Tito and Makki, both of whom have continued to deny any involvement.

The poll finds Turner ahead 43-36, with the remaining candidates taking 7% of the vote. That’s still a deficit for Brown, but the memo says that it’s a big shift from April, when an unreleased survey found Turner winning by a massive 42-10 margin. The only other poll we’ve seen was a late May Turner internal from Tulchin Research that showed her dominating 50-15.

Turner has enjoyed a huge financial edge throughout the contest, though Brown’s side is still spending enough to get their message out. Politico reports that Turner has outspent Brown $1.2 million to $617,000 on TV, while Turner’s detractors at Democratic Majority for Israel have deployed $475,000.

IOWA 3RD CD — Republican state Sen. Zach Nunn announced Tuesday that he would challenge Democratic Rep. Cindy Axne in this Des Moines-area seat. Nunn, who served in the Middle East with the Air Force, won a promotion from the state House to the upper chamber in 2018 by prevailing 57-43 as Republican Gov. Kim Reynolds was carrying his state Senate district by a considerably smaller 50-47 spread.