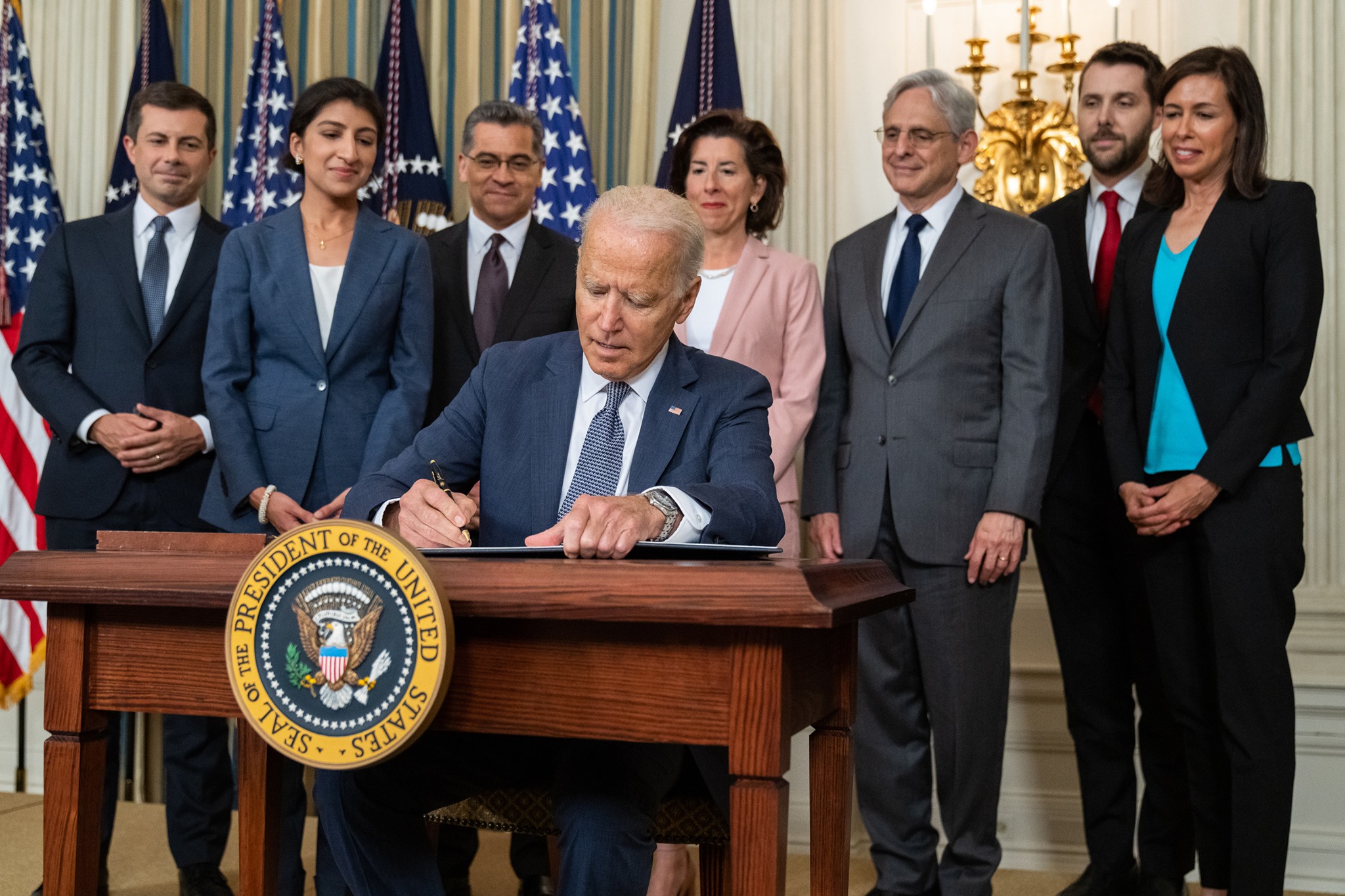 “President Biden on Tuesday delivered his most forceful condemnation yet of the wave of voting restrictions proposed in Republican-led states nationwide — efforts the president argued are the biggest threat to American democracy since the Civil War,” the Washington Post reports.

“He compared modern day laws to the voter suppression that took place under the KKK and the Jim Crow laws that imposed poll taxes, literary tests, and disenfranchised nearly all voters who were not White or male. He railed against new state laws that restrict access — calling them “raw and sustained election subversion” — and said that the 2022 midterm elections could highlight the damaging impacts of the new laws.”

Said Biden: “Hear me clearly. There’s an unfolding assault taking place in America today, an attempt to suppress and subvert the right to vote and fair and free elections. An assault on democracy, an assault on liberty, an assault on who we are.”

The Texas House voted to send law enforcement to track down Democrats who left the state a day earlier in protest of Republicans’ priority elections legislation “under warrant of arrest if necessary,” the Texas Tribune reports.

Texas Gov. Greg Abbott (R) said the Democratic lawmakers who left the state earlier that day to deny Republicans a quorum to convene a special legislative session will be arrested upon their return to the Lone Star State, KVUE reports.

Said Abbott: “If these people want to be hanging out wherever they’re hanging out on this taxpayer-paid junket, they’re going to have to be prepared to do it for well over a year. As soon as they come back in the state of Texas, they will be arrested, they will be cabined inside the Texas Capitol until they get their job done.”

Austin American Statesman: Texas Democrats’ walkout has precedent, but will it work?

“Several GOP senators who initially endorsed a bipartisan infrastructure deal are warning they may ultimately vote against it as it moves through the legislative process, a sign of the daunting hurdles ahead as proponents try to push the massive proposal through the evenly divided chamber by next month,” CNN reports.

Initially, 11 Republicans signed off on an outline of the plan… But five of those 11 GOP senators said that they are not committed to backing the bill, wary of some of the details for paying for the measure that have come to light and expressing misgivings about Democratic leaders’ plans to move the narrower bipartisan bill alongside a much-larger Democratic-only bill that would fulfill much of President Joe Biden’s economic agenda.”

Sen. Joe Manchin (D-WV) warned that he wants both a bipartisan infrastructure bill and a separate Democratic-only bill to be fully paid for, The Hill reports.

Said Manchin: “I think everything should be paid for. We’ve put enough free money out.”

“Nearly half of the population on this island nation is facing acute hunger, while gang members block fuel distribution routes to the capital and scare away tourists from pristine beaches. In contrast to neighboring countries, Haiti has yet to administer a single vaccine against Covid-19,” the Wall Street Journal reports.

“A country that for much of its history has been stifled by poverty and strife is now mired in its worst crisis in a generation after President Jovenel Moïse was assassinated in his home last week in a murky attack the police blame on two dozen foreign mercenaries and a 63-year-old doctor they say wanted to be president.”

“Just days after President Biden called President Vladimir Putin of Russia and demanded that he act to shut down ransomware groups that are attacking American targets, the biggest of them has gone off-line,” the New York Times reports. “The mystery is who made that happen.”

A prominent critic of Russian president Vladimir Putin was arrested as he tried to file his election candidacy, the Times of London reports.

“Cuba’s Communist government stepped up its crackdown against demonstrators and activists on Monday, cutting off most communications with the outside world, deploying security forces across the country and arresting more than 100 people, many of whose whereabouts remain unknown,” the Wall Street Journal reports.

“Taliban fighters have encircled ten cities across Afghanistan as government forces buckle in the face of the insurgent offensive to recapture the country after the US withdrawal,” the Times of London reports.

“For much of the past decade, oil companies engaged in drilling and fracking have been allowed to pump into the ground chemicals that, over time, can break down into toxic substances known as PFAS — a class of long-lasting compounds known to pose a threat to people and wildlife — according to internal documents from the Environmental Protection Agency,” the New York Times reports.

“Approvals for oil and gas drilling on American public lands are set this year to reach their highest level since George W Bush was president, casting doubt on President Biden’s green agenda,” the Times of London reports.

The Washington Post has an excerpt of the must-read I Alone Can Fix It by Carol Leonnig and Phil Rucker.

“The morning of Nov. 3, 2020, President Trump was upbeat. The mood in the West Wing was good. Some aides talked giddily of a landslide… Trump’s voice was hoarse from his mad dash of rallies, but he thought his exhausting final sprint had sealed the deal. He considered Joe Biden to be a lot of things, but a winner most definitely was not one of them.”

Trump told aides: “I can’t lose to this fucking guy.”

Then-President Donald Trump told advisers that whoever leaked information about his stay in the White House bunker during protests last June had committed treason and should be executed for sharing details with the press, according to excerpts of a new book, Frankly, I Did Win The Election, obtained by CNN.  “Trump boiled over about the bunker story as soon as they arrived and shouted at them to smoke out whoever had leaked it. It was the most upset some aides had ever seen the president.”

The Republican Party’s top lawyer, Justin Riemer, warned in November against continuing to push false claims that the presidential election was stolen, calling efforts by some of the former president’s lawyers a “joke” that could mislead millions of people, according to an email obtained by the Washington Post.

Wrote Riemer: “What Rudy and Jenna are doing is a joke and they are getting laughed out of court. They are misleading millions of people who have wishful thinking that the president is going to somehow win this thing.”

“Senate Republican leaders have tried to put former President Trump in the rearview mirror, rarely mentioning his name and keeping focused instead on the Democratic agenda, but Trump’s iron grip on the party’s grassroots is making it tougher and tougher to keep ignoring him,” The Hill reports.

Former President Donald Trump is quoted in Landslide by Michael Wolff saying he is “very disappointed” in Supreme Court Justice Brett Kavanaugh and that he “hasn’t had the courage you need to be a great justice,” Axios reports.  Said Trump: “There were so many others I could have appointed, and everyone wanted me to.. Where would he be without me? I saved his life. He wouldn’t even be in a law firm. Who would have had him? Nobody. Totally disgraced. Only I saved him.”

Wolff writes that Trump feels betrayed by all three justices he put on the court, including Neil Gorsuch and Amy Coney Barrett, but “reserved particular bile for Kavanaugh.”

A chilling new video puts Donald Trump’s description of the Capitol riots on January 6 over images of what actually happened.

Washington Post: “Ousted Social Security commissioner Andrew Saul, the Trump appointee who declared Friday he would defy his firing by President Biden, on Monday found his access to agency computers cut off, even as his acting replacement moved to undo his policies.”

Michael Gerson: “For years, I’ve been saying to myself that GOP politics can’t go lower. I am perpetually wrong. Americans should never forget this moment — or let guilty Republicans forget it. When Republican activists cheered for death at CPAC, they were cheering for disproportionately Republican deaths. When elected Republicans feed doubts about safe, effective vaccines, they are making it more physically dangerous to be a Republican in America.”

Sen. Tim Scott (R-SC) told Axios that he hopes the Senate will pass a bipartisan police reform bill by the end of the month — setting a new deadline in the broader fight to massively overhaul the nation’s policing.

Said Scott: “I don’t think we can do this, after this month if we’re not finished.”

Senate Majority Leader Chuck Schumer “called on the Justice Department to investigate the National Rifle Association for bankruptcy fraud, saying the financially stable gun-rights group abused the system when it sought bankruptcy protection in the wake of a New York lawsuit seeking to put it out of business,” the Associated Press reports.

“Representatives of Pfizer met privately with senior U.S. scientists and regulators on Monday to press their case for swift authorization of coronavirus booster vaccines, amid growing public confusion about whether they will be needed and pushback from federal health officials who say the extra doses are not necessary now,” the New York Times reports.

Associated Press: “The Biden administration on Sunday upheld a Trump-era rejection of nearly all of China’s significant maritime claims in the South China Sea. The administration also warned China that any attack on the Philippines in the flashpoint region would draw a U.S. response under a mutual defense treaty.”

Foreign Policy: “Nearly a third of the U.S. State Department’s diplomats and professional support staff are considering leaving the department and are actively looking for new jobs.”

9to5Mac: “Apple TV+ today announced a new documentary special airing later this year. The show is entitled 9/11: Inside the President’s War Room and will explore the 2001 terrorist attack from the perspective of the immediate response of the people in charge.”