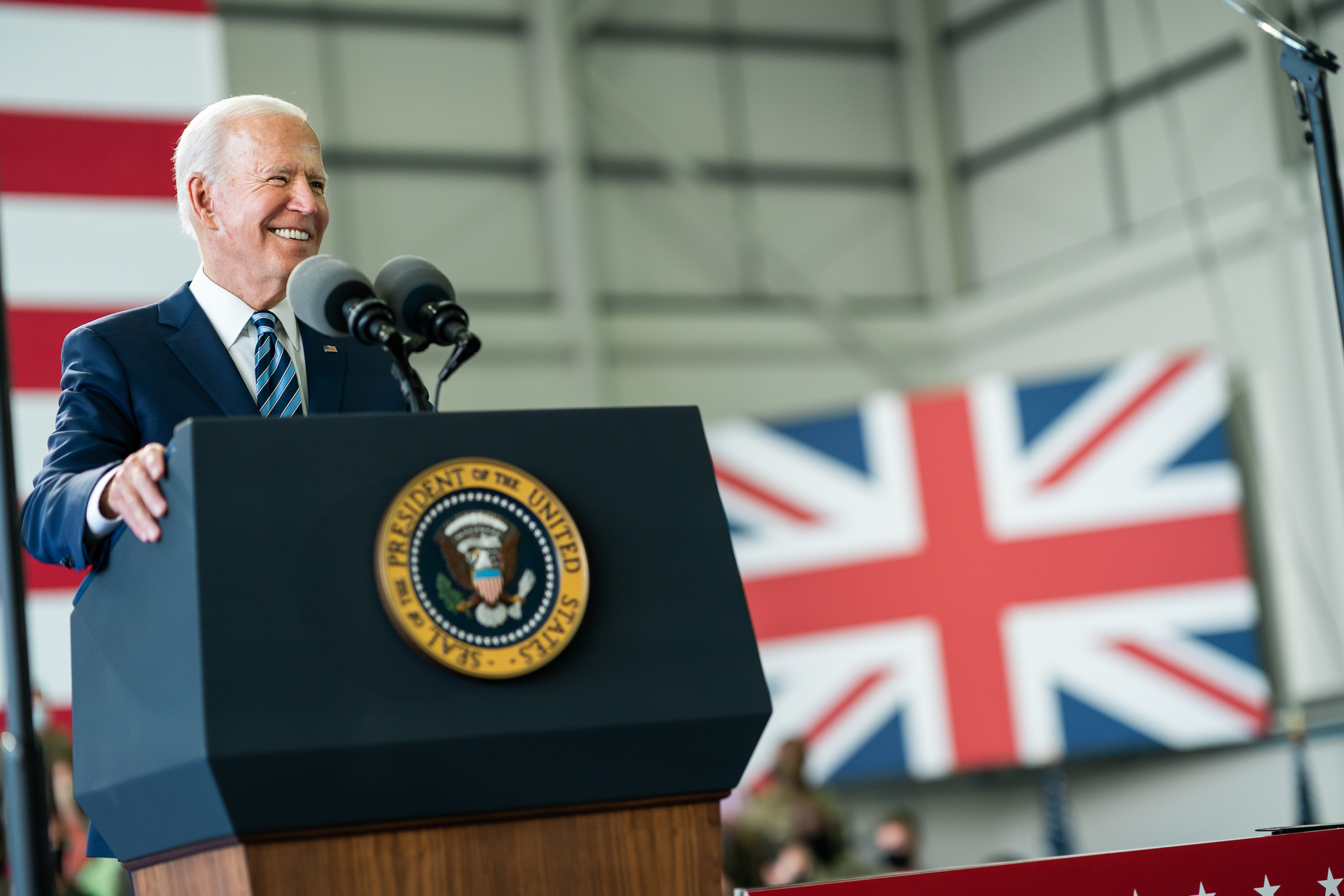 “Democrats in the Texas House of Representatives plan to leave the state and fly to Washington, D.C., Monday afternoon, in a bid to again deny Republicans the quorum needed to pass new voting restrictions with 27 days left in a special legislative session called largely for that purpose,” the Texas Tribune reports.

“Upping the ante in both the legislative fight at home and the national debate over voting rights, most House Democrats are expected to board a flight out of Austin headed for the U.S. capital without a set return date. They’ll need at least 51 of the 67 Democratic representatives to flee for their plan to work.”

NBC News: “The unusual move, akin to what Democrats did in 2003, would paralyze the chamber, stopping business until the lawmakers return to town or the session ends.”

“Key negotiators expect the Senate Budget Committee to settle on a roughly $3.5 trillion reconciliation package as the starting point for a Democrat-only bill for ‘soft’ infrastructure,” Axios reports.

“That total is well below the $6 trillion that Sen. Bernie Sanders — the Vermont independent who leads the committee — had initially proposed. Adopting it would be a blow to his fellow progressives.”

“A Haitian-born doctor based in Florida has been arrested as a ‘central’ suspect in the assassination of President Jovenel Moïse, and the national police chief suggested at a Sunday news conference that he believes the suspect was plotting to become president,” the New York Times reports.

McClatchy: “The Biden administration has not ruled out sending U.S. troops to Haiti to help secure the country amid political fallout from the assassination of its president.”

“As Western forces exit Afghanistan, Iran is watching with alarm. The resolution of one long-standing aim, the withdrawal of U.S. troops, is unleashing a separate challenge: what to do about the Taliban, another longtime problem for Iran, swiftly regaining power and territory next door,” the Washington Post reports.

“The top U.S. general in Afghanistan will step down on Monday, marking a symbolic end to 20 years of American military involvement here — and coming as an ascendant Taliban threatens to topple the central government,” the Washington Post reports.

Former President Donald Trump on Sunday widely praised those who attended the Jan. 6 rally that preceded the insurrection at the Capitol, repeatedly using the word “love” to describe the tone of the event, Politico reports.

CNN: A weekend of demagoguery shows why Trump can’t be ignored.

Forbes reports Trump also claimed—without evidence—he has heard information that deceased Jan. 6 rioter Ashli Babbitt, who was shot by a member of the U.S. Capitol Police while storming Congress, was instead killed by the “head of security” for a top Democrat.

Trump also all-but-confirmed he plans to run for president again in 2024: “I absolutely know my answer, and we’re going to do very well and people are going to be very happy.”

“A federal judge is considering whether to order financial penalties or other sanctions against some of former President Donald Trump’s lawyers who signed onto a lawsuit last year challenging Michigan’s election results,” the Associated Press reports.

New York Times on Cuban opposition protests: “The rallies, widely viewed as astonishing for a country that limits dissent, were set off by economic crises worsened by the pandemic.”

President Joe Biden said Cuba “must respect the right to peaceful assembly after thousands of demonstrators crowded streets across the island nation to protest the regime and call for access to coronavirus vaccines and food,” Bloomberg reports.

Said Biden: “We stand with the Cuban people and their clarion call for freedom and relief from the tragic grip of the pandemic and from the decades of repression and economic suffering to which they have been subjected by Cuba’s authoritarian regime.”

Dr. Anthony Fauci said “ideological rigidity” is preventing people from getting Covid-19 shots and voiced frustration at the struggle to boost vaccination rates in parts of the country, Bloomberg reports.

Said Fauci: “It’s not an easy solution. We’ve got to get away from this divisiveness that has really been a problem right from the very beginning with this outbreak.”

New York Times: “Opposition to vaccines was once relegated to the fringes of American politics, and the rhetoric on Fox News has coincided with efforts by right-wing extremists to bash vaccination efforts… The comments by the Fox News hosts and their guests may have also helped cement vaccine skepticism in the conservative mainstream.”

“Served up to an audience that is more likely than the general population to be wary of Covid vaccines, the remarks by Mr. Carlson and Ms. Ingraham echoed a now-common conservative talking point — that the government-led effort to raise vaccination rates amounted to a violation of civil liberties and a waste of taxpayer dollars.”

Axios: “More than half of unvaccinated Americans live in households that make less than $50,000 annually.”

“President Joe Biden’s team is beginning to grapple with the possibility that the 2015 nuclear accord with Iran he promised to revive may soon be beyond saving,” Bloomberg reports.

“Hopes for a quick re-entry to the accord that Donald Trump abandoned have dimmed after six rounds of negotiations in Vienna, with little sign of when a seventh might start. The stalemate is compounded by Iran’s technological advances and the election of a new hard-line president, raising doubt about whether the agreement reached in 2015 would be sufficient to constrain the country’s nuclear ambitions anymore.”

“Treasury Secretary Janet Yellin says she will lead an effort by top U.S. regulators to assess the potential risk that climate change poses to America’s financial system, part of a wide-ranging initiative launched by the Biden administration,” the AP reports.

“Yellen says the regulatory review, which will be done by the Financial Stability Oversight Council, [which she chairs,] will examine whether banks and other lending institutions are properly assessing the risks to financial stability.”

“A consortium of international scientists found that the recent Pacific Northwest heat wave was implausible if not for climate change, but also that temperatures soared so high that they exceeded what scientists thought were statistically likely today,” the Seattle Times reports.

“Scientists pegged the heat wave as a 1-in-1,000-year event in today’s climate.”

“Tucker Carlson is furious with Fox News executives for not vigorously defending him amid his evidence-free claims that the National Security Agency spied on him in a conspiracy to destroy his TV show,” CNN reports.

However, Carlson denied the report when asked for comment: “I’m not mad at anyone at Fox. If I was, I’d say so. I’m mad at you for lying relentlessly. What a loathsome person you are. Please print that.”

Wall Street Journal: “Americans should brace themselves for several years of higher inflation than they’ve seen in decades, according to economists who expect the robust post-pandemic economic recovery to fuel brisk price increases for a while.”

“Economists surveyed this month by The Wall Street Journal raised their forecasts of how high inflation would go and for how long, compared with their previous expectations in April.”

Wall Street Journal : “Both pillars present tricky legislative challenges. They likely will move separately through Congress, but the international consensus rests on pairing them and completing both tasks.”

“The Biden administration will try to turn its drive for a tougher minimum tax into legislation this fall without Republican votes by using the budget reconciliation process that requires a simple Senate majority instead of the 60 votes needed for most bills. The White House would then attempt to change the international rules, perhaps through a treaty requiring Republican support.”

A Newsmax host suggested that coronavirus vaccines may be “against nature,” and asked a university professor if some deadly diseases are “supposed to wipe out a certain amount of people,” The Hill reports.

Said host Rob Schmitt: “Obviously, I’m not a doctor. But I’ve always thought about vaccines, and I always think about just nature and the way everything works. And I feel like a vaccination in a weird way is just generally kind of going against nature.”

He added: “Like, I mean, if there is some disease out there — maybe there’s just an ebb and flow to life where something’s supposed to wipe out a certain amount of people, and that’s just kind of the way evolution goes. Vaccines kind of stand in the way of that.”

The Informant: “An advisor for the influential conservative youth organization Turning Point USA recently published an essay for subscribers of his personal newsletter that, among other things, said Black people have ‘become socially incompatible with other races’ and ‘American Black culture has evolved into an un-fixable and crime-ridden mess.’”

“It also said white people aren’t racist but ‘just exhausted’ with Black people. It portrayed post-Civil War America as a 150-year-long ‘experiment’ to see whether Black people could be ‘taken from the jungles of Africa,’ enslaved, and then integrated into a majority-white society. It said that experiment had failed.”

Wall Street Journal: “A recent ZipRecruiter survey found 70% of job seekers who last worked in the leisure and hospitality industry say they are now looking for work in a different industry.”

“In addition, 55% of job applicants want remote jobs. An April survey of U.S. workers who lost jobs in the pandemic, conducted by the Federal Reserve Bank of Dallas, found that 30.9% didn’t want to return to their old jobs, up from 19.8% last July.”

“Another form of mismatch is geographic. Job openings and available workers are in different places, in part because people moved during the pandemic, and in part because business boomed in unexpected locales.”