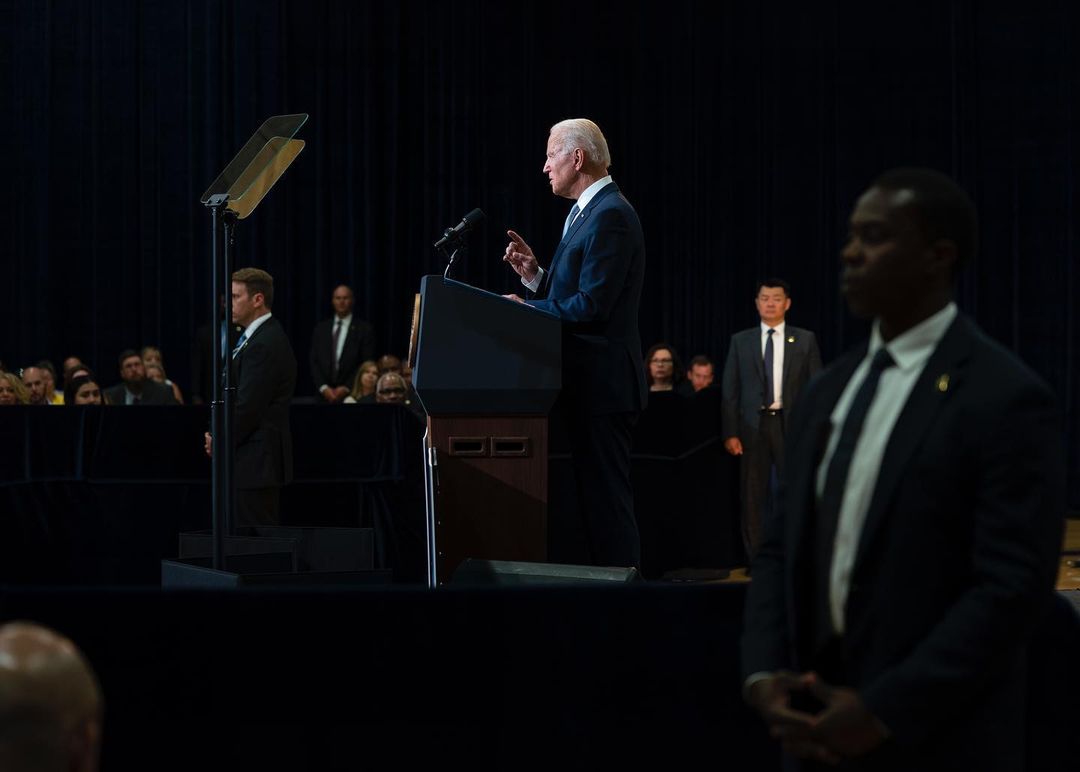 “Even though Stacey Abrams has not announced what her plans are for a 2022 rematch against Gov. Brian Kemp, you get the strong sense that Republicans can’t wait to run against her,” the Atlanta Journal Constitution reports.

“Look no further than Gov. Brian Kemp’s debut reelection campaign ad, which features a shadowy picture of Abrams and blames her specifically for the decision of Major League Baseball to move the All Star game — previously set to be staged in metro Atlanta next week.”

“Republicans in the Texas Legislature fully unveiled their plans to overhaul the state’s election apparatus, outlining a raft of proposed new restrictions on voting access that would be among the most far-reaching election laws passed this year,” the New York Times reports.

“The GOP bills, which will be debated in the coming days during the Legislature’s special session, largely resemble those from the Republicans’ initial attempt to pass a sweeping voting bill, which failed in the last legislative session after Democrats staged a late-night walkout.”

Nebraska Republican leaders have decided to take the party’s long-sought quest for voter photo ID requirements to a vote of the people, the Lincoln Journal Star reports.  The proposal would place the issue on the 2022 general election ballot in the form of a constitutional amendment.

“As Texas Republicans prepare to force votes next week on far-reaching legislation that would introduce new restrictions on voting, Democrats are left facing a gnawing question: Should they fight or flee?,” the New York Times reports.

“The issue dominated internal discussions on video calls among Democrats in the Texas Legislature this week as lawmakers began a special session, with an aggressive group of progressive members pushing for a repeat of the dramatic late-night walkout that ended the regular session in late May. The walkout denied Republicans a quorum and blocked a vote on the elections bill in the final hours.”

“But a more cautious coterie of Democrats, many of whom hold powerful leadership positions, have argued for staying and fighting the bill on procedural grounds.”

The Virginia Republican Party demanded an ethics investigation into the University of Virginia election forecaster Larry Sabato over his tweets that they say display “bitter partisanship” in favor of Democrats, the Washington Times reports.

Responded Sabato on Twitter: “Thanks to the Republicans for the hearty laugh you’ve given me. There goes my reserved seat at your next insurrection. Oh well.”

Loretta Smith (D) and Wesley Hunt (R) “are among a growing group of politicians from both parties who, because of a delayed release of the district-level data from the 2020 US Census needed for each state to complete the redistricting process, have announced congressional bids without knowing which district they will be running in,” CNN reports.

“The delay has created a unique set of announcements across the country, with people like Hunt announcing the area they plan to represent, but not the district or opponent they could face. Although many politicians are impacted by this delay, the feeling is particularly acute for first-time candidates and those challenging incumbents.”

“The reason neither are waiting is simple: Running for Congress as a challenger isn’t easy and the time it takes to build an organizing and fundraising operation is critical.”

VIRGINIA 7TH CD — 2020 candidate Tina Ramirez announced last week that she would once again seek the Republican nomination to take on Democratic Rep. Abigail Spanberger. Ramirez struggled to raise money for her last campaign and ended up taking third place in the party’s nominating convention. It remains to be seen how the GOP will choose their nominee next year, much less what this district will look like after the state’s independent redistricting commission completes its work.

NEW JERSEY 10TH CD — Progressive activist Imani Oakley, who previously worked as a staffer in the legislature, announced this week that she would take on Rep. Donald Payne in the Democratic primary for New Jersey’s 10th Congressional District, a safely blue seat in the Newark area. Politico notes that, while Payne has long been an underwhelming fundraiser, his name recognition and institutional support will make him very tough to beat.

Payne was elected in 2012 to succeed his late father, 12-term Rep. Donald Payne Sr. The younger Payne won the regular primary for this seat with 60% of the vote that year (he did even better in the special election primary that same day), and he hasn’t faced any serious opposition since then. Payne is also an ally of the local county parties, so he should have no trouble once again claiming their influential organization lines.

NEBRASKA 2ND CD –– Alisha Shelton, a Democrat who unsuccessfully ran for the Senate last year, announced this week that she would challenge GOP Rep. Don Bacon. Shelton would be Nebraska’s first Black member of Congress.

Shelton came in third with 23% in the 2020 primary for the upper chamber, but Nebraska Democrats disavowed the winner, businessman Chris Janicek, after he sent sexually explicit messages about a campaign staffer to a group text that included the aide. Team Blue’s leaders tried to convince Janicek to drop out so they could nominate Shelton in his place but he refused to budge, and he ultimately won just 24% of the vote against Republican Sen. Ben Sasse in November.

MONTANA 2ND CD — Attorney Monica Tranel, who was the Democratic nominee last year for a seat on the Public Service Commission, announced this week that she would run for Montana’s new, but as of yet undrawn, congressional district. Tranel, who rowed in the 1996 and 2000 Olympics, lost her 2020 contest by a close 52-48 margin for a district in the western part of the state that voted for Donald Trump 51-46 and Republican Gov. Greg Gianforte by 49-47.

Former state Sen. Al Olszewski, who unsuccessfully sought the GOP nomination for governor last year and Senate in 2018, kicked off a bid for Montana’s new congressional district on Thursday. While the state’s new map has yet to be drawn, Olszewski seems to think he’ll wind up in a primary with former Rep. Ryan Zinke, since he crashed out the gate attacking Zinke—who served in Donald Trump’s cabinet—as insufficiently Trumpy.

MISSOURI 4TH CD — Two more Republicans, state Rep. Sara Walsh and former Boone County Clerk Taylor Burks, have announced that they would seek this very red open seat in west-central Missouri. Walsh’s husband is the longtime press secretary for Rep. Vicky Hartzler, who is leaving the House to run for the Senate, though the incumbent has yet to take sides in the race to succeed her. Burks, meanwhile, was appointed county clerk in 2017 only to lose his general election the following year, but he quickly landed a job in state government in the labor department.

The race may get another new candidate before long, as Senate Majority Floor Leader Caleb Rowden said Wednesday that he would make his decision “shortly.”

MINNESOTA 1ST CD — Republican Rep. Jim Hagedorn announced Wednesday that his kidney cancer had returned, saying, “The new diagnosis was surprising considering that just 14 weeks ago no cancer was detected.” The congressman  added that he and his doctors were “very encouraged by a new FDA-approved cure that is available to attack this type of cancer.”

KENTUCKY 3RD CD — State Rep. Attica Scott, a vocal advocate for police accountability and one of the most progressive members of the state legislature, launched a primary challenge to Democratic Rep. John Yarmuth on Wednesday. Scott declined to offer any criticism of the incumbent, who has amassed a very progressive record of his own in Congress, saying, “This campaign is about the people of Louisville, and the people who are demanding and asking for different representation.”

After last year’s police killing of Breonna Taylor, a Black resident of Louisville, Scott, who is also Black, became a prominent leader in the protests that soon followed. She’s also pushed for a measure called “Breonna’s Law” that would ban the use of “no-knock” warrants, which has passed in other jurisdictions (including Louisville) but not yet in Kentucky. (A partial ban did become law earlier this year.) Taylor’s mother, Tamika Palmer, responded to Scott’s announcement by endorsing Yarmuth.

Scott has experience taking on long-time incumbents: She began her political career by knocking off conservative Democrat Tom Riner 54-31 in the 2016 primary for the state House seat she now represents. Yarmuth, however, is nothing like Riner, a religious extremist who championed a law requiring Kentucky’s Homeland Security department to post a plaque saying the state’s safety “cannot be achieved apart from reliance upon Almighty God.”

Republican state lawmakers could also “crack” the 3rd District and divide its parts between the deep red surrounding areas to create a new safe GOP seat for 2022, though Kentucky’s congressional Republicans claim they don’t want to see this happen.

WASHINGTON 8TH CD — Army veteran Jesse Jensen, who held Democratic Rep. Kim Schrier to a shockingly close 52-48 margin last year, has announced he’ll try a second time. Jensen’s performance came as a surprise because he was little-known, got badly out-spent by the incumbent, and attracted no major outside support from the likes of the NRCC yet managed to do slightly better than Schrier’s very prominent 2018 opponent, former state Sen. Dino Rossi. This time, though, Jensen faces intra-party competition from attorney Matt Larkin, who was the GOP’s nominee for attorney general last year and carried the 8th District 51-49 despite losing to Democratic incumbent Bob Ferguson 56-44 statewide.

FWIW: “Even in a world of TikTok challenges and IG Reels, Snapchat remains an effective advertising platform for campaigns and organizations to reach younger voters with quick vertical video and static content. Nearly half of Americans aged 15 – 25 still use the platform, and in 2020, political advertisers spent a record $21.2 million on Snapchat advertising attempting to reach them.”

“However, in the Biden era, that’s changed. Out of the nearly $2 million spent in 2021 thus far on Snapchat political ads, Republican ad spend only makes up around 0.1% – just around $2,500 spent by the RNC.”

TEXAS 24TH CD — Marine veteran Derrik Gay kicked off a bid against freshman Republican Rep. Beth Van Duyne on Tuesday, making him the first notable Democrat to do so. Gay, now a tax attorney, has not run for office before but says he’s been involved in Dallas-area campaigns. Van Duyne won a close election last cycle by defeating Democrat Candace Valenzuela 49-47, but her fellow Republicans will be eager to shore up her district, which Joe Biden carried by a 52-46 margin.