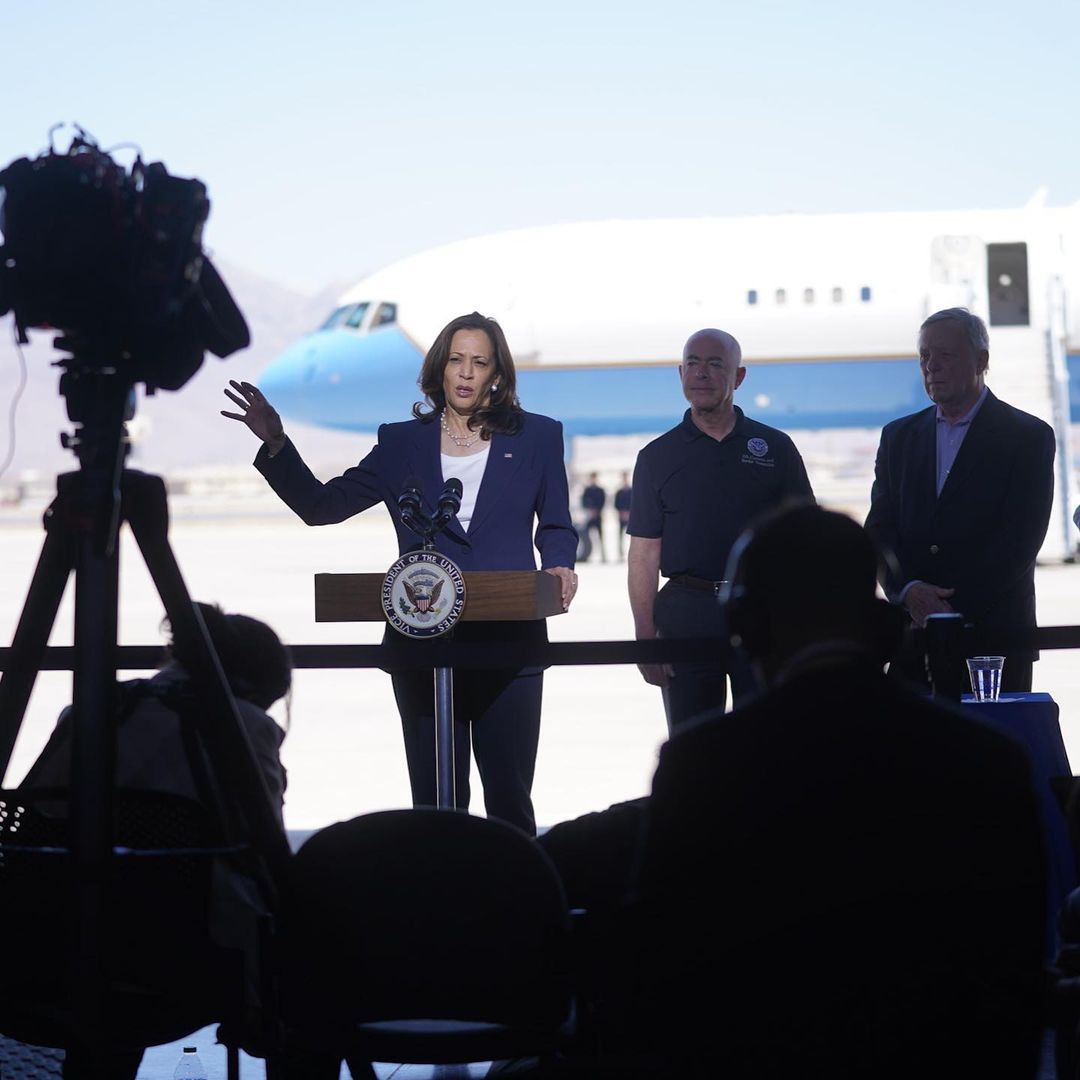 Toyota will cease donations to Republicans who objected to the certification of President Biden’s electoral college victory, the Detroit News reports.

Earlier, the Lincoln Project unveiled a TV ad attacking Toyota over its donations.

The Lincoln Project responds to the news: “We’re just getting warmed up.“

OHIO 11TH CD — Democratic Majority for Israel is out with an ad that goes after Democrat Nina Turner for her past criticism of the Democratic Party. The spot, part of a $278,000 buy, features a voiceover that runs through critical statements Turner has made about Hillary Clinton, Joe Biden, and the DNC.

Saffold favorably compares Brown to her daughter, saying that she’ll “continue her legacy in Congress.” Fudge’s mother also claims that she’s endorsing Brown, rather than Fudge herself, because “Marcia now serves in President Biden’s cabinet, so she can’t endorse in the race for Congress.”

But such an endorsement is by no means unheard of: Biden’s interior secretary, Deb Haaland, backed Rep. Melanie Stansbury in last month’s special election in New Mexico, and Trump cabinet secretaries Tom Price and Ryan Zinke endorsed their preferred successors in the races to replace them in Congress in 2017.

Brown also unveiled an endorsement Thursday from the American Federation of Teachers ahead of the Aug. 3 Democratic primary.

Adams’ narrow victory came in the eighth and final round of ranked-choice tabulations, in which he defeated Garcia 50.5% to 49.5%. Garcia’s hopes had rested on absentee votes, which were not tallied until Tuesday, but they only narrowed the gap slightly from the 51.1-48.9 lead Adams enjoyed a week earlier, when the first ranked-choice results were released (sans absentees). Mail-in votes had a bigger impact in the seventh round, when Garcia eliminated attorney Maya Wiley by more than 12,000 votes; the initial ranked-choice tabulations had Garcia ahead just 347 votes in the penultimate round.

It was heavy support from Wiley voters that almost allowed Garcia to make up the gap with Adams, which stood at 41-30 in the seventh round, with Wiley at 29: 51% of Wiley’s votes went to Garcia in the last round while just 20% went to Adams. (The rest were “exhausted,” meaning that those voters either didn’t make a choice after Wiley, only chose candidates that had already been eliminated, or picked Wiley as their fifth and final choice.) But as Inside Elections’ Ryan Matsumoto noted, absentees “skewed more towards” fourth-place finisher Andrew Yang, whose voters split more evenly in their alternate preferences, with 32% for Garcia and 28% for Adams (as well as 11% for Wiley and 29% that were exhausted).

Ranked-choice nerds will additionally want to take note that the absentees also reduced the total number of rounds required to resolve the election, from nine to eight. Under a process called “batch elimination,” which requires the Board of Elections to eliminate multiple candidates in a given round if it’s mathematically impossible for any to advance, four minor candidates were eliminated in the fourth round. Previously, those eliminations were split two and two over the fourth and fifth rounds.

SYRACUSE MAYOR — Democrats last week learned the identity of their general election nominee after Michael Greene conceded to Khalid Bey, a fellow member of the Syracuse Common Council. With almost all votes counted, Bey prevailed 50.3-49.7—a margin of 36 votes—in the primary to take on independent Mayor Ben Walsh this November.

Bey would be the city’s first Black mayor, but he’ll be in for a challenging race. While Joe Biden carried Syracuse 77-21, Walsh won his 2017 race by defeating Democrat Juanita Perez Williams, who would go on to unsuccessfully compete in the primary for the 24th Congressional District the next year, by a wide 54-38 margin. Walsh also begins the general with almost $400,000 on-hand compared to less than $3,000 for Bey. The race also includes Republican Janet Burman, though she may not make much of an impact in a city where the last GOP mayoral nominee secured just 3% of the vote.

BUFFALO MAYOR — Incumbent Byron Brown announced last week that he would wage a write-in campaign this November against India Walton, a self-described socialist who defeated him in a huge Democratic primary upset last month, but the four-term mayor hasn’t attracted much big name support so far.

While Erie County Democratic Chairman Jeremy Zellner supported Brown in the primary, he reaffirmed that his organization would back Walton now that she’s the nominee. Erie County Executive Mark Poloncarz also said he was for Walton, and he also took the time to bash Brown’s primary campaign. “You’re responsible for your campaign. You’re responsible for the efforts associated with running for office,” said Poloncarz, adding, “The mayor acted as if he had already been elected, and the people of Buffalo spoke in the Democratic primary.”

Other prominent Democrats have so far remained neutral including Gov. Andrew Cuomo, who previously chose Brown to lead the state party. The governor has so far refrained from saying anything about the general, though current party chair Jay Jacobs told the Buffalo News, “I cannot imagine any circumstances in which the governor will interfere in an election like that under these conditions.” Jacobs also threw some shade at the mayor, saying, “But there is no question she [Walton] won the primary against someone who is a very good mayor and a very good friend who, unfortunately, did not wage a campaign required by the times.”

Brown does have the backing of three of the nine members of the local city council, the Buffalo Common Council, though they seem to be the only local elected officials in his corner.

OHIO 15TH CD — Protect Freedom PAC, which is run by allies of Kentucky Sen. Rand Paul, is spending at least $200,000 to promote former state Rep. Ron Hood ahead of the Aug. 3 Republican primary. Hood, as Inside Elections’ Jacob Rubashkin notes, gained national infamy in 2019 when he introduced a bill that would force doctors who performed an abortion to either face murder charges or “reimplant” an ectopic pregnancy, a procedure that the American College of Obstetricians and Gynecologists says is impossible.

The ad, other than a brief line about how Hood “protected the unborn,” doesn’t get into any of those ugly details, though, and instead breaks out the bad puns early. The narrator compares Hoods’ opponents to used car salesmen before imploring viewers to “look under the Hood.” He then goes on to portray the candidate as a “proven Trump conservative” without noting that Trump himself is supporting another contender, coal company lobbyist Mike Carey.

GEORGIA 6TH CD — Army veteran Eric Welsh, who launched a campaign for the GOP nomination just two months ago, has now dropped his bid, citing the demands of his business. His departure leaves Republicans with one other notable candidate who also happens to be an Army veteran, Harold Earls, in the race to take on Democratic Rep. Lucy McBath. Earls, though, has said he might switch to the neighboring 7th District if Republicans make it redder in redistricting.

NEW JERSEY 3RD CD — Republican Assemblywoman Serena DiMaso isn’t ruling out a challenge to Democratic Rep. Andy Kim, according to a spokesperson who told the New Jersey Globe, “All things are possible.” DiMaso, however, is not on happy terms with the local GOP: Republican power-brokers in Monmouth County endorsed a challenger, Holmdel School Board president Vicky Flynn, after DiMaso repeatedly “butted heads with” county GOP chair Shaun Golden; Flynn wound up knocking off the incumbent in June’s primary.

So far, Republicans have yet to land a major contender to take on Kim, with only Mount Holly (pop. 10,000) school board member Will Monk and 2020 Senate candidate Tricia Flanagan, who took just 18% in the primary, declaring so far.

OHIO 1ST CD — Businessman Gavi Begtrup, who finished a distant fourth with 10% in Cincinnati’s nonpartisan mayoral primary in May, says he’s considering a bid against Republican Rep. Steve Chabot in Ohio’s 1st Congressional District. So far, Democrats have yet to land a notable candidate here.

MARYLAND 2ND CD — Progressive activist Brittany Oliver, who runs an advocacy group called Not Without Black Woman, has launched a primary challenge against Democratic Rep. Dutch Ruppersberger, saying, “The district is diverse and the representation on the Hill needs to reflect that.” Maryland’s 2nd Congressional District, located in the Baltimore suburbs, has in fact grown steadily more diverse in recent years and is now home to a 49% white plurality, with 35% of residents identifying as Black, 7% Latino, and 5% Asian American. Ruppersberger, who is white, has regularly faced primary opponents during his two-decade career, though he’s never won renomination with less than 73% of the vote.

NEW HAMPSHIRE 1ST CD — Freshman state Rep. Tim Baxter has announced a bid for New Hampshire’s 1st Congressional District, making him the second notable Republican in the race after Marine veteran Julian Acciard. GOP lawmakers in the state capitol have telegraphed their intention to make this district, currently represented by Democratic Rep. Chris Pappas, more favorable for their side in redistricting.

Michelle Goldberg: “White evangelicals once saw themselves ‘as the owners of mainstream American culture and morality and values.’ Now they are just another subculture.”

Said pollster Robert Jones: “It’s hard to overstate the strength of this feeling, among white evangelicals in particular, of America being a white Christian country. This sense of ownership of America just runs so deep in white evangelical circles The feeling that it’s slipping away has created an atmosphere of rage, resentment and paranoia.”

NEW YORK 12ND CD — Voting rights advocate Maya Contreras has joined the primary for New York’s 12th Congressional District, solidly blue turf based on Manhattan’s East Side that has seen competitive primaries in each of the last two elections. She joins nonprofit founder Rana Abdelhamid in the race against Rep. Carolyn Maloney, who has said she’s seeking re-election after a tight 43-39 escape in last year’s primary.

NEW YORK 23RD CD — Steuben County GOP chair Joe Sempolinski has entered the race for New York’s 23rd Congressional District, which is open—to the extent that it survives in its current form—thanks to Republican Rep. Tom Reed’s retirement following an accusation of sexual misconduct. But with Democrats likely to control the fate of New York’s next congressional map, it’s eminently possible that the 23rd could wind up significantly bluer or be outright eliminated and upend the plans of Republican politicos.