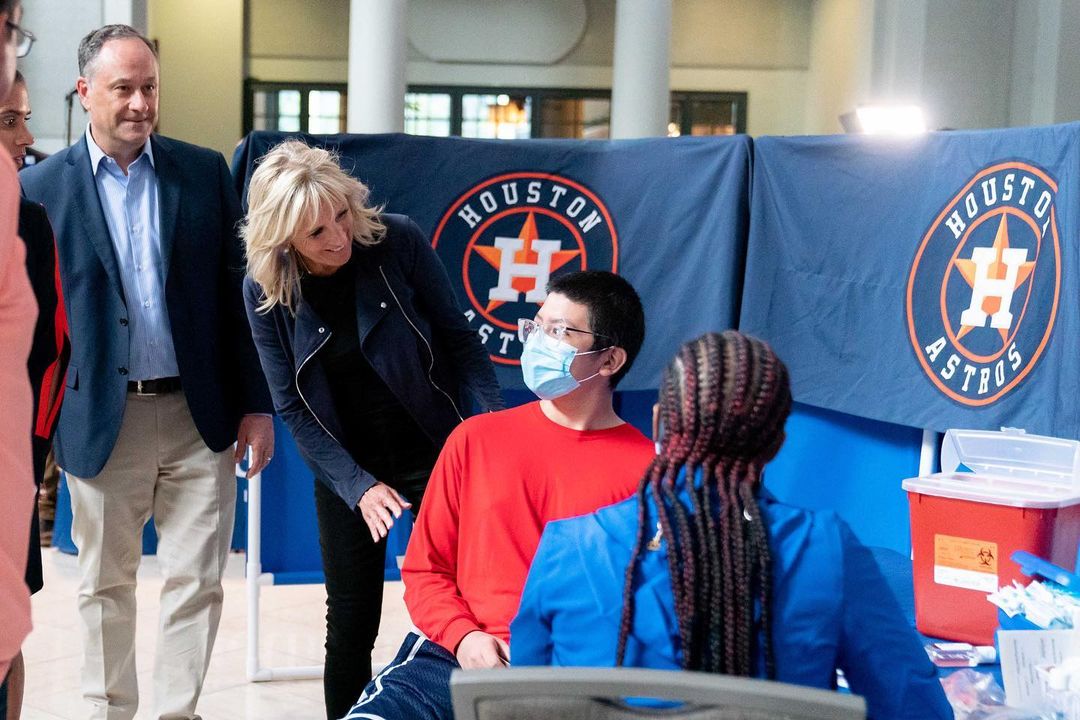 A new Politico/Harvard poll finds 52% of Americans now believe that the coronavirus leaked from a laboratory in China, while 28% said it was from an infected animal.

Texas Gov. Greg Abbott (R) “is starting his 2022 reelection campaign with $55 million in the bank, a staggering figure even by the already high standards for which his fundraising is known,” the Texas Tribune reports.

COLORADO U.S. SENATOR / GOVERNOR — The Colorado Sun takes a look at the GOP’s potential fields for Senate and governor, though there aren’t a whole lot of new names on either list. The Sun notes that while a GOP source argued that Sen. Michael Bennet and Gov. Jared Polis could be in for tough re-elections, his contact “didn’t—couldn’t?—name a single Republican who might be able to take advantage of the headwinds that he sees for Democrats.”

In the Senate race, some Republicans “are encouraging” former state Rep. Clarice Navarro to run, but there’s no word on her interest. Navarro, though, is currently serving as the district director for none other than far-right extremist Rep. Lauren Boebert, which is not likely to be a resume asset in a state that Joe Biden carried 55-42.

Speaking of Boebert, Bennet’s team always asks if there’s any chance that the congresswoman will run, but that prospect is described as a “longshot.” There’s also no sign she’s at all interested in a statewide race, though the Sun notes that “no one knows what Boebert will do or say at any moment.” The Democratic firm Global Strategy Group did recently test out that extremely hypothetical scenario in their poll for ProgressNow Colorado and found the incumbent ahead 51-38.

Turning to the gubernatorial contest, the Sun says that George Brauchler, who was the Republican 2018 nominee for attorney general, “is sometimes said to be considering a run.” Brauchler originally entered that year’s governor race before dropping down to attorney general, but he ultimately lost 52-45.

PENNSYLVANIA U.S. SENATOR — Political consultant Craig Snyder recently filed paperwork with the FEC for a potential bid for the GOP nomination, but he hasn’t committed to the race yet. Snyder founded a PAC in 2016 to support Hillary Clinton and has remained ardently anti-Trump since then, so he may not be much of a factor if he does get in.

ALASKA GOVERNOR — Former Democratic state Rep. Les Gara announced Wednesday that he had formed an exploratory committee for a potential bid against Republican Gov. Mike Dunleavy, and he said that he hopes to decide whether to run by the end of summer. Gara, who retired in 2018 after 16 years in the legislature, is the first notable Democrat who has taken any steps toward running.

Dunleavy’s detractors were hoping they’d get the chance to oust him from office well before the 2022 election, but it’s unclear how close pro-recall forces are to collecting enough signatures to force a vote. The deadline for the Recall Dunleavy campaign to turn in the 71,000 valid petitions they’d need isn’t until early June of next year, but their efforts were dramatically slowed by the pandemic.

Recall Dunleavy said in late April that it had collected 58,000 signatures, but there have been no updates since then. Campaign chair Meda DeWitt told the Associated Press this week that the group was looking over its petitions to “make sure we know what we have, very specifically,” and she said recall leaders would meet soon and provide more information about their efforts. DeWitt added, “Can I tell you that we’re going to submit all of our signatures to the Division of Elections on X-day? No, I cannot tell you that right now.”

MASSACHUSETTS GOVERNOR — Republican Gov. Charlie Baker said Wednesday that he’d decide “soon” whether or not he’d seek a third term, though he didn’t hint which direction he was leaning. Baker’s fundraising has been slow for much of the last year, though observers noted that his nearly $91,000 haul from June was dramatically larger than the $3,400 he brought in during the previous month.

MICHIGAN GOVERNOR — While businesswoman Lena Epstein, who was the 2018 Republican nominee for Michigan’s 11th Congressional District, has occasionally been mentioned as a potential gubernatorial candidate, she said this week that she wanted former Detroit Police Chief James Craig to run.

MISSOURI U.S. SENATOR — Powerful Republicans have made it clear that they’re willing to take action to prevent Missouri’s disgraced former governor, Eric Greitens, from winning next year’s Senate primary, but one familiar megadonor is using his largesse to help Greitens. That potentate, reports Politico, is Richard Uihlein, who has contributed $2.5 million to a newly-formed pro-Greitens group called Team PAC.

Uihlein, a major supporter of the radical anti-tax Club for Growth, has regularly used his wealth to aid his favored Republican candidates in primaries and general elections across the country, including those whom the party establishment wants to stop.

Most notably, Uihlein gave $2.5 million to support Illinois state Rep. Jeanne Ives’ longshot primary bid against Gov. Bruce Rauner in 2018. That contribution, which accounted for the vast majority of Ives’ budget, allowed her to air ads against the wealthy incumbent, including an infamous racist and transphobic spot. Ives ended up losing, but only by a shockingly slim 3-point margin.

Rauner went down to brutal defeat that fall, so the GOP almost certainly would have lost control of Illinois’ governorship even if Uihlein hadn’t intervened, but the stakes in Missouri could be far higher. While the Show Me State has become solidly Republican turf in recent years, allies of Senate Minority Leader Mitch McConnell fear that Greitens could jeopardize Republican hold over this Senate seat if he’s their nominee.

It would still be difficult for even a Republican as toxic as Greitens to lose a general election in Missouri, but power-brokers who remember the 2012 Todd Akin debacle aren’t eager to find out. Longtime party strategist Karl Rove, who remains an influential figure in GOP politics, predicted in April that “Democrats, fair or unfair, are going to take him apart.”

McConnell and his allies have shown time and again that they’re willing to spend in order to stop anyone they perceive as unelectable from winning a primary, though they’ve had many high-profile setbacks—and Uihlein’s early investment means that the stakes in Missouri just got higher.

OKLAHOMA U.S. SENATOR — Pastor Jackson Lahmeyer’s Republican primary campaign against Sen. James Lankford was a pretty low-key affair before late June, but that started to change when party chair John Bennett announced that he was supporting the challenger. While Bennett said he wasn’t making his endorsement in his official capacity, he didn’t hold back when he told reporters that Lankford deserved to lose because he refused to object to certifying Joe Biden’s electoral college majority in the hours after the Jan. 6 attack.

Lankford has otherwise been a devoted Trump ally, and he’d originally echoed Trump’s lies about the 2020 election. Lankford had even planned to object to Biden’s victory on Jan. 6, but he ended up reversing himself after the terrorist riot.

The senator soon wrote a letter to African American constituents where he said his earlier comments about the election had “caused a firestorm of suspicion among many of my friends, particularly in Black communities around the state.” He continued by acknowledging the country’s ugly history of anti-Black voter suppression and added, “I should have recognized how what I said and what I did could be interpreted by many of you. I deeply regret my blindness to that perception, and for that I am sorry.”

All of this, though, went over poorly with Lahmeyer, a first-time candidate who will turn 30 before Election Day. “I watched James from November the 3rd to January the 6th just flip-flop like a fish out of water,” Lahmeyer argued, adding, “And then, on January the 6th, he caved like an absolute coward.” The challenger also said that the senator’s message to Black constituents was the final push he needed to get him to run.

Lahmeyer’s campaign didn’t attract much outside attention, though, until Bennett threw his endorsement behind him. Lankford himself acknowledged this week it was “highly unusual for a state party chair in any state in America to come out and say, ‘I’m not going to at least be neutral.”

It remains to be seen how much Lahmeyer or Bennett, who won the state party chair post in April, represents the thinking of their party, much less the primary electorate, but Lankford may get a clue soon: The state party is set to consider a censure resolution against the senator on July 17.

GOP 2024 — New York Times: “If Gov. Ron DeSantis of Florida is widely seen as the brash heir apparent to Mr. Trump, and senators like Josh Hawley and Tom Cotton are attempting to put a more ideological frame on Trumpism, Ms. Noem is trying to cement her place as the only female Trump ally echoing the former president’s trigger-the-left approach among the upper tiers of potential 2024 candidates.”

Associated Press: “Fifteen months before the midterm elections, groups … are mobilizing across the country — both Democrats who have enjoyed a historic Latino allegiance and Republicans emboldened by gains in 2020 — all trying to lock down the fastest growing segment of the U.S. population.”

“The stakes are high, particularly for Democrats who are counting on Latino votes as a vital part of a winning coalition for cycles to come.”

“Many people who spout QAnon’s false claims have hatched a new plan: run for school board or local office, spread the gospel of Q, but don’t call it QAnon,” NBC News reports.

“The movement comes as many local meetings have emerged in recent months as cultural flashpoints in a broader battle over the perceived encroachment of race-conscious education — sometimes separately lumped together under the label critical race theory. In California and Pennsylvania, people who previously espoused QAnon have run for school board positions, sometimes melding conspiracy theories with anti-CRT sentiment.”

Michael Wolff claims in his new book, Landslide, that Rupert Murdoch made the final decision for Fox News to call Arizona for Joe Biden during the 2020 presidential election, a move that infuriated Donald Trump, Insider reports.

When Lachlan Murdoch, the CEO of Fox Corporation, called his father on whether to make the early call, “his father, with signature grunt, assented,” and added, “Fuck him.”