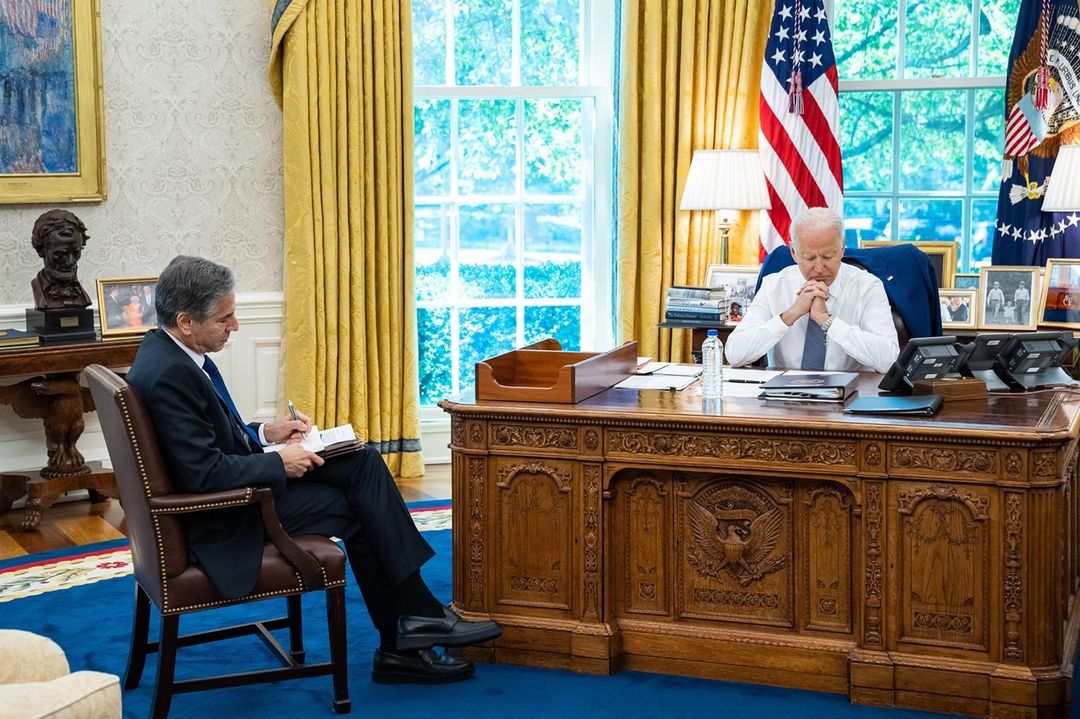 “Democrats are hurtling toward their most consequential stretch of legislating since the passage of Obamacare, with major decisions left unmade as they wrangle over the size and scope of President Joe Biden’s sweeping domestic agenda,” Politico reports.

“July and August will render a decisive verdict on Democrats’ so-called ‘two-track’ strategy of enacting Biden’s jobs and families plans via twin bills, one with GOP support focusing on physical infrastructure and the other on a partisan spending plan centered on fighting climate change, increasing child care and raising taxes on corporations and the wealthy.”

“Work on both items is nearing a climax, with senators in both parties drafting that centrist bill for a July Senate vote and the Senate’s 50 Democrats haggling over how big to go in their own, party-line endeavor.”

Senate Majority Leader Charles Schumer (D-NY) warned colleagues “to be prepared to work long nights, over the weekends and into the scheduled August recess so that they can finish work on a bipartisan infrastructure bill and a budget resolution,” The Hill reports.

“The White House is scheduled to issue an executive order Friday to promote competition throughout the U.S. economy in the most ambitious effort in generations to reduce the stranglehold of monopolies and concentrated markets in major industries,” Politico reports.

“The order offers a response to progressives’ criticisms that the federal government has focused too much on supporting banks and other corporations without concern about the effect on consumers, who have watched their choices dwindle over the years. … The order’s impacts could be felt in industries including agriculture, airlines, health, broadband and banking.”

“President Biden will push federal regulators to crack down on noncompete clauses, occupational licensing requirements and other measures that administration officials say hurt workers’ ability to pursue better jobs, as part of a broad executive order meant to bolster competition across the economy,” the New York Times reports.  “The efforts to increase competition in the labor market, according to a person familiar with them, will be detailed in an order issued in the coming days.”

Rep. Kevin Brady (R-TX) said he thinks it will be challenging for Congress to sign off on an international tax deal, The Hill reports. Said Brady: “I’m confident that Congress will reject any tax agreement that advantages foreign companies and workers over U.S. companies, or surrenders a key part of America’s tax base that we’ll need frankly to pay for our government services going forward.”

Former president Donald Trump, who agreed to sit for at least a dozen interviews in recent months for forthcoming books about his tenure, said that he considered doing so “a total waste of time,” the Washington Post reports.

Said Trump: “It seems to me that meeting with authors of the ridiculous number of books being written about my very successful Administration, or me, is a total waste of time… These writers are often bad people who write whatever comes to their mind or fits their agenda. It has nothing to do with facts or reality.”

Former Vice President Mike Pence reportedly “lost it” and “snarled” at former President Donald Trump after getting a crumpled up newspaper article thrown at him which reported that his political committee hired Trump adviser Corey Lewandowski in 2018, the Wall Street Journal reports, in an excerpt of Frankly, We Did Win This Election.

“Mr. Pence picked up the article and threw it back at Mr. Trump. He leaned toward the president and pointed a finger a few inches from his chest. ‘We walked you through every detail of this,’ Mr. Pence snarled. ‘We did this for you — as a favor. And this is how you respond? You need to get your facts straight.’”

Rep. Marjorie Taylor Greene (R-GA) rebuked the conspiracy theory that former President Donald Trump will be reinstated, Newsweek reports.  Said Greene: “I would hate for anyone to get their hopes up thinking that President Trump is going to be back in the White House in August because that’s not true and I’m telling you that as a member of Congress, that’s a very difficult thing to do.”

The Economist: “At the very least, the civil war is likely to intensify, as the Taliban press their advantage and the government fights for its life. Other countries—China, India, Iran, Russia and Pakistan—will seek to fill the vacuum left by America. Some will funnel money and weapons to friendly warlords.”

“The result will be yet more bloodshed and destruction, in a country that has suffered constant warfare for more than 40 years. Those who worry about possible reprisals against the locals who worked as translators for the Americans are missing the big picture: America is abandoning an entire country of almost 40m people to a grisly fate.”

“The Taliban claimed on Friday that they now control 85% of Afghanistan’s territory amid a surge in wins on the ground and as American troops complete their pullout from the war-battered country,” the AP reports.

Sen. Lindsey Graham (R-SC) called President Biden’s decision to complete the withdrawal of all U.S. troops from Afghanistan at the end of next month a “disaster in the making.”

Again, the alternative is that we stay there forever. No. If Afghanistan cannot fight for itself after 20 years and trillions of American taxpayer dollars, then they deserve their own fate.

New York Times: “People across the country may soon be able to sue abortion clinics, doctors and anyone helping a woman get an abortion in Texas, under a new state law that contains a legal innovation with broad implications for the American court system.”

“The result is a law that is extremely difficult to challenge before it takes effect on Sept. 1, because it is hard to know whom to sue to block it, and lawyers for clinics are now wrestling with what to do about it.”

“Pfizer is about to seek U.S. authorization for a third dose of its COVID-19 vaccine, saying Thursday that another shot within 12 months could dramatically boost immunity and maybe help ward off the latest worrisome coronavirus mutant,” the AP reports.

“A new data analysis identifies clusters of unvaccinated people, most of them in the southern United States, that are vulnerable to surges in Covid-19 cases and could become breeding grounds for even more deadly Covid-19 variants,” CNN reports.

“The five clusters are largely in parts of eight states, starting in the east in Georgia and stretching west to Texas and north to southern Missouri. The clusters also include parts of Alabama, Arkansas, Louisiana, Oklahoma and Tennessee, and are made up of mostly smaller counties but also cities such as Montgomery, Alabama; Shreveport, Louisiana; and Amarillo, Texas.”

“It has been three days since President Biden announced an initiative to send people door-to-door trying to get more people vaccinated, and Republicans and their conservative media allies have wasted no time turning those door-knockers into terrifying straw men,” the Washington Post reports.

“To be clear, there are valid questions about whether this is a good idea or the best use of government resources. But the pushback from some portions of the right has been swift and often over the top — to the point where it could very logically lead to some ugly scenes.”

A new Kaiser Family Foundation study finds that on April 22 the vaccination rate gap between counties that voted for Joe Biden versus Donald Trump was just 2.2 percentage points — 22.8% in Biden counties versus 20.6% in Trump counties.

“The indictment filed last week against the Trump Organization and its long-time chief financial officer Allen Weisselberg isn’t heavy on names, but there’s one major exception: a list of seven Trump Organization companies—including one where Ivanka Trump held an executive role for eight years,” the Daily Beast reports.

“While it’s impossible to know what charges are still to come, legal experts say the indictment for Weisselberg last week suggests bigger targets are in line, potentially including the former president’s adult children.”

“Michigan’s chief law enforcement officer, along with state police, will launch an investigation into those who have allegedly peddled disinformation about the state’s Nov. 3 election for their own financial gain,” the Detroit Free Press reports.  “A Republican-led report that found no evidence of widespread fraud recommended the probe.”

Wisconsin Gov. Tony Evers (D) vetoed a bill that could have made it more difficult for the public to get records about lawmakers who are disciplined or accused of sexual harassment, the Milwaukee Journal Sentinel reports.  “The measure, which was passed unanimously by Democrats and Republicans in the state Legislature, would have formally created a human resources office for the state Legislature and specified disciplinary records and complaints against lawmakers should be treated confidentially.”

President Joe Biden will deliver remarks in Philadelphia on Tuesday about his administration’s actions “to protect the sacred constitutional right to vote,” NBC News reports.

Washington Post: “White House officials have helped craft an agreement under which purchases of Hunter Biden’s artwork — which could be listed at prices as high as $500,000 — will be kept confidential from even the artist himself, in an attempt to avoid ethical issues that could arise as a presidential family member tries to sell a product with a highly subjective value.”

“A key figure in the ongoing federal sex-crime investigation into Rep. Matt Gaetz is seeking to delay his sentencing as he continues to cooperate with prosecutors,” Politico reports.   “Joel Greenberg, a former Seminole County tax collector who in May pleaded guilty to sex trafficking and corruption-related charges, requested in a motion filed Tuesday a delay in his sentencing, which is scheduled for August 19. Prosecutors are not opposing the motion, court records show. He faces a minimum of 12 years in prison.”