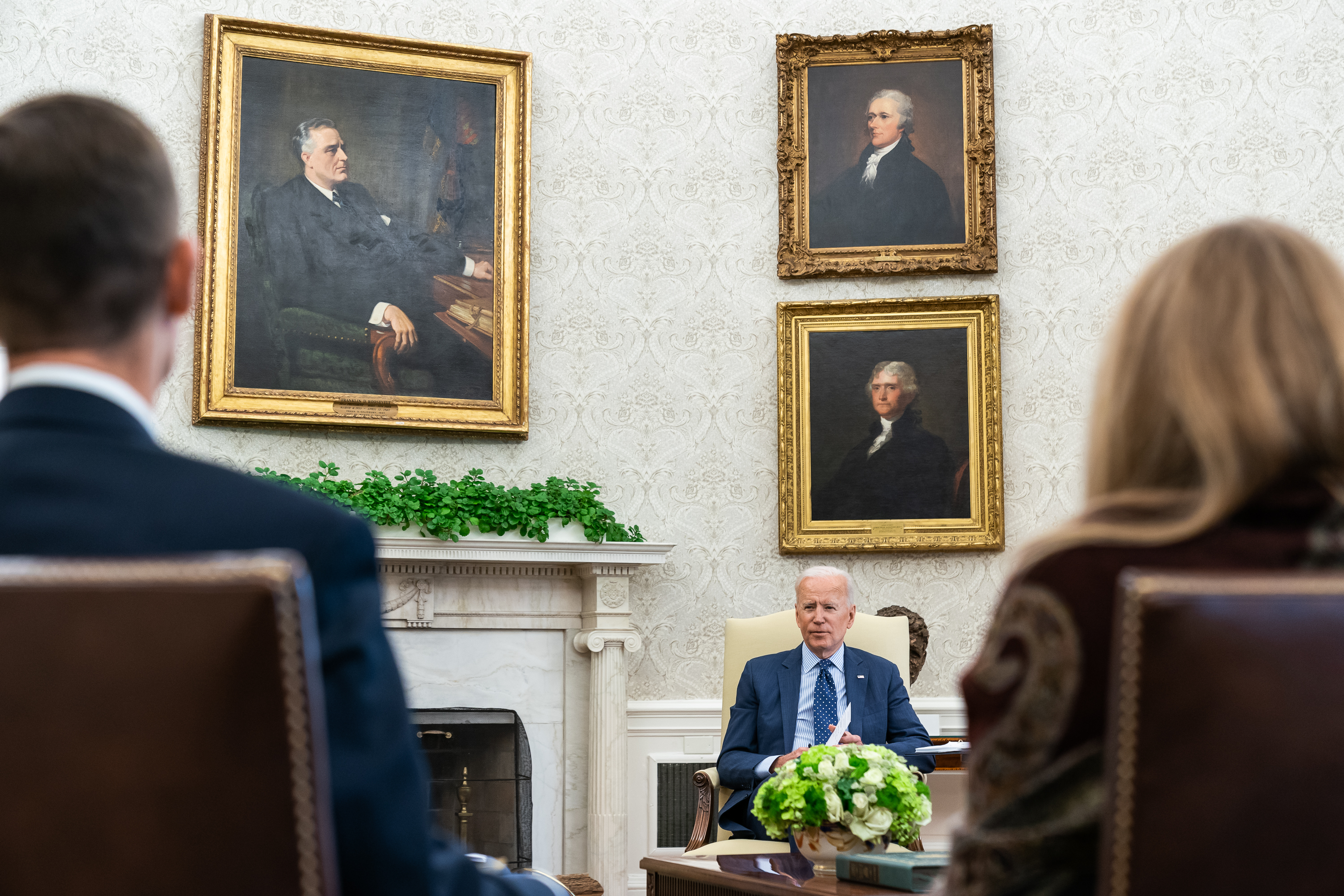 A new Washington Post-ABC News poll finds 62% of Americans say they approve of the job President Biden has done in dealing with the pandemic, almost identical to findings in April as he neared the end of his first 100 days in office.

His overall approval stands at 50% positive and 42% negative, figures that are also virtually the same as in April.

One low mark for the president comes on the issue of immigration at the U.S.-Mexico border, where 33% of Americans say they approve of how he is handling the issue, amid a surge of migrants attempting to cross into the country.

Jonathan Bernstein: “Joe Biden’s approval rating fell to its lowest point during his presidency last month, and he exits the July 4 holiday weekend at just 51.9% approval, close to that June low (as usual, I’m using the excellent FiveThirtyEight estimate, based on an adjusted average of all the reputable polls). At the same time, it’s just as likely that Biden’s popularity is holding steady rather than actually slipping. He remains in a narrow range, between a high of 55.1% approval and a low of 51.7%. It’s possible he’s fallen a bit; it’s also possible that his approval rating has been unchanged from Jan. 20 and that any apparent fluctuations are just statistical noise.”

“Either way, Biden’s numbers place him right about in the middle of recent presidents. At the 166-day point in their presidencies, he’s beating four presidents from the polling era: Donald Trump, Gerald Ford, Bill Clinton and, by a very narrow margin, George W. Bush. The other nine polling-era presidents are all beating him. What distinguishes Biden continues to be how flat his approval line is. Every previous president except Trump had either started his presidency above 60% approval or had spiked up to that level at some point by now. And they all had a larger range observed in the polls at this point; Ronald Reagan, for example, had already experienced a 17-percentage-point surge and then a 10-point drop.”

Said Vance: “I ask folks not to judge me based on what I said in 2016, because I’ve been very open that I did say those critical things and I regret them, and I regret being wrong about the guy. I think he was a good president, I think he made a lot of good decisions for people, and I think he took a lot of flak.”

Said Trump: “In Montana, over 6 percent of a certain county’s mail-ballots are missing, evidence to prove that if they were legitimate or not, that they’re missing. All this evidence. Think of it, Montana. You know, a lot of mail-in ballots. Where you have mail-in ballots.”

But the Montana Secretary of State Christi Jacobsen (R) says it’s not true and that all ballots are accounted for.

GEORGIA U.S. SENATOR — Atlanta Journal-Constitution: “Herschel Walker hasn’t lived in Georgia for decades. He’s never held public office, doesn’t attend the sort of Republican events that are mainstays on the political calendar and has bypassed the backslapping fundraising circuit that helps decide winners and losers in the state’s premier races.”

“Walker’s potential candidacy triggers more questions than a conventional candidate would face, some more freighted than others. His history of mental illness, including violent episodes he’s publicly addressed, will be invoked by rivals from both sides of the party divide.”

“Some privately complained that Walker wouldn’t return their calls or griped that the drawn-out process would hurt the party in the long run, particularly if he has second thoughts and decides against announcing.”

REDISTRICTING — Texas Observer: “The GOP enters this redistricting cycle with the least legal restraint of its reign, while the political incentives to push the partisan limits of its maps are immense.”

“While the party remains dominant at the state level, the power of its predominantly Anglo, rural base has diminished. The state’s big cities have become increasingly Democratic strongholds; the once ruby-red suburbs now range from fuchsia to lavender.”

“Now, GOP leaders want to refresh the maps in ways that further extend the political shelf life of their pale, aging, and disproportionately rural electorate while clawing back recent Democratic gains.”

“There’s an old saying: Pigs get fat. Hogs get slaughtered. When it comes to redistricting, that is the case.” — Rep. Patrick McHenry (R-NC), quoted by Politico, warning of possible overreach by Republicans.

“Rep. Jim Cooper (D-TN) has represented Nashville in the House for nearly 20 years, and a nearby district before that for another dozen, serving in Congress longer than anyone else in Tennessee,” CNN reports.

“But Republicans are now considering breaking up Cooper’s district, which could help them gain another crucial seat in the House, where Democrats hold only a four-seat margin. With complete control of the state legislature, Tennessee Republicans could change the state’s House delegation from seven Republicans and two Democrats to eight Republicans and one Democrat based in Memphis.”

TEXAS GOVERNOR — “Allen West, who recently stepped down as the chair of the Texas Republican Party, announced Sunday he is running for governor of the state,” Politico reports.

“West’s candidacy puts him on a collision course against incumbent Gov. Greg Abbott, a fellow Republican. West has frequently been critical of Abbott, even during his time as state party chair.”

A new Dallas Morning News poll in Texas finds Gov. Greg Abbott (R), after trailing potential challenger Matthew McConaughey in the spring, has rebounded and now has a slight — but not statistically significant — lead over the movie star in a hypothetical matchup in next year’s race for governor, 39% to 38%.

MASSACHUSETTS GOVERNOR — Former Massachusetts state Rep. Geoff Diehl (R), who challenged Sen. Elizabeth Warren (D-MA) in 2018, announced that he is running for governor, making him the first Republican to enter the race, the Boston Globe reports.

Diehl’s bid sets up a possible primary faceoff with Gov. Charlie Baker (R), who has not definitively said whether he will seek a third term. If Baker stays out of the race, many expect Lt. Gov. Karyn Polito (D) would seek the Republican nomination.

The Hill: “The 2022 elections are still more than a year away, but congressional Republicans are wrestling with their strategy: Rally behind a central message — complete Donald Trump’s wall and stop the surge of migrants crossing the southern border — or attack President Biden and Hill Democrats on a broad range of disparate issues, from socialism, “defund the police,” and inflation to China and critical race theory.”

“At the moment, that 2022 strategy is in flux, with some Republicans warning that a narrower message, one focused on the border and economy, is the key to winning back the House and Senate next year.”

As John Ellis writes, the future of the Republican party is now entirely about Trump — unless he’s “defeated” by Republican primary voters in 2022.

And that means his endorsements are very important:

As Ellis notes, “It’s basically as simple as that.”

A Punchbowl News survey of senior Capitol Hill aides finds 73% believe that Republicans will control the House. This is down five percentage points from our last survey.

In addition, 75% of respondents say that Democrats will keep control of the Senate — up five percentage points since last month.

CNN: The 10 Senate seats most likely to flip.

OKLAHOMA U.S. SENATOR — In addition to challengers in the Republican primary for U.S. Senate next year, Sen. James Lankford (R-OK) said he is contending with opposition from a high-ranking member of his own party, Tulsa World reports.

According to The Oklahoman, Oklahoma Republican Party chairman John Bennett told reporters that Lankford’s decision not to object to the results of the 2020 presidential election after the Jan. 6 insurrection was proof that the senator couldn’t keep promises made to constituents.

Said Lankford: “It’s more unheard of than it is rare. I’d say it’s highly unusual for a state party chair in any state in America to come out and say, ‘I’m not going to at least be neutral.’”

Democratic consultant Joe Trippi announced in a USA Today op-ed that he’s joining the Lincoln Project to make sure Republicans don’t win control of Congress in 2022.