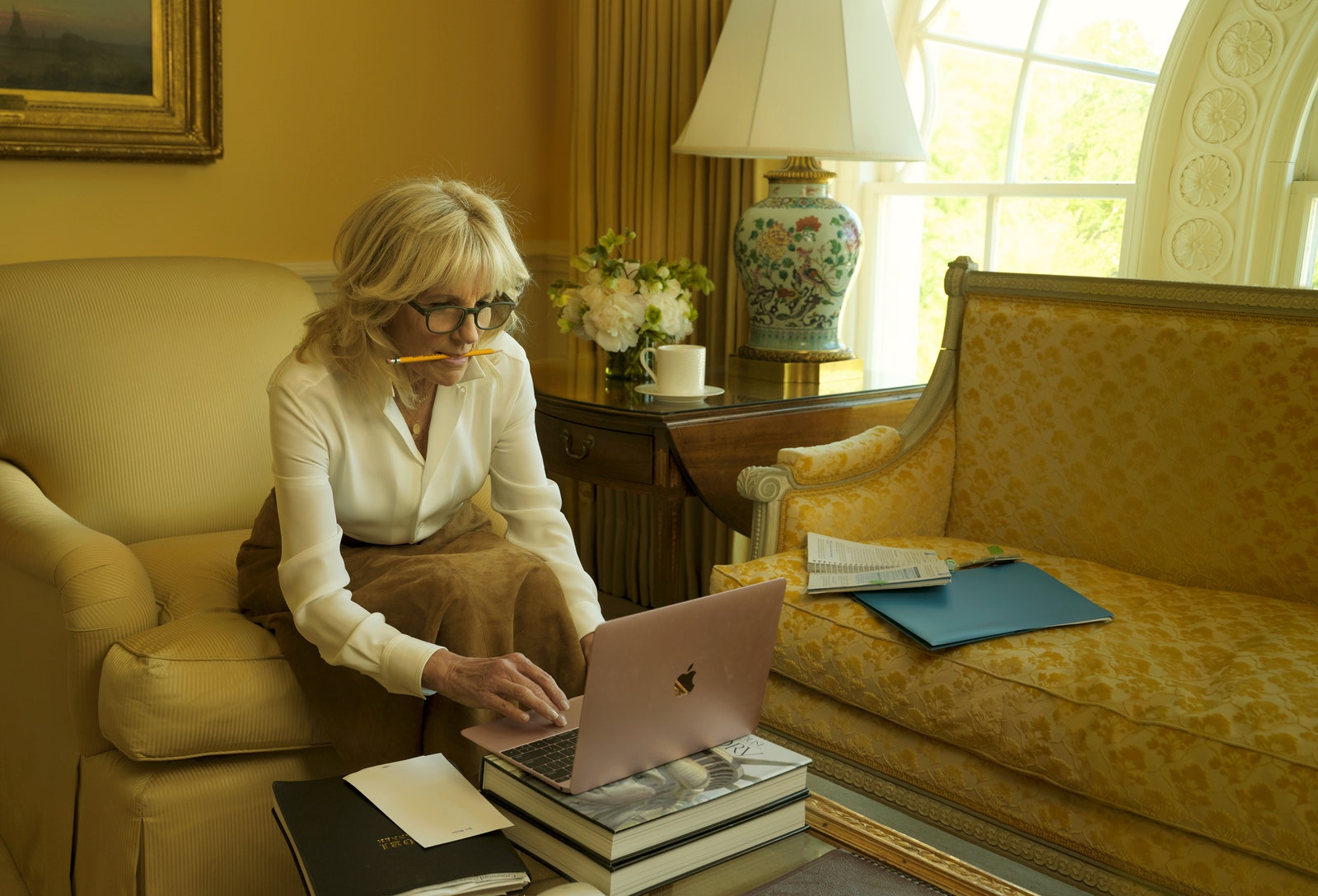 “The U.S. economy added 850,000 jobs in June as the labor market heated up after a spring lull,” the Wall Street Journal reports.

“The last time the economy grew at this rate was in 1984 and Ronald Reagan was telling us it’s Morning in America.” — President Biden, quoted by Washington Post, noting the US is on track for 7% annual growth in GDP.

Brookings legal experts released a new report about Donald Trump’s liability for his company’s legal problems and conclude that Trump himself “is at serious risk of eventual criminal indictment in New York State.”

David Frum: “One of Trump’s skills as a politician is preparing the battlefield in advance. In the case of his first impeachment, he chose to argue outright innocence—‘it was a perfect call’—and no matter how mountainous the evidence of wrongdoing, that was the line he maintained to the end.”

“This time, though, Trump is not claiming that ‘all taxes were paid’ or that ‘it was a perfect tax return.’ He’s readying his supporters for bad revelations about his company’s taxes and directing them to a fallback line that singling him out as a tax scofflaw is politically unfair.”

“That line of defense may well rally Trump’s supporters. It will not do him much good in court.”

Attorney George Conway told CNN that former President Donald Trump’s children should be “very, very worried” about the investigation into the Trump Organization.

“House Minority Leader Kevin McCarthy has asserted he’d ‘have no problem talking to anybody’ about his conversations with then-President Donald Trump on January 6. That proposition may soon be put to the test,” CNN reports.

“McCarthy is just one of several Republicans who could get caught in the crosshairs as the Democratic-led investigation into the Capitol riot unfolds over the coming months, teeing up the possibility of partisan showdowns and raising questions about a conflict-of-interest if any potential witnesses are tapped for one of the five GOP spots on the select committee.”

“Yet, Republicans too have their own emerging plan once McCarthy names his picks: They want to focus on the steps that Speaker Nancy Pelosi took — or didn’t take — to secure the Capitol that day.”

Punchbowl News: “McCarthy initially objected in February to the number of GOP and Democratic seats on the proposed panel, and on how subpoenas would be issued, Pelosi agreed to his suggestions, only to have McCarthy change his position and raise a completely different objection over the scope of the investigation.”

“When Rep. Bennie Thompson (D-MS), chair of the Homeland Security Committee, cut a deal in mid-May with GOP Rep. John Katko (R-NY), ranking member on Homeland, over legislation to create a bipartisan commission, McCarthy ended up publicly repudiating the agreement his own member made. Thirty-five House Republicans voted for the bill anyway, only to see it blocked by Senate Republicans.”

“And now with Cheney on the select committee, Pelosi has once more forced McCarthy into a tough situation. Compared to the proposal that Thompson and Katko hashed out — or the compromise floated by Sen. Susan Collins (R-ME) — the select committee approved by the House is bad format for McCarthy and the Republicans. There’s no time limit on the investigation, Republicans have no say in who or how many subpoenas can be issued and Pelosi has a veto over McCarthy’s appointments.”

“A conservative YouTuber who participated in the January 6 riot accompanied Republican members of Congress on a trip to the border Tuesday night, serving as a translator at times,” CNN reports.

“The Supreme Court on Friday turned away a challenge from a Washington State florist who declined to create an arrangement for a same-sex wedding, the latest development in a long running dispute over LGBTQ rights,” USA Today reports.

“The court refused to hear the case without comment, as is its usual practice. Three conservative associate justices, Clarence Thomas, Samuel Alito and Neil Gorsuch, said they would have taken the case. The high court’s decision not to take the case leaves in place a Washington State Supreme Court ruling against the florist.”

“Attorney General Merrick Garland on Thursday announced a moratorium on federal executions, a shift from the Trump administration, which had resumed the use of the death penalty in federal cases,” The Hill reports.

The Washington Post reports Garland cited “serious concerns” that had been raised about the application of the death penalty across the country, particularly on its “disparate impact on people of color and the troubling number of exonerations in capital and other serious cases.”

New records obtained by the Arizona Republic reveal the behind-the scenes efforts by Donald Trump, his personal attorney Rudy Giuliani, and state GOP Chair Kelli Ward to pressure the county supervisors, who make up the elected body that oversees elections in the state’s most populous county.

After Maricopa County Supervisor Clint Hickman asked Arizona GOP Chair Kelli Ward to clarify what she meant when she asked for the “transparency of a human evaluation,” Ward replied: “We need you to stop the counting.”

“President Biden on Friday nominated Amy Gutmann, the president of the University of Pennsylvania, to serve as ambassador to Germany, giving a prominent post abroad to an academic leader who hired Mr. Biden for a lucrative university position after the Obama administration,” the New York Times reports.

Over half of New Hampshire Gov. Chris Sununu’s (R) Advisory Council on Diversity and Inclusion resigned, “condemning the governor’s decision to sign into law a set of regulations limiting certain kinds of teaching on racism, sexism, and other forms of oppression,” the New Hampshire Public Radio reports.

Washington state State Rep. Jim Walsh (R), who is critical of COVID-19 vaccine mandates, wore a yellow Star of David at a speech over the weekend — a symbol the Nazis forced Jews to wear during the Holocaust, the Seattle Times reports.

Walsh issued an apology after he wore a yellow Star of David at a conservative event last weekend to protest vaccine mandates.  Said Walsh: “I apologize for using a profound image in a way that was inappropriate and offensive to so many people. It was wrong. It won’t happen ever again.”

“President Vladimir Putin told Russians to get vaccinated against COVID-19 amid a wave of cases, and said for the first time that he had received Russia’s Sputnik V shot,” Reuters reports.  “The Kremlin had previously said that Putin received a two-dose vaccine in March and April, but it gave no further details and did not release images of him getting it.”

“Mainstream candidates delivered a stinging setback to France’s far right in the second round of regional elections on Sunday, thwarting its hopes of winning control of a region for the first time and slowing its momentum ahead of the presidential contest next year,” France 24 reports.  “Marine Le Pen’s far-right RN was soundly defeated in the key southern battleground of Provence-Alpes-Côte-d’Azur, its main hope of winning control of a region. The far-right leader blamed ‘unnatural alliances’ between foes for keeping her party out of power.”

“China has begun construction of what independent experts say are more than 100 new silos for intercontinental ballistic missiles in a desert near the northwestern city of Yumen, a building spree that could a signal a major expansion of Beijing’s nuclear capabilities,” the Washington Post reports.

“Turkey formally withdrew Thursday from a landmark international treaty protecting women from violence, and signed in its own city of Istanbul, though President Recep Tayyip Erdogan insisted it won’t be a step backward for women,” the Associated Press reports.

I disagree. He was the only person who could have prevented the Cuban Missile Crisis from going nuclear. If any other human being had been President in 1962, we would no longer exist. Also, he started the ball rolling on Civil Rights, and paradoxically, his assassination propelled the Civil Rights Act to passage.

Gov. Tom Wolf (D) vetoed a Republican rewrite of Pennsylvania’s Election Code, “making clear his party’s opposition to stricter voter ID requirements and setting up a potential showdown on the issue at the ballot box,” the Philadelphia Inquirer reports.

The Arizona House approved new election restrictions — including language intended to curb the power of Democratic Secretary of State Katie Hobbs — in budget legislation that will soon head to the governor’s desk, the Washington Post reports.

“After nearly 20 years, the U.S. military left Bagram Airfield, the epicenter of its war to oust the Taliban and hunt down the al-Qaida perpetrators of the 9/11 terrorist attacks on America,” the AP reports.

Foreign Policy: “The Biden administration is mapping out a strategy for Afghanistan after the U.S. military completes its withdrawal that is centered around the boosting of economic support for the government, even as many Afghans are ‘increasingly skeptical’ of the government’s competence.”

Fox News has effectively admitted to misconduct that includes sexual harassment, discrimination, and retaliation against victimized employees, and has agreed to pay a million-dollar fine for “a pattern of violating the NYC Human Rights Law,” the Daily Beast reports.

Fox & Friends host Brian Kilmeade claims he was required to read Adolph Hitler’s Mein Kampf in high school.  No school in the United States of America requires the reading of Hitler’s book, unless Kilmeade attended a Nazi school.

“Former Fox News anchor Ed Henry, who was fired from the network after being accused of rape, is suing Fox News CEO Suzanne Scott, accusing her of defaming him ‘as a sex criminal,’” Mediaite reports.  “Henry’s suit also alleges that Scott accused him of sexual misconduct while covering up an affair between the president of Fox News and a subordinate.”

Said a Fox News spokesperson: “We are fully prepared to vigorously defend against these baseless allegations as Mr. Henry further embarrasses himself in a lawsuit rife with inaccuracies after driving his personal life into the ground with countless extramarital affairs in a desperate attempt for relevance and redemption.”