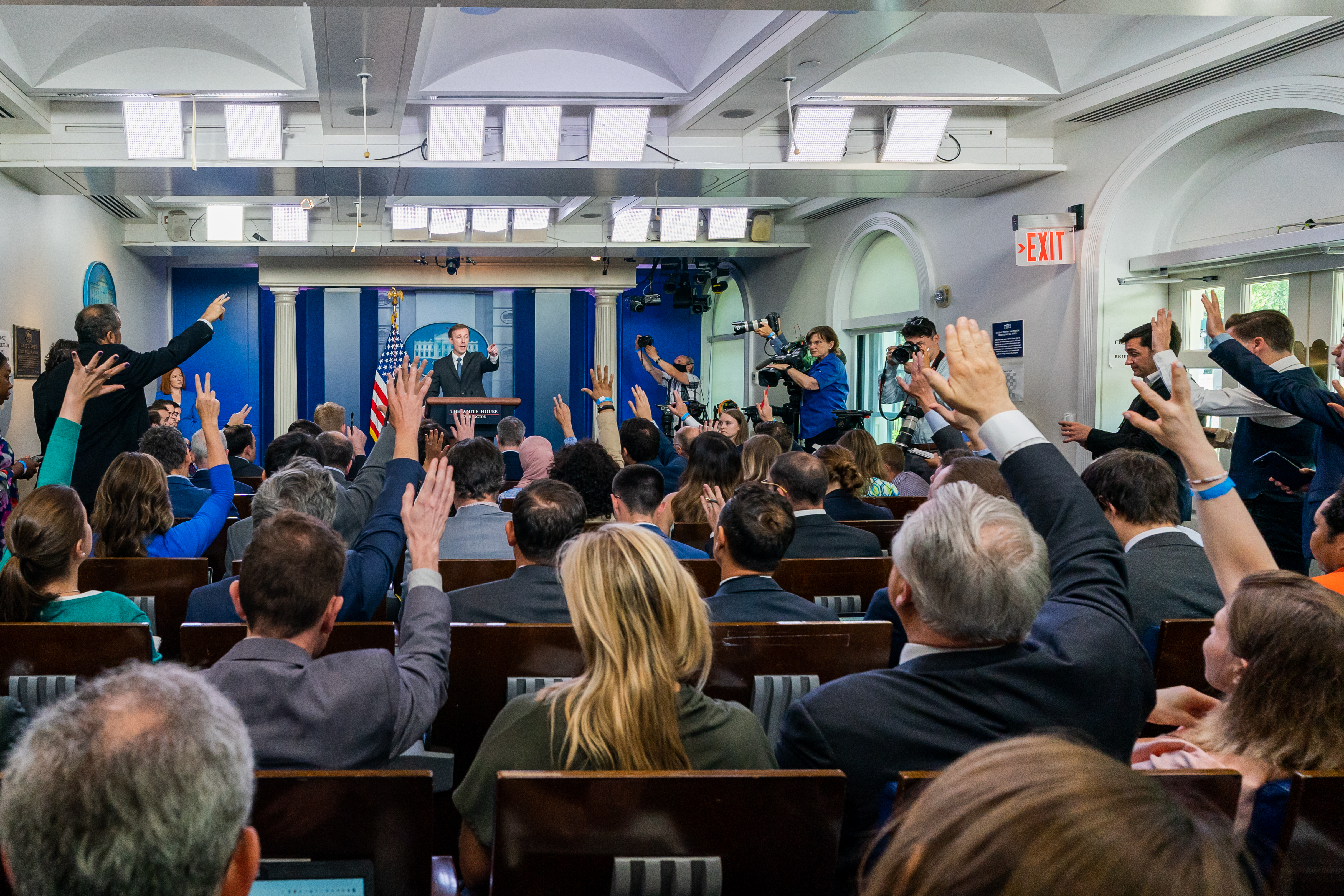 A new Washington Post-ABC News poll finds 59% of Americans believe crime is an “extremely” or “very” serious problem in the U.S., an increase from 51% in Gallup polling last fall and the highest level since 2017.

Americans give President Biden negative ratings for how he has handled the issue of crime, according to the poll, with 38% approving and 48% disapproving, while a sizable 14% offer no opinion.

Biden’s negative numbers do not necessarily translate to a Republican advantage on the crime issue, since 35 percent of Americans say they trust the Democrats to do a better job on crime, 36 percent trust Republicans more and 20 percent volunteer that they trust neither party on the issue.

The poll also finds that a sizable majority believe racial discrimination still exists in the country and say they hope that communities can find solutions to crime beyond putting more police officers on American streets, such as providing economic opportunities to people in low-income communities.

Daily Beast: “A new social media network led by Trump adviser Jason Miller is backed by a fugitive Chinese billionaire who once invited Steve Bannon to live on his yacht.

“The scores of contenders seeking to replace Newsom will now have about two weeks to officially declare their candidacies before a July 16 filing deadline. That also creates an intense time crunch for Newsom’s efforts to correct a legal error and be listed as a Democrat on the ballot: Newsom’s lawyers are due to argue their case in court July 9, about a week before elections officials will finalize the list of candidates.”

Voters will be presented with two separate questions on their ballots. The first will ask whether Newsom should be recalled, while the second will ask them to pick among the candidates vying to replace him. However, the results of the second question will only matter if a majority vote “yes” on the first question. Polls have generally shown the recall question failing.

Newsom and his allies have also strongly discouraged big-name Democrats from running, a stark departure from the 2003 recall of then-Gov. Gray Davis. In that race, Democrats rallied around Lt. Gov. Cruz Bustamante as their backup choice in case the recall succeeded with the awkward slogan of “no on recall, yes on Bustamante.” That position became even more precarious when Bustamante started to criticize Davis in the evident hope that the recall would succeed and he’d reap the rewards. (He didn’t.)

So far, Newsom’s strategy has worked: Not a single notable Democrat has announced a campaign. A number of Republicans with varying degrees of prominence or past political success have, however, said they’ll run, including reality TV star Caitlyn Jenner, former Rep. Doug Ose, 2018 gubernatorial nominee John Cox, and former San Diego Mayor Kevin Faulconer. None, though, possess anything like the star power or nonpolitical branding that allowed Arnold Schwarzenegger to prevail 18 years ago. Schwarzenegger’s celebrity was crucial to helping him tower over the 135-candidate ballot; should such a massive field emerge again this year, it would vex any of the Republicans running.

Local politicos began talking about a repeat bid for Kean almost immediately after his loss, a possibility that grew more likely in February when he announced that he would not seek re-election this fall to the Senate, where he’s served for almost two decades. The New Jersey Globe says that Kean will make an announcement on July 14.

He will apparently make an announcement on Monday, if a countdown clock on his campaign website is anything to go by. LePage would almost certainly clear the GOP field.

OHIO U.S. SENATOR — JD Vance (R), who is running for U.S. Senate in Ohio, deleted a tweet about voting for Evan McMullin for President in 2016.  He also deleted a tweet saying he found Donald Trump “reprehensible” from October 2016.

NEW YORK CITY MAYOR — New York Times: “The outcome of the New York City mayor’s race will likely come down to the results of the more than 125,000 absentee ballots that still remain to be counted.”

“According to preliminary and unofficial results released Wednesday, Eric Adams leads Kathryn Garcia by about 15,000 votes after all rounds of ranked-choice tabulation.”

Key factor: “The areas that cast the most absentee ballots were Manhattan and parts of Brooklyn, where Kathryn Garcia drew stronger support in the Election Day vote tally.”

Eric Adams clinging to a narrow 51-49 edge over Kathryn Garcia in the ninth and final round. That’s a considerable collapse compared to Adams’ standing among first-choice voters, who currently give him a 32-22 lead over Maya Wiley. But crucially, none these tallies include any of the 125,000 absentee ballots that were returned by Tuesday’s deadline, nor an unknown number of provisional ballots. Officials will not start counting absentees until next week, and it could be some time before final results are known.

Those mail-in votes could prove decisive, and they’re likely to favor Garcia: The largest share—32%—were cast in Manhattan, Garcia’s best borough with early and Election Day voters in terms of first-choice votes. (By contrast, about 28% of in-person votes were cast in Manhattan.) They could also completely reshape the last round of the race, because at the end of the eighth round, Garcia leads Wiley by just 347 votes, meaning that Wiley could very well end up as one of the two finalists

Prior to the election, the board had said the first absentee ballots would show up in the tallies starting on July 6, but “more complete” results won’t appear until the following week, and officials have not said when they expect to finish. Following last year’s primaries, it took six weeks for some races to be certified, though there were more than three times as many absentee ballots to count compared to this year. The board has also said it will release new ranked-choice tabulations every Tuesday, though it’s not clear whether this schedule has changed as a result of this week’s fiasco.

2Q FUNDRAISING — The second fundraising quarter of the year, covering the period of Apr. 1 through June 30, has come to an end, and federal candidates will have to file campaign finance reports with the FEC by July 15. But as per usual, campaigns with hauls they’re eager to tout are leaking numbers early, which we’ve gathered below.

Ron Brownstein on the new validated voter surveys: “The cumulative message from these studies is that we should brace for more years of grueling trench warfare between two coalitions that are becoming more and more inimical in both their demographic composition and vision of America. And to top it off? They appear to be about evenly matched.”

“While the Democratic coalition is clearly numerically larger—having won the popular vote in an unprecedented seven of the past eight presidential elections—Republicans have some offsetting advantages, some structural, others manufactured, that could allow them to control Washington nonetheless.”

NEW YORK GOVERNOR — A new Siena poll in New York finds 23% of voters say Gov. Andrew Cuomo (D) should resign immediately, 39% say he should serve out his term but not seek re-election, and 33% say he should continue to serve and run for re-election.

Separately, 35% say they are prepared to re-elect Cuomo if he runs, while 56% would prefer “someone else.”

PITTSBURGH MAYOR — Former police officer Tony Moreno will be the GOP’s nominee for Pittsburgh mayor against Democrat Ed Gainey in November. Moreno ran in the May Democratic primary and finished third. However, he simultaneously received enough write-in votes on the GOP side, where there were no official candidates running, to qualify for the party’s nomination. Incumbent Mayor Bill Peduto, who lost renomination to Gainey, also won write-in votes in the Republican primary but he gave his backing to Gainey on election night.

TEXAS NEW CD — Businesswoman Donna Imam, who was the Democrats’ unsuccessful nominee last year in Texas’ 31st Congressional District, says she’ll run again next year for an unspecified seat in the Austin area. In a video posted to Facebook, Imam said that “we fully anticipate a strong Democratic district” to emerge from redistricting, but her reason for confidence in such an outcome is unclear.

If anything, Democrats should brace for the opposite: Austin and its environs are currently shattered between half a dozen districts in one of the most devilish GOP gerrymanders in the country, and only one of them, Rep. Lloyd Doggett’s 25th, is solidly Democratic. All of the rest are held by Republicans and were won by Donald Trump twice, including the 31st, where Imam lost to Rep. John Carter 53-44 in 2020.

TEXAS 6TH CD — The anti-tax Club for Growth is out with a new ad in support of conservative activist Susan Wright. The spot lists Wright’s conservative credentials and also touts Donald Trump’s endorsement of her, saying, “President Trump needs folks he can count on in Congress, he needs Susan Wright.” Of course, Joe Biden is president, and it’s unclear what a former president would “need” from a member of Congress, other than having his ego stroked.

Republican Rep. Dan Crenshaw, who is one of the more prominent members of Texas’ congressional delegation, has endorsed state Rep. Jake Ellzey in the all-GOP special election runoff on July 27. Crenshaw said he felt motivated to back Ellzey due to the “dishonest” campaign being run by conservative activist Susan Wright, who has the endorsement of Donald Trump.

MONTANA 2ND CD — Democratic state Rep. Laurie Bishop has filed paperwork with the FEC for a possible bid for Montana’s as-yet undrawn 2nd Congressional District, one of many pols from both parties to express interest in running for the state’s new House seat.

GEORGIA 6TH CD — Former Republican Rep. Karen Handel has taken a new job with an economic development organization in Carroll County, which is far to the southwest of her old district, the 6th. That makes it unlikely she’ll wage a second comeback bid, following her 55-45 loss to Democratic Rep. Lucy McBath last year.

PENNSYLVANIA GOVERNOR — Republican state Rep. Jason Ortitay, who’d been considering a bid for governor, said this week that he would not join the race but would instead seek re-election next year.