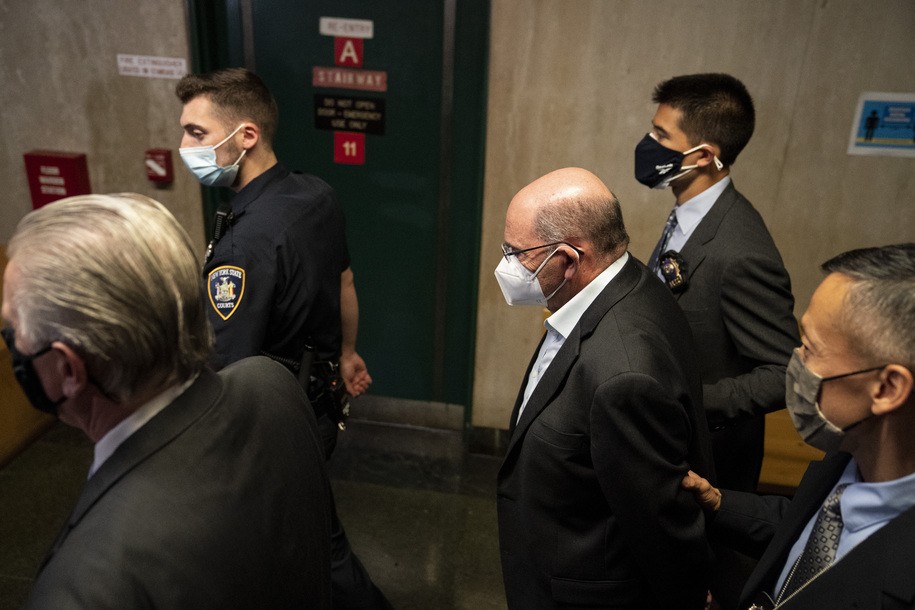 The New York Times described the charges as part of “a 15-year-long tax fraud scheme” and include 15 felony counts, including a scheme to defraud, conspiracy, grand larceny and falsifying business records. Prosecutors say Weisselberg evaded taxes on $1.7 million of income.

Donald Trump’s long-serving chief financial officer, Allen Weisselberg, surrendered on Thursday to the Manhattan district attorney’s office as he and the Trump Organization prepared to face charges in connection with a tax investigation, the New York Times reports.

Trump also released a short statement: ““The political Witch Hunt by the Radical Left Democrats, with New York now taking over the assignment, continues. It is dividing our Country like never before!”

“Former president Donald Trump turned to a familiar playbook Thursday, attacking New York prosecutors who charged his company and chief financial officer with a raft of financial crimes by calling their charges politically motivated and an overreach designed to target him and his supporters,” the Washington Post reports.

“Trump, who has battled through decades of criminal investigations, bankruptcies and scandals, immediately used some of the same phraseology he employed during investigations into his conduct in the 2016 campaign and while he served as president.”

Playbook: “The former president was on a conference call with his advisers Monday discussing his favorite topic — revenge — when he was interrupted with an update on the Manhattan D.A.’s investigation. He would not be personally indicted, Trump was told — only Weisselberg and the Trump Organization would be. Trump was thrilled by what he saw as light charges, and according to one of the advisers on the call, his mind raced to 2024.”

“The adviser had the impression that Trump, who was already coming off a high from the large crowd at his rally in Ohio last weekend, was emboldened by the news.”

Though the charges unveiled today against the Trump Organization were brought by New York prosecutors, the indictment alleges a federal tax fraud scheme propagated over 15 years. CFO Allan Weisselberg is alleged to have evaded $556,385 in federal taxes, in addition to $106,568 in state taxes and $238,159 in local taxes.

Furthermore, the scheme was documented by internal spreadsheets that tracked the amounts which were paid to Weisselberg and then deducted from his compensation so that he could avoid taxes.

This indirect compensation was never reported to the IRS or state taxing authorities.

As tax expert Daniel Shaviro notes: “I’ve read the Weisselberg indictment. If we take its assertions as true, this is no ticky-tack, or foot fault, or debatable case of tax fraud. You might as well repeal the federal, state, and city income taxes as discover this sort of conduct and not prosecute it.”

Former U.S. Attorney Harry Litman adds: “The most important point about the indictment: it’s not an isolated series of tax violations. It’s rather a criminal scheme to defraud, as well as counts of conspiracy and larceny. So while it’s not a “little RICO” indictment, it does present the conduct as an ongoing pattern.”

If the documentation is as solid as it sounds, law professor Ryan Goodman suggests the IRS should also file federal charges against Weisselberg and the company.

The Supreme Court on Thursday upheld voting restrictions in Arizona and signaled that challenges to new state laws making it harder to vote would face a hostile reception from a majority of the justices, the New York Times reports.

The vote was 6 to 3, with the court’s three liberal members in dissent.

The Supreme Court on Thursday struck down a California law that required nonprofits to hand over a list of their biggest donors.

Axios: “In a 6-3 ruling authored by Chief Justice John Roberts, the court said California had subjected donors to the threat of public harassment and intimidation, undermining their First Amendment right to free association.”

Pelosi said that she hopes Minority Leader Kevin McCarthy (R-CA) doesn’t slow walk appointing Republicans to the committee. But if he does or refuses to seat members, Pelosi hints she won’t wait to get started.

Liz Cheney: “I’m honored to serve on the January 6th select committee. Our oath to the Constitution must be above partisan politics.”

“If any Republican accepts an appointment from Speaker Nancy Pelosi to the Jan. 6 select committee, they better be ready to get all their committee assignments from her.”

“Republicans, McCarthy said, get their committee assignments from Republicans — not from Democrats. Or else.”

Rep. Adam Kinzinger (R-IL) had a simple reaction to Minority Leader Kevin McCarthy’s (R-CA) threat to strip any Republicans of committee assignments if appointed by Speaker Nancy Pelosi (D-CA) to investigate the Capitol insurrection: “Who gives a shit?”

House GOP Leader Kevin McCarthy (R-CA) reacted to Rep. Liz Cheney (R-WY) being picked by Speaker Nancy Pelosi for the Jan. 6 select committee: “I was shocked that she would accept something from Speaker Pelosi. It would seem to me, since I didn’t hear from her, maybe she’s closer to her than us.”

“The U.S. has won international backing for a global minimum rate of tax as part of a wider overhaul of the rules for taxing international companies, a major step toward securing a final agreement on a key element of the Biden administration’s domestic plans for revenue raising and spending,” the Wall Street Journal reports.

“Officials from 130 countries that met virtually agreed Thursday to the broad outlines of the overhaul, including all of the Group of 20 nations.”

“It would be the most sweeping change in international taxation in a century.”

The House approved a sizable $715 billion transportation bill Thursday, a potential investment in roads, rail, public transit and water over five years that could serve as a marker in the negotiations over a bipartisan infrastructure package, the Associated Press reports.

“A vote on the House floor today will reveal how much chutzpah a group of moderate House Republicans have,” Politico reports. “Lawmakers will vote on a $715 billion surface transportation infrastructure bill (separate from the plan Biden just negotiated with Senate Republicans). Tucked inside are hundreds of millions of dollars in goodies sought by House Republicans in the form of earmarks, which were revived by House leaders this year after a yearslong ban.”

“Yet Republicans are expected to vote overwhelmingly against the package, calling it a financial boondoggle — even as many of them reap the benefits. The attack ads practically write themselves.”

Punchbowl News: “In the old days, this would never happen. If a member got an earmark, they’d vote for the bill. Or their earmark would get dropped somewhere along the way, and they’d never get another one.”

Roll Call: Plenty of GOP earmarks in spending bill its members will oppose.

Prompted by Tucker Carlson’s unfounded accusations that he’s being spied on, House Minority Leader Kevin McCarthy (R-CA) called for an investigation into the National Security Agency, which he claims is being “used as a political instrument.”

That brought a succinct reply from Gen. Michael Hayden, who formerly headed the agency: “You’re an asshole.”

“Republican senators are rallying against one of the main ways President Biden wants to pay for his infrastructure deal — a $40 billion infusion to help the Internal Revenue Service collect $100 billion more in taxes,” Axios reports.

“If this partisan sentiment is as widespread as several Axios interviews suggest, it raises doubts about whether the IRS funding proposal can make it into law.”

“North Korean leader Kim Jong Un berated senior ruling party and government officials for their failures in the fight against the coronavirus, which created a ‘huge crisis’ for the country, state media reported,” Politico reports.

“The alleged ‘grave incident’ in North Korea’s pandemic fight was not specified in the report Wednesday from the North’s official Korean Central News Agency.”

“North Korea has claimed to have had no cases of coronavirus infections throughout the pandemic, despite testing thousands of people and sharing a porous border with its ally and economic lifeline China, where the first Covid-19 cases were confirmed in late 2019.”

Dr. Anthony Fauci told CNN that contrasting vaccination rates in various parts of the countries could lead to “two Americas.”

Said Fauci: “You’re going to have areas where the vaccine rate is high, where there’s more than 70% of the population has received at least one dose. When you compare that with areas where you may have 35% of the people vaccinated, you clearly have a high risk of seeing these spikes in those selected area.”

Washington Examiner: “Former President Donald Trump is rejecting pleas from Florida Gov. Ron DeSantis to postpone a campaign-style rally this weekend some 200 miles from the Miami suburb amid a search survivors in the Surfside collapse… DeSantis’s office has ‘made a direct plea’ to the former president’s team, calling on it to postpone the Saturday event in Sarasota.”

“One Florida Republican bluntly said Trump and his team need to ‘read the room.’ … For now, the Trump camp is holding firm.”

“A federal judge on Wednesday blocked a Florida law that would penalize social media companies for blocking a politician’s posts, a blow to conservatives’ efforts to respond to Facebook and other websites’ suspension of former President Donald Trump,” the Washington Post reports. “The law was due to go into effect Thursday.”

“Flournoy’s tight approach, which includes blocking longtime allies from contacting Harris, has led to both praise and criticism. It also has created tension within the vice president’s team and among her outside confidants and donors.”

Teddy Schleifer: “While bundlers do like to complain, bundling is not easy work, and the unspoken promise of low-stakes political appointments is the grease that makes the big-money machine run. An ambassadorship is like the goodie bag that newlyweds give their guests in exchange for schlepping to the ceremony. Tokens of appreciation matter. Or as one Biden bundler summarized the relationship to me: ‘People need to be thanked more.’”

“Cutting out the perks of fundraising, whether it’s a V.I.P. badge at a nominating convention or an appointment to an exotic country, could make some donors less likely to participate in the process, despite bipartisan, highfalutin’ rhetoric about fundraising being a labor of love. That’s a concern that some Biden bundlers tell me they hold. Over time, according to a Biden official, the White House expects about 30 percent of its ambassadors to be political appointees — that would be more or less in line with the average before Trump, who gave away 44 percent to his friends.”

The New York Times has compiled an amazing video of the riots at the Capitol on January 6.

“What we have come up with is a 40-minute panoramic take on Jan. 6, the most complete visual depiction of the Capitol riot to date. In putting it together, we gained critical insights into the character and motivation of rioters by experiencing the events of the day often through their own words and video recordings. We found evidence of members of extremist groups inciting others to riot and assault police officers. And we learned how Donald Trump’s own words resonated with the mob in real time as they staged the attack.”