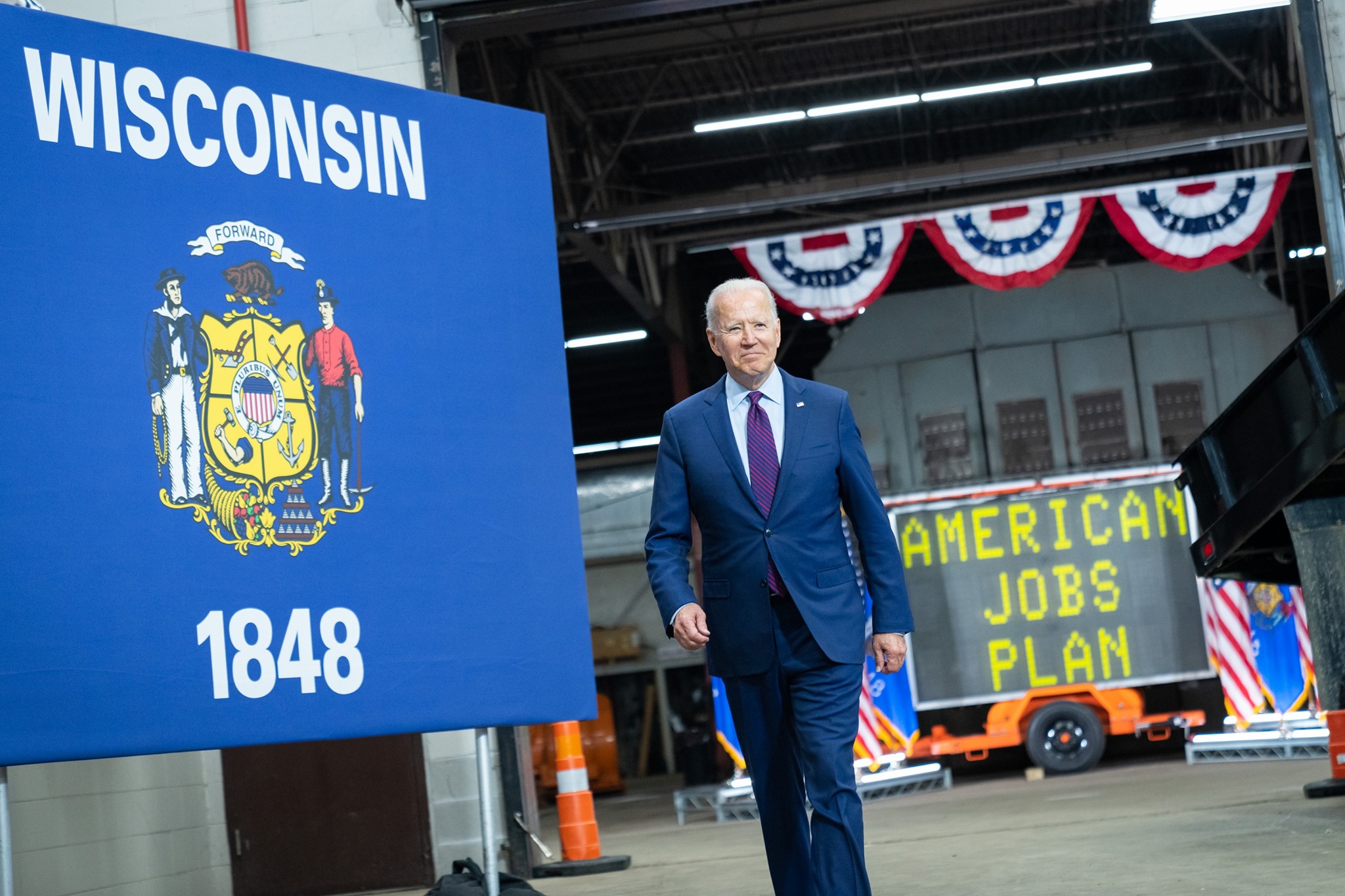 “A new tally of votes in the New York City Democratic mayoral primary suggested that the race between Eric Adams, the primary night leader, and his two closest rivals had tightened significantly, plunging the closely watched contest into a period of fresh uncertainty,” the New York Times reports.

“According to Tuesday’s unofficial results, Mr. Adams prevailed over Kathryn Garcia by two percentage points, 51.1% to 48.9% — a margin of 15,908 votes — after 11 rounds of elimination, with Maya Wiley in third place.”

“But those numbers could be scrambled again as the city’s Board of Elections tabulates outcomes that will include more than 124,000 Democratic absentee ballots, with a fuller result not expected until mid-July.”

David Leonhardt: “Black, Hispanic and Asian American voters are to the right of white Democrats on many issues. Many voters of color are skeptical of immigration and free trade. They favor border security, as well as some abortion restrictions. They are worried about crime and oppose cuts to police funding. They are religious.”

“One way to make sense of these patterns is to focus on social class. Many professionals, with college degrees and above-average incomes, have political views that skew either strongly right or strongly left, largely lining up with one of the two parties’ agendas. Many working-class voters have mixed views.”

“If there were any doubt about that, the 2020 election — when voters of color shifted right — should have cleared it up. And last week’s New York mayoral election has become the latest piece of evidence.”

GEORGIA U.S. SENATOR — “Former President Donald Trump said Georgia Bulldog football great Herschel Walker told him he was going to run for U.S. Senate, a decision that would make him the front-runner in the chaotic race against Democratic incumbent Raphael Warnock,” the Atlanta Journal-Constitution reports.

BUFFALO MAYOR — “Byron Brown on Monday launched an unprecedented write-in campaign to reclaim the mayor’s office he apparently lost in the June 22 Democratic primary as an increasingly chaotic situation surrounds the victory of newcomer India Walton,” the Buffalo News reports.

Among those eager to back Brown are the local police union and wealthy Republican businessman Carl Paladino, who said, “I’ll do everything I can to destroy her.” Paladino would at least know a thing or two about getting destroyed: As the GOP’s nominee for the open-seat governor’s race in 2010, he lost to Democrat Andrew Cuomo by a giant 62-33 margin, despite that year’s red wave.

Brown issued a statement saying he’d refuse support from Paladino, a notorious racist and hardcore Trump supporter, but you’d be hard-pressed to see a lot of daylight between the two: In comments on Monday, Brown said supporters have told him that “they don’t want a radical socialist occupying the mayor’s office in Buffalo City Hall.”

NEW YORK GOVERNOR — Andrew Giuliani received no support for his bid to be the next governor of New York in a secret vote by local Republican leaders this week, the Rochester Democrat & Chronicle reports.

Instead, the party picked Rep. Lee Zeldin (R-NY) as their preferred choice.

ARIZONA AUDIT — “Maricopa County will not reuse most of its voting equipment after it has been with Arizona Senate contractors for its audit of November election results,” the Arizona Republic reports.

“The potential cost to taxpayers is so far unknown. The county is about half way through a $6.1 million lease with Dominion Voting Systems for the equipment, but it’s unclear whether it will have to pay the rest of the money owed under that lease, and whether the county or Senate will be on the hook.”

A new Bendixen & Amandi International poll in Arizona finds voters are opposed to the “audit” of the 2020 election, 49% to 46%.

“But the survey of 600 likely voters found that the intensity of opposition to the audit exceeded the intensity of support, with those strongly opposed to it outnumbering those strongly in favor by 5 percentage points. And while Democrats and Republicans broke along familiar partisan lines, independent voters upon whom the state pivots in close elections opposed the audit by 18 percentage points.”

“Plans for former President Donald Trump to return July 4th weekend to the city many credited with lending legitimacy to his 2016 campaign after USS Alabama Battleship Memorial Park commissioners reportedly did not sign off on a plan for Trump to hold a rally at the Mobile site,” AL.com reports.

“The commissioners were concerned that Trump’s appearance on Saturday ‘was going to be a partisan political event, rather than just a patriotic event planned for that evening.’”

ARIZONA GOVERNOR — Businessman Steve Gaynor announced on Friday that he was joining Arizona’s Republican primary for governor, potentially setting up a rematch from 2018. That year, Gaynor challenged scandal-plagued incumbent Michele Reagan for the GOP nomination for secretary of state, crushing her by a two-to-one margin, in part by pledging to place ever more restrictions on voting. In the general election, however, Gaynor lost just 50.4-49.6 to Democrat Katie Hobbs, who herself kicked off a gubernatorial bid earlier this month.

TEXAS 15TH CD –– It looks like the pleading worked, if it was even necessary in the first place: Democratic Rep. Vicente Gonzalez, who escaped with a shockingly close 51-48 win last year, says of a possible retirement, “I will one day, but it won’t be anytime soon.” The dramatic collapse of Democratic performance in southern Texas in 2020, combined with the possibility that Republicans might target his seat in redistricting, had some Democrats worried that Gonzalez might head for the exits, according to a report last month in the Washington Post—and urging him to stay.

Fears of a Gonzalez departure ramped up after Rep. Filemon Vela, who represents a neighboring district that also went south for Democrats last year, announced his own retirement in March. And in the first quarter of the year, Gonzalez repaid himself $250,000 for loans he’d extended to his campaign back in 2016, a possible sign he was preparing to wind down his political career. But he insists he’s running full-bore, telling Politico, “We’ve hired people. We’ve got more of a robust fundraising operation going on. We’ve been up and down throughout the region.”

Gonzalez already faces a rematch from Republican Monica De La Cruz-Hernandez, a little-known insurance agent whose near-upset came despite the fact that she was outspent two-to-one; two years earlier, Gonzalez easily won re-election 60-39. That shift in fortunes was mirrored at the top of the ticket: Joe Biden carried the heavily Latino 15th District just 50-49, a steep drop from Hillary Clinton’s 57-40 win four years earlier, so a key question will be whether this traditionally Democratic area returns to form or whether 2020 was the first stop on a new trajectory.

CONNECTICUT GOVERNOR — Former state House Minority Leader Themis Klarides, who publicly began exploring a bid for governor last month, has now set up what looks like a campaign website (“themis2022.com”), but she still hasn’t committed to seeking the GOP nomination, nor has she offered a timetable for making a decision. So far, Republicans have yet to recruit a prominent challenger to run against Democratic Gov. Ned Lamont next year, though 2018 nominee Bob Stefanowski hasn’t ruled out running.

OHIO 11TH CD — Politico reports that former state Sen. Nina Turner has spent more than $1 million on TV, radio, and online ads ahead of the Aug. 3 Democratic primary for the special election in Ohio’s 11th Congressional District, putting her far ahead of the pack. Her chief rival, Cuyahoga County Councilwoman Shontel Brown, has spent $355,000. Early voting starts next week, on July 7.

OHIO 15TH CD — Coal company lobbyist Mike Carey has released a survey from Fabrizio, Lee & Associates showing him with a 20-9 lead on state Rep. Jeff LaRe in the Republican primary for the special election in Ohio’s 15th Congressional District, but that gap skyrockets to 52-7 when respondents are told that Donald Trump has endorsed Carey. That’s a similar phenomenon—albeit an unsurprising one—to what another GOP pollster found vis-a-vis Trump favorite Ted Budd in the North Carolina Senate race (there, the endorsement news turned a 26-point deficit into a 19-point advantage).

The question for Carey, though, is whether he’ll have the resources to actually inform voters that he’s received Trump’s blessing. According to Politico, most of the $479,000 spent on paid media in the race so far has been on behalf of LaRe, who, rather unusually, has benefitted from former Rep. Steve Stivers emptying his old campaign account to run pro-LaRe ads. The first and only pre-election FEC reports, however, are not due until July 22, so we won’t have a complete financial picture of the race until then.

WISCONSIN 3RD CD — Retired Navy SEAL Derrick Van Orden, who’s seeking a rematch against Democratic Rep. Ron Kind, spent $4,000 in campaign funds on a trip to D.C. for the Jan. 6 “Stop the Steal” rally that turned into an assault on the Capitol, according to the Daily Beast’s Roger Sollenberger. Van Orden has also claimed he “did not step foot on the Capitol grounds,” but Sollenberger says a photo captured that day pictures Van Orden “inside a restricted area,” adding that a recreation of the scene shows that he “would have had to cross police barricades to reach that area.”

As Sollenberger also notes, Van Orden lost his first challenge to Kind in November (by a 51-49 margin), but he didn’t kick off his second bid until April, raising the obvious question of how his D.C. trip could qualify as a “campaign expense” if he wasn’t actually running a campaign. Said a spokesperson for the group Citizens for Ethics and Responsibility in Washington, “Attempting to overthrow an election you just lost is not a proper campaign activity.”

Dan Pfeiffer: “The path to the Senate majority in 2022 runs through the same states that decided the presidency in 2021. Democrats are defending seats in Georgia, Arizona, and Nevada. The Republicans are trying to hold onto seats in Wisconsin, Pennsylvania, Florida, and North Carolina. With the exception of Florida, each of these states was decided by less than two points. Some were decided by less than 0.5 percent. While there are plenty of persuadable voters in these states, and Democrats need to hang onto Republicans that supported Biden out of antipathy towards Trump, the party that comes closest to its 2020 turnout will win. Therefore, the Republicans have a two-prong strategy: turnout their base and keep ours home through a combination of disenfranchisement and disillusion.”

“The Republicans and their Right Wing allies are attempting to keep their base jacked up on a steady diet of Trump and cultural wedge issues like Defund the Police, critical race theory, and burger bans.”

“At the state level, Republicans are working overtime to diminish Democratic turnout with a series of laws targeted at Black, Latino, and younger voters. In the Senate, McConnell wants to do everything in his power to prevent Biden from accomplishing things that excite Democratic voters. He wants to sow cynicism and disappointment through gridlock and obstruction.”

If you’re the campaign manager of a Republican looking to capture a crucial swing seat in 2022, this chart from Axios outlining the drop in partisan media traffic is not great news.

The drop in left-leaning and mainstream traffic wouldn’t trouble me too much if I were running a Democratic campaign. You would expect a drop like that after Trump. And the “Biden doesn’t drive clicks” strategy seems like a good one for now.

But for Republicans, you’d want something like the inverse for their media. You would want Democrats to be overstepping public opinion so much that it drives tremendous interest and media coverage.

That’s not what we’re seeing here.

OHIO U.S, SENATOR — “At least two of the three fundraisers who quit Josh Mandel’s U.S. Senate campaign in recent months did so because of a toxic work environment created by Rachel Wilson, the campaign finance director,” the Columbus Dispatch reports.

“Wilson cussed out her subordinates, often demanded 12-hour workdays, berated them in front of others and called them names.”

Key detail: “Mandel and Wilson have been dating one another since August 2020.”