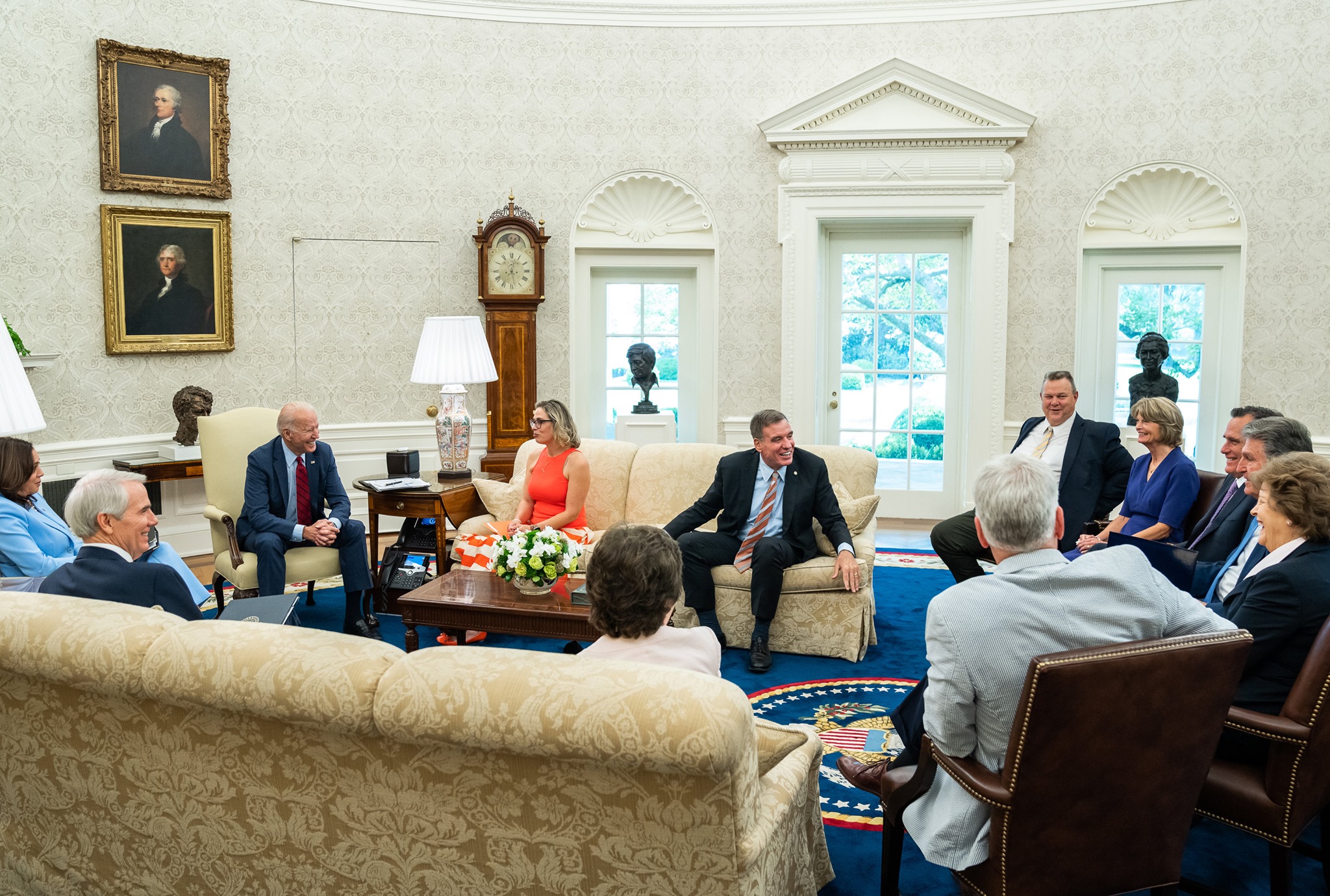 Politico: “With Republicans threatening to abandon the deal, Steve Ricchetti, one of Biden’s lead negotiators, who a day earlier had been credited by the president for his efforts shepherding the deal, scrambled to contain the fallout on Capitol Hill. Both he and Louisa Terrell, the White House top congressional liaison, told the Senators involved in negotiations that Biden was enthusiastic about the deal and would soon hit the road to tout its benefits as well as the merits of bipartisanship. According to two sources familiar with his efforts, Ricchetti told Republicans that the White House was going to clarify the comments.”

“A White House official disputed the notion that Ricchetti suggested Biden may have misspoke — an impression that those two sources said was left. The official said that the president’s team anticipated dustups during the early phases of the process and noted that White House press secretary Jen Psaki several times during Friday’s briefing took a softer tone than Biden did on Thursday.”

Playbook: “The White House is trying to walk back without appearing like they’re walking back.”

“It’s clear that the White House knows they messed this one up. The threat to veto the bipartisan bill hasn’t been repeated by staff or the president since his initial remarks.”

Charlie Cook: “There is a certain Alice’s Adventures in Wonderland aspect to watching some normally tax-averse Republicans pushing for President Biden to index the gas tax to inflation and impose a user fee on electric vehicles as part of the infrastructure package. While lawmakers in both parties surely have reasons to support or oppose those policies on the merits, some on the GOP side sure seem to be trying to entice Biden to break his pledge of not raising taxes for those making less than $400,000 a year.”

“For his part, Biden seems to be digging in his heels, knowing that if he were to go along on this hike, he would never hear the end of charges that he had broken his promise, a la George H.W. Bush. But Biden is fighting both the gas-increase and mileage-fee proposals tooth and nail, not a usual occurrence for Democrats who are rarely morally opposed to tax hikes. The reality in modern times is that there have been two major parties—a tax-and-spend party, which would be Democrats, and a borrow-and-spend party, obviously Republicans.”

Jonathan Chait: “The Republican public argument is that tying the two bills together represents a betrayal. The position that the parties can work together only if the majority party refuses to pass partisan bills is not one Republicans supported when they held majorities. Nor, for that matter, did Democrats ever make such a demand when they were in the minority. During Donald Trump’s first two years, Republicans worked on partisan legislation to cut taxes for the wealthy and repeal Obamacare, while Democrats negotiated (unsuccessful) deals on immigration reform, and then successful bills to provide COVID relief.”

“The Democratic Party view was that bipartisan dealmaking could operate on a separate track from partisan legislation. The parties would fight on issues they disagree on, and cooperate where they agreed. McConnell has always treated Democratic partisan legislation as a kind of offense that compels total warfare in retaliation.”

“McConnell’s calculation may be cold, but it is probably not wrong. He has been admirably clear about his strategy in the past.”

Ex-police officer Derek Chauvin was sentenced to 22.5 years in prison for the murder of George Floyd, a Black man who died after being pinned face down on the street with Chauvin’s knee pressed into his neck for more than nine minutes.

Vice President Kamala Harris “accomplished what she came here to achieve: release months of pressure on her to visit the southern border while avoiding igniting any new controversies,” CNN reports.

“At each of her three stops in El Paso, Harris and her team seemed intent on dutifully going through the motions of an official visit to the border while seeking to create as little noise as possible.”

Washington Post: “Harris faced sharp criticism from Republicans who claim White House immigration policies are too lax as well as critiques from liberal advocates who argue President Biden is continuing the harsh policies of his predecessor.”

“Donald Trump on Saturday will kick off his revenge tour against Republicans who defied him in the aftermath of the 2020 election and January 6 insurrection, hoping to convince his supporters to fire Ohio Rep. Anthony Gonzalez,” CNN reports.

“The effort to oust the Republicans who crossed him will be one of the biggest tests of Trump’s post-presidential power, assessing whether the former President still has the sway with base Republican voters that he enjoyed during his four years in the White House.”

Former President Donald Trump addressed the speculation he might try to become Speaker if Republicans win back the House next year in an interview with CBN.  Said Trump: “Well, I’ve heard the talk and it’s getting more and more. But it’s not something that I would’ve considered but it is certainly — there’s a lot of talk about it. I have a good relationship with Kevin McCarthy and hopefully we will do everything traditionally. But the election was a horrible, horrible thing for our country.”

“Giuliani ‘rarely complained’ and, instead, ‘seemed to crave the attention,’ according to Michael Bender in his new book Frankly, We Did Win This Election: The Inside Story of How Trump Lost.”

Said one aide: “Rudy never wanted to be left out. If you were ever between Rudy and the president, look out. You were going to get trampled.”

“Responding to interest from President Donald Trump, White House aides drafted a proclamation last year to invoke the Insurrection Act in case Mr. Trump moved to take the extraordinary step of deploying active-duty troops in Washington to quell the protests that followed the killing of George Floyd,” the New York Times reports,

Trump denied that he had wanted to deploy troops in a statement: “It’s absolutely not true and if it was true, I would have done it.”

“ProPublica has obtained new details about the Trump White House’s knowledge of the gathering storm, after interviewing more than 50 people involved in the events of Jan. 6 and reviewing months of private correspondence,” ProPublica reports.

“Taken together, these accounts suggest that senior Trump aides had been warned the Jan. 6 events could turn chaotic, with tens of thousands of people potentially overwhelming ill-prepared law enforcement officials. Rather than trying to halt the march, Trump and his allies accommodated its leaders, according to text messages and interviews with Republican operatives and officials.”

Senate Finance Committee Chairman Ron Wyden (D-OR) “is considering reviving a proposal that would limit how much wealthy individuals can shield retirement savings from taxes, after a ProPublica report that Peter Thiel had amassed $5 billion in a tax-free account,” Bloomberg reports.

“Wyden, the Democrat who controls the Senate’s tax agenda, said he would revisit his 2016 proposal that would prevent people from contributing to Roth individual retirement accounts once they’ve reached $5 million in value.”

“The Senate Judiciary Committee approved a pair of bills Thursday that would dramatically expand video coverage of federal court trials and other proceedings while putting Supreme Court arguments on camera for the first time,” Politico  reports.

“The House voted Friday to restore a rule curbing leaks of methane from oil and gas operations, a step forward in the fight against climate change that comes amid growing tensions among Democrats over whether more dramatic action is being sacrificed in the push for a bipartisan infrastructure deal,” the Washington Post reports.

“The vote to require oil and gas operations to limit methane, a potent greenhouse gas whose emissions have surged in recent years, represents an attempt to roll back the Trump administration’s deregulatory environmental push.”

House Republicans plan to hold their own public hearing on the origins of Covid-19 next week that, according to Minority Whip Steve Scalise (R-LA), will feature “many respected doctors, scientists” and “members of Congress who’ve been investigating this on their own,” NBC News reports.

Insider: “Congressional Republicans are itching to investigate Hunter Biden’s international business dealings again, in hopes of uncovering evidence of wrongdoing that they can link back to his father, President Joe Biden, ahead of the next presidential election… GOP lawmakers told Insider that they had lots of unanswered questions and were ready to flex their oversight power if voters put them in a position to lead investigations again.”

“The playbook is well worn for Republicans… Democrats say that Republicans are chasing conspiracy theories and that reporters and fact-checkers have already found no wrongdoing by the president. No evidence has suggested that Hunter Biden’s work influenced policy decisions while his father was the vice president.”

“The Federal Trade Commission will be the agency to review Amazon’s proposed acquisition of Hollywood studio MGM, just as the commission gets a new chairwoman who has been critical of the online giant’s expansion,” the Wall Street Journal reports.

Politico: “Ilhan Omar started out in Congress as a somewhat lonely critic of decades of U.S. policy in the Middle East. Now, six months into her second term, the Minnesota Democrat has new and diverse allies. … Democrats are showing they’re increasingly comfortable backing her up, particularly as she hammers the Israeli government in ways that buck long-held bipartisan traditions in Washington.”

“That friendlier posture toward Omar indicates that her party’s shift on America’s role in the Middle East was more than just a short-term fixture of the recent 11-day conflict between Israel and Palestinian militants in Gaza… A generational divide within the Democratic Party has elevated younger lawmakers’ calls for a recalibration in U.S. policy toward Israel.”

“In response to a new state law allowing local governments to set their own gun regulations, city leaders in Boulder, Colorado want to reinstate a ban on the sale and possession of weapons such as the AR-15-style pistol used in a mass shooting at a supermarket in March,” the Wall Street Journal reports.   “Gov. Jared Polis (D) signed legislation Saturday making Colorado the first state to repeal what is known as a pre-emption law. Previously the state was one of 45 that banned cities from enacting firearms regulations.”

More at Green That Life: The preemption law is an effective tool in stifling citizen engagement.

Former NRA President David Keene was duped by Parkland parents into giving a fake graduation speech to 3,044 empty chairs, representing the number of students who should have graduated this year but didn’t because they were killed by guns.  Keene thought this was the rehearsal, but a quick Google search would have told him the high school doesn’t even exist.

“Facing a surge in shootings and homicides and persistent Republican attacks on liberal criminal-justice policies, Democrats from the White House to Brooklyn Borough Hall are rallying with sudden confidence around a politically potent cause: funding the police,” the New York Times reports.

“Senior Democrats said they expected party leaders to lean hard into that issue in the coming months, trumpeting federal funding for police departments in the American Rescue Plan and attacking Republicans for having voted against it. … At the highest levels of the president’s party, there is a developing consensus that Democrats need to treat crime as an urgent political issue, and that they cannot allow voters to see the 2022 election as a choice between a liberal party that supports police reform and a conservative party that supports the police in the name of a broader law-and-order message.”