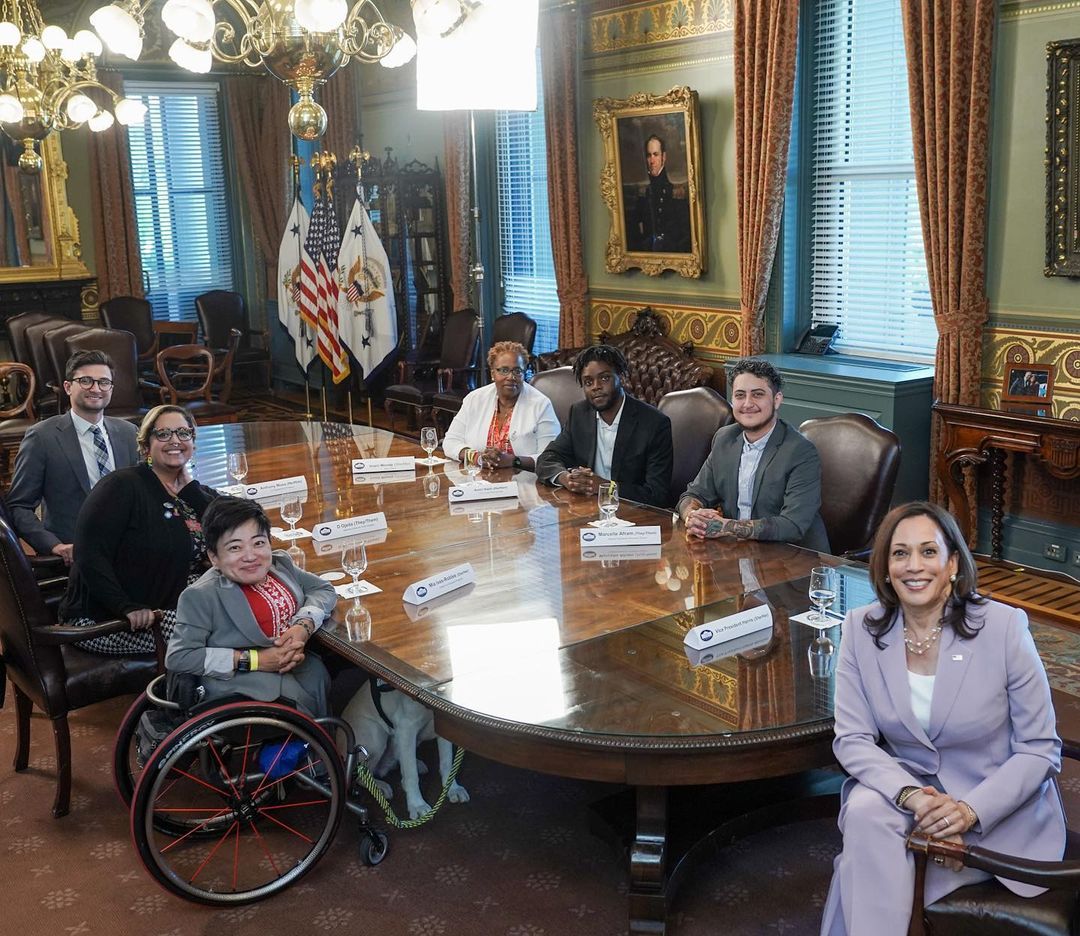 The backdrop: “Texas lawmakers are poised for a special legislative session to again take up new voting restrictions after Democrats staged a dramatic walkout to scuttle the changes during this spring’s regular session.”

A new Quinnipiac Poll in Texas finds 74% of registered voters oppose the new law that allows permitless carry of handguns in the state — including 58% of Republicans.

VIRGINIA GOVERNOR — Glenn Youngkin (R) “has bankrolled a $2 million radio and television blitz since securing his party’s nomination for Virginia governor in early May, an unusually early and aggressive start to advertising by a wealthy, self-funded candidate,” the Washington Post reports.

Youngkin campaigned for the GOP nod by touting himself as an ardent Trumpist, but unsurprisingly, he’s adopted far different messaging since then. Youngkin’s newest spot has him asking, “In our communities, in our houses of worship, right here at work, does anyone really care what political party we belong to?”

Cook Political Report: “Virginia’s post-presidential election gubernatorial contest is poised, once again, to be the most competitive of this off-year’s races and once again test its unique status as a traditional bellwether for a new president. With the matchup set between former Democratic Gov. Terry McAuliffe and Republican nominee Glenn Youngkin, both parties will face critical messaging tests in the wake of the 2020 election.”

“But with early polling showing a close race that’s sure to be the most expensive statewide contest ever in the Old Dominion, it’s clear this race no longer simply has the potential to become engaged but is now already there. As such, we are moving our rating from Likely to Lean Democrat.”

MARYLAND GOVERNOR — Former DNC chair Tom Perez, who’d long been preparing a bid, formally kicked off his campaign for Maryland’s open governorship on Wednesday. Perez, who was born in Buffalo, New York, moved to Maryland after graduating law school in the late 1980s and worked as a federal prosecutor in Washington, D.C.; he later became an adviser to Massachusetts Sen. Ted Kennedy on civil rights, and then served in the Department of Health and Human Services at the end of the Clinton administration.

In 2002, he won a seat on the county council in Montgomery County, Maryland, which is located just outside of D.C., making him the first Latino to ever do so. Four years later, he ran for the office of state attorney general after Democratic incumbent J. Joseph Curran announced his retirement. However, Perez was ruled ineligible to run just weeks before the primary after a lawsuit brought by a Republican candidate for state comptroller challenged his qualifications on the grounds that he had not practiced law in Maryland for the requisite 10 years.

Perez argued that his years as a prosecutor—which included prosecuting cases in Maryland—should count, but the state’s highest court held that only membership in the Maryland bar sufficed. That decision would ultimately have reverberations impacting next year’s gubernatorial race: The beneficiary of Perez’s misfortune turned out to be Montgomery County State’s Attorney Doug Gansler, who went on to serve two terms as attorney general. Gansler lost the 2014 primary for governor in disastrous fashion but is now back for another run.

Not long after his abortive bid for state office, though, the state’s new governor, Martin O’Malley, tapped Perez to serve as Maryland’s secretary of labor—a post he’d later hold on a much bigger stage when Barack Obama nominated him to run the federal Department of Labor in 2013. After the 2016 elections, Perez ran for the position of DNC chair with the support of Joe Biden and other Obama officials, defeating Minnesota Rep. Keith Ellison for a four-year term. He left the job after concluding his term early this year.

Perez joins a heavyweight Democratic field that features among others, state Comptroller Peter Franchot and former U.S. Secretary of Education John King. It also appears to include—after much confusion—former Prince George’s County Executive Rushern Baker. In mid-April, Baker said he was running, but then very shortly followed that up to say he was still considering. Earlier this month, though, he retweeted a notice about an event that described him as a “candidate for governor,” and his campaign website, which had been non-operational, is now online.

TEXAS GOVERNOR — In a new piece on Democratic recruiting in Texas, the Texas Tribune mentions Harris County Judge Lina Hidalgo as a possible candidate for governor. Hidalgo herself hasn’t commented in a while, but in April, she declined to rule out the idea, saying “I wouldn’t say it’s something that I’m actively pursuing right now.” She also noted that her current plan was to run for re-election next year.

Hidalgo, who just became eligible to be governor when she turned 30 in February, narrowly defeated longtime Republican incumbent Ed Emmett 50-48 in 2018 and gained prominence with progressives last year for her efforts to ease voting access during the coronavirus pandemic.

Politico: “On Saturday, Trump will hold a Make America Great Again rally outside of Cleveland, Ohio in support of longtime aide turned Republican congressional candidate Max Miller, who is vying for the seat currently held by Rep. Anthony Gonzalez, a Cleveland native who voted for the second impeachment of Trump… He’s increasingly eager to push the falsehoods that his reelection was deprived of him through nefarious attempts to doctor the vote.”

“There has been discussion among Trump aides ahead of Saturday’s rally about not allowing candidates backstage to take photos with the former president for fear that those images could later be used to falsely imply they received his endorsement. Trump aides have been increasingly aggressive about pushing back on efforts from candidates to suggest they have Trump’s backing when they don’t.”

“Former Vice President Mike Pence on Thursday night made his most forceful attempt yet to separate himself from his former boss, Donald Trump, on the issue of certifying the 2020 election results. Speaking at the Ronald Reagan Presidential Library in Simi Valley, Calif., Mr. Pence defended the constitutionally mandated role he played in certifying the Electoral College vote on Jan. 6,” the New York Times reports.

Said Pence: “I will always be proud that we did our part on that tragic day to reconvene the Congress and fulfilled our duty under the Constitution and the laws of the United States. The truth is, there is almost no idea more un-American than the notion that any one person could choose the American president.”

“It was the furthest that Mr. Pence, a potential Republican presidential candidate in 2024, has gone yet in defending his role that day or distancing himself from Mr. Trump, to whom he ingratiated himself during their four years together in office.”

MICHIGAN GOVERNOR — Fox asked former Detroit Police Chief James Craig this week when he expected to make up his mind whether he’d seek the Republican nod, to which he responded, “I’m optimistic, hopefully within a few weeks I should be making a statement on the decision.”

James also declined to say when she’d be finished investigating the many allegations that have been leveled against Democratic Gov. Andrew Cuomo, saying her probe “will conclude when it concludes.”

Miller-Meeks won an open seat race last year by all of 6 votes as Donald Trump was carrying this southeastern Iowa seat 51-47, but Team Red’s complete control of state government gives legislators the chance to draw up a friendlier district for her next year. Under state law, a nonpartisan agency proposes maps to the state legislature, but while lawmakers have always adopted them, the GOP now can simply reject the agency’s proposals and implement their own gerrymanders.

NEW YORK 22ND CD — Former Democratic Rep. Anthony Brindisi said Thursday that he would not wage a third campaign against Republican Claudia Tenney next year. Brindisi unseated Tenney during the 2018 blue wave but ultimately lost their rematch last year by 109 votes after months of uncertainty.

This seat, which contains Binghamton, Utica, and Rome, backed Donald Trump 55-43, but Tenney’s underwhelming performance could leave her vulnerable even if state Democrats don’t take full advantage of their ability to bypass the state’s new bipartisan redistricting commission to draw up their own maps.

Mayes worked as Democratic Gov. Janet Napolitano’s communication director in 2003 even though she was a registered Republican, and she was later appointed to the Arizona Corporation Commission, the powerful body that regulates utilities. Mayes went on to win statewide races for that office as a Republican, and she left the post at the end of 2010 due to term limits. Mayes says she re-registered as a Democrat in 2019.

“A group of Republicans unhappy with the course of the GOP is forming the Renew America Movement organization to recruit and support candidates in the most competitive 2022 House and Senate races,” Bloomberg reports.

“The group plans to raise ‘tens of millions’ of dollars to support or oppose candidates, regardless of party, to defeat ‘radical Republicans’ who support former President Donald Trump in four to five Senate races and about two dozen House races in next year’s midterm elections. It will also recruit candidates to run in GOP primaries or as independents under the Renew America Movement banner.”

“Evan McMullin, who unsuccessfully ran for president in 2016 as an independent and is a leader of the effort, said the group wants to push the GOP back to its traditional principles and create a new party if necessary for those conservatives who believe the Republican Party has become too extreme.”