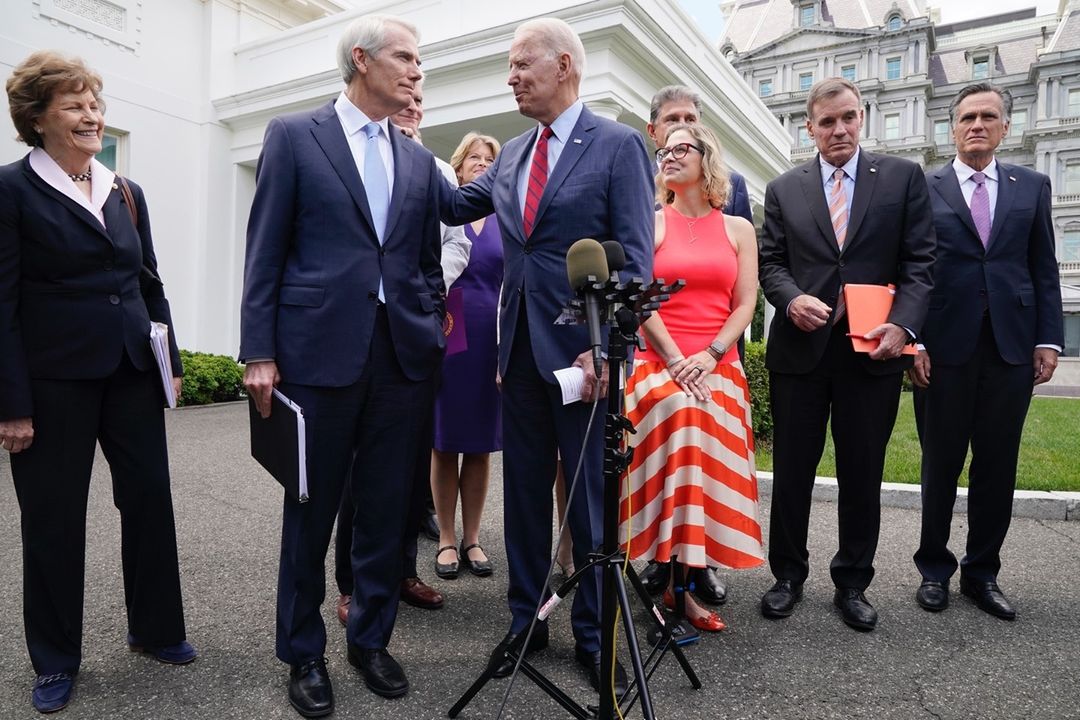 Yeah, this Bipartisan Infrastructure deal is going to fall apart. Why? Because the Republicans that agreed to it thought it meant that Democrats would be precluded from passing anything for the rest of the Biden Administration. Learning that Democrats are also going to pass what they want through Reconciliation has outraged them. This Talking Points Memo headline captures their mood:

HuffPost: “One of the pay-for provisions should set off alarm bells among some Democrats: public-private partnerships, private activity bonds, direct pay bonds and asset recycling for infrastructure investment.”

“These deals, broadly referred to as public-private partnerships, are typically long-term leases or sales of public infrastructure — say a road or a port — to a private company. The government uses the revenue from the lease to build new infrastructure, while the private company gets the right to charge tolls or fees to the public for use of the old infrastructure.”

“The nightmare example of how a public-private partnership can turn sour is in Chicago, where former Mayor Richard Daley sold off the rights to the city’s parking meters and other assets in the late 2000s. The price for a parking space skyrocketed to more than $6 an hour in some parts of the city, and meters were routinely broken or overcharged motorists.”

Moran wants assurances from Sens. Joe Manchin (D-WV) and Kyrsten Sinema (D-AZ) that they will oppose a supplementary reconciliation bill for him to stay onboard.

Some Republicans were apparently openly hoping a bipartisan deal would effectively kill momentum for a reconciliation bill. But that was not Biden’s intention.

“If he’s gonna tie them together, he can forget it! I’m not doing that. That’s extortion! I’m not going to do that. The Dems are being told you can’t get your bipartisan work product passed unless you sign on to what the left wants, and I’m not playing that game.” — Sen. Lindsey Graham (R-SC), quoted by Politico, on President Biden’s refusal to sign a bipartisan infrastructure deal unless a massive budget reconciliation deal also reaches his desk.

Associated Press: “Nearly all COVID-19 deaths in the U.S. now are in people who weren’t vaccinated, a staggering demonstration of how effective the shots have been and an indication that deaths per day — now down to under 300 — could be practically zero if everyone eligible got the vaccine.”

“Breakthrough infections in fully vaccinated people accounted for fewer than 1,200 of more than 853,000 COVID-19 hospitalizations. That’s about 0.1%.”

“Scientists at the National Institutes of Health who studied blood samples from across the United States have discovered that for every coronavirus infection recorded during the spring and summer of 2020, nearly five more went undetected — amounting to nearly 17 million additional cases by July 2020,” the Los Angeles Times reports.

“The discovery… reveals that the coronavirus was far more widespread in the early months of the COVID-19 pandemic than previously thought, and could help scientists and health officials better respond to future outbreaks.”

“In its first major action to combat GOP voter suppression laws, the Biden Justice Department will announce on Friday that it is suing the state of Georgia over its new voting restrictions,” Mother Jones reports.

“The lawsuit is being overseen by Kristen Clarke, the head of the Justice Department’s Civil Rights Division, and Vanita Gupta, the associate attorney general—two longtime civil rights lawyers with extensive records litigating against new restrictions on voting.”

The Washington Post has more details on the lawsuit.

You want to know why white conservatives are freaking the f*ck about race and turning to fascism: Axios: “The latest census is expected to show the first decline in history for the nation’s non-Hispanic white population… White population growth has slowed in recent decades, largely because of falling fertility rates as Americans wait longer to have kids and have fewer of them.”

“How do we save this country before we become Rwanda?” — Tucker Carlson, in a diatribe on Fox News, with a graphic proclaiming “Anti-White Mania.”

Meanwhile, Republicans apparently believe that rallying their base in opposition to “critical race theory” will help put them back in power. That’s led to dozens of bills in state legislatures to “ban” the concept, even though most don’t even bother to define it. Many GOP lawmakers have struggled in interviews to even describe it.

One new bill in Pennsylvania not only prohibits universities from promoting such thoughts, it also bans them from hosting speakers or assigning readings that do. The bill would effectively ban speakers who advocate policies as simple as affirmative action to correct systemic racism in our institutions. Not that long ago, Republicans took great offensive when students organized on their campuses to block controversial or other “politically-incorrect” speakers. Now Republicans are trying to use state power to do the same thing.

LOL. I guess they had to celebrate on the one day the deal looked good.

Playbook: “Sinema was fundraising last week in Manhattan, where we heard she received a tongue-lashing by a major Democratic donor. The warning was specifically about playing ball with Democratic leadership on the infrastructure bill and her broader go-it-alone brand.”

Said a source: “They gave her a lot of pushback, they said she’s in the majority, make it work, don’t undermine it.”

“Sinema clearly didn’t pay heed. Days later, she doubled down on preserving the filibuster in a WaPo op-ed. Wonder if she was wearing her ‘Fuck Off’ ring when she wrote it.”

Joint Chiefs Chairman Gen. Mark Milley “repeatedly pushed back on then-President Donald Trump’s argument that the military should intervene violently in order to quell the civil unrest that erupted around the country last year,” CNN reports.

“Milley often found he was the lone voice of opposition to those demands during heated Oval Office discussions, according to excerpts of a new book.”

Said Trump: “That’s how you’re supposed to handle these people. Crack their skulls!”

He also told his team that he wanted the military to go in and “beat the fuck out” of the protesters.

“A federal judge dismissed most claims filed by activists and civil liberties groups who accused the Trump administration of violating the civil rights of protesters who were forcefully removed by police before then-President Donald Trump walked to a church near the White House for a photo op,” the Associated Press reports.

“The Manhattan district attorney’s office has informed Donald Trump’s lawyers that it is considering criminal charges against his family business, the Trump Organization, in connection with fringe benefits the company awarded a top executive,” the New York Times reports.

“If the case moves ahead, the district attorney, Cyrus Vance Jr., could announce charge against the Trump Organization and its chief financial officer, Allen Weisselberg, as soon as next week.”

“While the prosecutors had been building a case for months against Mr. Weisselberg as part of an effort to pressure him to cooperate with the inquiry, it was not previously known that the company also might face charges.”

“Attorney General Merrick Garland backed away on Tuesday from doing a broad review of Justice Department politicization during the Trump administration, noting that the department’s independent inspector general was already investigating related issues, including aggressive leak hunts and attempts to overturn the election,” the New York Times reports.  “Democrats and some former Justice Department employees have pressed Mr. Garland to uncover any efforts by former President Donald Trump to wield the power of federal law enforcement to advance his personal agenda.”

Wall Street Journal: “A House committee approved far-reaching legislation to curb the market dominance of tech giants, including Alphabet Inc.’s Google and Facebook Inc. … In a package of six bills, the most significant measure to pass by late Wednesday requires that the largest internet platforms make it easier for users to transport their data to other platforms and even communicate with users on other platforms.”

“The bills must still pass the full House, where the timetable for bringing them to the floor for final votes remains unclear.”

CNN: “Debt relief payments to farmers of color from the US Department of Agriculture were blocked nationwide Wednesday by a federal judge in Florida, the second halt on the payments as push back mounts against the assistance that some White farmers say is racially discriminatory.”

Gov. Greg Abbott (R) has set a special session of the Texas Legislature starting July 8, the Texas Tribune reports.  “Abbott has already said that he plans to ask state lawmakers to work on two priority elections and bail bills that died in the final hours of the regular legislative session after House Democrats walked out of the chamber.”

“More recently, Abbott has said the agenda for the Legislature’s overtime round will also include further restricting in schools the teaching of critical race theory, which refers to an academic discipline that explores the role racism plays in institutions and structures of governance.”

“The White House and Pentagon intend to evacuate thousands of Afghan interpreters and their families to a third country as they await U.S. visa processing,” Politico reports.

“The issue of Afghan interpreters and translators has become a major sticking point in the rush to move thousands of American troops and tons of equipment out of the country by September. … The thousands of interpreters who worked side by side with U.S. troops for two decades have remained in limbo, however, leading to scrambling in Washington to find a way to protect them from the Taliban and others once U.S. forces are gone.”

“The Taliban are advancing at lightning speed across Afghanistan as U.S. troops withdraw. They now control a third of the country, are fighting for control of 42 percent more — and may even be slowing their advance on purpose,” NBC News reports.

CNN: Afghan leaders set to meet Biden at White House at pivotal moment for their nation.

In a video filmed in a parking lot — and oddly featuring him only from the shoulders up — Andrew Giuliani railed against the decision by “five leftist judges” to suspend his father’s law license in New York.

Said Giuliani: “I stand by my father, he did everything ultimately by the book.”