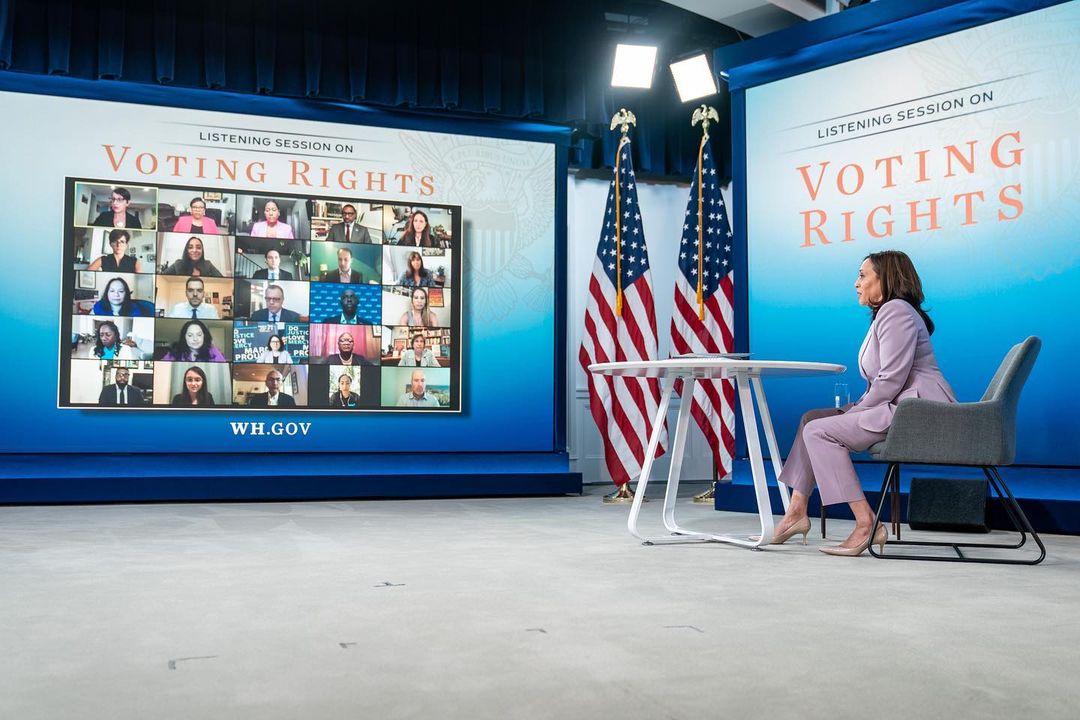 As GOP lawmakers rush to recreate Arizona’s sham audit in their home states, most Americans still have enough of a foot in reality to see the “fraudits” for exactly what they are: purely partisan disinformation campaigns.

A new Monmouth University poll found that 57% of Americans view the fraudits as “partisan efforts to undermine valid election results” based on what they’ve heard about the reviews. Only a third of respondents viewed the so-called audits as legitimate efforts to identify potential voting irregularities. Twice as many Americans also say the reviews will weaken U.S. democracy versus strengthening it, 40%-20%, while about a third of the public believes they will have little impact.

The results provide at least some solace amid polls showing that a substantial majority of Republicans still baselessly believe the 2020 election was stolen from Trump. A Morning Consult/Politico poll released last week also found that a bare majority (51%) of Republicans think the partisan-led reviews will somehow overturn the certified results of the 2020 election. Meanwhile, just 16% of Democrats and 24% of independent voters said they believed the reviews could overturn the 2020 results.

FiveThirtyEight: “In 2004, Pennsylvania Rep. Patrick Toomey was the face of the conservative insurgency. An anti-taxes, anti-spending hawk, Toomey was one of many conservative upstarts who primaried a more moderate fellow Republican.”

“Sen. Mitt Romney called himself ‘severely conservative’ during his 2012 presidential bid and planned to repeal the Affordable Care Act.”

“Toomey, Romney and now-ousted GOP party leader Rep. Liz Cheney have not abandoned the policy views that a decade ago flagged them as conservatives. But in the interim, Trump and his presidency may have shifted the ideological ground beneath their feet.”

NEW YORK CITY MAYOR— Politico: “It was a disappointing finish for someone who spent much of the race in a comfortable lead. When he launched his campaign in January, [Andrew] Yang was the most famous candidate by far. He topped his competitors in name recognition and quickly amassed a campaign warchest that allowed him to spend more than $8 million on the race. And his early support could be measured in individual donors — 21,138, compared to 9,390 for Adams, according to the city Campaign Finance Board’s latest disclosure.”

“It was never enough. Damaging Yang’s chances were both circumstances outside of his control and his own failure to overcome his deficit of knowledge about municipal government.”

WISCONSIN U.S. SENATOR — Milwaukee Journal-Sentinel: “More and more, there are signs that Mandela Barnes is looking to jump into the race” to take on Republican Senator Ron Johnson.

“Barnes recently hired Kory Kozloski as a political adviser to help guide him through the process as he weighs the decision. Kozloski is an experienced political hand with statewide and national credentials.”

NEVADA GOVERNOR — “Former Sen. Dean Heller, a Republican who lost his reelection in 2018, is testing out a potential run for Nevada governor next year, speaking to rural Republicans at two events this month alongside announced candidates,” the AP reports.

MASSACHUSETTS GOVERNOR — State Sen. Sonia Chang-Díaz announced Wednesday that she would seek the Democratic nomination to take on Republican Gov. Charlie Baker, who has yet to say if he’ll run for a third term next year. Chang-Díaz, who is the daughter of NASA’s first Latino astronaut, Franklin Chang Díaz, joins former state Sen. Ben Downing and political scientist Danielle Allen in the primary.

Chang-Díaz, who is of Chinese and Costa Rican descent, became the first Latina elected to the chamber after she won a Boston state Senate seat in 2008, and she is currently the only woman of color in the 40-member chamber. The Boston Globe’s Matt Stout wrote back in March that Chang-Díaz, whom he characterized as a “longtime advocate for school funding reform,” last year “helped negotiate the Legislature’s sweeping policing bill.”

COLORADO U.S. SENATOR — Air Force veteran Eli Bremer, who competed in the 2008 Olympics in the pentathlon and finished 22nd overall, says he’s considering a Senate bid as a Republican next year. Bremer, who is the nephew of diplomat L. Paul Bremer, the viceroy of Iraq following the U.S. invasion in 2003, recently met with NRSC officials in D.C. but said he doesn’t have a timetable for making a decision. However, he’ll be serving as a commentator for the upcoming Tokyo Olympics, which don’t conclude until Aug. 8. So far, Republicans have yet to land a notable candidate to take on Democratic Sen. Michael Bennet.

MISSOURI 4TH CD — On Thursday, Cass County Commissioner Ryan Johnson became the second Republican to enter the race to succeed incumbent Vicky Hartzler, who is giving up this safely red seat in the west-central part of the state to run for the Senate. Johnson joins former state Sen. Ed Emery in what could be a crowded contest.

Johnson, who is a veteran of the Army and Coast Guard, previously worked for another Missouri Republican congressman, Sam Graves, before he helmed the dark money group Missouri Alliance for Freedom. Johnson won elected office for the first time last year when he narrowly unseated an incumbent in the primary.

NEW MEXICO 2ND CD — President Joe Biden announced Friday that he was nominating former Democratic Rep. Xochitl Torres Small for a position at the Department of Agriculture, a move that ends speculation that she could instead try to retake her old seat from Republican incumbent Yvette Herrell. The current version of the 2nd District in southern New Mexico backed Donald Trump 55-43, but Democrats could shift it to the left now that they’re in charge of the redistricting process for the first time in decades.

Guzman, who was the first Latina to serve on the body, joins a nomination fight that also includes Land Commissioner George P. Bush, who has a terrible relationship with the party’s nativist base. She refrained from going after Bush on his attempts to renovate the Alamo, though, and instead argued that she’s the only Paxton challenger who has the experience and credibility to hold this post.

Guzman almost certainly lacks the name recognition of both her foes, though she did enter the race with an endorsement from Texans for Lawsuit Reform, which the Texas Tribune describes as “the powerful tort reform group that supported Paxton for attorney general in the 2014 and 2018 general elections.” A primary runoff would take place if no one earns a majority of the vote in the first round.

MICHIGAN GOVERNOR / SECRETARY OF STATE — Kent County Clerk Lisa Posthumus Lyons, who was the 2018 Republican nominee for lieutenant governor, said Monday that she’d been “approached” by party leaders about potential runs for either governor or secretary of state and didn’t quite rule out seeking a promotion. Lyons instead said that “at this time, it’s not something I’m looking at.”

Businessman Kevin Rinke, who has run auto dealerships in the Detroit area, says he’s considering a bid for the GOP nomination for governor next year. Republicans have yet to land a notable candidate to take on Democratic Gov. Gretchen Whitmer.

MAINE 2ND CD — One more Republican elected official, state Rep. Laurel Libby, says she won’t challenge Democratic Rep. Jared Golden in 2022. A couple of Republicans, including 2020 nominee Dale Crafts, are either considering the race or haven’t ruled out a bid, but so far, no one’s taken the plunge.

OREGON NEW CD –Former Multnomah County Commissioner Loretta Smith has announced a campaign for the new congressional district that Oregon was awarded thanks to reapportionment, though its new borders are unknown and will remain so for some time. Smith, a Democrat, served two terms on the county commission in the previous decade but more recently lost bids for the Portland City Council in 2018 and 2020.

One problem for Smith, though, is that almost all of Multnomah County (most of which consists of the city of Portland) is currently contained in the 3rd Congressional District, represented by veteran Democratic Rep. Earl Blumenauer. With either a bipartisan compromise in the legislature or a court-drawn map likely, it’s exceedingly unlikely we’ll see a radical redraw of Portland, meaning it’s probable Smith’s home base will wind up in Blumenauer’s district.

PENNSYLVANIA 7TH CD –Lisa Scheller, who was the 2020 Republican nominee in Pennsylvania’s 7th Congressional District, confirmed this week that she would mount a second run by advertising her “Scheller for Congress Campaign Kickoff!” event set for June 30. Scheller lost to Democratic Rep. Susan Wild 52-48 last year as Joe Biden was carrying this Lehigh Valley seat by a 52-47 spread.

Scheller has received endorsements from eight of the nine Republicans who represent Pennsylvania in the House (Scott Perry is the lone holdout). So far, Scheller is the only candidate in the GOP primary, though businessman Kevin Dellicker said in March that he was considering the race.