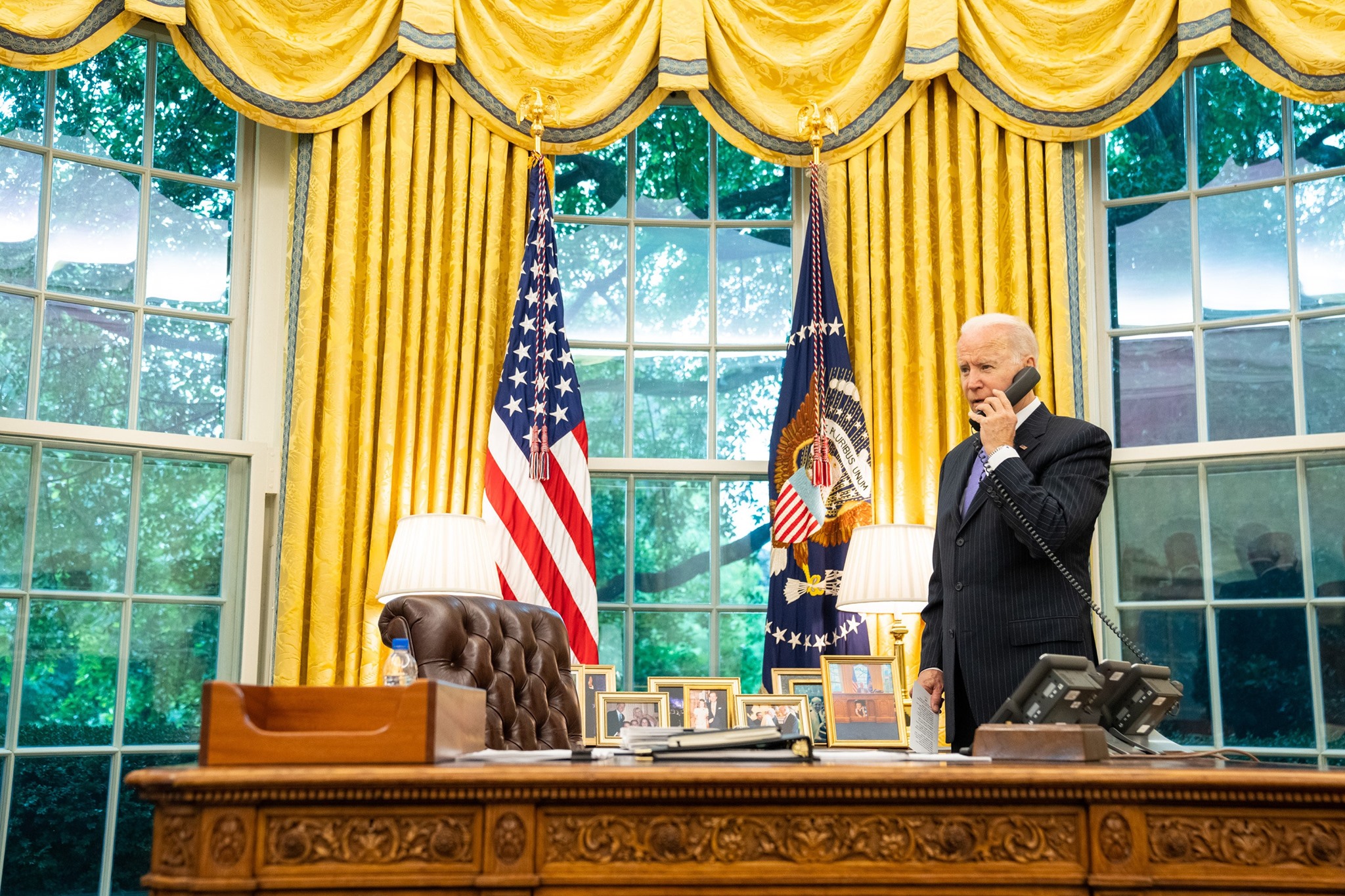 Senate Majority Leader Chuck Schumer (D-NY) he’s reached an agreement with Sen. Joe Manchin (D-WV) where Manchin will vote yes to open debate on the election overhaul bill, CNN reports. That allows Democrats to stay unified on the bill even though it won’t survive a Republican filibuster.

Indeed, Republicans refused to even debate voting rights as all 50 Senate Republicans voted to filibuster. The vote was 50 to 50, but needed 60 “yes” votes to allow debate to proceed.

Politico: “Two states that switched during the pandemic to universal mail voting — mailing ballots to all active registered voters in each election — will now continue that practice permanently, for at least general elections: Nevada and Vermont. Several other states are moving to allow no-excuse mail voting permanently, after allowing it temporarily while Covid-19 raged in 2020.”

“And while many of the state-level expansions of voting programs are happening in blue states, some red states have made changes as well. Kentucky, where Republicans have legislative supermajorities and Trump won the presidential contest by 25 points in 2020, codified in-person early voting for the first time this year.”

“Federal Reserve Chairman Jerome Powell said Monday that job growth should pick up in coming months and temporary inflation pressures should ease as the economy continues to recover from the effects of the pandemic,” the Wall Street Journal reports.

The White House will acknowledge that the U.S. will fall short of President Biden’s goal of having 70% of American adults receive at least one COVID-19 vaccine dose by July 4, CBS News reports.

So far, 65.4% of U.S. adults have had at least one shot and more than 150 million Americans are fully vaccinated.

“Early evidence suggests that the highly contagious delta variant, which has prompted concern worldwide as it leads to new surges of Covid-19 across the globe, is spreading in under-vaccinated pockets of the U.S.,” Bloomberg reports.

“The ongoing spread of the variant in pockets of low vaccine uptake are troubling because they create more opportunities for the virus to thrive and mutate. The longer the virus spreads, the more chances it has to create easier inroads into human cells, and potentially take on deadlier forms.”

“Covid-19 transmission is accelerating in several poorly vaccinated states, primarily in the South plus Missouri and Utah, and more young people are turning up at hospitals. The data present the clearest sign of a rebound in the U.S. in months,” Bloomberg reports.

“In Missouri, Arkansas and Utah, the seven-day average of hospital admissions with confirmed Covid-19 has increased more than 30% in the past two weeks.”

“Every death is tragic. Nearly every death is, at this point, entirely preventable… We know our vaccines work.”— CDC Director Rochelle Walensky, quoted by The Guardian.

Sen. Kyrsten Sinema (D-AZ) reiterated her opposition to ending the legislative filibuster in a Washington Post op-ed, amid growing pressure from Democrats to change the rules to help pass voting rights.

Wrote Sinema: “It’s no secret that I oppose eliminating the Senate’s 60-vote threshold. … My support for retaining the 60-vote threshold is not based on the importance of any particular policy. It is based on what is best for our democracy. The filibuster compels moderation and helps protect the country from wild swings between opposing policy poles.”

Daily Beast: “Trump had asked advisers and lawyers in early 2019 about what the Federal Communications Commission, the courts systems, and—most confusingly to some Trump lieutenants—the Department of Justice could do to probe or mitigate SNL, Jimmy Kimmel, and other late-night comedy mischief-makers.”

“To those who heard it, Trump’s inquiries into what federal regulations could be used to bust the likes of Kimmel and SNL was more of a nuisance than a constitutional crisis… However, the conversations further showed, in the pettiest of ways, how the 45th U.S. president was keen on turning the country’s top law enforcers into something more akin to his own personally retained law firm.”

Wall Street Journal: “John Demers, head of the Justice Department’s national security division, said the sole time in his three-year tenure he considered resigning came when the agency fell under pressure from Trump to pursue baseless claims of election fraud.”

“In early January, Mr. Trump was threatening to fire the acting attorney general over the sought-after election investigation, and, Mr. Demers recalled Monday, he was trying to figure out who would sign foreign intelligence surveillance requests and conduct other agency business if he resigned in protest along with other leading officials.”

New York Times: “The realignment of national politics around urban-versus-rural divisions has seemingly doomed Republicans in [urban-suburban] areas as surely as it has all but eradicated the Democratic Party as a force across the Plains and the Upper Mountain West. At the national level, Republicans have largely accepted that trade-off as advantageous, since the structure of the federal government gives disproportionate power to sparsely populated rural states.”

“But the party’s growing irrelevance in urban and suburban areas also comes at a considerable cost, denying conservatives influence over the policies that govern much of the population and sidelining them in some of the country’s centers of innovation and economic might. The trend has helped turn formerly red states, like Georgia and Arizona, into purple battlegrounds as their largest cities and suburbs have grown larger and more ethnically mixed.”

“Prosecutors’ interest in Mr. Calamari, once Mr. Trump’s bodyguard, indicates that their probe into the Trump Organization’s alleged practice of providing some employees with cars and apartments extends beyond Allen Weisselberg, the company’s chief financial officer, and his family.”

Washington Post: “As the most senior non-Trump executive at the former president’s private, closely held company, Weisselberg is probably a key figure in prosecutors’ efforts to indict Trump, legal experts say. His central role in nearly every aspect of Trump’s business, revealed in depositions and news interviews over the past three decades, afforded him what former employees say is a singular view of the Trump Organization’s tax liabilities and finances.”

“Yet officials involved in the Weisselberg investigation have grown frustrated about what they view as a lack of cooperation from Weisselberg and believe he continues to regularly speak with Trump.”

Punchbowl News: “The White House is dispatching three of its top aides to Capitol Hill today for a flurry of meetings with senators, with the aim of trying to get a better handle on whether a bipartisan Senate infrastructure deal is possible.”

“Assuming that these meetings go well, the administration plans to invite senators from this group to meet with Biden later this week at the White House.”

However: “You should still be skeptical that a deal will come together quickly. These kinds of agreements take forever to turn into legislative text. They still haven’t even settled on the right pay-for mix. We’re really at the beginning of the interesting part.”

Politico: “In the span of a week, Texas Gov. Greg Abbott has signed bills restricting the teaching of critical race theory and allowing Texans to carry handguns without a license. He’s preparing to order state lawmakers back into a special session to pass legislation restricting voting access, a GOP priority. And in the most pugilistic affront to President Joe Biden’s White House yet, he announced Texas will build its own border wall.”

“Less than six months into Biden’s presidency, Texas conservatives are in revolt against the new administration. And Abbott, the often overshadowed governor of the nation’s biggest red state, is emerging as an unlikely leader of the Biden resistance.”

Texas Gov. Greg Abbott (R) vetoed bipartisan legislation that would have banned tethering dogs outside with heavy chains, the Houston Chronicle reports.  The hashtag #AbbottHatesDogs is now trending on Twitter.

“Every few hours this weekend, the Taliban released videos of triumphant insurgents inspecting yet another Afghan district headquarters that had been lost in battle by government forces or surrendered without a fight,” the Wall Street Journal reports.

“Some of these districts, a unit equivalent to American counties, are too remote or sparsely populated to warrant defending as the overstretched Afghan military, shorn of vital U.S. air support, refocuses on protecting the country’s major population centers.”

“Taliban fighters took control of a key district in Afghanistan’s northern Kunduz province Monday and encircled the provincial capital, police said, as the insurgent group added to its recent battlefield victories while peace talks have stalemated,” the Associated Press reports.

“Nicaraguan police arrested journalist and presidential hopeful Miguel Mora on terrorism charges in a broadening crackdown on government opposition ahead of a November election,” Bloomberg reports. “Mora, previously arrested in a 2018, is the fifth opposition candidate to be detained in past month.”

“Marine Le Pen, the former head of France’s far-right National Rally, on Sunday blamed poor turnout for her party’s worse-than-expected performance in the first round of the regional vote,” Deutsche Welle reports.

The powerful sister of North Korean leader Kim Jong Un dismissed prospects for an early resumption of diplomacy with the United States, saying that U.S. expectations of talks would “plunge them into a greater disappointment,” NBC News reports.

CNN: “The subpoena that swept up the records of two Democratic congressmen, their staff and family members in 2018 appears to have been the result of a leak investigation that initially included scrutinizing a senior aide on the House Intelligence Committee, and not the lawmakers themselves.”