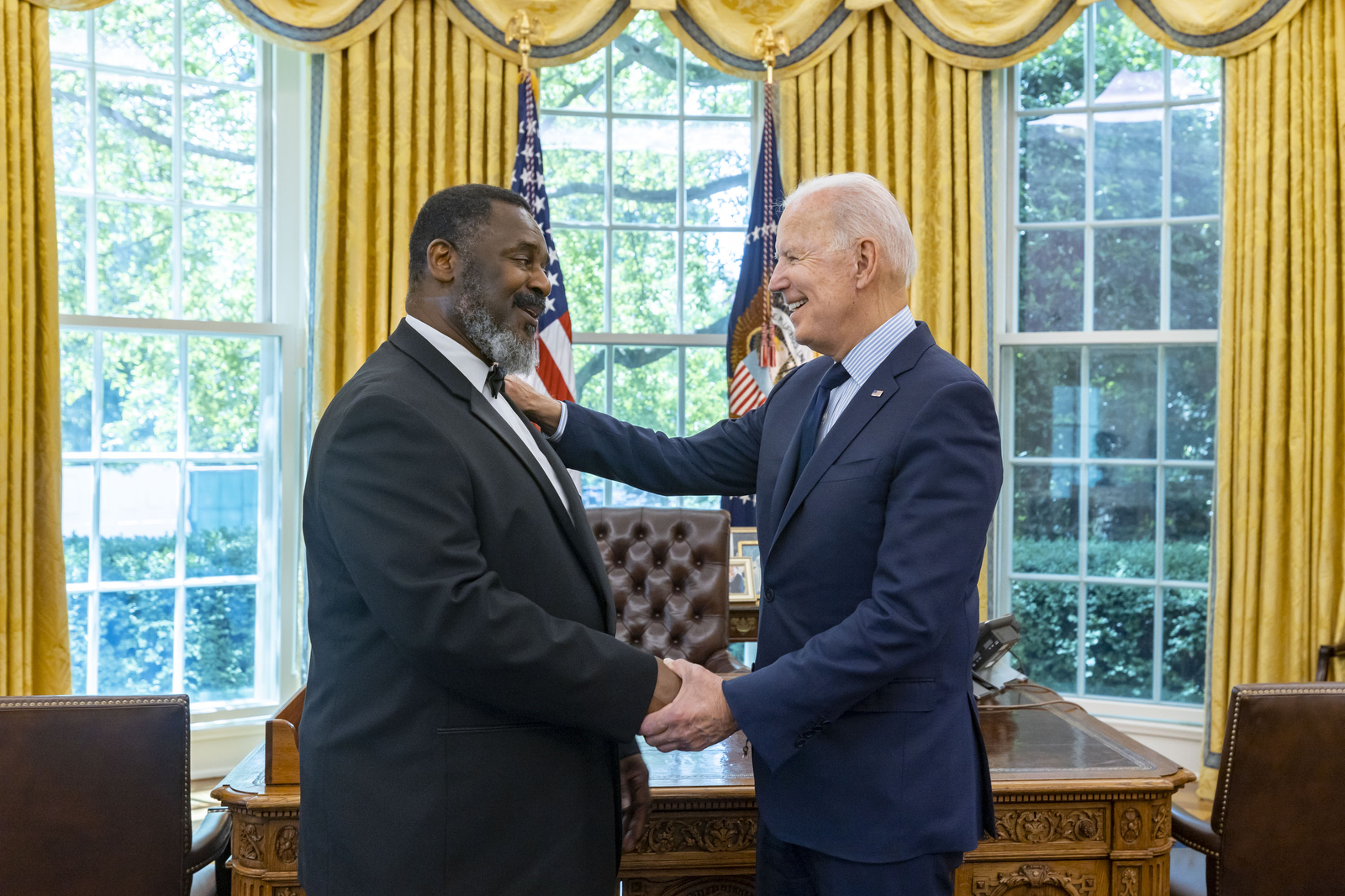 “Chuck Schumer is confronting his most daunting series of legislative landmines in his young tenure as Senate majority leader, navigating conflicting demands from his left and his moderates — all the while facing wary Republicans after years of partisan brawling with the hard-nosed New Yorker,” CNN reports.

“So the voracious, 70-year-old New Yorker has been allowing Democratic senators to have their say, greenlighting talks with Republicans, holding a string of meetings with various factions to let them air out their concerns and trying to preach one overriding message: Unity.”

Said Schumer: “We all know we’ve got to come together or nothing gets done.”

Punchbowl News: “First of all, the White House truly seems to believe a deal with the bipartisan group of 20 senators is doable and perhaps even likely. We can’t tell how much of this is sunny optimism and how much is reality.”

“The White House’s main focus this week is to try to figure out the right mix of offsets so the bipartisan group of senators will back off its insistence on hiking the gas tax and instituting a tax on miles driven by electric vehicles. These fees seem to be red lines for the administration, and the White House has made suggestions to the group on different ways to drop these provisions while continuing to pay for the entire package.”

“We got the sense yesterday that there will be a White House meeting with senators this week.”

“Schumer’s office wouldn’t say whether Schumer is also backing Sanders’ call to lower the Medicare eligibility age to 60, or even 55.”

David Dayen: “If you believe that the Senate bipartisan infrastructure proposal is just part of a whole—that some of President Biden’s spending can pass in there under regular order, and the rest in a larger reconciliation package—then you might see it as a benign way to boost Biden’s bipartisan deal-making capabilities without sacrificing anything.”

“But if you see the bill as not wholly additive but subtractive, you might reject it on its own terms.”

“The really scary piece is labeled ‘Public private partnerships, private activity bonds, and asset recycling.’ In the name of building world-class infrastructure, these lawmakers would sell it off in fire sales to private financiers. We have lots of experience with infrastructure privatization that strongly suggests it should be avoided.”

The Supreme Court sided with former college athletes in a dispute with NCAA over rules limiting certain benefits, the AP reports.

From the unanimous opinion: “Those traditions alone cannot justify the NCAA’s decision to build a massive money-raising enterprise on the backs of student athletes who are not fairly compensated.”

Playbook: “Violent crime has been spiking across America for more than a year. The issue has been at the top of the GOP agenda and constitutes a major portion of Fox News programming. We remember during the Democratic primaries that the Biden campaign was the most nimble when it came to defusing unpopular issues that titillated the progressive base of the party: abolish ICE, defund the police, decriminalize the border.”

“The White House has been very reluctant to emphasize issues outside of ending the pandemic, reviving the economy and passing its American Jobs Plan and its American Families Plan. So we think it’s notable that on Wednesday, President Joe Biden will be devoting his public events to the issue of crime and how his administration is responding to the uptick in violence. Keep an eye on this one.”

Washington Post: Joe Manchin, at the apex of his power, finds few allies in his quest for bipartisanship.

New Yorker: “In another year, the prospect of losing two Democratic senators overboard in an ice storm might be greeted with a certain wry resignation among Washington’s political class. This year, it inspires panic, at least among Democrats: in a 50-50 Senate, the Party’s agenda is only one vote—or one heartbeat—from oblivion. Manchin, in particular, holds extraordinary power. As perhaps the Senate’s most conservative Democrat, he often breaks from the Party, which gives him a de-facto veto over a large swath of the Administration’s agenda.”

Ben Smith writes in the New York Times on “one of Washington’s open secrets.”

“Mr. Carlson, a proud traitor to the elite political class, spends his time when he’s not denouncing the liberal media trading gossip with them. He’s the go-to guy for sometimes-unflattering stories about Donald Trump and for coverage of the internal politics of Fox News (not to mention stories about Mr. Carlson himself).”

“I won’t talk here about any off-the-record conversations I may have had with him. But 16 other journalists (none from The Times; it would put my colleagues in a weird position if I asked them) told me on background that he has been, as three of them put it, ‘a great source.’”

“He lied over and over and over again… poisoning our democracy, lighting a fire between Republican state legislatures who immediately launched the most sweeping voter suppression effort in at least 80 years. Just a note, how despicable a man is Donald Trump?”— Sen. Chuck Schumer (D-NY), quoted by The Hill.

“The group, Just Democracy, is spending $1.2 million for TV ads.”

Says the narrator in one ad: “As the GOP tries to silence our voices, she’s just standing by, supporting a Jim Crow relic instead.”

Said Trump: “Happy Father’s Day to all, including the Radical Left, RINOs, and other Losers of the world. Hopefully, eventually, everyone will come together!”

“Former President Trump has given at least 22 interviews for 17 different books since leaving office, with authors lining up at Mar-a-Lago as he labors to shape a coming tsunami of Trump tomes,” Axios reports. Said Jon Karl, author of the forthcoming Betrayal: “If you thought there was no more to know, it’s been mind-blowing.”

Out next week: Nightmare Scenario: Inside the Trump Administration’s Response to the Pandemic That Changed History by Yasmeen Abutaleb and Damian Paletta.

Washington Post: “The book — which draws on interviews with more than 180 people, including multiple White House senior staff members and government health leaders — offers new insights into last year’s chaotic and often-bungled response, portraying the power struggles over the leadership of the White House coronavirus task force, the unrelenting feuds that hampered cooperation and the enormous efforts made to prevent Trump from acting on his worst instincts.”

“The book offers new insights about Trump as the president careened between embracing miracle coronavirus cures in his quest for good news, grappling with his own illness — which was far more serious than officials acknowledged — and fretting about the outbreak’s implications for his reelection bid.”

“Former President Trump reportedly suggested sending Americans infected with COVID-19 to Guantanamo Bay in an effort to stem the rapidly growing number of cases on U.S. soil in the early days of the pandemic, according to a new book,” The Hill reports.

TRUMP: I’m going to lose the election because of testing! What idiot had the federal government do testing?

AZAR: Uh, do you mean Jared?

Neil Irwin: “The $1.9 trillion American Rescue Plan enacted in March, as well as a $900 billion pandemic aid package passed in December, are heavily front-loaded. They were set up to get money out the door fast. But one consequence of that strategy is that fiscal policy in the quarters ahead will subtract from economic growth.”

“There is no modern precedent for such huge swings in sums the government is pumping into the economy. And there is a risk — recently acknowledged by a top Federal Reserve official — that if pandemic-era savings are disproportionately held by the affluent, they will sit on that cash rather than spend it.”

California Gov. Gavin Newsom (D) said the state “will pay off all the past-due rent that accumulated in the nation’s most populated state because of the fallout from the coronavirus pandemic, a promise to make landlords whole while giving renters a clean slate,” the Associated Press reports.

“California has $5.2 billion to pay off people’s rent, money from multiple aid packages approved by Congress. That appears to be more than enough to cover all of the unpaid rent in the state.”

“The court trial over Missouri officials’ refusal to expand Medicaid is set to begin,” the Associated Press reports.

“Attorneys for the office have argued that because the Republican Legislature didn’t include funding to expand the program in the state budget, Parson cannot implement the expansion.”

“It’s unlikely Trump would follow the tradition of having his portrait unveiled at an East Room event hosted by his successor, given his false claims that Biden didn’t legitimately win the 2020 election… But a formal event with Obama and his wife, Michelle, is expected to take place at the White House — likely this fall.”

“The Justice Department and the FBI are investigating whether high-profile right-wing figures — including Roger Stone and Alex Jones — may have played a role in the Jan. 6 Capitol breach as part of a broader look into the mind-set of those who committed violence and their apparent paths to radicalization,” the Washington Post reports.

“The official Team Trump page is now owned by the former President’s political action committee, Save America. Save America is an entity directly controlled by Donald Trump, and Team Trump has not posted on Facebook since March 17th. These ads are in clear violation of Facebook’s policy blocking Donald Trump’s use of their platform.”

Wall Street Journal: “The Securities and Exchange Commission is preparing to require public companies to disclose more information about how they respond to threats linked to climate change—and businesses are gearing up for a fight.”

“Energy and transportation companies have told the SEC that climate disclosures could be misunderstood by investors who lack experience with the data or put too much weight on one factor, like a company’s total greenhouse-gas emissions.”

Featured Photo: President Joe Biden meets with William “Buddy” Carter during his last day before retirement on Thursday, May 27, 2021, in the Oval Office of the White House. (Official White House Photo by Chandler West)