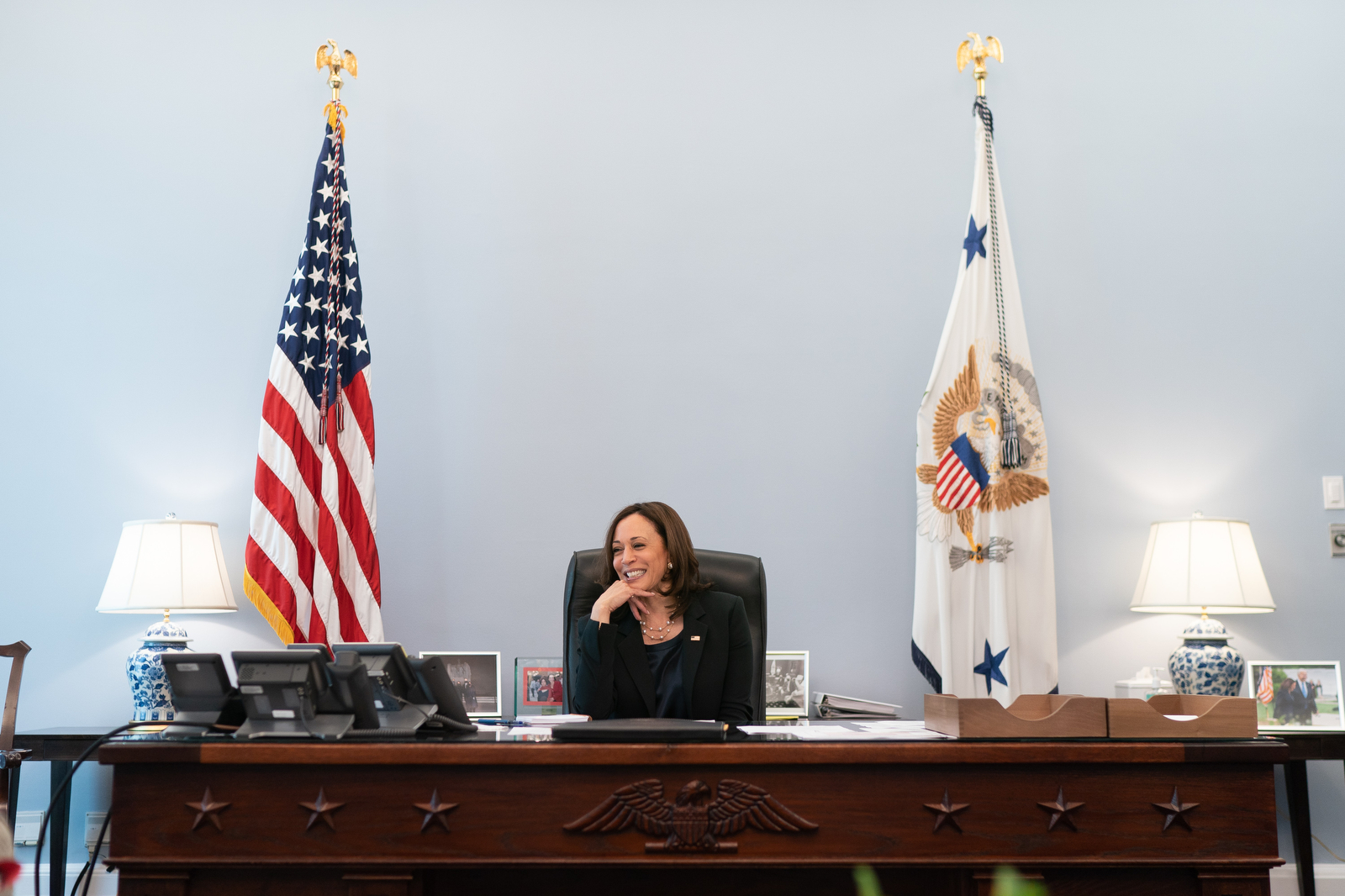 “President Biden’s approval rating has taken a dip in recent weeks — but it’s not even close to the drop in support for Congress’s performance, as negotiations over legislation in Washington have ground to a virtual standstill,” the New York Times reports.

Said Bob Shrum: “People are anxious — and look, Biden had such success at the outset with the Covid relief package that it probably got people’s expectations up very high about how much could be done and how soon. Now reality is intruding.”

Stuart Rothenberg: “Political observers all know the party holding the White House tends to fare poorly during the midterm elections. That is why the combination of redistricting and the midterm dynamic clearly benefits House Republicans next year.”

“But reapportionment and redistricting don’t affect the Senate, and more importantly, a recently developing electoral dynamic — the surge in straight-ticket voting — might improve Democrats’ chances of holding the Senate in 2022.”

GEORGIA U.S. SENATOR — Former running back Herschel Walker (R) posted a video showing off a Georgia license plate while saying, “I’m getting ready. And we can run with the big dogs.”

Greg Bluestein notes Walker has lived in Texas for decades.

Atlanta Journal-Constitution: “We never want to read too much into special legislative elections, which have notoriously low turnout. But Republicans still have to be pretty pleased with the outcomes in two contests Tuesday to fill vacant seats in the Georgia General Assembly.”

“In the rural Georgia open seat in House District 156, two Republicans are headed to a runoff, while a Democrat lagged with just 15% of the vote, underperforming Joe Biden.”

“And in the Marietta-based House District 34, vacated by former GOP Rep. Bert Reeves, GOP voters combined to amass about 60% of the tally. Biden notched about 47% in the district in November.”

Former President Donald Trump appeared to admit in a Fox News interview that he lost the presidential election.

Said Trump: “We got them by surprise in ‘16, and in ‘20 we did much better than we did in ‘16. Shockingly, we were supposed to win easily at 64 million votes and we got 75 million votes. We didn’t win, but let’s see what happens on that. The whole thing was shocking.”

Trump added that he wants Biden to do well: “I think the election was unbelievably unfair, but I want this guy to go out and do well for our country.”

“Republicans often blast Democrats for wanting to defund the police. But Democrats have a new rebuttal: The GOP won’t defend the police,” Politico reports.

“In the aftermath of the deadly Jan. 6 Capitol attack, the GOP’s love for law enforcement — a longtime hallmark of the party — is being called into question as some members on the right continue to whitewash the insurrection and even foist blame on the police officers who protected lawmakers that day.”

NEW YORK CITY MAYOR — Politico: “After six months of endless zoom forums, erratic polls and a truncated campaign season, the race remains a tossup less than a week out. With ranked-choice voting throwing more uncertainty into the process, the Democratic nominee, who is all but certain to win the general election, will likely not be named until well after Tuesday’s primary.”

Larry Sabato’s Crystal Ball: “Ranked-choice voting as well as the many twists and turns of the race makes it difficult to predict a winner in next week’s Democratic primary.”

The Republican firm Public Opinion Strategies’ survey for the Manhattan Institute, a conservative think tank, finds Adams initially edging out Garcia 21-20, with attorney Maya Wiley and 2020 presidential candidate Andrew Yang at 18% and 13%, respectively. After the pollster simulates the ranked choice process, though, it’s Garcia who emerges with a 52-48 lead over Adams in the 11th and final round of tabulations.

We also have new numbers from the Democratic pollster Change Research for New Generation of Leadership, which the newsletter Primary School says is a newly-formed PAC that appears to support Garcia. It finds Adams leading with 23% in the first round, while Garcia and Wiley tie 19-19 for second and Yang takes fourth with 12%. Change, though, also has Garcia pulling ahead as the instant runoff process proceeds, and it has her narrowly beating Adams 51-49 in the 11th round.

These results are both quite a bit different than what other recent polls have shown. Marist College recently had Adams leading Garcia by a wider 24-17 in round one and defeating her 56-44 in the last round of tabulations. Data for Progress, which supports Wiley, didn’t simulate the instant runoff process in its own poll, but it found Adams leading Wiley 26-20, with Yang and Garcia at 16% and 14%, respectively.

Georgia Secretary of State Brad Raffensperger (R) “left the door wide open to a potential state takeover of Fulton County’s election board when asked about it during a visit to South Georgia,” the Atlanta Journal-Constitution reports.

“The state’s new election law, Senate Bill 202, paved the way for state officials to intervene and eventually take over county boards that are deemed ‘underperforming.’”

Said Raffensperger: “No one wants to take over a county election board. But when you have a situation that’s gone on for 25 years, at some point, people say enough is enough.”

“Former Secretary of State Mike Pompeo is launching an organization to support Republican candidates in the 2022 midterm elections and build his national political profile, as the GOP ponders its future after the Trump administration,” Politico reports.

“The move comes as Pompeo prepares an aggressive summertime campaign schedule that will take him from Miami later this week to Southern California late next month. Pompeo is also planning a July visit to the Family Leadership Summit in Iowa, an appearance in an early voting state that is bound to heighten speculation that Pompeo is considering a 2024 presidential bid.”

“Voters across the country are moving to recall their elected officials at an unprecedented pace, driven in part by a backlash against restrictions imposed during the coronavirus pandemic and in part by anger at officials who have run afoul of culture war issues,” The Hill reports.

“At least 164 efforts to recall more than 260 local, city and state elected officials were underway across the country during the first half of the year.”

Utah state Rep. Steve Christiansen (R) trekked to Arizona last week to observe an ongoing audit of more than 2.1 million votes in Maricopa County and now says he’d like every state to conduct a similar audit of the 2020 election, the Salt Lake Tribune reports.

Rep. Steven Palazzo (R-MS) “is using campaign money to pay lawyers defending him in an investigation into whether he misspent campaign funds,” the Jackson Clarion-Ledger reports.

TENNESSEE 5TH CD — Tennessee’s conservative legislature has the power to gerrymander Democratic Rep. Jim Cooper’s reliably blue Nashville seat into a safely red seat, and one Republican is already expressing interest in running if that’s what ends up happening. Former state House Speaker Beth Harwell, who took fourth place in the 2018 primary for governor, told Tennessee Lookout that she “would have to just wait and see where I am personally and what the district lines look like before I make a decision.”

PENNSYLVANIA GOVERNOR — Republican strategist Charlie Gerow, whose work in GOP politics dates back to Ronald Reagan’s challenge to President Gerald Ford in 1976, has joined next year’s open-seat race for governor. Gerow has run for local, state, and federal office unsuccessfully at least half a dozen times, including three straight failed bids for the GOP nomination in the old 19th Congressional district in 1996, 1998, and 2000.

TEXAS 28TH CD — On Thursday, Jessica Cisneros put out a video that unsubtly hinted that she’d seek a rematch with Rep. Henry Cuellar in the 2022 Democratic primary. Cisneros literally ran across a field with her dalmatian before asking her companion if they were “ready to go again?” before taking off once more.

Last year, Cisneros held Cuellar, who is one of the most conservative Democrats in the House, to a 52-48 victory in a race that attracted national attention: Cuellar went on to prevail 58-39 against an unheralded opponent as this Laredo-based seat was shifting hard to the right from 58-38 Clinton to 52-47 Biden.

Around the same time that Cisneros hinted that she would try again, educator Tannya Benavides also announced that she’d challenge Cuellar from the left. A runoff would take place if no one won a majority of the vote in the primary.