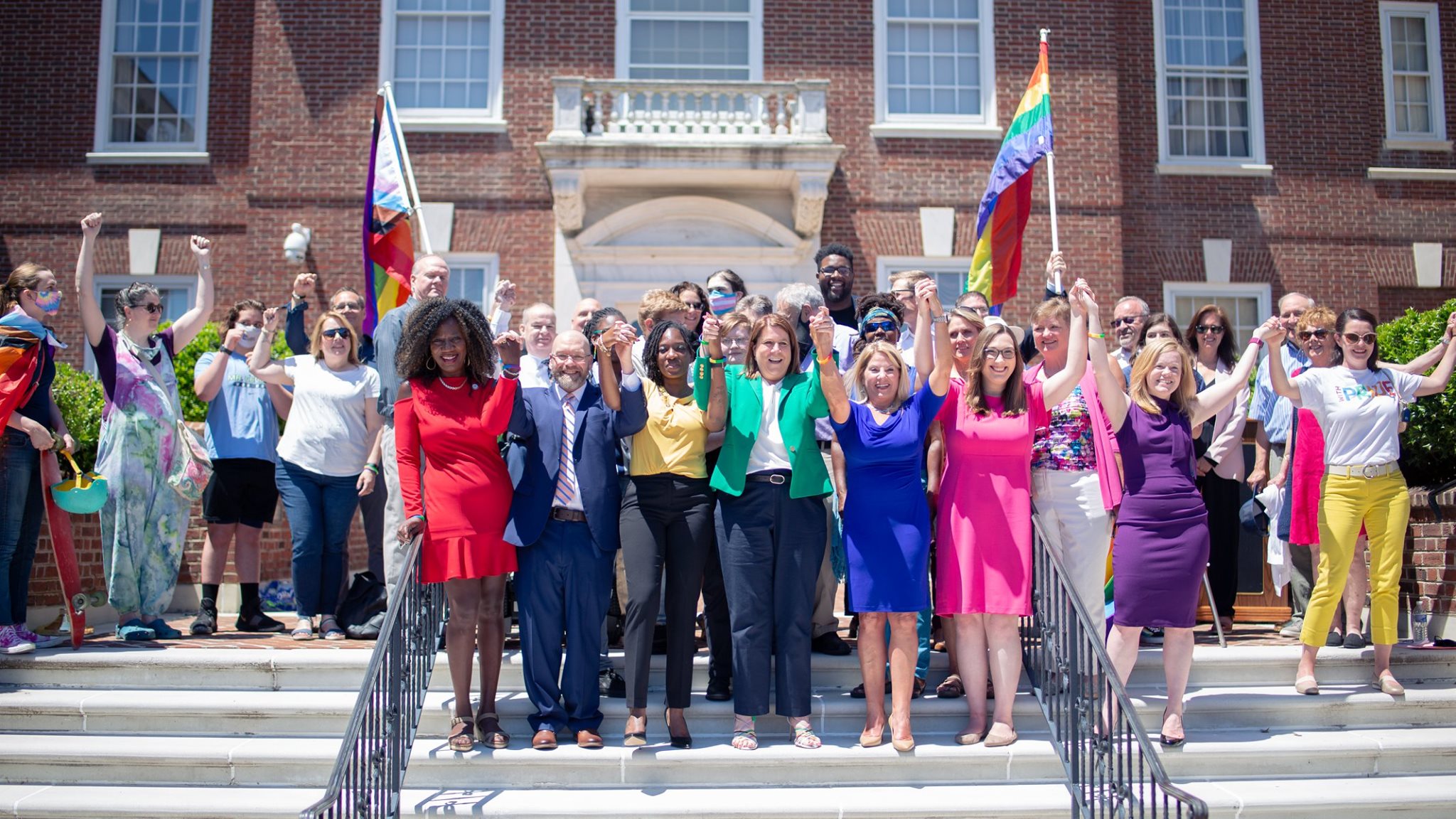 Delaware legislators yesterday introduced House Bill 199, which is the first leg of a Constitutional Amendment adding sexual orientation, gender identity, and disability to the protections enshrined in the state constitution under the Equal Rights Amendment.

Delaware would be the first state to do so. It must pass both houses of the legislature by a two thirds vote in this session (2021-22) and the next (2023-24). We will need the vote of two Republicans in the House to pass this Amendment. I suppose we can shame Mike Ramone, Kevin Hensley, Jeff Spiegelman or Bryan Shupe into voting for it. In the Senate, we need 14 votes to pass it, and we have 14 Democrats, but one of them (Bruce Ennis) tends not to vote for equality or gun safety. So we have a Republican sponsor in Senator Ernie Lopez, who presumably will be voting for it.

House Bill 199 would add “sexual orientation,” “gender identity” and “disability” to the Delaware Constitution’s equal rights clause, declaring explicitly that protection against discrimination based on these qualities is one of Delaware’s fundamental rights. The General Assembly established the equal rights clause in the state constitution in 2019 for sex, then added race, color and national origin as classifications earlier this year.

The Delaware General Assembly has enacted numerous laws during the past 12 years providing protections for LGBTQ+ residents. In 2009, the legislature prohibited discrimination based on sexual orientation, then added anti-discrimination protections for gender identity in 2013. Also in 2013, the General Assembly approved marriage equality, ensuring that all married couples have the same rights, protections, responsibilities and obligations under Delaware law.

“In my first term as a state representative, we were still debating whether gay and lesbian people should be protected from discrimination. We finally settled that question and followed up by legalizing same-sex marriage and banning discrimination based on gender identity. In 2018, we passed an Equal Rights Amendment that guaranteed equal protection regardless of sex, and in January this year, we passed another amendment enshrining race, color and national origin in our Constitution,” said House Majority Leader Valerie Longhurst, lead sponsor of the amendment.

“But our work is not done. The legislation we announce today represents an ongoing, generational effort to ensure that equality is the law of the land in Delaware, and that no legal barrier stands in the way of fair treatment for all people, without regard to any of the characteristics that make us who we are.”

“Today is a historic day to be a person with a disability and a historic day to be LGBTQ, because today we join together to rededicate ourselves to equality and to fulfil our responsibility as Delawareans to lead this country toward a fuller understanding of We The People,” said Sen. Sarah McBride, the highest-ranking transgender elected official in U.S. history.

“Across our communities, there are Delawareans who fear that who they are and what they want to be are mutually exclusive. There are still neighbors who feel unseen, unheard, and unprotected. And we can help change that,” she said. “Equal protection under the law is the foundation of our democracy, and today we come together live up to that promise, to right the wrongs of the past, to continue our long march toward liberty and justice for all and to send a life-affirming and life-saving message to thousands of young people across our state that they are seen, they are valued, and they are loved.”

“Especially as one of the first three openly LGBTQ+ individuals ever elected to the Delaware State Legislature, I’m proud to sponsor this legislation helping to ensure equality for and prevent discrimination against Delawareans regardless of their sexual orientation or gender identity,” said Rep. Eric Morrison, who is the first openly gay person elected to the House of Representatives. “Not only is the legislation itself important, but it sends a strong message to LGBTQ+ Delawareans that we are of value – especially vulnerable young people and people who are not ‘out.’ It’s also very important that this legislation protects individuals with disabilities – and as an extension, their loved ones.”

“Delaware has made tremendous progress in recent years in recognizing that people like myself not only exist, but also that our hopes, dreams and basic human rights are every bit as valid as our neighbors,” said Sen. Marie Pinkney, the first openly lesbian Black woman ever elected to the Delaware General Assembly. “But you don’t need to look any further than last week’s Senate vote on acknowledging Pride Month to know we are still not fully accepted, and in some cases barely tolerated. Despite the hatred and fear of violence that many of us are forced to live with each and every day, this amendment will go a long way toward establishing, once and for all, that we are and always will be equal in the eyes of the law here in Delaware.”

“We have a long history of mistreating and overlooking people in the disability community in this state and across the country. These people are not new to our society, but as we update laws and advance in this world, we need to continue to demand fundamental rights that they’re often deprived of,” said bill co-sponsor Rep. Kendra Johnson, who is the former executive director of Elwyn, which supports people with intellectual and developmental disabilities as well as behavioral health challenges.

“Those living with disabilities and different abilities face enough barriers and stereotypes as it is, and we can no longer afford to allow nondisabled people to dictate anything that hinders people with disabilities, their family and friends. This amendment is another step forward to positively impact those with disabilities in Delaware, so they never feel like second-class citizens.”

“I first came to Dover as an advocate in support of an amendment to the Delaware Constitution that would protect the equal rights of all women,” said Sen. Kyle Evans Gay. “Having achieved that hard-fought victory in 2019, it is both my privilege and my obligation to do everything I can to ensure no other Delawarean is ever denied equal protection under the laws of our state. This measure is about justice, it’s about fairness, and it’s about common human decency.”

HB 199 has been assigned to the House Administration Committee.